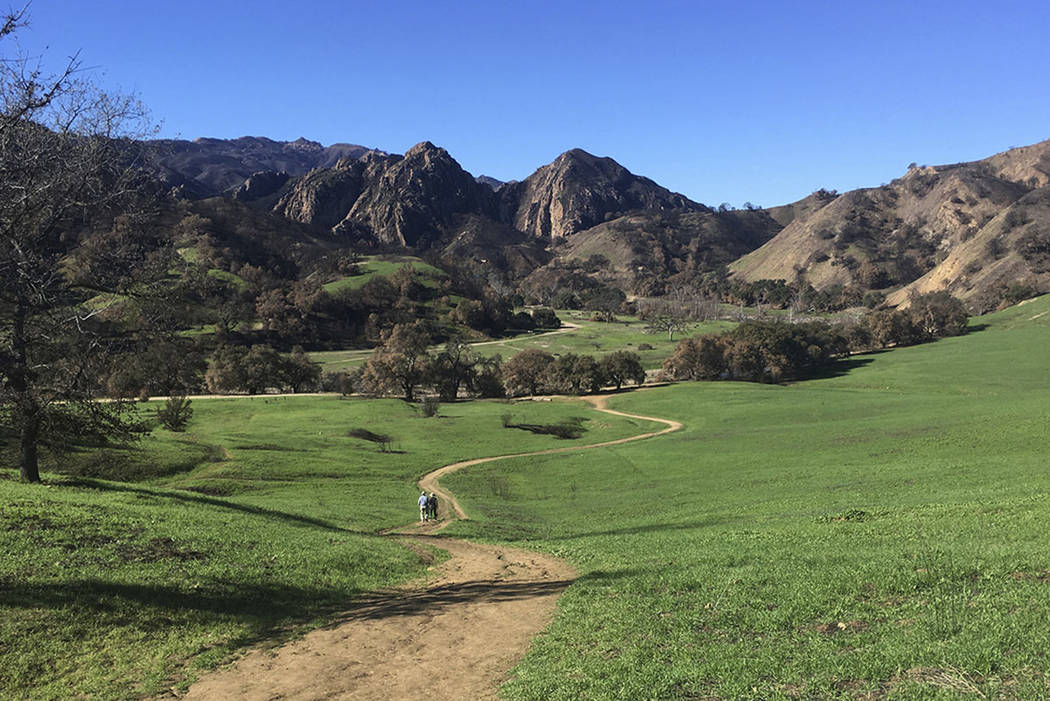 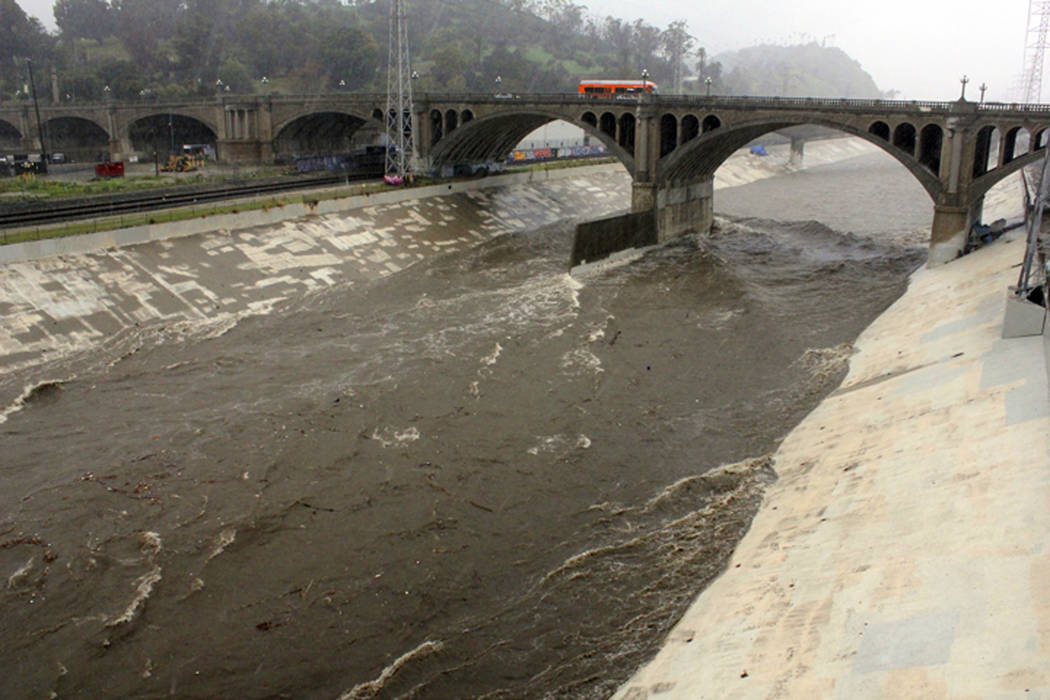 In this Feb. 2, 2019 file photo, water races down the concrete-lined channel of the swollen Los Angeles River, under the North Broadway Bridge near downtown Los Angeles, as a powerful storm drenches California. (AP Photo/John Antczak, File) 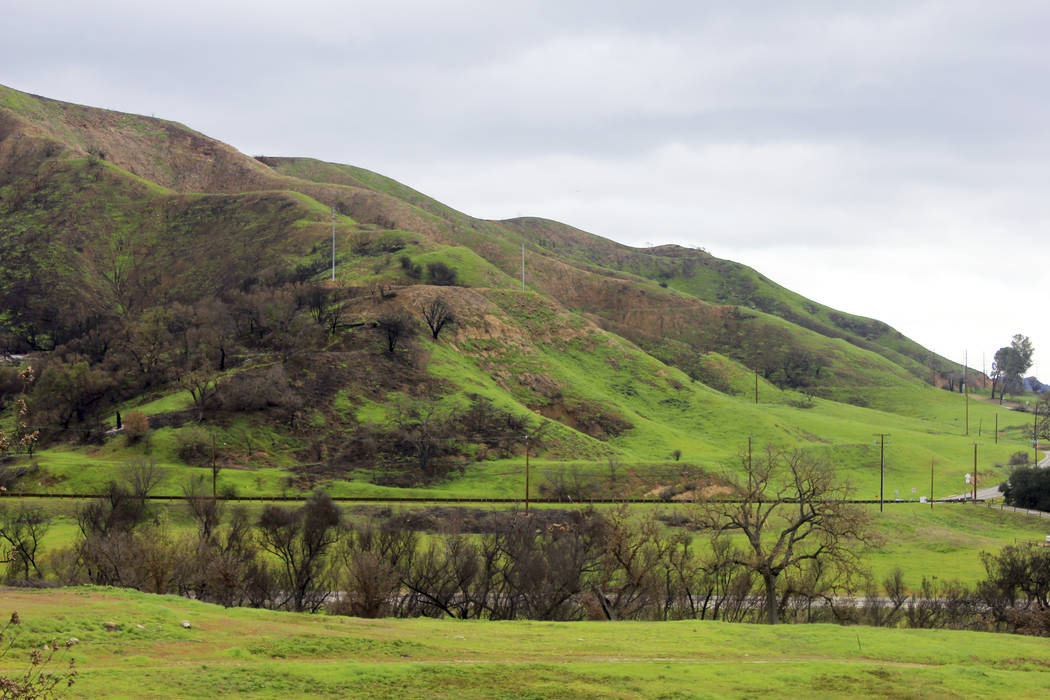 In this Feb. 17, 2019 photo, greenery has already started to sprout around charred trees and on hillsides blackened in the 2018 Woolsey wildfire that destroyed Paramount Ranch in Agoura Hills, Calif. (AP Photo/John Antczak) 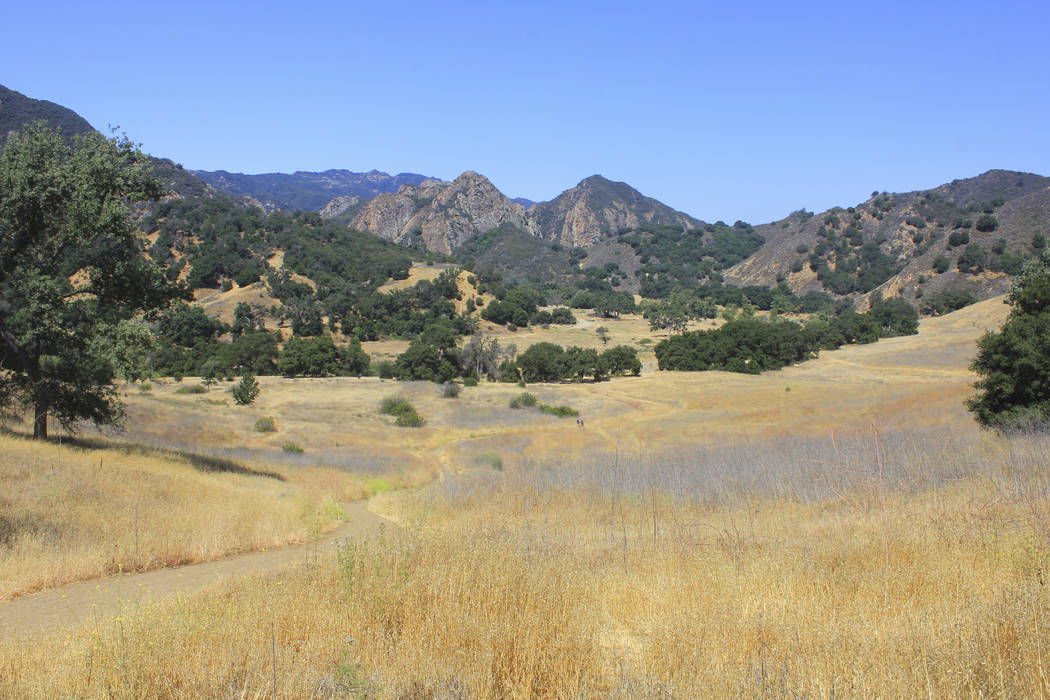 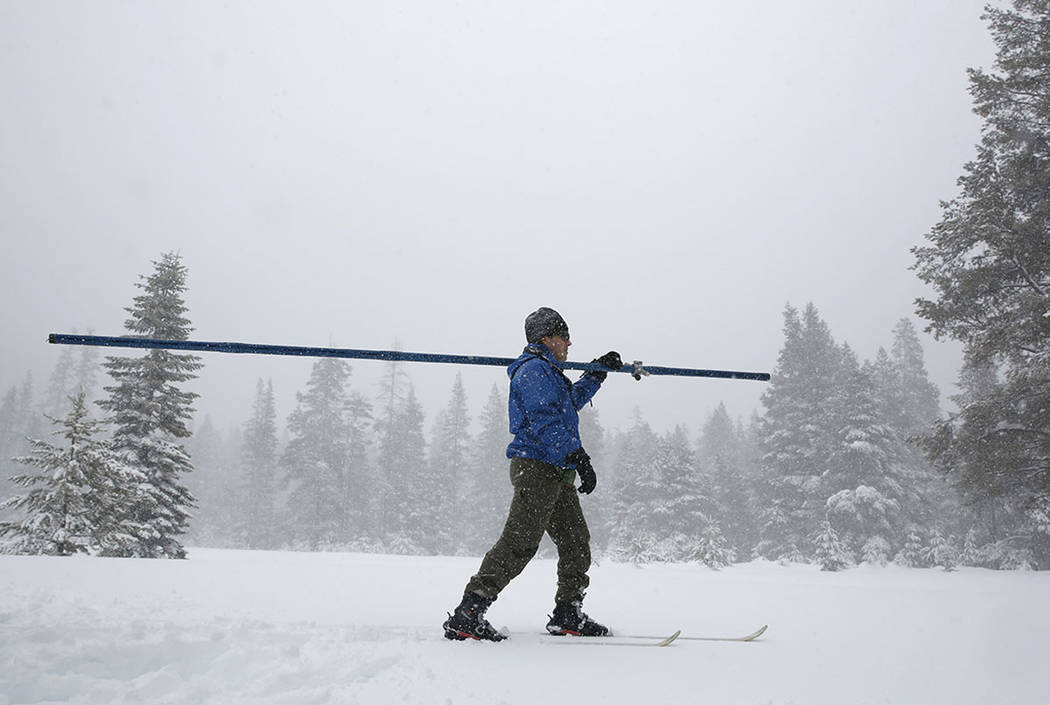 Snow falls as John King of the Department of Water Resources, crosses a meadow while conducting the third manual snow survey of the season at the Phillips Station near Echo Summit, Calif., Thursday, Feb. 28, 2019. (AP Photo/Rich Pedroncelli)

LOS ANGELES — California is drenched and its mountains are piled high with snow amid a still-unfolding winter of storms that was unimaginable just a few months ago.

Drought conditions have almost been eliminated, hills blackened by huge wildfires are sporting lush coats of green, and snow has fallen in the usually temperate suburbs of Southern California, where chilly conditions have made jackets and scarves the rule.

Indeed, downtown Los Angeles set a record Thursday for the first February without reaching at least 70 degrees in more than 140 years of record-keeping.

Also this week, a two-day storm inundated parts of wine country north of San Francisco and sent the Russian River to its highest peak in more than 20 years.

None of this was expected as recently as October, when the National Oceanic and Atmospheric Administration’s Climate Prediction Center issued its outlook for December through February.

The scenario envisioned above-average temperatures in the western U.S., continuation of drought in Southern California and only equal chances of a wet or dry year in the rest of the state.

That abruptly changed the following month as the center cited high confidence in a forecast for wetter than usual conditions in the West and predicted at least improvement if not a complete end to drought conditions throughout much of California.

Blizzards have pounded the Sierra Nevada, burying the towering mountain range in massive amounts of snow. On the eastern side of the range, for example, the Mammoth Mountain resort reported nearly 47.8 feet of snow at the summit so far this season.

While frequently disrupting travel, the storms stoked a big part of the state’s water supply — the Sierra snowpack that melts and runs off into reservoirs during spring and summer.

The California Department of Water Resources reported Thursday that the Sierra snowpack is now 153 percent of average to date.

A manual measurement at Phillips Station off U.S. 50 near Sierra-at-Tahoe found a snow depth of 113 inches (287 centimeters) and a snow water equivalent of 43.5 inches, more than double what was recorded there in January.

Phillips Station is where then-Gov. Jerry Brown attended a snowpack survey in April 2015 that found a field barren of any measureable snow. Brown later ordered Californians to use less water. On Thursday, the department was unable to livestream the measurement because stormy weather cut the cell connection.

“This winter’s snowpack gets better each month, and it looks like California storms aren’t done giving yet,” Karla Nemeth, the department director, said in a statement. “This is shaping up to be an excellent water year.”

Where it hasn’t snowed, there has been rain, and a lot of it.

Nearly 21 inches of rain fell in 48 hours this week near the Northern California wine country city of Guerneville, where the Russian River was slowly receding Thursday after extensive flooding.

Downtown Los Angeles has recorded nearly 15.8 inches of rain this season, nearly 5 inches (12.7 centimeters) above normal to date. A year ago the total was less than 2 inches. San Francisco has a similar total, nearly double last year’s.

The water resources department said the state’s six largest reservoirs are holding between 84 percent and 137 percent of their historical averages to date.

The U.S. Drought Monitor reported Thursday that more than 87 percent of California was now free of any level of drought or unusual dryness. Just 2.3 percent — along the Oregon border — was in moderate drought, and the remainder was in a condition called abnormally dry.

Three months ago, nearly 84 percent of the state was in moderate, severe or extreme drought, and the rest was abnormally dry.

In October, NOAA said forecasters expected a weak El Nino, the weather-influencing warming of the Pacific Ocean, to be in place by late fall or early winter.

NOAA, however, didn’t confirm the arrival of the El Nino until Feb. 14.

An agency assessment last week said heavy rain over the previous 30 days was due to a series of atmospheric rivers fueled by a combination of El Nino conditions and a lesser-known atmospheric phenomena called the Madden-Julian Oscillation.

A NOAA fact sheet describes it as a “tropical disturbance that propagates eastward around the global tropics with a cycle on the order of 30-60 days.” One of its most significant U.S. impacts during winter is an increase in the frequency and intensity of heavy precipitation along the West Coast.