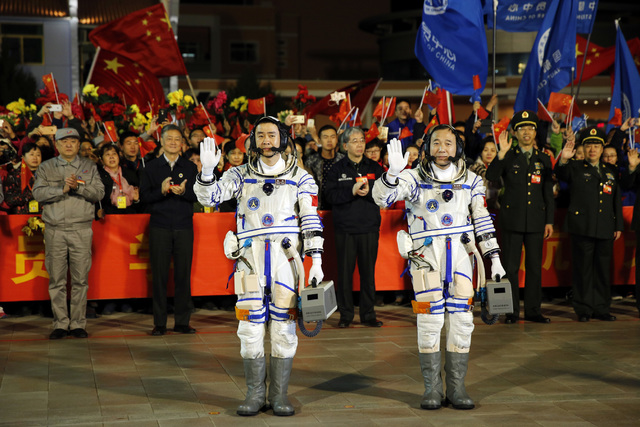 Chinese astronauts Jing Haipeng, right, and Chen Dong, wave farewell before being launched into space. The astronauts will dock with an experimental space station and stay there for 30 days to test the complex's ability to support life in deep space. (Chinatopix via AP) 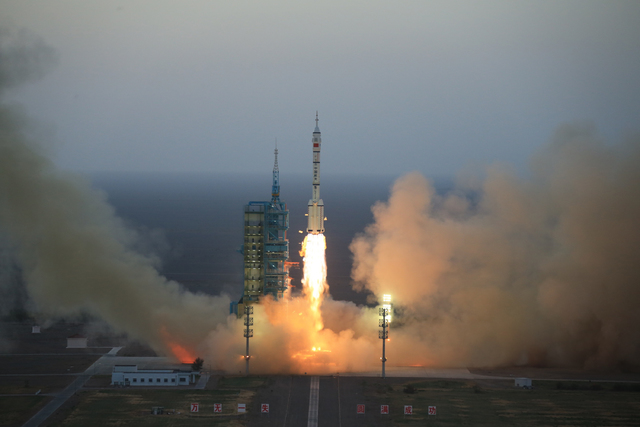 In this photo provided by China's Xinhua News Agency, the Long March-2F carrier rocket carrying China's Shenzhou 11 spacecraft blasts off from the launch pad at the Jiuquan Satellite Launch Center in Jiuquan, northwest China's Gansu Province, Monday, Oct. 17, 2016. China has launched a pair of astronauts into space on a mission to dock with an experimental space station and remain aboard for 30 days. (Li Gang/Xinhua via AP) 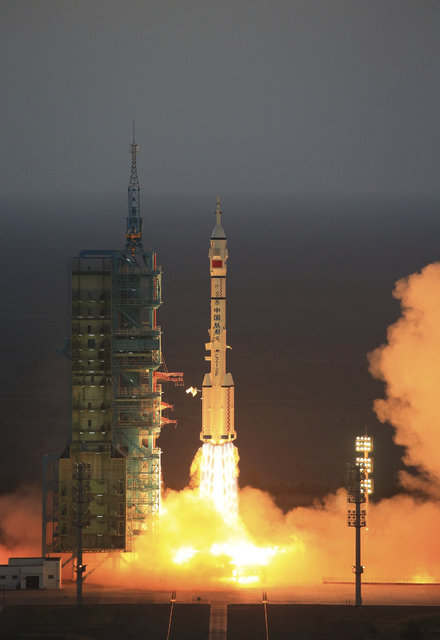 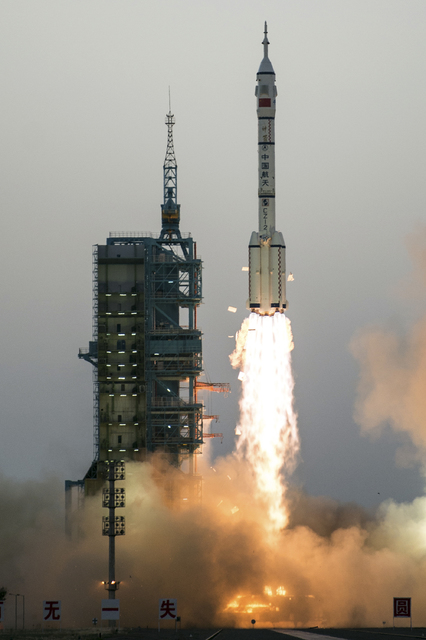 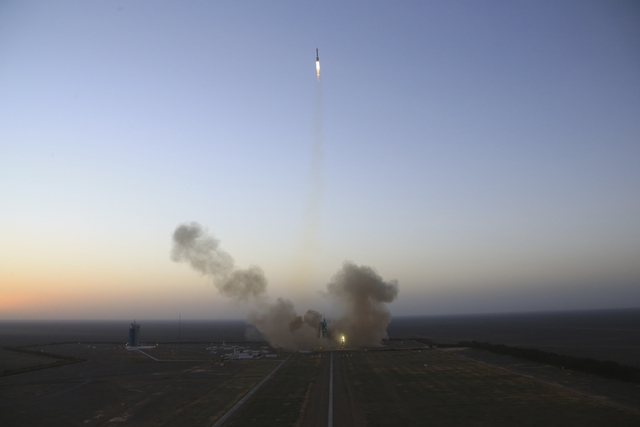 BEIJING — China launched a pair of astronauts into space Monday on a mission to dock with an experimental space station and remain aboard for 30 days in preparation for the start of operations by a full-bore facility six years from now.

The Shenzhou 11 mission took off from the Jiuquan Satellite Launch Center on the edge of the Gobi Desert in northern China at 7:30 a.m. aboard a Long March-2F carrier rocket.

It will dock with the Tiangong 2 space station precursor facility within two days, conduct experiments in medicine and various space-related technologies, and test systems and processes in preparation for the launching of the station’s core module in 2018.

Premier Li Keqiang and propaganda chief Liu Yunshan visited the Beijing control center to congratulate staff. It is the sixth time China has launched astronauts into space and the duration will be the longest by far.

Following the attachment of two experiment modules, the completed station is set to begin full operations in 2022 and will run for at least a decade.

An earlier Tiangong 1 experimental space station launched in 2011 went out of service in March after docking with three visiting spacecraft and extending its mission for two years. The Tiangong, or “Heavenly Palace,” stations are considered stepping stones to a mission to Mars by the end of the decade.

The Shenzhou 11 astronauts are Jing Haipeng, who is flying his third mission, and 37-year-old Chen Dong.

“It is any astronaut’s dream and pursuit to be able to perform many space missions,” Jing, who turns 50 during his time in space, told a briefing Sunday.

China conducted its first crewed space mission in 2003, becoming only the third country after Russia and the U.S. to do so, and has since staged a spacewalk and landed its Yutu rover on the moon. Administrators suggest a crewed landing on the moon may also be in the program’s future.

China was prevented from participating in the International Space Station, mainly due to U.S. concerns over the Chinese space program’s strongly military character. Chinese officials are now looking to internationalize their own program by offering to help finance other countries’ missions to Tiangong 2.

China’s space program also opened its massive fourth spacecraft launch site at Wenchang on China’s southernmost island province of Hainan in June. It was inaugurated with the launch of the newly developed Long March 7 rocket that was hailed as a breakthrough in the use of safer, more environmentally friendly fuels.

China also plans to land a rover on Mars by 2020, attempting to recreate the success of the U.S. Viking 1 mission that landed a rover on the planet four decades ago.

A source of enormous national pride, China’s space program plans a total of 20 missions this year at a time when the U.S. and other countries’ programs are seeking new roles.