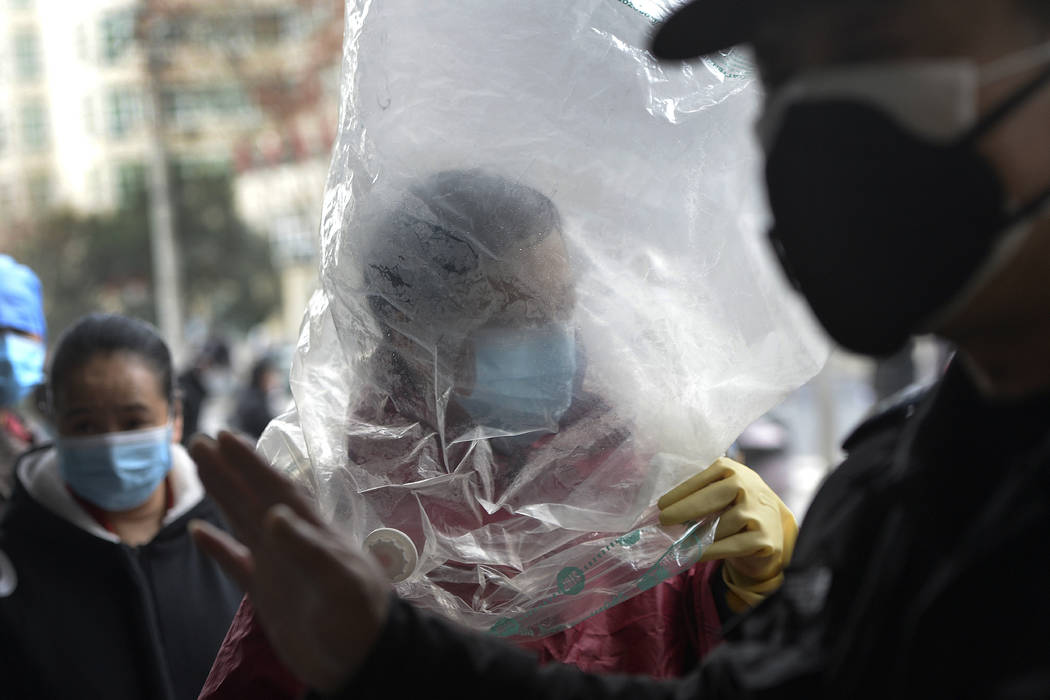 A man wearing a protective face mask covered himself with a plastic cover before enters a supermarket in Wuhan in central China's Hubei province, Monday, Feb. 10, 2020. China reported a rise in new virus cases on Monday, possibly denting optimism that its disease control measures like isolating major cities might be working, while Japan reported dozens of new cases aboard a quarantined cruise ship. (Chinatopix via AP) 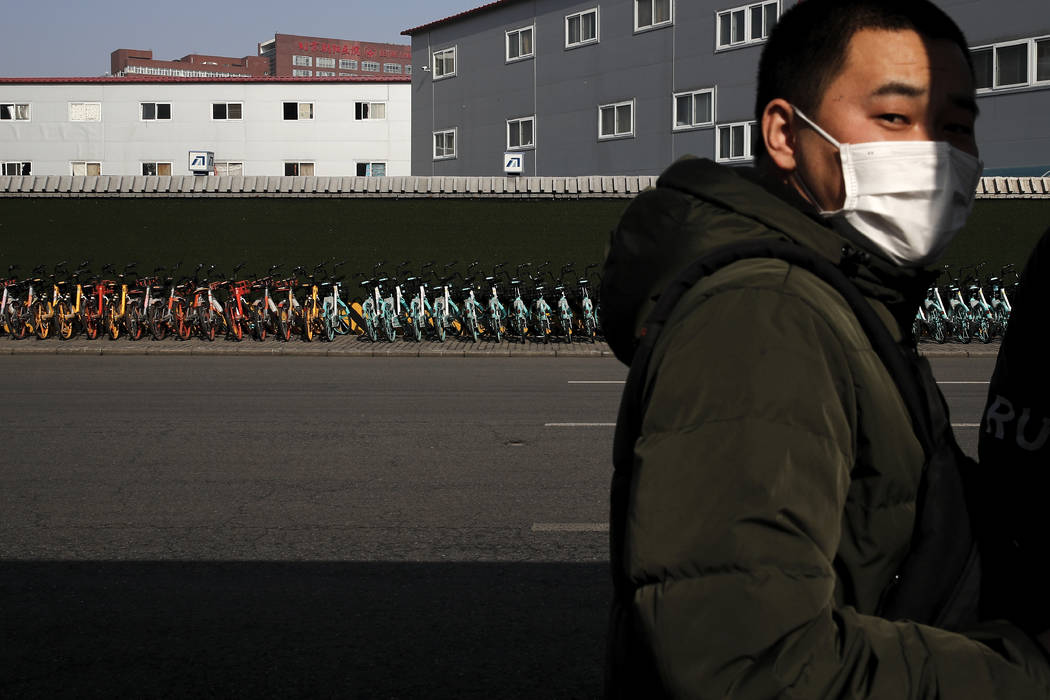 A man wearing a mask stands near a pile of bicycles from bike-sharing companies parked outside a subway station in Beijing, Monday, Feb. 10, 2020. China reported a rise in new virus cases on Monday, possibly denting optimism that its disease control measures like isolating major cities might be working, while Japan reported dozens of new cases aboard a quarantined cruise ship. (AP Photo/Andy Wong) 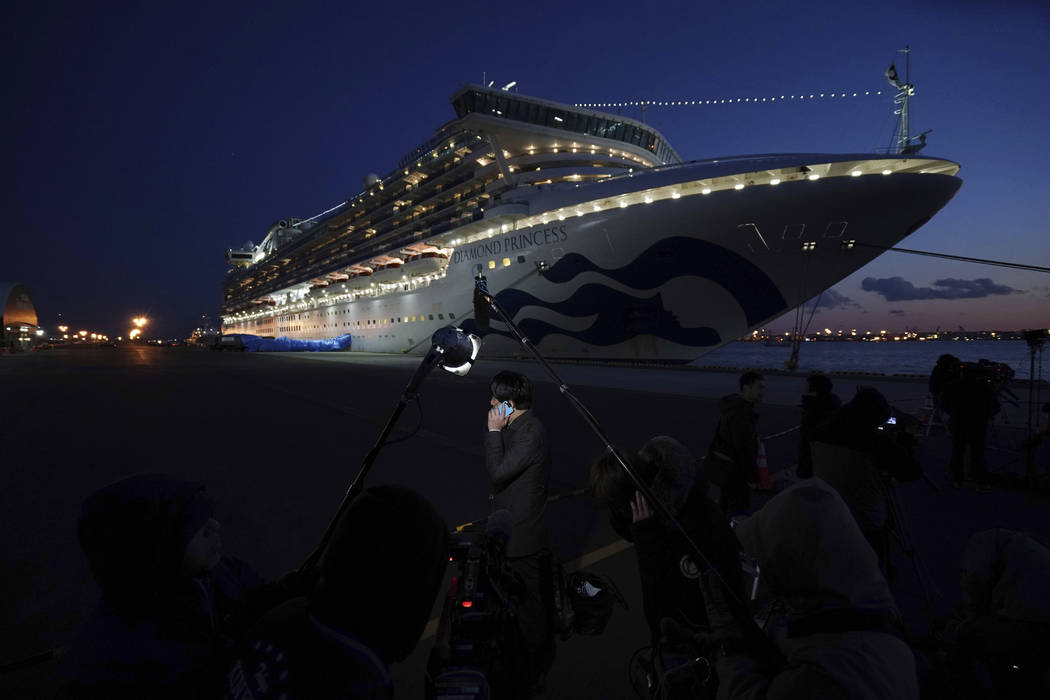 Journalists work near the quarantined Diamond Princess cruise ship sitting at the Yokohama Port Monday, Feb. 10, 2020, Yokohama, Japan. The operator of the ship said Monday that an additional 66 cases were found aboard. That is in addition to 70 reported earlier. (AP Photo/Eugene Hoshiko) 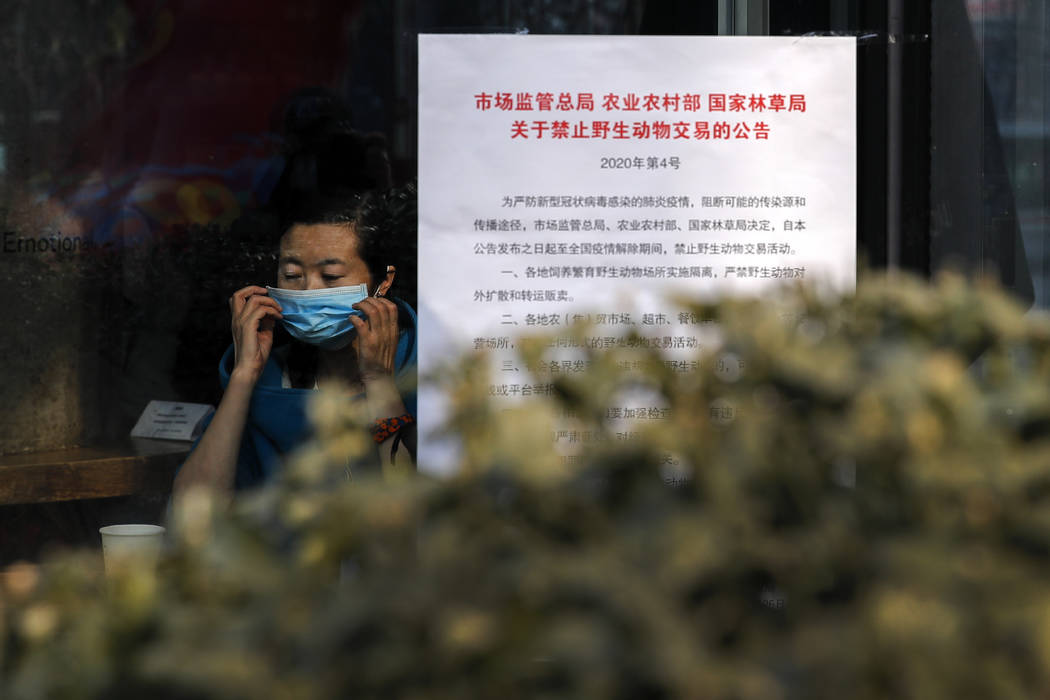 A woman puts on a mask near a notice board that reads "Bans on wild animals trading following the coronavirus outbreak" at a cafe in Beijing, Monday, Feb. 10, 2020. China reported a rise in new virus cases on Monday, possibly denting optimism that its disease control measures like isolating major cities might be working, while Japan reported dozens of new cases aboard a quarantined cruise ship. (AP Photo/Andy Wong) 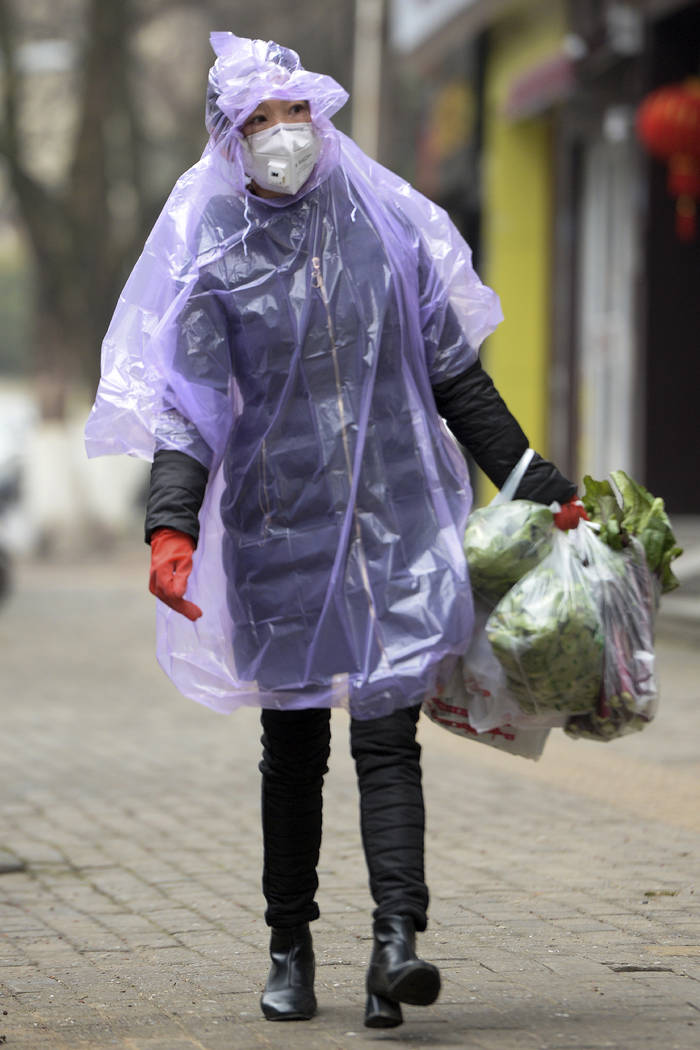 BEIJING — China reported a rise in new virus cases Monday, denting optimism that disease control measures including isolating major cities might be working, while the operator of a cruise ship in Japan reported dozens of new cases.

Britain declared the virus an “imminent threat” and said it would forcibly detain infected people if necessary. France tested 45 children and their parents after five British tourists contracted the virus at a ski resort.

More Chinese workers and shoppers went back to offices and markets following the Lunar New Year, which was extended to discourage travel and reduce the risk the virus might spread.

China reported consumer inflation spiked to an eight-year high in January, possibly boosted by panic buying and hoarding as word of the outbreak and anti-disease measures spread.

The mainland death toll rose by 97 to 908 in the 24 hours through midnight Sunday and 3,062 new cases were reported.

That was up 15% from Saturday and broke a string of daily declines. A government spokesman had said Sunday those declines showed containment measures were successful.

The fatality toll has passed the 774 people believed to have died in the 2002-03 epidemic of severe acute respiratory syndrome, another viral outbreak that originated in China. The total of 40,171 cases on the mainland vastly exceeds the 8,098 sickened by SARS.

More than 440 cases have been confirmed outside mainland China, including two deaths in Hong Kong and the Philippines.

China has built two hospitals and sent thousands of extra doctors, nurses and other health care workers to Wuhan, the city of 11 million people in central China that is the epicenter of the outbreak. Most access to Wuhan was suspended Jan. 23. Restrictions have spread to cities with a total of 60 million people.

Global stock markets slid following warnings that investor optimism that the disease and its economic impact were being brought under control might be premature.

Japan’s health ministry said an additional 65 cases were found aboard a cruise ship quarantined in Yokohama, south of Tokyo, raising the total to 135.

The operator of the ship earlier reported 66 new cases, but the ministry said one person may have been counted twice.

Health Minister Katsunobu Kato said the Japanese government was considering testing all 3,711 passengers and crew on the Diamond Princess, which would require them to remain aboard until results are available. Health authorities are scrambling to deliver medicine requested by more than 600 passengers.

“We are doing the utmost to keep everyone in good health,” Kato said.

The British government declared the virus a “serious and imminent threat to public health,” which it said gives authorities powers to forcibly detain infected people if necessary.

The change comes after a British man who caught the virus in Singapore in January appeared to be linked to at least seven other confirmed cases in Europe.

Five Britons, including a 9-year-old boy, contracted the virus in the French Alpine ski town of Contamines-Montjoie after staying in the same chalet as the British man.

French medical authorities tested 45 children and their families Sunday from the area and temporarily closed three schools where the boy spent time.

More Chinese went back to work following the Lunar New Year holiday, which was extended to discourage travel in an attempt to contain the virus.

Zhang Peng, who works for a livestreaming company in Beijing, went to the office for the first time since the holiday. The company checked employees for fever and handed out masks.

“I thought the situation is fairly good now,” Zhang said. “I went to work by subway today and underwent various checks in the station. And my company did a good job of prevention and control.”

Iris Ke, who works for an advertising company, said she plans to wait until next week to go back to the office.

“We just need to have a little more sense of self-protection,” said Ke. “Life goes on anyway. How come we stop going outside or stop working simply because of fear of disease? We can’t do that.”

At the Sanyuanli market in Beijing, the Chinese capital, shoppers in face masks mixed with delivery drivers who were collecting orders of meat, fruit and vegetables. Stalls were stocked with pork, mutton, seafood and vegetables.

“The number of customers here is down a lot, maybe by more than half,” said Liu Ying, who sells walnuts, cashews and other specialties. “But you can see a lot of people calling in orders, so we’re slowly getting busy again.”

The Beijing city government told residential compounds in the capital to close their gates, check visitors for fever and record their identities, newspapers reported. Many apartment complexes already have taken such steps on their own.

A city official was cited as saying entertainment venues should close. A government statement told the public to “strictly abide by” regulations requiring wearing of masks in public and to avoid group activities.

Consumer inflation spiked to an eight-year high of 5.4% over a year earlier in January, driven by a 4.4% rise in food costs, the government reported. Food prices rose 1.4% from the previous month.

“It appears that supply disruptions and hoarding due to the coronavirus outbreak helped to keep food prices elevated during the week after Chinese New Year, when they would normally drop back,” Julian Evans-Pritchard of Capital Economics said in a report.

China’s central bank announced a 300 billion yuan ($43 billion) fund to make low-interest loans to producers of medicine and medical supplies or other companies involved in fighting the virus.

Over the weekend, the government promised tax cuts and subsidies to farmers, supermarkets, producers of medical supplies and companies that contribute to anti-disease work.

China’s leaders are trying to keep food flowing to crowded cities despite the anti-disease controls and to quell fears of possible shortages and price spikes following panic buying after most access to Wuhan and nearby cities was cut off.

Organizers of the Hong Kong Arts Festival canceled all of its more than 120 planned music, dance and drama performances, including two concerts by the Boston Symphony Orchestra. The festival was due to start this week and run through mid-March.