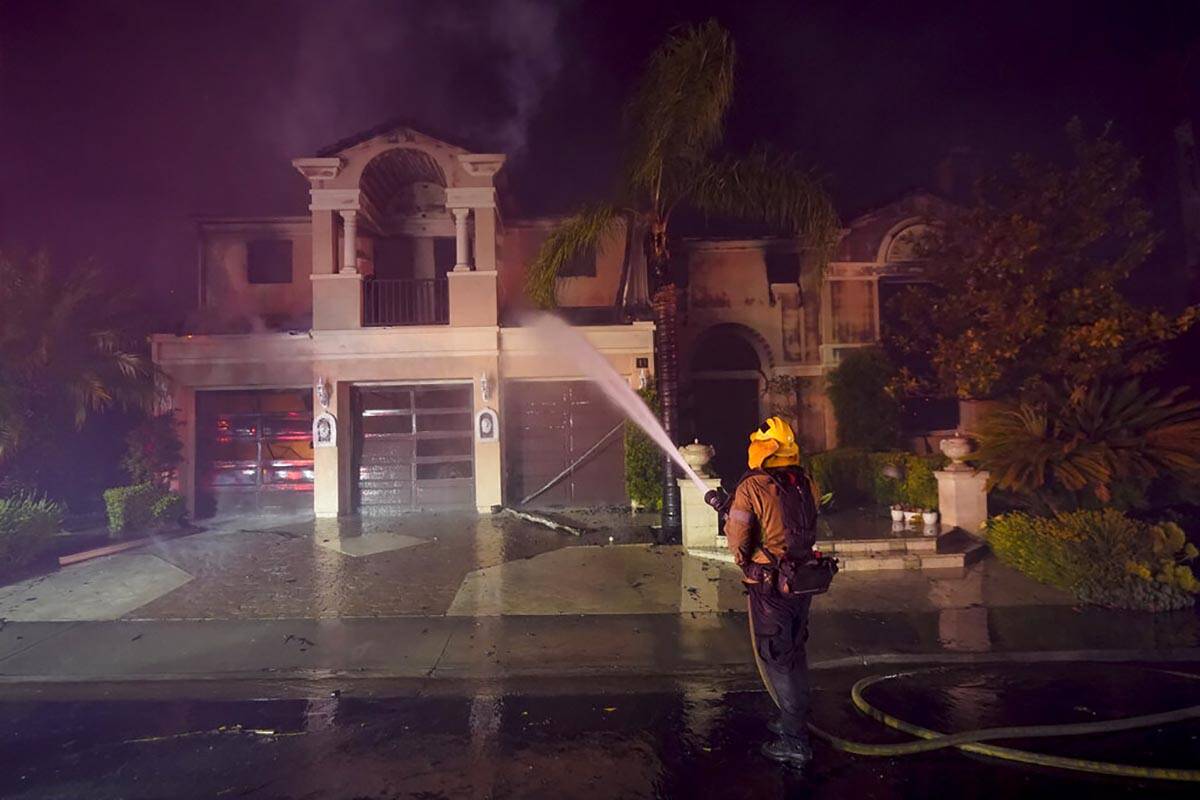 A firefighter works to put out a structure burning during a wildfire Wednesday, May 11, 2022, in Laguna Niguel, Calif. (AP Photo/Marcio J. Sanchez) 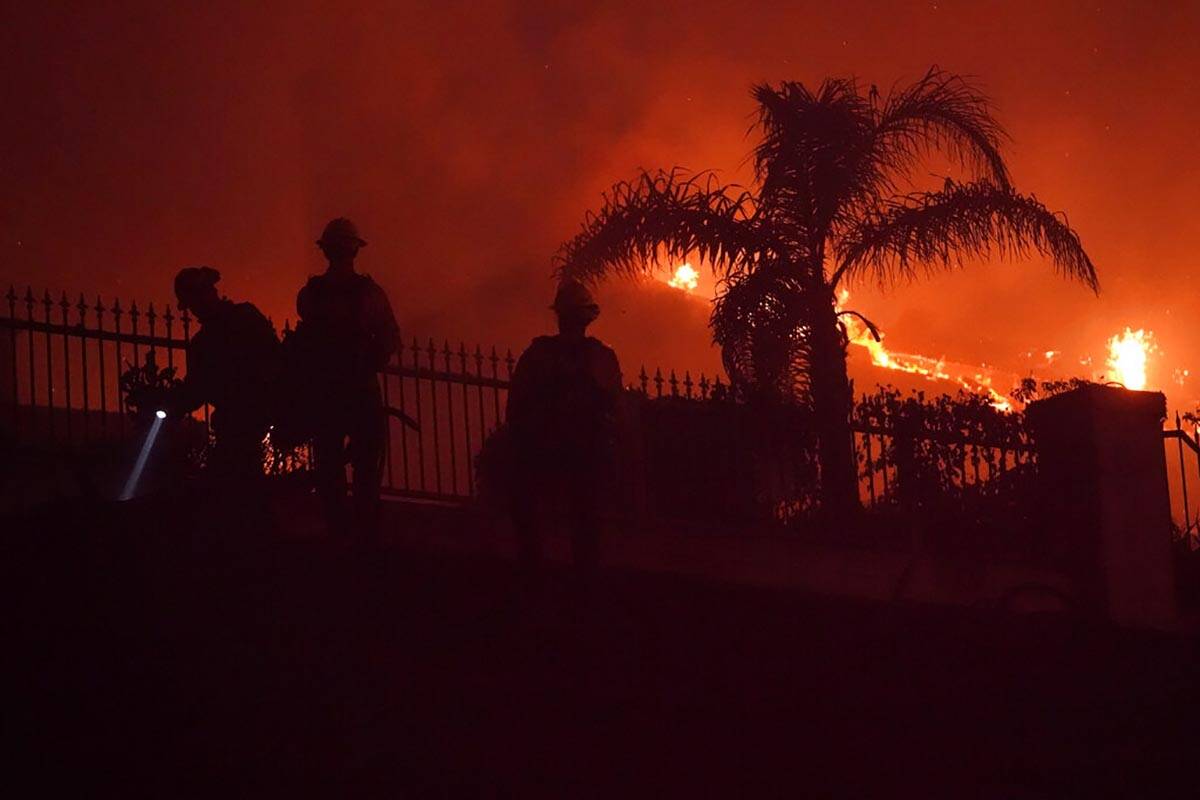 Firefighters work to put out a structure burning during a wildfire Wednesday, May 11, 2022, in Laguna Niguel, Calif. (AP Photo/Marcio Jose Sanchez) 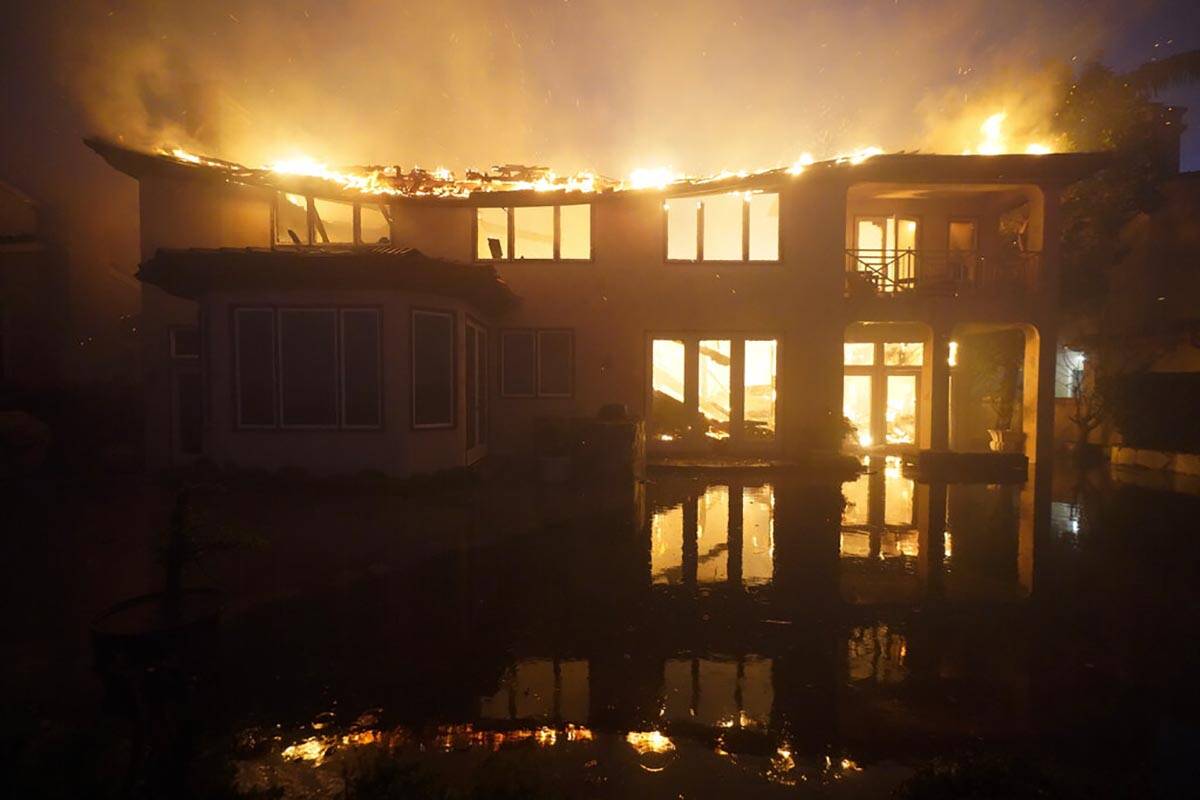 A structure burns during a wildfire Wednesday, May 11, 2022, in Laguna Niguel, Calif. (AP Photo/Marcio Jose Sanchez)

LOS ANGELES — A brush fire fueled by intense coastal winds roared into an upscale Laguna Niguel subdivision Wednesday evening as it ballooned to about 200 acres, burning at least 20 homes and forcing many to flee.

Cold winds coming from the Pacific Ocean pushed the Coastal fire up a rugged canyon, sending embers into homes and sparking spot fires in the Coronado Pointe area.

Television footage showed a row of sprawling, red-tiled homes at the tip of the canyon on fire, with smoke coming from several other homes deeper in the neighborhood.

Orange County Fire Authority Chief Brian Fennessy said at a Wednesday night news conference that an estimated 20-plus homes had been destroyed. Winds had died down a bit, Fennessy said, but not before pushing the blaze to 200 acres.

The fire raced through coastal bluffs of multimillion-dollar mansions, officials said. The flames were fanned by gusty ocean winds but they were dying down Wednesday night. No injuries were reported but several streets were ordered evacuated.

Fennessy said climate change has made even small fires that once would have been easily contained into extreme threats to life and property throughout the West.

The destruction underscored the year-round danger of fires in Southern California, even in cool conditions. Unlike many wildfires in the region, the Coastal fire was fanned not by Santa Ana winds from the desert but by strong gusts coming from the Pacific Ocean.

The National Weather Service recorded strong ocean winds throughout Wednesday afternoon across Orange County, including gusts as high as 30 mph in parts of the county, said Brandt Maxwell, a weather service meteorologist in San Diego.

The winds blew in with a dry air mass and didn’t carry much moisture, and humidity remained low, which probably helped spread the flames, Maxwell said.

Sara Nuss-Galles watched the fire grow from her ridgetop home on Via Estoril in Laguna Niguel for more than an hour Wednesday afternoon before deciding it was time to leave. Plumes of smoke choked the hillsides as ash fell across the city.

“My clothes smell from the hour I spent in the house,” she said. “It’s just plumes of smoke. It’s very scary.”

Nuss-Galles and her husband, Arie Galles, grabbed a few personal items and their two cats, Pitzel and Ketzel, and drove to a friend’s home a few miles away.

Along the way, they saw people parked along the sides of the roads, standing on the beds of their pickup trucks and in their trunks watching the fire.

Around 5:30 p.m., sheriff’s deputies went door to door in her neighborhood to tell people to evacuate.

By around 7 p.m., hundreds of homes in Laguna Niguel had been evacuated. The blaze broke out in Aliso Canyon, near the South Orange County Wastewater Authority treatment plant.

Authorities blocked off the street to other traffic and were also blocking off Nyes Place.

“It’s so heartbreaking,” said Orange County Supervisor Lisa Bartlett, whose district includes Laguna Niguel. “It started as three to five acres and then it went to 40 acres in like a millisecond and went out of control from there.”

The wind has been one factor in the spread, but the size of the homes has also made containing the blaze difficult, Bartlett said.

“When you take a look at the size of the homes, there’s just so much combustible material that they burn fast, and then the wind starts and the flames can just leap from house to house,” she said.

With very little rainfall across the county, dry vegetation also may have fueled the fire’s spread, said the weather service’s Maxwell.

“I guess it’s just disheartening that we’re already seeing a fire that’s this aggressive and it’s only May,” he said. “Usually this is something that we see later on in the summer and especially in fall.”

Visibility in the firefight has been hampered by wind-driven smoke, Bartlett said, adding that she knew firefighters were doing everything possible from the ground and air.

The winds pushed the fire into the Coronado Pointe neighborhood so fast that residents fled without having time to grab many items, she said.

“People really need to heed that message because it’s so difficult for firefighters when they’re trying to put out fires and also save people who have stayed in their houses when they should have gone,” Bartlett said. “The last thing we want is for anybody to have their life in danger.”

At an evacuation site set up at the Crown Valley Community Center, people gathered to watch the fire on a television.

Tim White, 54, fled his Laguna Niguel house with his wife. He said he lives in the Monarch Summit neighborhood, south of the fire, and decided to evacuate Wednesday before the order came.

“My wife and I were home working and we heard the plane flying overhead and we thought, ‘That’s a low plane,’” White said, standing outside the community center with his 17-year-old daughter.

It was a plane dropping fire retardant.

“We walked down the block and we saw the smoke and flames, and we bugged out,” White said. “I’m trying to remain calm. The helicopter reports look like they’re in our favor.”

Snacks and water bottles were on hand at the center, and a separate room was opened for evacuees with pets.

Among them was Cindy Kramer, 55, who evacuated with her mother from her home in the Niguel Summit neighborhood near the fire, but the home so far was unaffected.

“Our place wasn’t mandatory evacuation, but everyone was leaving,” she said.

A 15-year resident of the neighborhood, Kramer packed clothes, passports and phones and set off, unsure of when it would be safe to return home or where she would spend the night.

“We have friends in the area,” she said. “Lucky I got gas this morning too.”

When Ginger Stickney got a call about the growing blaze around 4:30 p.m. she rushed home from her job in Orange, calling a family member while on the road who fetched her elderly cat, Indy, and her laptop.

“You’re trying to be calculating — figuring out what’s most urgent to do — while being calm at the same time,” said the audiologist, who has lived in Laguna Niguel since 2013. “When I left for work this morning, there was no fire. Who knows what will go down in the next hours.”

Stickney’s neighbors up the hill along Pacific Island Drive had evacuated, and she didn’t wait for the exit orders.

After a quick stop to fill up her car with necessities, she took refuge with her son and other family, and began monitoring the news.

“We’re going to have a glass of wine, eat some pizza and try to decompress. My sister was just calling me to talk about summer travel. I told her what’s happening and she right away sent me a Red Cross list of what to do,” she recalled, half laughing, “half stressing,” as she described it.