Two Obama-era national monuments in the Silver State would be dramatically scaled back if the Trump administration follows a recommendation from 17 congressional Republicans, including Nevada Rep. Mark Amodei.

In a letter to Interior Secretary Ryan Zinke, members of the all-GOP Congressional Western Caucus urged the reduction or repeal of 19 of the 22 monuments currently under review by the Trump Administration.

The 704,000-acre Basin and Range National Monument in remote Lincoln and Nye counties doesn’t deserve to be any bigger than “approximately 2,500 acres in our estimation,” the Western Caucus members wrote.

They went on to argue that Gold Butte National Monument in northeastern Clark County should be “confined to the smallest area compatible with proper care and management of the objects to be protected,” but they offered no specifics on how much of its 297,000 acres should be carved away.

The letter’s only detailed suggestion for Gold Butte came in the form of a quote from former Rep. Cresent Hardy, R-Nev., who previously said that perhaps 50 to 100 acres were all that were needed to protect Native American petroglyphs in that area.

According to Amodei and company, President Barack Obama only designated the monument late last year as a favor to then-Sen. Harry Reid, D-Nev., and an act of “political retribution” against the Bundy family, which has illegally grazed cattle in the area for decades.

Longtime Las Vegas conservationist John Hiatt was part of a dedicated group of people who spent years lobbying for the protection of Gold Butte. He laughed at the idea that the monument was created by the president to settle a grudge against some ranchers. “That’s just nonsense,” Hiatt said.

On the chopping block

The 17 representatives who signed the June 30 letter are also calling for nine monuments to be rescinded altogether, four of them in Arizona, two in Utah and one each in California, Maine and Oregon.

Eight other monuments — four in California, two in New Mexico, one in Idaho and one in Montana — should be chopped down in size “in coordination with state and local stakeholders,” the caucus members say.

Only three of the 22 national monuments currently under review by order of President Donald Trump should be spared from any boundary changes under the recommendations from the congressional Republicans: Sand to Snow in California, Canyons of the Ancients in Colorado and Hanford Reach in Washington. 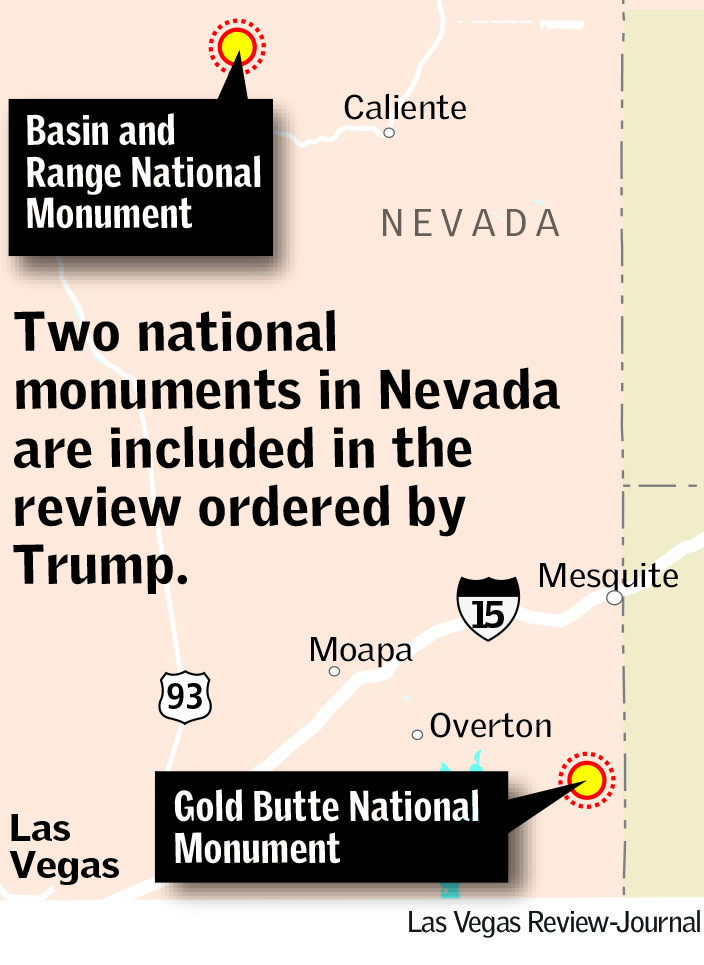 Trump gave Zinke until Aug. 24 to recommend possible action on any monuments created by presidential decree since Jan. 1, 1996, that he deems too large or too restrictive to public access or economic development. Five marine national monuments in the Atlantic and Pacific oceans are also under review in a separate but related process.

More than 1.2 million comments were submitted during the public input period for the review, which ended Monday. The vast majority of the comments came from people, Hiatt among them, who said they opposed the review and wanted the monuments kept as they are.

He said many of these national monuments are vast for a reason. “If you’re going to protect something , the context in which it exists is almost as important as the object itself,” Hiatt said. “That’s particularly true of cultural features.”

Some decisions already made

The Congressional Western Caucus members consider the monument review a much-needed check on executive overreach. “Over the past 20 years, presidents from both sides of the aisle have used the stroke of a pen to unilaterally lock up hundreds of millions of acres using the oft-abused Antiquities Act” of 1906, their letter states. “We ask that the department commit to working with Congress to rein in this outdated law.”

It’s unclear how much influence the congressional letter will have on Zinke, who has promised to visit Gold Butte and Basin and Range in person this month before passing judgment on the two Nevada monuments.

Though Zinke agreed with caucus members that Hanford Reach should be left unchanged, he bucked their suggestion that Craters of the Moon in Idaho be scaled back and Bears Ears in Utah eliminated outright.

Instead, he is recommending no changes for Craters of the Moon and an as-yet-unspecified boundary reduction for Bears Ears.