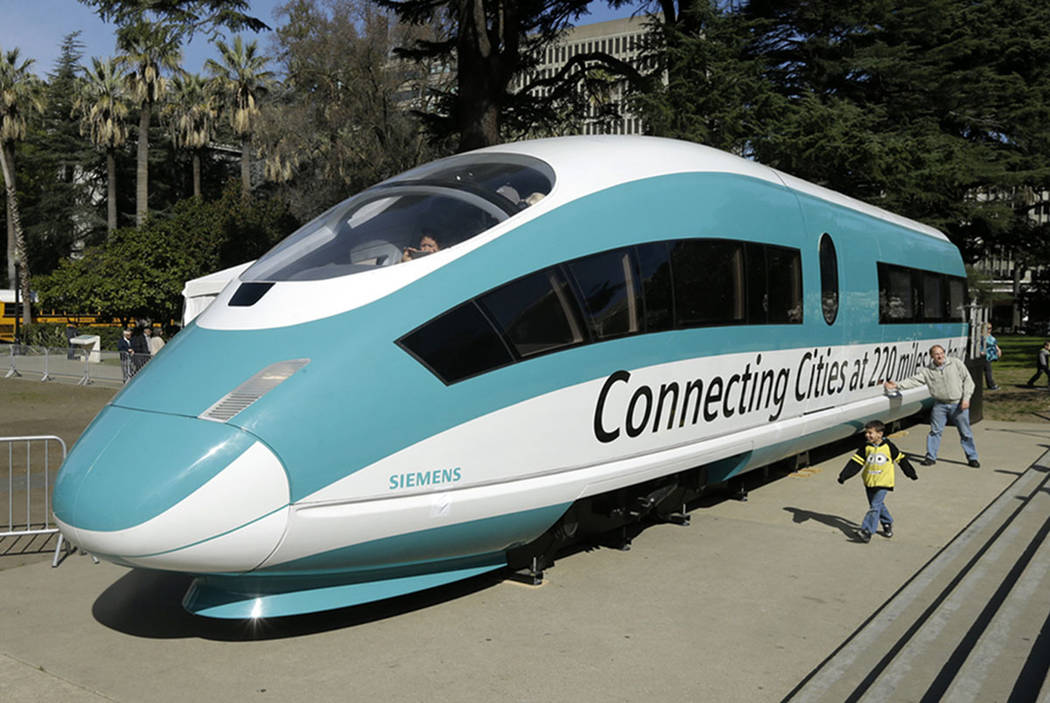 This Feb. 26, 2015 photo shows a full-scale mock-up of a high-speed train, displayed at the Capitol in Sacramento, Calif. (AP Photo/Rich Pedroncelli, file) 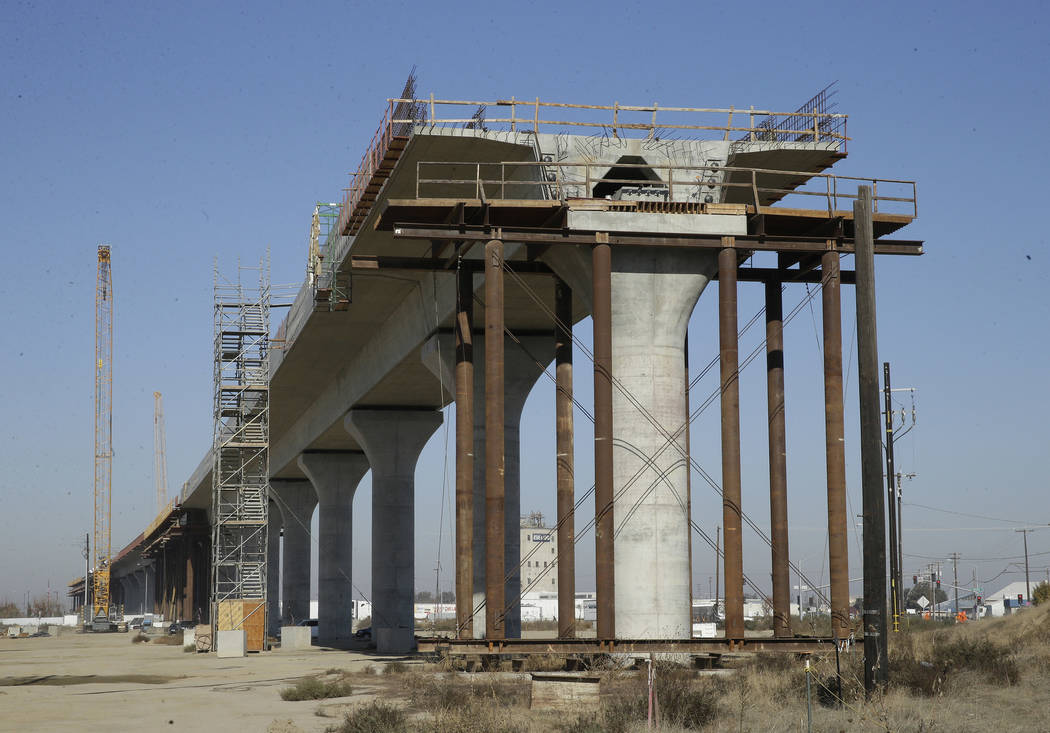 This Dec. 6, 2017, photo shows one of the elevated sections of the high-speed rail under construction in Fresno, Calif. (AP Photo/Rich Pedroncelli) 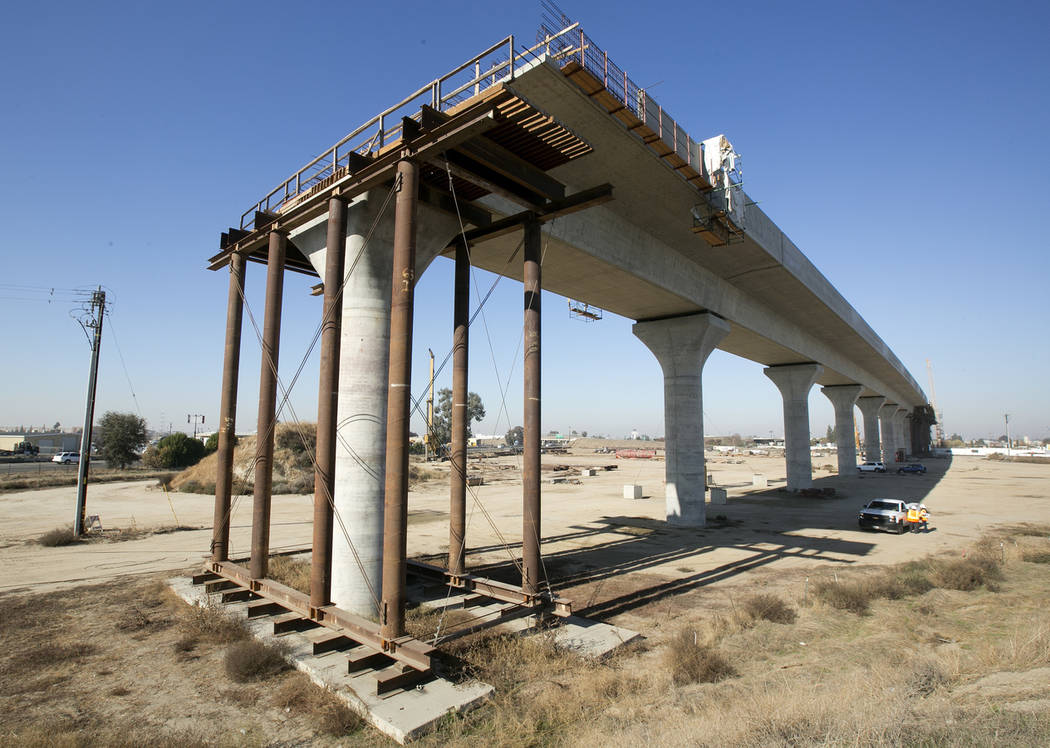 This Dec. 6, 2017, photo shows one of the elevated sections of the high-speed rail under construction in Fresno, Calif. (AP Photo/Rich Pedroncelli)

The project is now estimated to cost $77 billion and is 15 years from completion.

State auditor Elaine Howle faulted the California High-Speed Rail Authority for starting limited construction in 2013 before it completed critical tasks like buying land, relocating utilities or obtaining agreements from outside groups including local governments and other railroad operators.

That led to numerous contract changes, project delays, and overruns that have led to a nearly doubling of the original cost estimate of $40 billion.

The audit cited more than $2 billion in current or expected contract changes on three active Central Valley projects that originally were expected to cost about $3 billion. Meanwhile, delays have pushed back completion estimates on those projects from this year to 2022.

“Insurmountable funding shortfalls, continued mismanagement and hugely flawed assumptions mean this project is dead in the water,” Patterson said. “There will never be a completed track from the Bay Area to Los Angeles. … The best we can hope for is a rump railroad running from Bakersfield to Madera.”

The project, backed by then-Gov. Arnold Schwarzenegger and approved by voters in 2008, has been the subject on many lawsuits and strident opposition from Republicans and some Democrats, who see it as an unnecessary money pit.

But Gov. Jerry Brown has been steadfast with his support even as costs ballooned and the completion estimate drifted past the 2029 target.

Governor-elect Gavin Newsom, a fellow Democrat, was strongly for it in 2008, turned lukewarm later as costs rose and now says he supports it but is concerned there’s no plan in place to pay for the increased cost.

The audit criticized the project’s convoluted management system in which 56 people manage hundreds of contracts worth more than $5 billion, yet just three contract managers have that role full time and there is high turnover and little oversight of the others.

Many of the others are outside consultants who “may not have the best interests of the state as their primary motivation,” auditors said, noting that the authority often “relied on the contractors’ own estimates and projections of the associated costs and delays.”

Authority board member Mike Rossi said it accepts auditors’ recommendations, which he said are similar to problems the board already identified. He said in a statement that the authority “is making great progress.” The challenge, he said, has been to improve while construction is already underway on projects delayed by funding restrictions and lawsuits.

Board members knew the risks of starting construction before planning was completed but had to move quickly to gain federal funding, he said.

The authority now risks having to repay $3.5 billion in federal funds if it doesn’t work twice as fast over the next four years to meet the federal deadline, auditors said. The U.S. Department of Transportation is separately examining the Federal Railroad Administration’s oversight of that money.

The authority has $28 billion to complete segments in the Central Valley and between San Francisco and Gilroy, but not enough money to connect them or complete the rest of the system, auditors said.

To succeed, the project needs more money from state lawmakers and private money to pay for drilling tunnels through mountain passes.

If completed, it would be the nation’s fastest train, carrying people between Northern and Southern California in less than three hours. Proponents say the project would connect the crowded, affluent San Francisco Bay Area to commuters in the more affordable Central Valley.