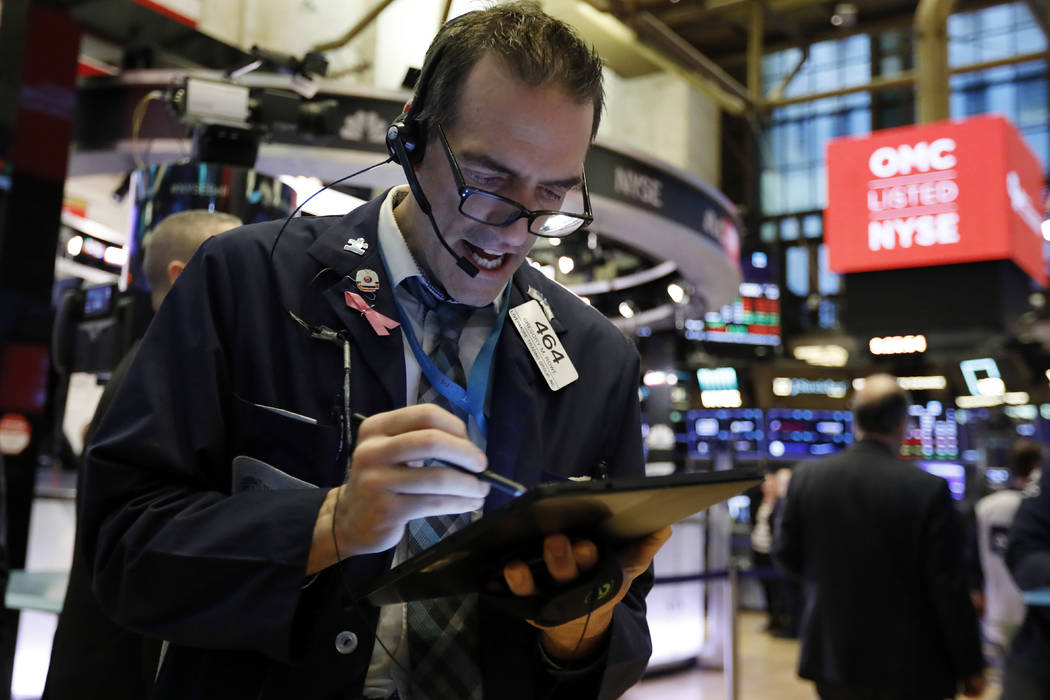 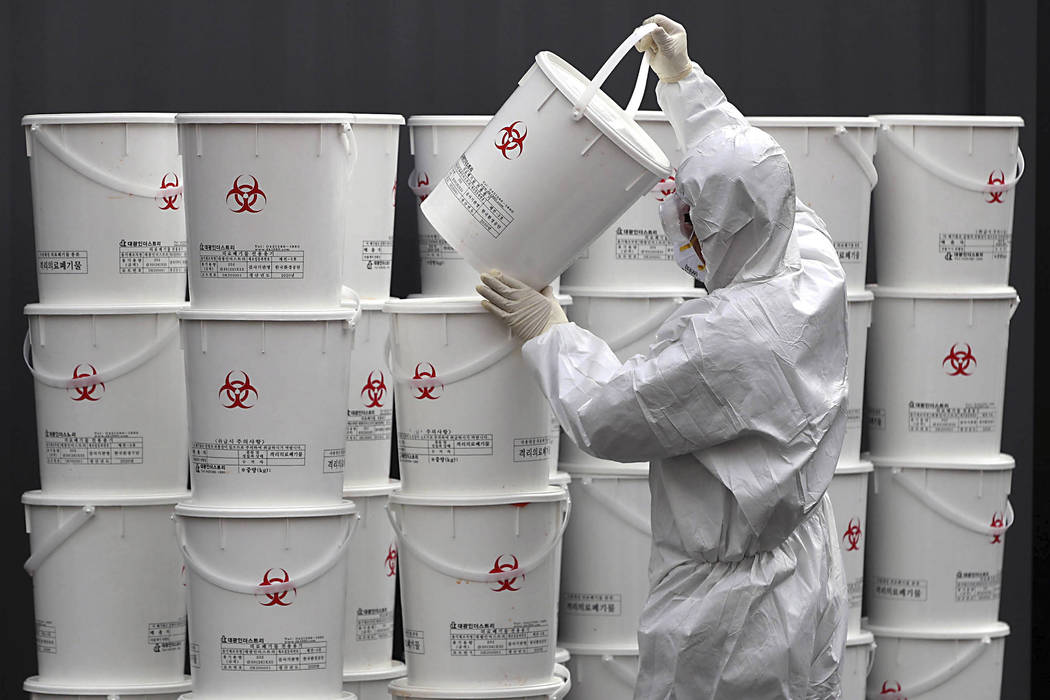 A worker in protective gear stacks plastic buckets containing medical waste from coronavirus patients at a medical center in Daegu, South Korea, Monday, Feb. 24, 2020. South Korea reported another large jump in new virus cases Monday a day after the the president called for "unprecedented, powerful" steps to combat the outbreak that is increasingly confounding attempts to stop the spread. (Lee Moo-ryul/Newsis via AP) 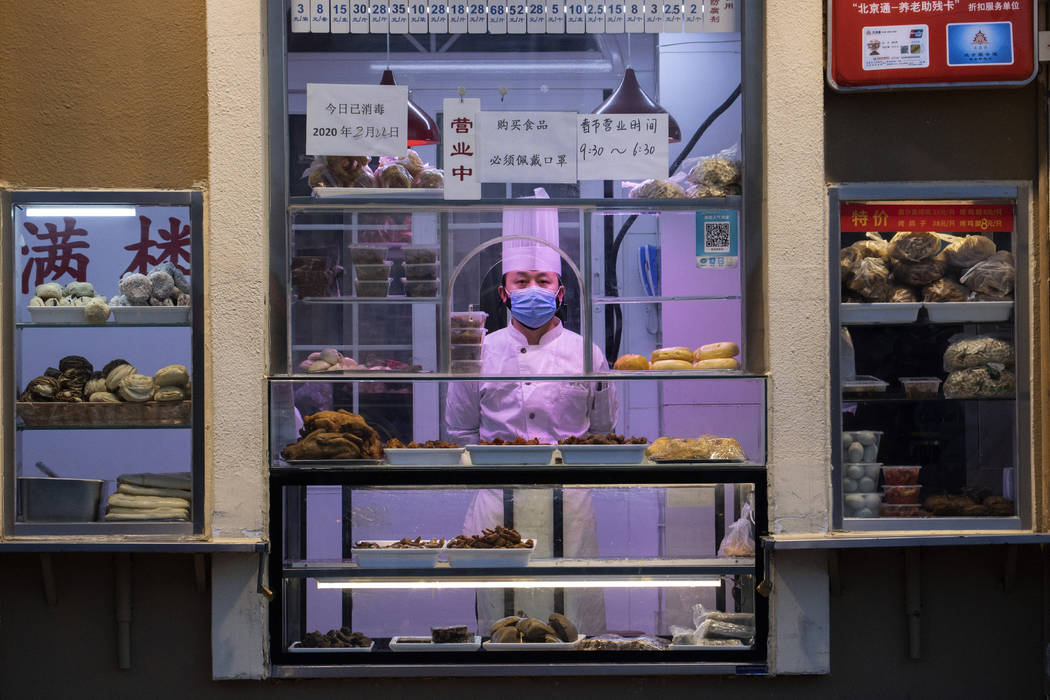 a chef looks out from behind a display of food products at a restaurant in Beijing, China, Saturday, Feb. 22, 2020. Regulators on Monday promised tax cuts and other aid to help companies recover from China's virus outbreak and expressed confidence the ruling Communist Party's growth targets can be achieved despite anti-disease controls that shut down much of the economy. (AP Photo/Ng Han Guan) 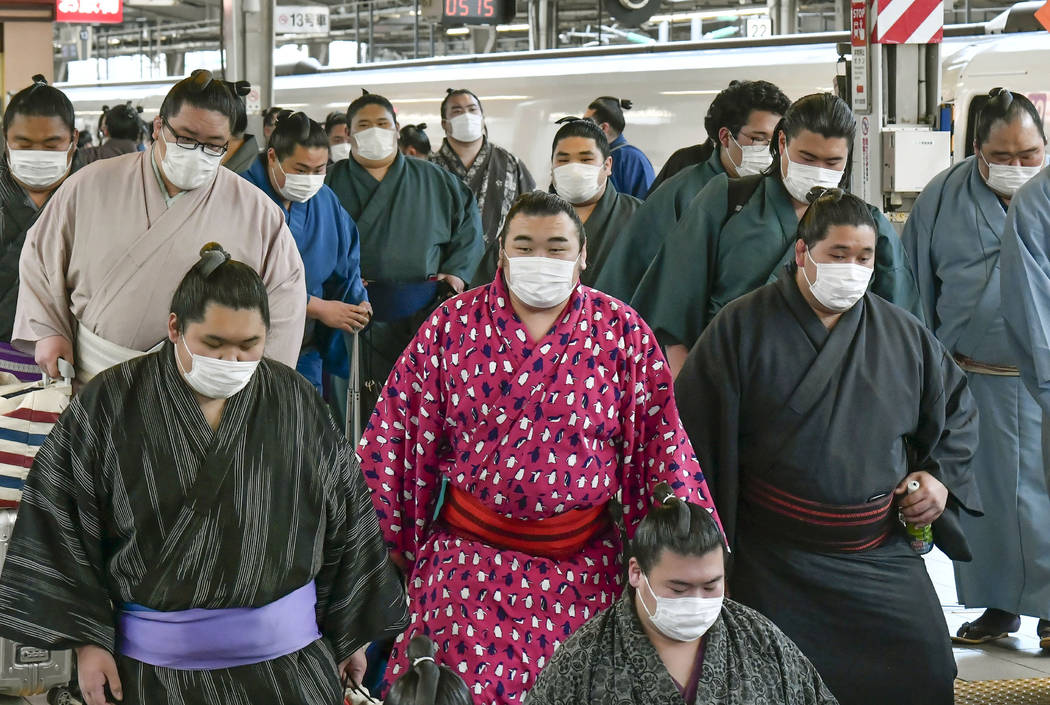 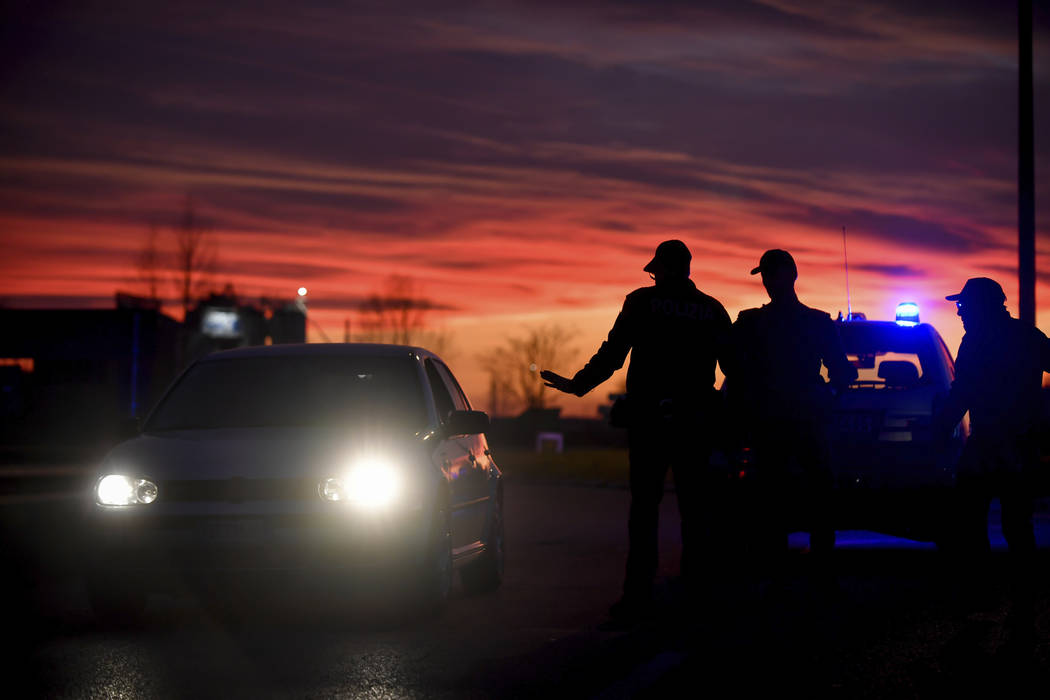 Police stops cars trying to enter or leave the cordoned area in Casalpusterlengo, Northern Italy, Sunday, Feb. 23, 2020. A dozen Italian towns saw daily life disrupted after the deaths of two people infected with the virus from China and a pair of case clusters without direct links to the outbreak abroad. (Claudio Furlan/LaPresse via AP) 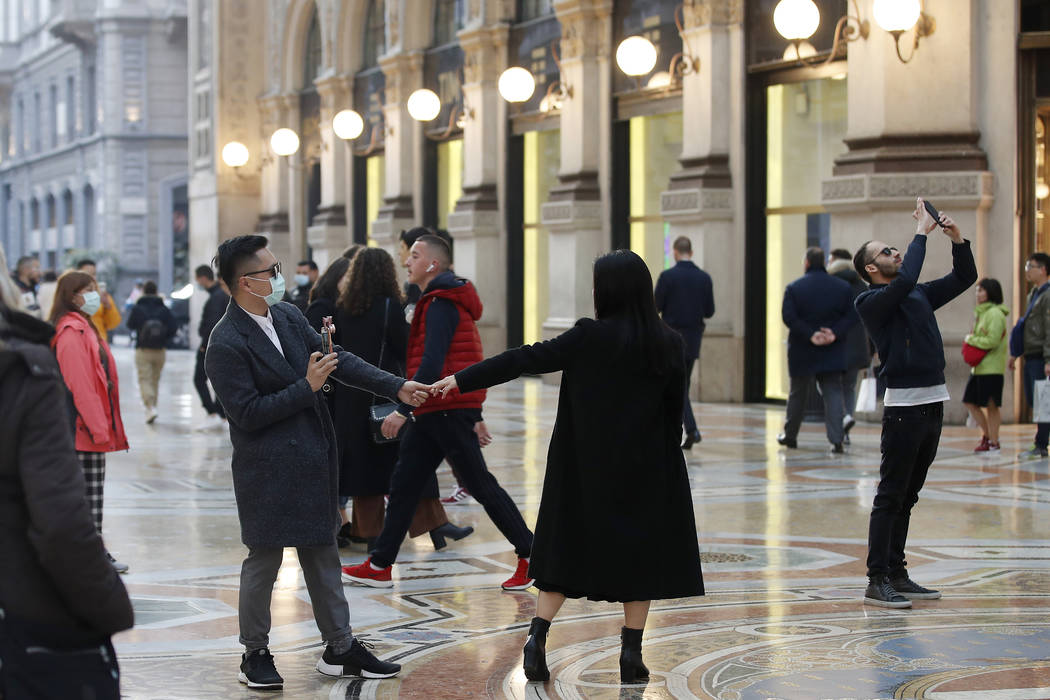 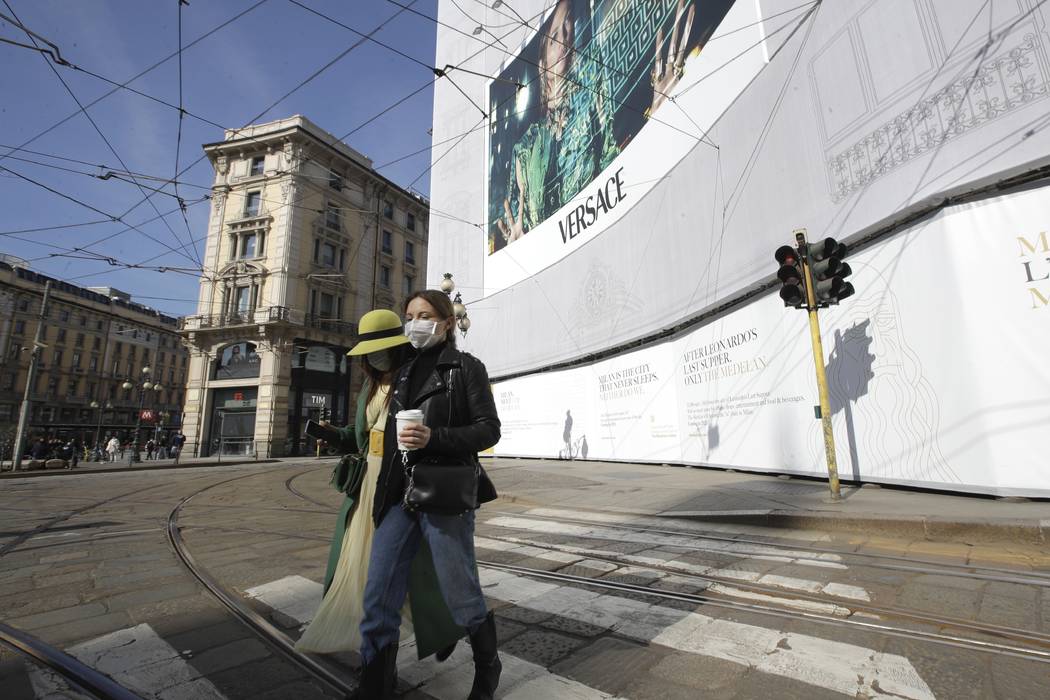 NEW YORK — The Dow Jones Industrial Average slumped more than 1,000 points Monday in the worst day for the stock market in two years as investors worry that the spread of the coronavirus will weaken global economic growth.

Traders sought safety in U.S. government bonds, gold and high-dividend stocks like utilities and real estate. The yield on the 10-year Treasury fell to the lowest level in more than three years.

Technology companies, whose supply chains have been disrupted, accounted for much of the broad market slide, which wiped out all of the Dow’s and S&P 500’s gains for the year.

More than 79,000 people worldwide have been infected by the new coronavirus. China, where the virus originated, still has the majority of cases and deaths. The country’s economy has been hardest hit as businesses and factories lie idle and people remain homebound because the government has severely restricted travel and imposed strict quarantine measures to stop the virus from spreading.

The ripple effects of the outbreak are being felt all around the world, as China is both a major importer of goods as well as a source of parts through intricate supply chains.

Still, while concern about the virus has prompted some sporadic selling in the past few weeks, for the most part global markets have traded as if the virus’ impact would be limited. Until Monday, the major U.S. stock indexes had all been in the green.

The rapid spread to other countries, however, is raising anxiety about the growing threat the outbreak poses to the global economy.

“Stock markets around the world are beginning to price in what bond markets have been telling us for weeks – that global growth is likely to be impacted in a meaningful way due to fears of the coronavirus,” said Chris Zaccarelli, chief investment officer for Independent Advisor Alliance.

The yield on the 10-year Treasury note fell sharply to 1.37 percent. It was at 1.90 percent at the start of the year. Gold prices jumped 1.7 percent.

The slump in U.S. indexes followed a sell-off in markets overseas. South Korea’s Kospi fell sharply after the government said the country is now on its highest alert for infectious diseases after cases there spiked. Italy’s benchmark tumbled after the number of virus cases there rose dramatically and a dozen towns in the northern part of the country were put under quarantine. There are also more cases of the virus being reported in the Middle East as it spreads to Iran, Iraq, and Kuwait, among others.

The viral outbreak threatens to crimp global economic growth and hurt profits and revenue for a wide range of businesses. Companies from technology giant Apple to athletic gear maker Nike have already warned about a hit to their bottom lines. Airlines and other companies that depend on travelers are facing pain from cancelled plans and shuttered locations.

Technology companies were among the worst hit by Monday’s sell-off. Apple, which depends on China for a lot of business, slid 4.8 percent. Microsoft dropped 4.3 percent.

Gilead Sciences climbed 4.6 percent and was among the few bright spots. The biotechnology company is testing a potential drug to treat the new coronavirus.

In the eyes of some analysts, stocks are finally catching up to the bond market, where fear has been dominant for months.

“The yields have been moving lower all year, so that’s providing a tail wind for utilities, for real estate,” said Willie Delwiche, investment strategist at Baird. “In the face of this heightened uncertainty, especially if it’s centered overseas, tech is going to bear some of the brunt of that because it’s been so popular, because it’s done so well, and because it has so much exposure to Asia.”

U.S. government bonds are seen as some of the safest possible investments, and investors have been piling into them throughout 2020, even as stocks overcame stumbles to set more record highs. A bond’s yield falls when its price rises, and the 10-year Treasury has been in such demand that its yield has plunged to 1.38 percent from roughly 1.90 percent at the start of the year.

Some analysts say stocks have been rising in recent weeks precisely because of the drop in yields. When bonds are paying such meager amounts, many investors say there’s little real competition other than stocks for their money.

Indeed, even with Monday’s sharp drops, the S&P 500 is still within 4.2 percent of its record set earlier this month.