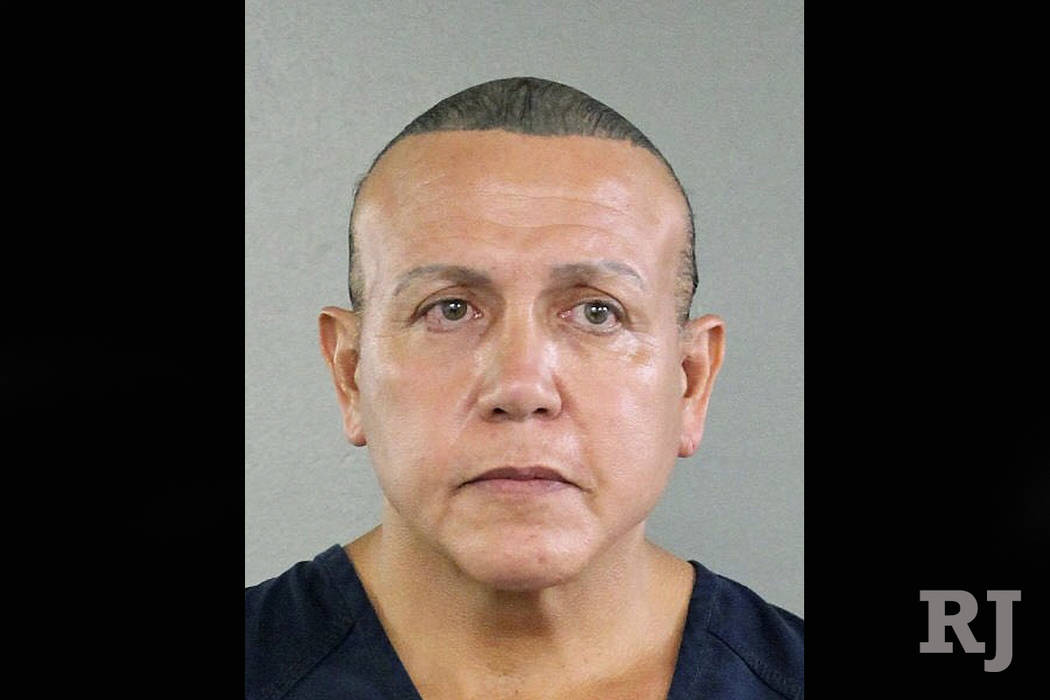 In this undated photo released by the Broward County Sheriff's office, Cesar Sayoc is seen in a booking photo, in Miami. Federal authorities took Sayoc, 56, of Aventura, Fla., into custody Friday, Oct. 26, 2018 in Florida in connection with the mail-bomb scare that earlier widened to 12 suspicious packages, the FBI and Justice Department said. (Broward County Sheriff's Office via AP) 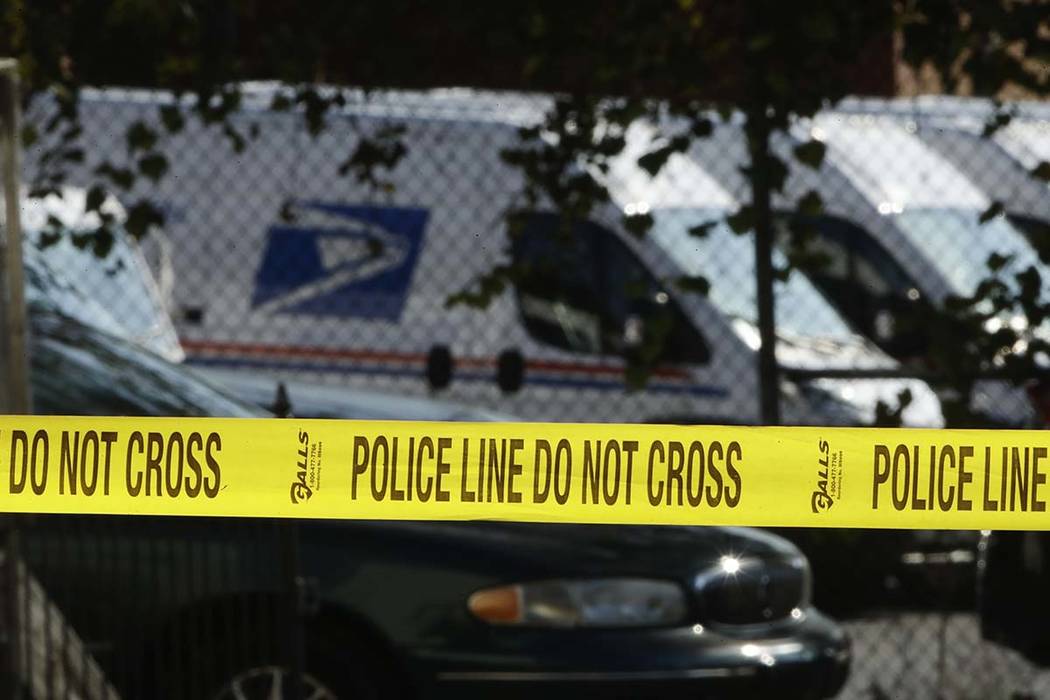 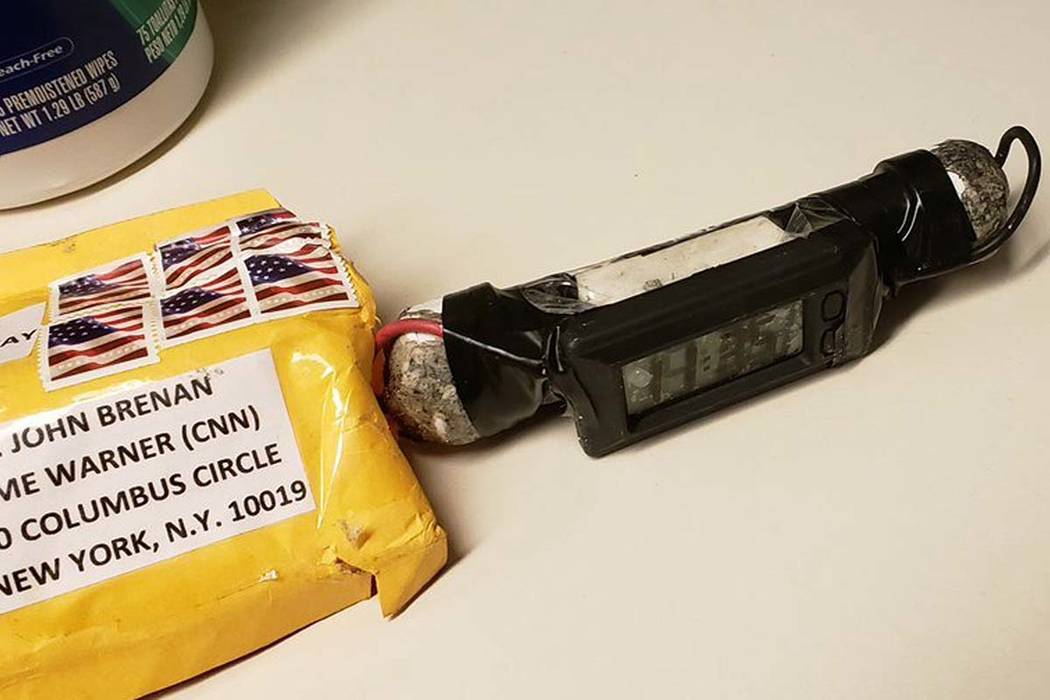 This image obtained Wednesday, Oct. 24, 2018, shows a package addressed to former CIA head John Brennan and an explosive device that was sent to CNN's New York office. Federal authorities have detained a person in South Florida in connection with the mail-bomb scare. (ABC News via AP) 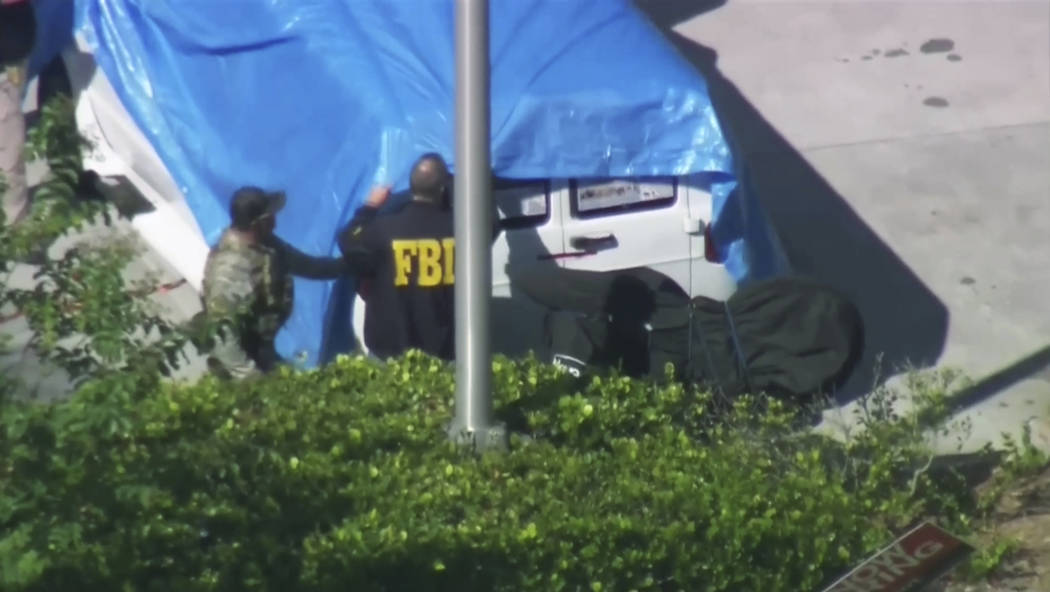 In this frame grab from video provided by WPLG-TV, FBI agents cover a van parked in Plantation, Fla., on Friday, Oct. 26, 2018, that federal agents and police officers have been examining in connection with package bombs that were sent to high-profile critics of President Donald Trump. The van has several stickers on the windows, including American flags, decals with logos and text. (WPLG-TV via AP) 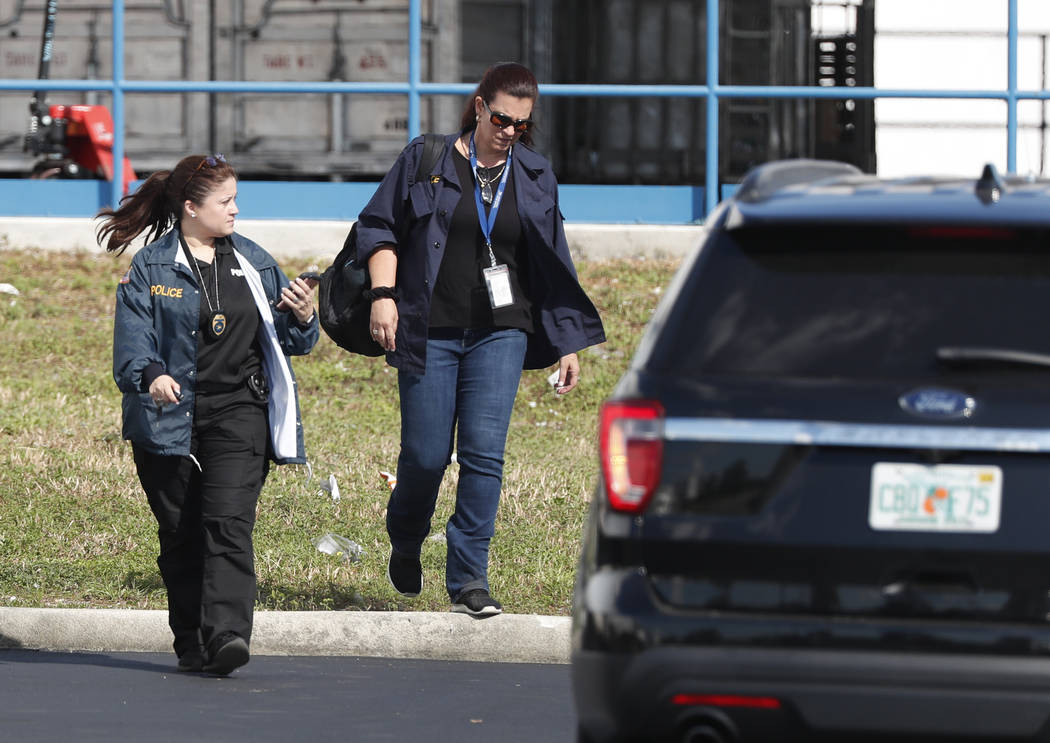 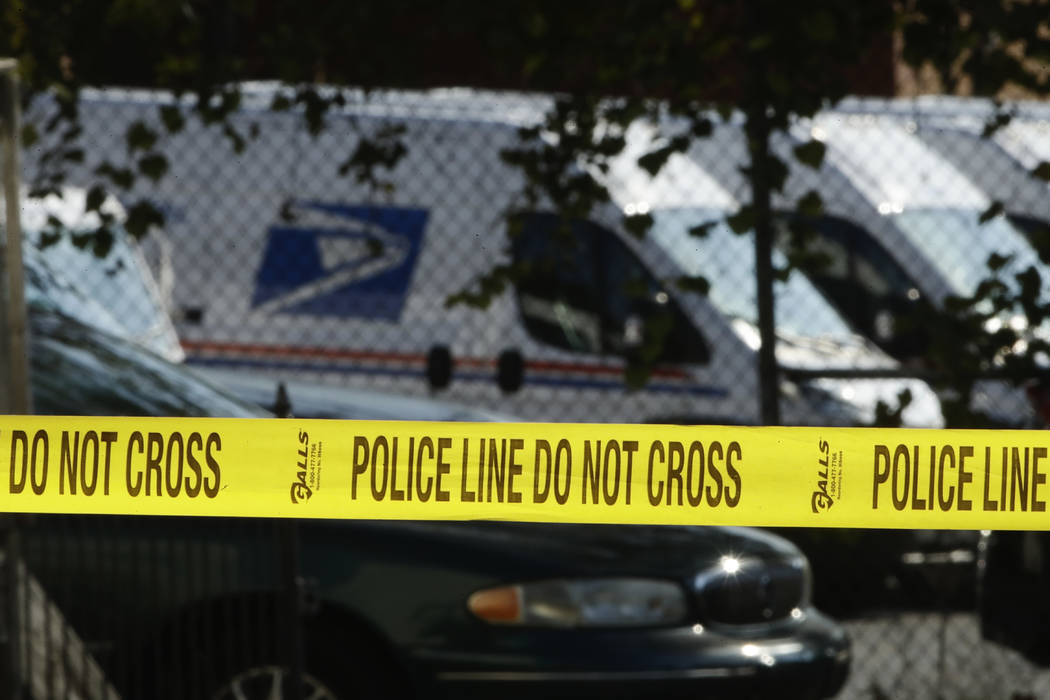 WASHINGTON — Cesar Sayoc is an amateur body builder and former stripper, a loner with a long arrest record who showed little interest in politics until Donald Trump came along.

On Friday, he was identified by authorities as the Florida man who put pipe bombs in small manila envelopes, affixed six stamps and sent them to some of Trump’s most prominent critics.

His arrest capped a week in which the bombs aimed at some of America’s biggest names — Obama, Clinton, De Niro — dominated the news and invited speculation about who might be responsible for them. The answer, authorities said, was Sayoc, a 56-year-old man from Aventura, Florida, who was devoted to Trump, had a history of financial problems and an extensive arrest record, including a stint on probation for making a bomb threat.

His attorney in that 2002 case, Ronald Lowy, described Sayoc as “a confused man who had trouble controlling his emotions.”

“I know the guy is a lunatic,” Altieri told The Associated Press. “He has been a loner.”

Altieri confirmed that Sayoc had been a stripper. On an online resume, Sayoc described himself as a booker and promoter for burlesque shows.

Stacy Saccal, the general manager of the Ultra Gentlemen’s Club in West Palm Beach, said Sayoc had worked there for about two months, first as a floor bouncer and for the past month as a disc jockey — most recently on Thursday night, hours before his arrest Friday morning.

“I didn’t know this guy was mad crazy like this,” she said Friday. “Never once did he speak politics. This is a bar. We don’t talk politics or religion in a bar, you know?”

Florida voter records show Sayoc first registered in March 2016 as a Republican and cast a ballot in that November’s presidential election.

He has been an active Trump supporter, tweeting and posting Facebook videos that appear to show him at the president’s rallies.

Sayoc lived in a white 2002 Dodge Ram van, which was plastered with stickers supporting Trump and criticizing media outlets that included CNN, which was also targeted by mail bombs.

The van was often parked outside an LA Fitness in Aventura, backed up in a parking space under the trees for shade. Patrons say they frequently saw him in the locker room.

“He’d just be walking straight to the shower and be in the shower forever,” said Edgar Lopez, who often exercises at the gym. “I never saw him working out.”

Other times, the van was seen parked at the beach in nearby Hollywood before dawn, with Sayoc stripping down to skin-tight shorts for an outdoor shower.

“I’ve seen the guy maybe 80 times and I never said a word to him because I had a feeling he was a little off,” said Marc Weiss, the superintendent of a building near where Sayoc frequently parked. “I assumed because he was showering at the beach that he was homeless.”

In 2015, he reported to police that his van was broken into outside of a gym in Oakland Park, Florida. He claimed that more than $40,000 worth of items were stolen, including $7,150 worth of Donald Trump-brand suits.

But often, Sayoc was on the other side of legal complaints.

In the 2002 bomb threat case, he had lashed out at a Florida utility representative because his electricity service was about to be cut off. The arrest report said Sayoc threatened in a phone call to blow up the utility’s offices and said that “It would be worse than September 11th.”

Sayoc was also convicted in 2014 for grand theft and in 2013 for battery. In 2004, he faced several felony charges for unlawful possession of a synthetic anabolic steroid often used to help build muscles. He also had several arrests going back to the 1990s for theft, obtaining fraudulent refunds and tampering with evidence.

Lowy said he recalled that Sayoc also had a run-in with authorities where he was charged with possessing a fake driver’s license after altering his birthdate to make him appear younger.

Sayoc displayed no political leanings at the time of the bombing charge, Lowy said, except for plastering his vehicle with Native American emblems. Sayoc told his lawyer his father was Native American.

More recently, Sayoc described himself on social media as being affiliated with the Seminole Warriors boxing club and being a member of the “Unconquered Seminole Tribe.”

Gary Bitner, a spokesman for the Seminole Tribe of Florida, said there is no evidence to show that Sayoc worked for the tribe or was a tribal member.

Altieri, his cousin, said Sayoc’s only connection to Native Americans was that he once dated a member of a tribe.

“When you get no love as a young kid, you get kind of out of whack,” he said.

He enrolled at Brevard College in North Carolina in 1980 and attended for three semesters, said Christie Cauble, the school’s interim director of communications. He then transferred to the University of North Carolina at Charlotte, enrolling for the 1983-84 academic year. Buffie Stephens, director of media relations for the school, said Sayoc didn’t declare a major. He played a few games as a walk-on player for the university’s men’s soccer team. There is no indication he ever completed a degree.

He moved to the Miami suburbs in the late 1980s. He had serious financial problems in recent years, including losing his home in foreclosure in 2009 and filling for Chapter 7 bankruptcy protection in 2012.

In court records, Sayoc was described as having $4,175 in personal property and more than $21,000 in debts, mostly from unpaid credit cards. His monthly income at the time was $1,070.

“Debtor lives with mother, owns no furniture,” Sayoc’s lawyer indicated in a property list. Sayoc’s mother, Madeline, also filed for bankruptcy around the same time. She was not immediately available to respond to phone messages left with her by the AP.

Sayoc’s media diet appears to have consisted of a toxic mixture of conspiracy theory, parody accounts and right-wing news sites. One of Altieri’s most favored recent sources was a Twitter account that spread hoaxes about the Parkland High School shooting in Florida earlier this year.

He tweeted at least 40 times a screenshot of a meme featuring the transparently false claim that Parkland mass-shooting survivor David Hogg never went to Stoneman Douglas High School, occasionally including hostile captions such as “He is a George Soros paid protester.” Soros, the billionaire progressive political donor, was targeted this week by a package bomb.

Sayoc even seems to have stumbled across a Polish conspiracy news site, tweeting out a wildly false claim that Angela Merkel had been conceived using Adolf Hitler’s frozen sperm.