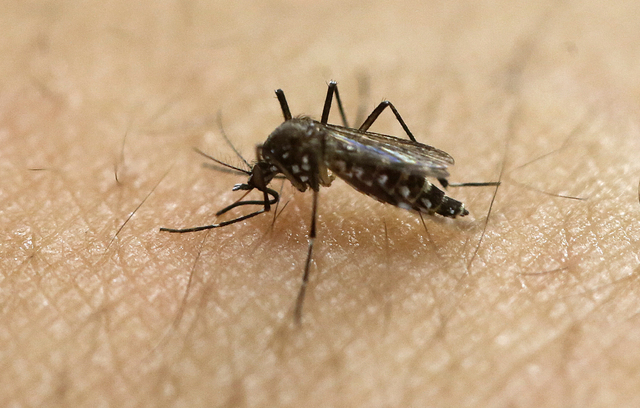 Afemale Aedes aegypti mosquito acquires a blood meal on the arm of a researcher at the Biomedical Sciences Institute in the Sao Paulo's University in Sao Paulo, Brazil, Jan. 18, 2016. (Andre Penner/AP)

Governor Rick Scott said the state believed active transmission of the virus was occurring in a small area of the populous Miami-Dade county. One case involved a woman and the other three involved men, Scott said.

While health officials have yet to identify mosquitoes carrying the virus, the state has ruled out other means of transmission, including travel to another country with a Zika outbreak, and sexual contact.

U.S. health officials have cautioned for months that the summer mosquito season was likely to bring local outbreaks, with Gulf Coast states such as Florida, Texas and Louisiana, on the front lines.

The current Zika outbreak was first detected in Brazil last year, triggering global alarm amid evidence the virus could cause a rare birth defect in infants and other severe neurological abnormalities.

Brazil has confirmed over 1,600 cases of microcephaly linked to Zika infection in pregnant women. The condition is defined by unusually small infant head size and related profound developmental problems.

Zika’s U.S. arrival comes with Congress in recess after failing to reach agreement over how much funding could be used to fight an outbreak. The Obama administration has requested $1.9 billion to finance research, mosquito control and other prevention efforts.