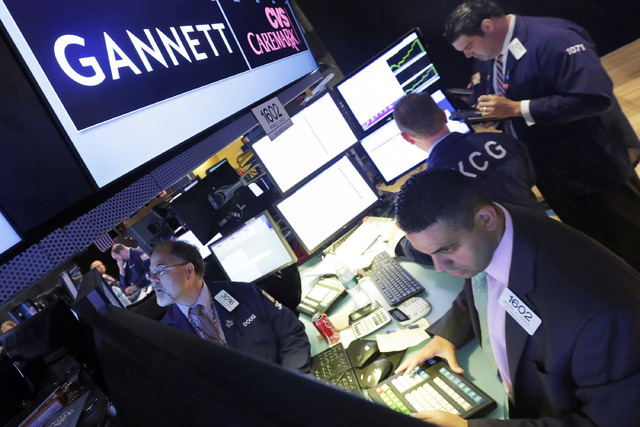 In this Aug. 5, 2014, file photo, specialist Michael Cacace, foreground right, works at the post that handles Gannett, on the floor of the New York Stock Exchange. (Richard Drew/AP)

WOODLAND PARK, N.J. — Gannett is laying off more than 100 employees at a New Jersey media company it recently purchased.

A company executive said Wednesday the layoffs are needed to improve the financial sustainability of the North Jersey Media Group, which publishes The Record, NorthJersey.com and other newspapers.

The McLean, Virginia-based Gannett purchased the news organization in July.

Tom Donovan, northeast regional president of Gannett East Group, says layoff notices will go out to 426 of the company’s employees this week. Among these, he says, more than 200 newsroom employees and about 60 in sales will remain with the company.

Donovan says the changes are part of “an ambitious restructuring” to make its newsroom and sales department more responsive to digital demands.

The company was previously owned by the Borg family since 1930.