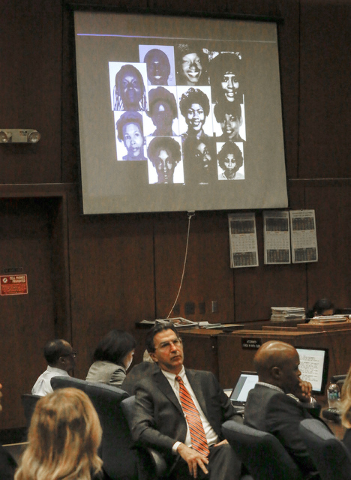 A montage of photos of alleged victims is projected on a screen in the courtroom during the during closing arguments in the serial murder trial of Lonnie Franklin Jr., seated at far left, in Los Angeles Superior Court, May 2, 2016. Franklin was convicted Thursday, May 5, 2016, of 10 murders and one attempted murder in the serial killings. (Mark Boster/ Los Angeles Times/AP/Pool) 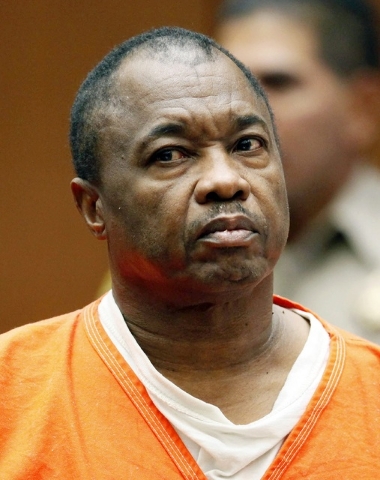 LOS ANGELES — A serial killer known as the “Grim Sleeper” should be sentenced to death for murdering nine women and a teenage girl over more than two decades in South Los Angeles, a jury decided Monday.

Family members of the victims cried Monday as the verdicts on punishment were read. Some rocked back and forth. One said, “Thank you.”

A prosecutor had asked jurors to show Franklin the same compassion he showed his victims and give him the “ultimate penalty.” An emotional defense lawyer asked jurors to sentence him to life without parole to hasten the healing process for the victims’ family members.

The jury called for the death penalty on all 10 murder counts and the judge set formal sentencing for Aug. 10.

Franklin said, “Yes, your honor,” in regards to the date but otherwise sat quietly and stared straight ahead the entire time. As he walked into court, family members of the victims whispered, “Dead man walking.”

Most of the slayings fit a similar pattern. Women were either fatally shot, choked — or both — and their partly clad or naked bodies were dumped in alleys and trash bins in the impoverished area where Franklin lived.

Police didn’t connect the crimes to a serial killer for years and victims’ family members and community residents complained the killings weren’t thoroughly investigated because the victims were poor and black, and some were prostitutes who had been using cocaine.

Franklin came under suspicion after a task force began re-examining the cold cases following the final killing in 2007 and DNA from his son showed similarities to genetic evidence found on some of the victims.

A detective posing as a busboy at a pizza parlor later collected utensils and crusts from Franklin while he was attending a birthday party. Lab results connected him to evidence found on several discarded bodies.

The culprit had been dubbed the “Grim Sleeper” because of an apparent gap in slayings between 1988 and 2002. Police once thought the killer may have been in prison during that period and later surmised he may have laid low after one victim barely survived a November 1988 assault.

Authorities, however, now say they don’t think Franklin ever rested.

Deputy District Attorney Beth Silverman was able to introduce evidence of four additional slayings during the penalty phase, including one that linked Franklin to a killing in 2000 during the apparent “sleep.” She also presented evidence of a 1984 slaying — a year before the first murder he was convicted of.

Prosecutors said they didn’t charge Franklin with the additional killings because it would have delayed the case that took nearly six years to bring to trial.

The 1984 killing of Sharon Dismuke, whose body was found naked in an abandoned gas station restroom, was like a bookend with the final slaying of Janecia Peters, who was found curled-up naked in a garbage bag in a dumpster in 2007, Silverman said.

Ballistics evidence showed the same gun was used to shoot both women and the weapon was found in Franklin’s garage after his arrest in 2010.

Defense lawyers questioned forensic evidence at trial and said DNA from other men was also found on several bodies. They suggested a “mystery man,” possibly a relative of Franklin’s, was the real killer.

The survivor who Franklin was convicted of attempting to murder helped prosecutors establish the killer’s modus operandi.

Enietra Washington described getting a lift from Franklin in his orange Ford Pinto and then having him shoot her in the chest while she sat in the passenger seat.

As she was losing consciousness, he sexually assaulted her and she remembered seeing the flash from a Polaroid camera.

A photo of a bleeding and partly nude Washington was later found hidden behind a wall in Franklin’s garage. Police found photos of other victims in the home.

Nearly 30 years after Washington was left for dead on the side of a road, she pointed at Franklin in court and said: “That’s the person who shot me.”

Suspect in deaths of 4 Idaho students arrested in Pennsylvania