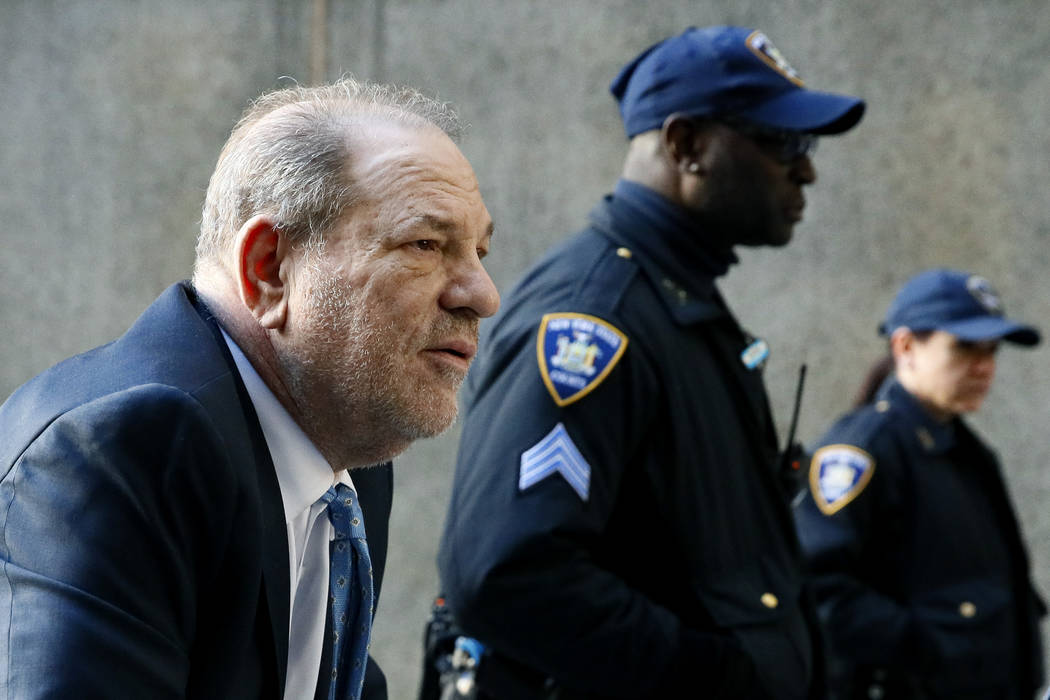 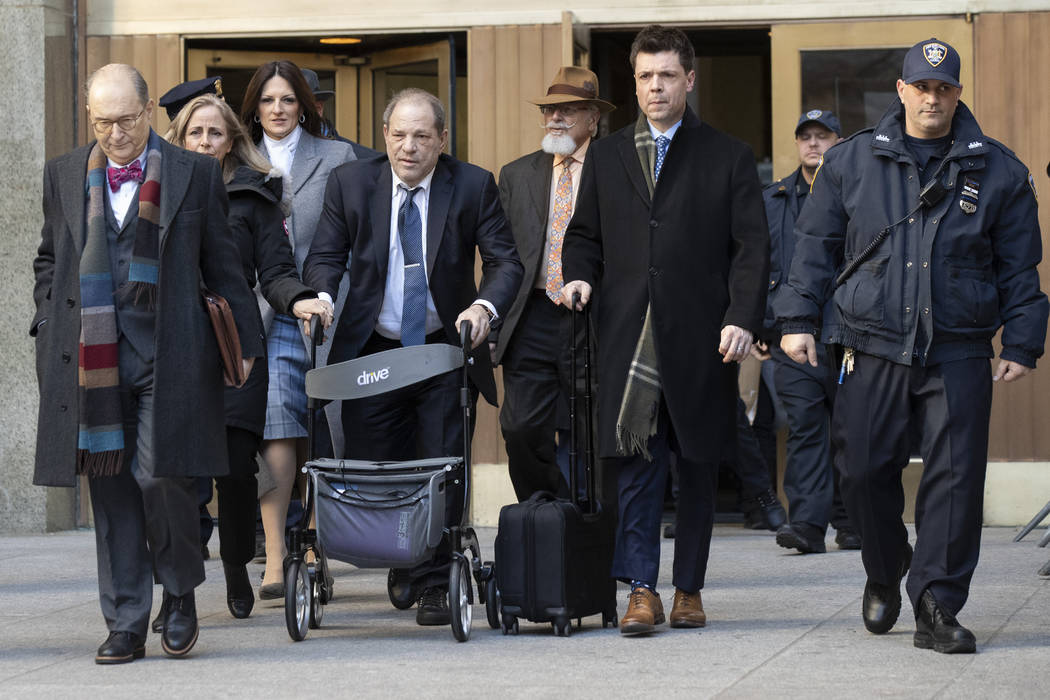 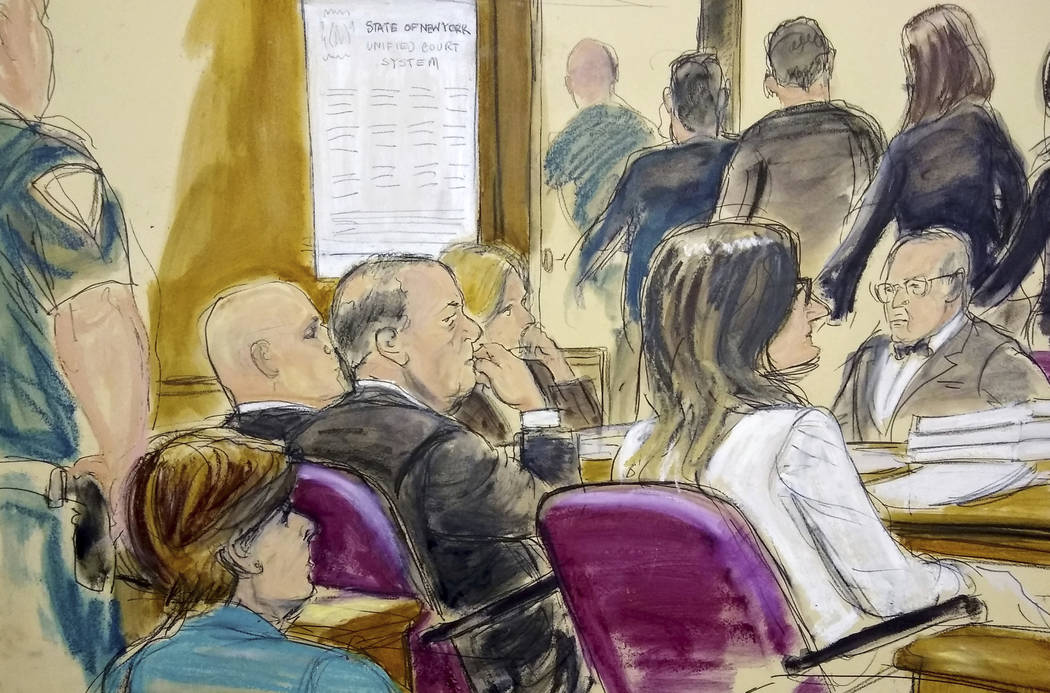 In this courtroom drawing, Harvey Weinstein, center, sits at the defense table surrounded by his attorneys as jurors file out of the courtroom after being told by the judge to go back and keep deliberating in Weinstein's rape case, Friday, Feb. 21, 2020, at Manhattan Supreme Court in New York. Earlier they sent out a note saying they were deadlocked on two charges. Attorney Gloria Allred, foreground left, is seated in the gallery behind Weinstein. (Elizabeth Williams via AP) 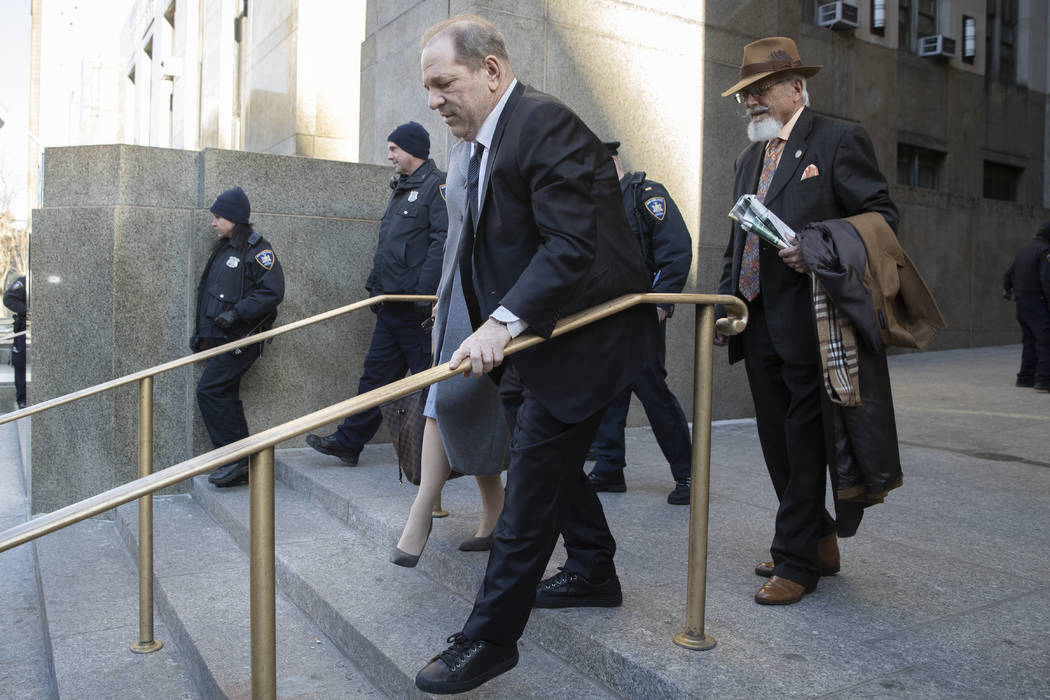 NEW YORK — Harvey Weinstein was convicted Monday of rape and sexual assault against two women and was immediately handcuffed and led off to jail, sealing his dizzying fall from powerful Hollywood studio boss to archvillain of the #MeToo movement.

The 67-year-old Weinstein had a look of resignation on his face as he heard verdict that could send him to prison for up to 29 years.

“This is the new landscape for survivors of sexual assault in America, I believe, and it is a new day. It is a new day because Harvey Weinstein has finally been held accountable for crimes he committed,” District Attorney Cyrus Vance Jr. said. “Weinstein is a vicious, serial sexual predator who used his power to threaten, rape, assault and trick, humiliate and silence his victims.”

Weinstein defense attorney Arthur Aidala said: “As sure as I’m a bald man, we will be appealing.”

The jury of seven men and five women took five days to find Weinstein guilty of sexually assaulting production assistant Mimi Haley in 2006 and raping an aspiring actress in a New York City hotel room in 2013.

He was acquitted on the most serious charges, two counts of predatory sexual assault, each carrying a sentence of up to life in prison. Both of those counts hinged on the word of “Sopranos” actress Annabella Sciorra, who said Weinstein raped her and forcibly performed oral sex her at at her apartment in the mid-1990s.

The sexual assault charge carries up to 25 years in prison, while the rape is punishable by up to four years. Sentencing was set for March 11.

Judge James Burke ordered Weinstein taken to jail immediately. Court officers surrounded Weinstein, handcuffed him and led him out of the courtroom via a side door without the use of the walker he relied on for much for much of the trial. The judge said he will request that Weinstein be held in the infirmary after his lawyers said he needs medical attention following unsuccessful back surgery.

The conviction was seen as a long-overdue reckoning for Weinstein after years of whispers about his behavior turned into a torrent of accusations in 2017 that destroyed his career and gave rise to #MeToo, the global movement to encourage women to come forward and hold powerful men accountable for their sexual misconduct.

“Weinstein with his manipulation, his resources, his attorneys, his publicists and his spies did everything he could to silence to survivors,” Vance said after the verdict.

In addition to the three women he was charged with attacking, three more women who said they, too, were attacked by Weinstein also testified as part of an effort by prosecutors to show a pattern of brutish behavior on his part.

The Associated Press does not typically identify people who say they are victims of sex crimes unless they grant permission, as Haleyi and Sciorra did.

The jury signaled its struggles with the Sciorra charges four days into deliberations. On Friday, the jurors sent the judge a note indicating they were deadlocked on those counts but had reached a unanimous verdict on the others. The judge told them to keep on deliberating.

While Weinstein did not testify, his lawyers contended that any sexual contact was consensual and that his accusers went to bed with him to get ahead in Hollywood. The defense seized on the fact that the two women he was convicted of attacking stayed in contact with him through warm and even flirty emails — and had sex with him — well after he supposedly attacked them.

The hard-charging and phenomenally successful movie executive helped bring to the screen such Oscar winners as “Good Will Hunting,” “Pulp Fiction,” “The King’s Speech” and “Shakespeare in Love” and nurtured the careers of celebrated filmmakers like Quentin Tarantino and Kevin Smith.

Weinstein now faces charges in Los Angeles. In that case, announced just as the New York trial was getting under way on Jan. 6, authorities allege Weinstein raped one woman and sexually assaulted another on back-to-back nights during Oscars week in 2013.

The New York trial was the first criminal case to arise from a barrage of allegations against Weinstein from more than 90 women, including actresses Gwyneth Paltrow, Salma Hayek and Uma Thurman. Most of those cases were too old to prosecute.

During the trial, Weinstein regularly trudged into the courthouse stooped and unshaven, using a walker after recently undergoing back surgery — a far cry from the way he was depicted in court as a burly, “Jekyll-and-Hyde” figure whose eyes seemed to turn black with menace when his anger flared.

“If he heard the word ‘no,’ it was like a trigger for him,” his rape accuser testified.

Several women testified that Weinstein excused his behavior as the price for getting ahead in Hollywood. One said that when she laughed off his advances, he sneered, “You’ll never make it in this business. This is how this industry works.”

The jury heard lurid testimony that Weinstein injected himself with a needle to get an erection, that his genitals appeared disfigured, that he sent Sciorra a box of chocolate penises and that he once showed up uninvited at her hotel room door in his underwear with a bottle of baby oil in one hand and a video in the other.

The prosecution’s task was made more complicated because two of the women at the very center of the case didn’t just abandon Weinstein after the alleged encounters: Haleyi testified that she had sex with him two weeks later, while the rape accuser whose name was withheld said she had a sexual encounter with him more than three years afterward.

Like Haleyi, she sent Weinstein friendly and sometimes flirtatious emails, such as “Miss you big guy” and “I love you, always do. But I hate feeling like a booty call.”

During a cross-examination from Weinstein’s lawyers so exhaustive that she broke down in tears on the stand, the woman said she sent him flattering emails and kept seeing him because she was afraid of his unpredictable anger and “I wanted him to believe I wasn’t a threat.”

To blunt that line of questioning, prosecutors called to the witness stand a forensic psychiatrist who said that most sexual assault victims continue to have contact with their attackers and that they hope what happened to them “is just an aberration.”

During closing arguments, Weinstein lawyer Donna Rotunno charged that Weinstein had become “the target of a cause and a movement” — #MeToo — and asked the jury to ignore “outside forces.” She said the case against Weinstein amounted to “regret renamed as rape,” arguing that the women exercised their free will to try to further their careers.

Prosecutor Joan Illuzzi-Orbon told the jury that Weinstein considered himself such a big shot in Hollywood that he thought he could get away with treating women as “complete disposables.”

“The universe is run by me and they don’t get to complain when they get stepped on, spit on, demoralized and, yes, raped and abused by me — the king,” she said, mimicking Weinstein.

Rumors about Weinstein’s behavior swirled in Hollywood circles for a long time, but he managed to silence many accusers with payoffs, nondisclosure agreements and the constant fear that he could crush their careers if they spoke out.

Weinstein was finally arrested and led away in handcuffs in May 2018, seven months after The New York Times and The New Yorker exposed his alleged misconduct in stories that would win the Pulitzer Prize.

Among other men taken down by the #MeToo movement since the scandal broke: news anchors Matt Lauer and Charlie Rose, actor Kevin Spacey and Sen. Al Franken.

Weinstein, the product of a working-class family from Queens, achieved success at two movie studios he created with his brother Bob: Miramax — named for their parents, Miriam and Max — and then the Weinstein Co.

The Weinstein Co. went bankrupt after his disgrace. A tentative settlement was reached last year to resolve nearly all lawsuits stemming from the scandal. It would pay Weinstein’s alleged victims about $25 million, but he would not have to admit any wrongdoing or personally pay anything; the studio’s insurance companies would cover the cost.