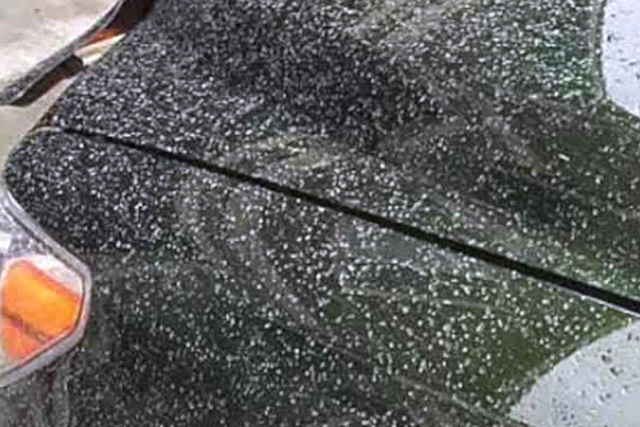 PORTLAND, Ore. — Scientists have finally solved the mystery of a milky rain that coated cars and raised eyebrows across a wide swathe of the Pacific Northwest this February, researchers said on Tuesday.

A multi-disciplinary Washington State University team said they had determined that dust from the dry bed of a shallow lake some 480 miles from where the rain fell was to blame for the unusual precipitation.

The rain left a trail of powdery residue across a nearly 200-mile stretch of eastern parts of Oregon and Washington state earlier this year, leaving scientists and residents perplexed about its origins.

Some scientists initially speculated that an erupting Japanese volcano was the source of the powdery white substance. Others blamed wildfires, and some thought that a Nevada dust storm was the cause.

All three theories were proven wrong when a Washington State University hydrochemist teamed up with a meteorologist and two geologists at the school to test the chemical composition of rainwater samples and analyze February wind pattern data.

“The wind trajectory analyses didn’t add up,” said Brian Lamb, who runs the university’s Laboratory for Atmospheric Research, which determined that air was flowing from the south before the milky rain fell.

Sodium levels in water samples offered another clue, WSU hydrochemist Kent Keller said in a statement issued on Tuesday. “The chemistry is consistent with a saline source from a dry lake bed,” he said.

That led researchers to consider Oregon’s Summer Lake, which is shallow and often largely dries up during droughts. A storm with winds reaching 60 miles per hour (96.5 kph) struck Summer Lake the night before the milky rain.

“That would have been powerful enough to lift a good-size dust plume,” said Nic Loyd, a meteorologist at the university.

Seven years ago, a similar milky rain mystery in New Mexico was also ultimately traced to a dry lake bed, they said.