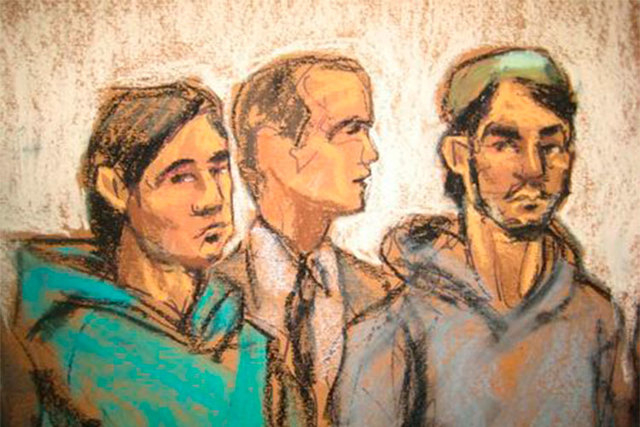 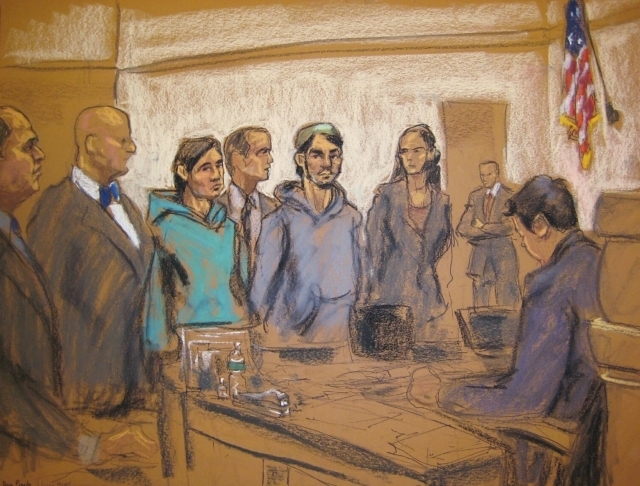 Their arrests took place in New York and Florida.

Abror Habibov, Akhror Saidakhmetov and Abdurasul Juraboev are accused by the federal government of attempting to join ISIS and of fostering plans to kill the president and shoot law enforcement officers.

The three men face charges that include attempting and conspiring to provide material support and resources to a foreign terrorist organization, a criminal complaint filed in federal court said.

They all legally came to the United States, although one overstayed his welcome.

Here’s what we know about them as the case unfolds.

Habibov is a 30-year-old Uzbekistani citizen, who police say “helped organize and finance” the operation. He was arrested in Jacksonville, Florida.

Habibov was in the United States legally, but overstayed his visa, according to police.

Habibov attended New York City College of Technology in the spring of 2013 as a part-time student, but he is not currently enrolled, according to a statement from the college.

Saidakhmetov is a 19-year-old citizen of Kazakhstan and is a legal permanent resident of the United States who lives in Brooklyn, New York, with fellow suspect Abdurasul Juraboev.

Court documents say Saidakhmetov worked at Habibov’s mall kiosks in Philadelphia; Savannah, Georgia; and Chesapeake, Virginia, in the fall and winter of 2014.

The Brooklyn travel agent who booked his ticket said Saidakhmetov came into the travel agency where he works last week, wanting to book a round-trip ticket to Istanbul.

Saidakhmetov said he couldn’t afford a direct flight, which would have cost $900, so the travel agent booked him a trip connecting in Kiev, Ukraine, for $571.

At the time, the travel agent said, he saw “nothing out of the ordinary.”

The landlord of the Brooklyn apartment building where Saidakhmetov and Juraboev lived said the 19-year-old recently told him he was about to take a long vacation.

“Allahu akbar (God is great). I was very happy after reading this, my eyes joyful so much victory.”

The criminal complaint says he told a confidential informant that he wanted to travel to Syria to wage jihad, “but that his mother had feared that he would do so and took his passport so that he could not travel.”

Last week, Saidakhmetov called his mother and asked for his passport, according to the criminal complaint.

“When asked where he wanted to go, Saidakhmetov responded that, if a person has a chance to join Islamic State and does not go there, on judgment day he will be asked why, and that it is a sin to live in the land of infidels,” the complaint says.

“After Saidakhmetov continued to ask for his passport, his mother hung up the phone.”

Saidakhmetov told the informant he would try to get his passport back by telling his mom he was traveling to Uzbekistan to visit relatives.

When the informant suggested it might be better to take a direct flight to Turkey, Saidakhmetov responded, “America is catching, they are very strict now. … it is better to fool them by flying here and flying there.”

There were other recorded conversations

In one from November, Saidakhmetov told Juraboev that he wanted to join the U.S. military so he could share information with ISIS.

At the very least, he said, “he could always open fire on American soldiers and kill as many of them as possible,” according to the complaint.

In another recorded conversation in January, Saidakhmetov told the informant that if he couldn’t get travel documents to go to Syria, “I will just go and buy a machine gun, AK-47, go out and shoot all police.”

Later, according to the complaint, he said, “It is legal in America to carry a gun. We will go and purchase one handgun … then go and shoot one police officer. Boom. … Then, we will take his gun, bullets and bulletproof vest … then, we will do the same with a couple of others. Then we will go to the FBI headquarters, kill the FBI people.”

Juraboev is a 24-year-old citizen of Uzbekistan. Like Saidakhmetov, he is a legal permanent resident of the United States.

Before his arrest at his Brooklyn home, Juraboev was scheduled to hop a flight to Turkey, the criminal complaint said.

He worked at the Gyro King restaurant in Brooklyn and had asked for the weekend off so he could travel. He would arrive at work around noon daily, wearing headphones and greeting co-workers as he made his delivery of lettuce, tomatoes and onions, according to a co-worker named Saad, who described the suspect as quiet and “just a normal guy.”

On Feb. 21, Juraboev sent his employer a text message: “Brother I want to leave my country next weekend. Because I have some problem. Is it possible or not? Sorry!”

In August, court documents say, Juraboev was active on an Uzbek-language website that promoted ISIS.

“Greetings! We too wanted to pledge our allegiance and commit ourselves while not present there,” Juraboev is said to have posted.

“I am in USA now but we don’t have any arms. But is it possible to commit ourselves as dedicated martyrs anyway while here? What I’m saying is, to shoot Obama and then get shot ourselves, will it do? That will strike fear in the hearts of infidels.”

Juraboev admitted that he’d posted the message and that he believed in the ISIS agenda.

He also said “that he would harm Obama if he had the opportunity to do so, but currently does not have the means or an imminent plan to do so,” the complaint says.

In intercepted online communication to a pro-ISIS website, Juraboev said his parents were in Uzbekistan.

“Sometimes they worship and practice Islam, sometimes they do idolatry,” he said, according to the complaint. “My sisters are uncovered, lack knowledge of a religion. I wish they knew at least how to cover themselves up.”

The administrator encouraged him to join the fight. Juraboev said he’s worried about being caught, the court documents say.