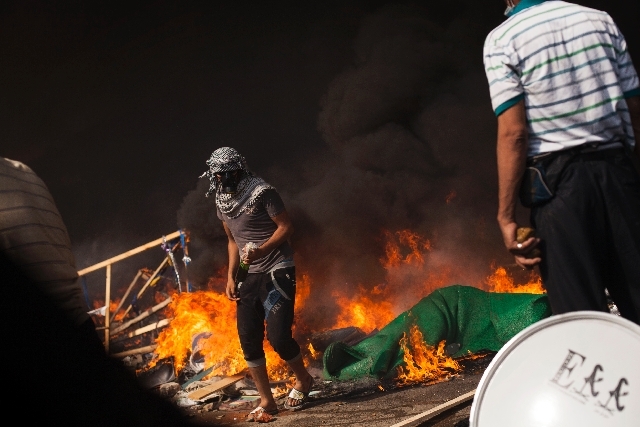 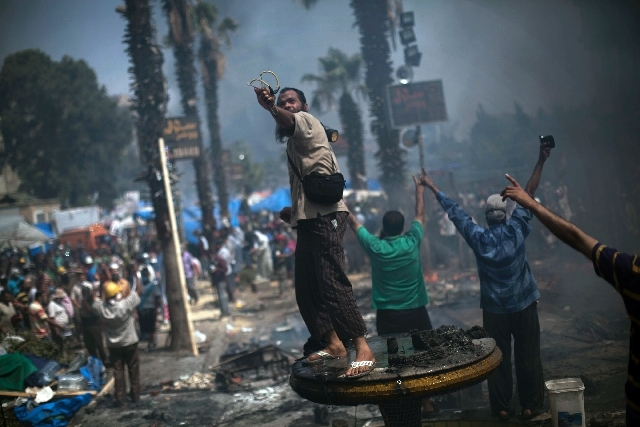 A supporter of ousted President Mohammed Morsi shoots a slingshot toward the Egyptian police on Wednesday during clashes in Cairo's Nasr City district Wednesday. 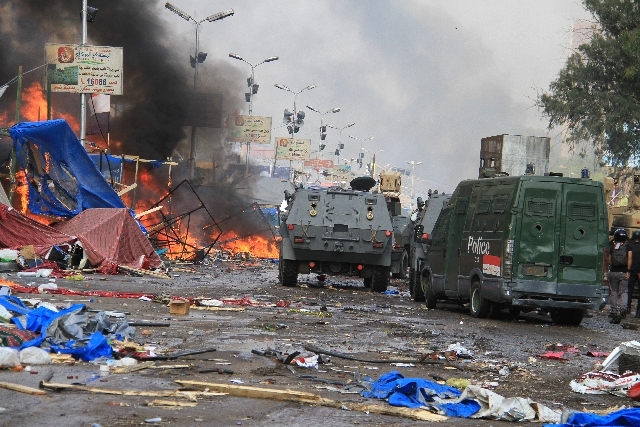 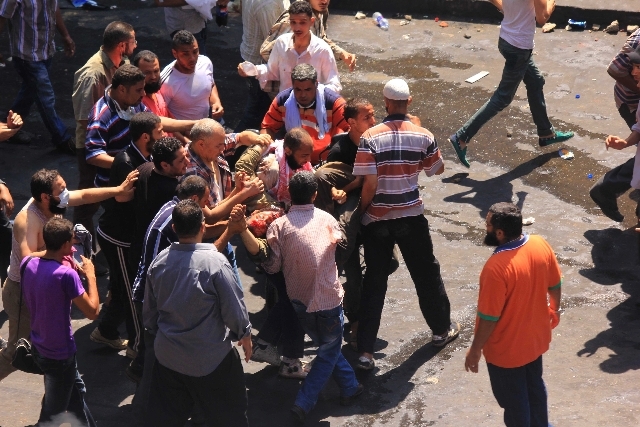 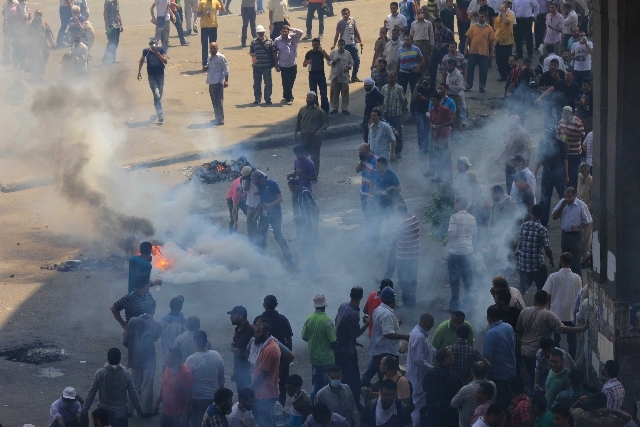 The crackdown drew widespread condemnation from the Muslim world and the West, including the U.S., and Nobel Peace Prize winner Mohamed ElBaradei resigned as the interim vice president in protest – a blow to the new leadership’s credibility with the pro-reform movement.

“Today was a difficult day,” interim Prime Minister Hazem el-Beblawi said in a televised address to the nation. While he regretted the bloodshed, he offered no apologies for moving against the supporters of ousted President Mohammed Morsi, saying they were given ample warnings to leave and he had tried foreign mediation efforts.

The leaders of Morsi’s Muslim Brotherhood called it a “massacre.” Several of them were detained as police swept through the two sit-in sites, scores of other Islamists were taken into custody, and the future of the once-banned movement was uncertain.

Backed by helicopters, police fired tear gas and used armored bulldozers to plow into the barricades at the two protest camps in different sections of Cairo where the Morsi supporters had been camped since before he was ousted by the military July 3.

Army troops did not take part in the two operations, which began shortly after 7 a.m. (0500 GMT – 1 a.m. EDT), although they provided security at the locations.

The smaller camp – near Cairo University in Giza – was cleared of protesters relatively quickly, most taking refuge in the nearby Orman botanical gardens, on the campus of Cairo University and the zoo.

But it took about 12 hours for police to take control of the main sit-in site near the Rabaah al-Adawiya Mosque in Nasr City that has served as the epicenter of the pro-Morsi campaign and had drawn chanting throngs of men, women and children only days earlier.

After the police moved on the camps, street battles broke out in Cairo and other cities across Egypt. Government buildings and police stations were attacked, roads were blocked, and Christian churches were torched, Interior Minister Mohammed Ibrahim said.

At one point, protesters trapped a police Humvee on an overpass near the Nasr City camp and pushed it off, according to images posted on social networking sites that showed an injured policeman on the ground below, near a pool of blood and the overturned vehicle.

The Health Ministry said 235 civilians were killed and more than 2,000 injured, while Ibrahim said 43 policemen died in the violence. The death toll was expected to rise.

Three journalists were among the dead: Mick Deane, 61, a cameraman for British broadcaster Sky News; Habiba Ahmed Abd Elaziz, 26, a reporter for the Gulf News, a state-backed newspaper in the United Arab Emirates; and Ahmed Abdel Gawad, who wrote for Egypt’s state-run newspaper Al Akhbar. Deane and Elaziz were shot to death, their employers said, while the Egyptian Press Syndicate, a journalists’ union, said it had no information on how Gawad was killed.

For much of the afternoon, thousands of Morsi supporters chanting “God is great!” tried to join those besieged by the security forces inside the Nasr City camp. They were driven away when police fired tear gas.

Smoke clogged the sky above Cairo and fires smoldered on the streets, which were lined with charred poles and tarps after several tents were burned.

The Great Pyramids just west of Cairo were closed to visitors for the day together with the Egyptian museum in the heart of the city. The Central Bank instructed commercial banks to close branches in areas affected by the chaos.

“Egypt has never witnessed such genocide,” Brotherhood spokesman Ahmed Aref told The Associated Press from the larger of the two protest camps before it was cleared.

The pro-Morsi Anti-Coup alliance alleged security forces used live ammunition, but the Interior Ministry, which is in charge of the police, said its forces only used tear gas and that they came under fire from the camp.

“I already wrote my will and gave my wife the number of my bank account and told her who owes us money and who we owe money to,” said 28-year-old chemist Ahmed Shaker during a brief break in fighting with security forces at the Nasr City camp.

“If I have to die, I will die,” said the father of one child carrying several bottles of beer he said he intended to use as firebombs.

Security officials said train services between northern and southern Egypt were suspended to prevent Morsi supporters from traveling to Cairo. Clashes erupted on two roads in the capital’s upscale Mohandiseen district when Morsi supporters opened fire on passing cars and pedestrians. Police used tear gas to chase them away.

The security officials spoke on condition of anonymity because they were not authorized to talk to media.

The government declared a monthlong nationwide state of emergency and imposed a nighttime curfew on Cairo, Alexandria on the Mediterranean and 12 other provinces where violence broke out following the simultaneous raids.

It also ordered the armed forces to support the police in restoring law and order and protect state facilities. Egypt was under emergency law for most of Mubarak’s 29 years in power.

Despite the curfew, sporadic clashes continued in Cairo through the evening.

In the city of Assiut, south of Cairo, a police station was hit by two mortar shells Wednesday night fired by suspected Morsi supporters, according to officers there who spoke on condition of anonymity because they were not authorized to talk to reporters.

Anger over Morsi’s ouster already has led to an increase in Islamic militant violence in the northern half of the Sinai Peninsula that borders Israel and Gaza, and many fear growing anger over the crackdown and deaths of civilians could be exploited by extremists.

The turmoil was the latest chapter in a bitter standoff between Morsi’s supporters and the interim leadership that took over the Arab world’s most populous country. The military ousted Morsi after millions of Egyptians massed in the streets at the end of June to call for him to step down, accusing him of giving the Brotherhood undue influence and failing to implement vital reforms or bolster the ailing economy.

Several senior leaders of the Brotherhood who were wanted by police were detained after the camps were stormed, according to security officials and state television. Among those seized were Brotherhood leaders Mohammed el-Beltagy and Essam el-Erian, and hard-line cleric Safwat Hegazy – all wanted by prosecutors to answer allegations of inciting violence and conspiring to kill anti-Morsi protesters.

Morsi himself has been held at an undisclosed location. Other Brotherhood leaders have been charged with inciting violence or conspiring in the killing of protesters.

A security official said 200 protesters were arrested at both camps. Several men could be seen walking with their hands up as they were led away by black-clad police.

Islam Tawfiq, a Brotherhood member at the Nasr City sit-in, said the camp’s medical center was filled with dead and that the injured included children.

“No one can leave and those who do are either arrested or beaten up,” he told AP.

The Muslim Brotherhood’s political arm claimed that more than 500 protesters were killed and some 9,000 wounded in the two camps, but those figures could not be confirmed and nothing in the video from AP or local TV networks suggested such a high death toll.

The Brotherhood has spent most of the 85 years since its creation as an outlawed group or enduring crackdowns by successive governments. The latest developments could provide authorities with the grounds to once again declare it an illegal group and consign it to the political wilderness.

In his televised address, el-Beblawi said the government could not indefinitely tolerate a challenge to authority that the 6-week-old protests represented.

“We want to see a civilian state in Egypt, not a military state and not a religious state,” he said.

But the resignation of ElBaradei, the former head of the U.N. nuclear agency and a figure widely respected by Western governments, was the first crack to emerge in the government as a result of the violence.

ElBaradei had made it clear in recent weeks that he was against the use of force to end the protests. At least 250 people have died in previous clashes since the coup that ousted Morsi, Egypt’s first freely elected president.

On Wednesday, his letter of resignation to interim President Adly Mansour carried an ominous message to a nation already torn by more than two years of turmoil.

“It has become difficult for me to continue to take responsibility for decisions I disapprove of, and I fear their consequences,” he said in the letter that was emailed to the AP. “I cannot take responsibility before God, my conscience and country for a single drop of blood, especially because I know it was possible to spare it.

“I regret that those who benefited today are the proponents of violence, terror and the more extreme groups, and you will remember my words to you,” ElBaradei added.

The National Salvation front, the main opposition grouping that he headed during Morsi’s year in office, said it regretted his departure and complained that it was not consulted beforehand.

Tamarod, the youth group behind the mass anti-Morsi protests that preceded the coup, said ElBaradei was dodging his responsibility at a time when his services were needed.

Sheik Ahmed el-Tayeb, the powerful head of Al-Azhar mosque, Sunni Islam’s main seat of learning, also sought to distance himself from the violence. He said in a statement he had no prior knowledge of the action.

The violence drew condemnation from other predominantly Muslim countries, but also from the West, with Secretary of State John Kerry saying it had dealt a “serious blow” to Egypt’s political reconciliation efforts.

“This is a pivotal moment for all Egyptians,” said Kerry, who spoke by phone with the foreign minister. “The path toward violence leads only to greater instability, economic disaster and suffering.”

Turkish Prime Minister Recep Tayyip Erdogan’s office called it “a serious blow to the hopes of a return to democracy,” while Iran warned that the violence “strengthens the possibility of civil war.” Erdogan, an Islamist, was one of Morsi’s main foreign backers.

British Prime Minister David Cameron, who also condemned the violence, called for “a genuine transition to a genuine democracy. That means compromise from all sides – the President Morsi supporters but also the military.”