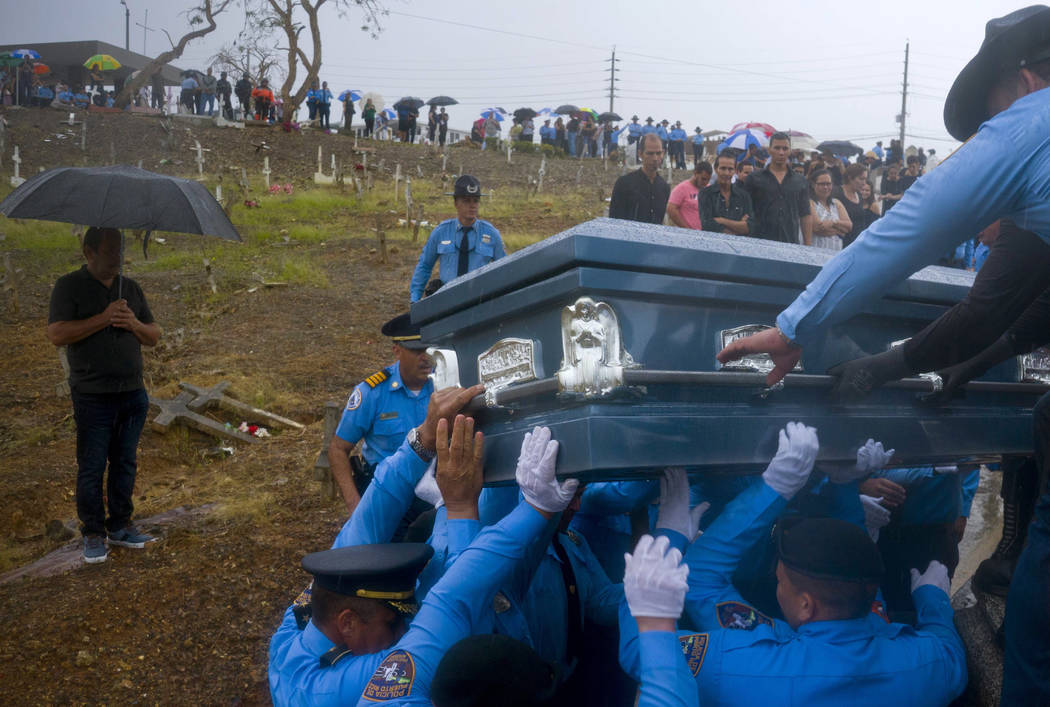 Police lift the coffin of fellow officer Luis Angel Gonzalez during his funeral at the cemetery in Aguada, Puerto Rico, Sept. 29, 2017. Gonzalez died when he tried to navigate a river crossing in his car during the passing of Hurricane Maria. (Ramon Espinosa/AP, File) 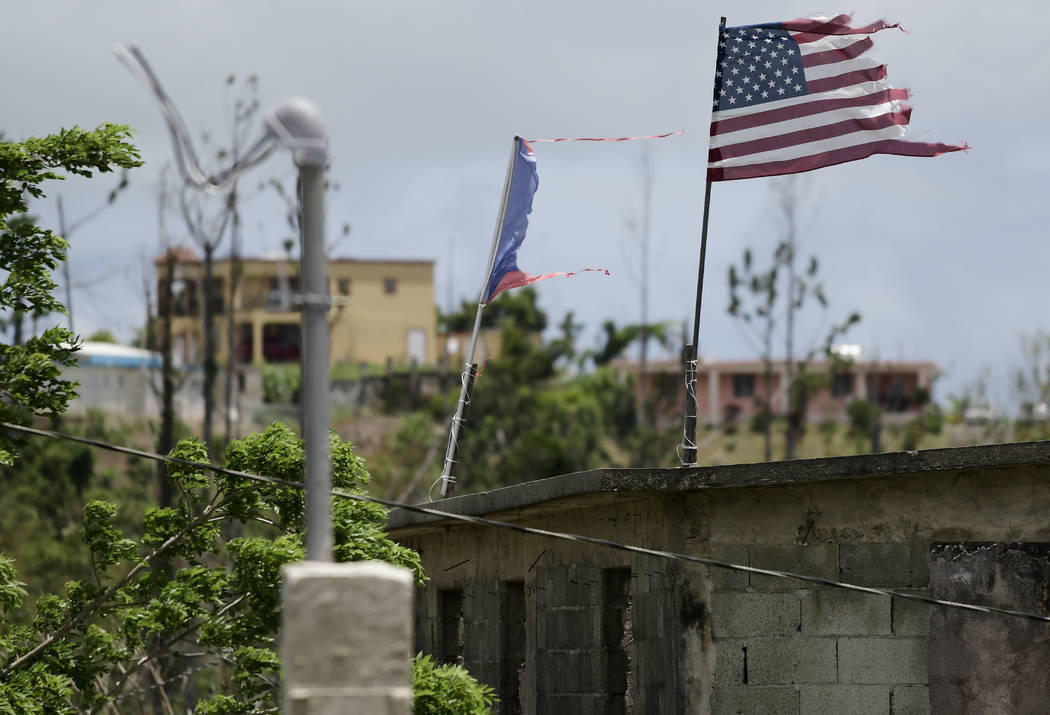 Deteriorated U.S. and Puerto Rico flags fly on a roof eight months after the passing of Hurricane Maria in the Barrio Jacana Piedra Blanca area of Yabucoa, a town where power was knocked out by the storm, May 16, 2018. Though President Donald Trump continued one year after the storm to assert that his administration's efforts in Puerto Rico were "incredibly successful," both the local and federal governments have been heavily criticized for inadequate planning and post-storm response. (Carlos Giusti/AP, File) 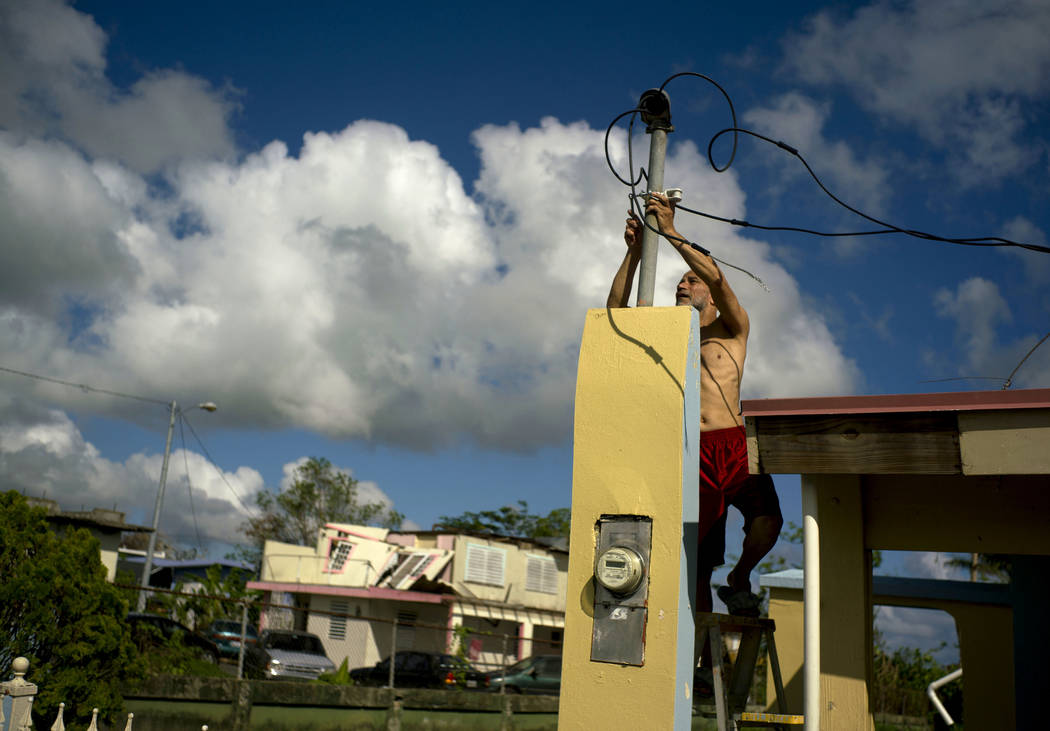 A resident tries to connect electrical lines downed by Hurricane Maria in preparation for when electricity is restored in Toa Baja, Puerto Rico, about three weeks after the storm, Oct. 13, 2017. Largely due to decades of neglect and years of fiscal crisis, the Puerto Rican electrical grid collapsed into the United States' longest-ever blackout after Maria hit on Sept. 20, 2017. (Ramon Espinosa/AP, File) 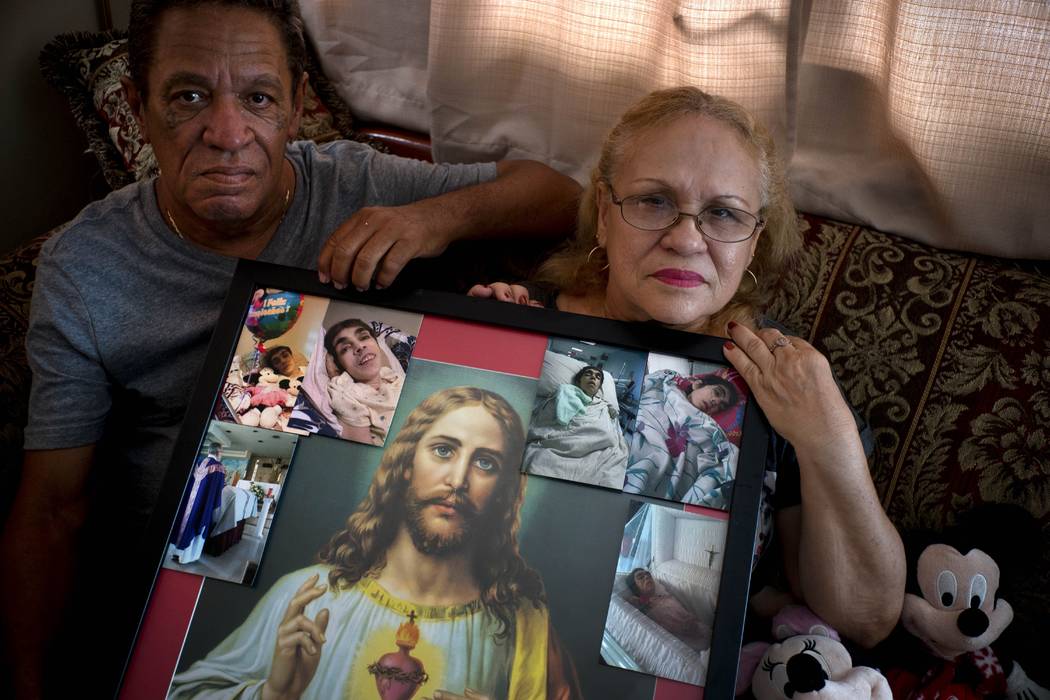 In this Sept. 4, 2018 photo, Maria Gonzalez Munoz, right, and Juan Manuel Gonzalez, pose with an image of Jesus surrounded by photos of her sister Ramona, when she was sick and during her funeral, in San Juan, Puerto Rico. Ramona, a disabled, 59-year-old who suffered from a degenerative brain disease, did not drown when Hurricane Maria drenched Puerto Rico, but instead she died a month later from sepsis, caused, says her family, by an untreated bedsore. Maria spent 30 days after the storm caring for her sister in her blacked-out home. (Ramon Espinosa/AP, File) 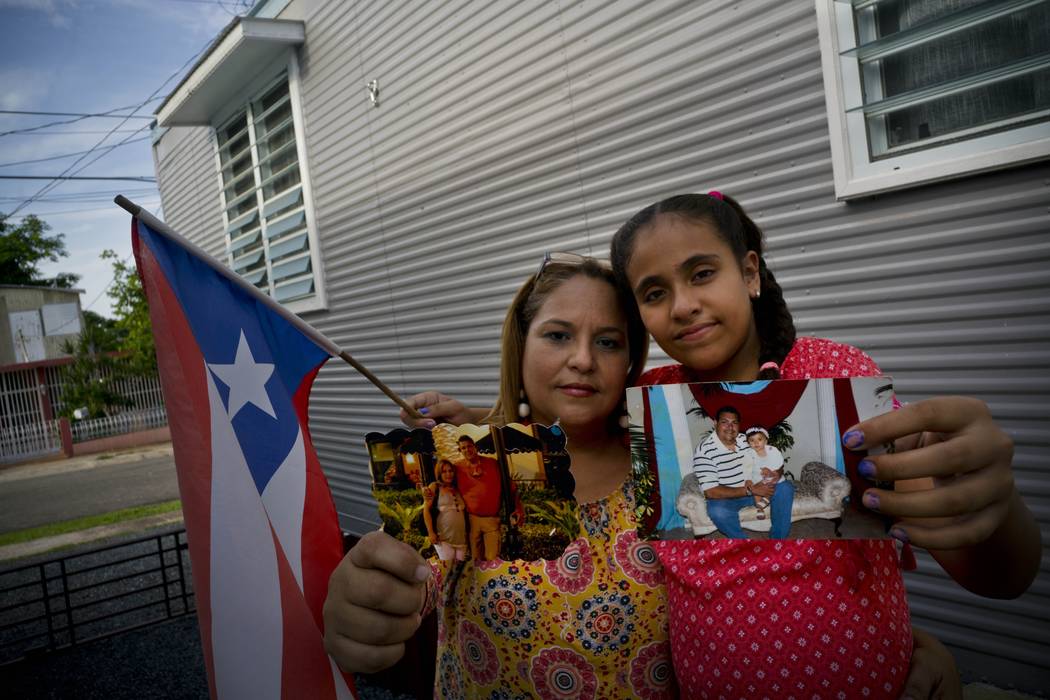 Lady Diana Torres, left, and her daughter Paula Nicole Lopez, pose with photos of their late husband and father Orlando Lopez Martinez, in Aguadilla, Puerto Rico, Sept. 5, 2018. Lopez, who died at age 48 on Oct. 10, developed diabetes when he was 11, forcing him to begin dialysis. The center where he received dialysis shut down after Hurricane Maria hit, and after missing some treatments over more than a week, the center rationed his dialysis, according to friends and family. (Ramon Espinosa/AP, File) 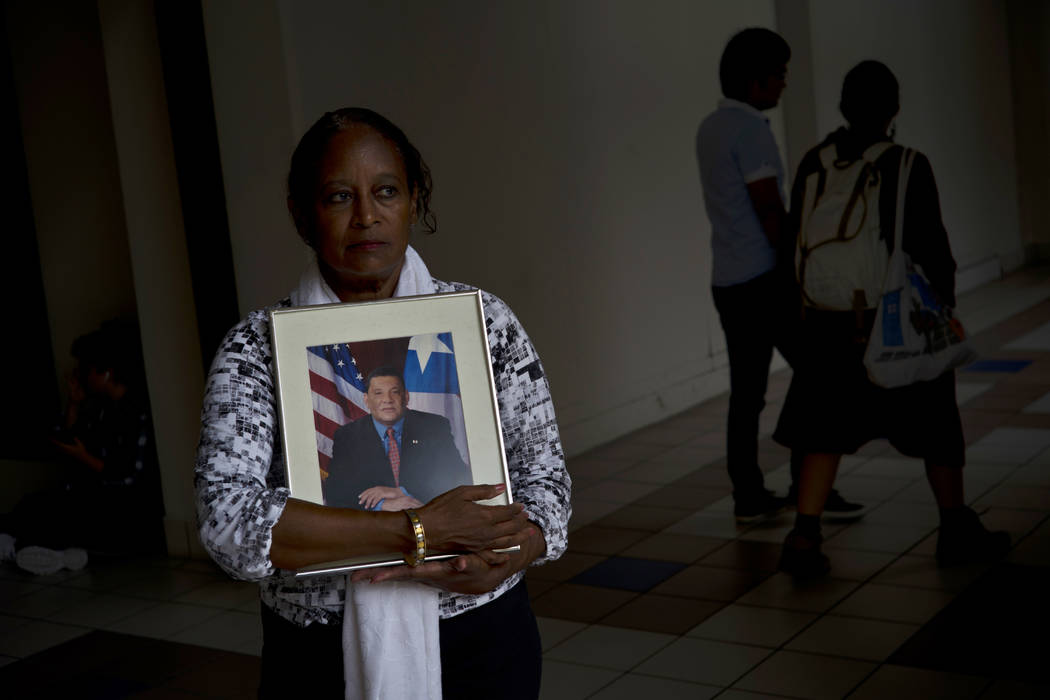 Gloria Rosado Ortiz poses with an image of her late husband, Ernesto Curiel, in San Juan, Puerto Rico, Sept. 4, 2018. Curiel, a 60-year-old who had heart problems and diabetes, walked 10 flights of stairs to the ground floor of his condominium, twice a day, to get insulin from a refrigerator cooled by a generator after Hurricane Maria hit. On Oct. 29, he died of a heart attack. (Ramon Espinosa/AP) 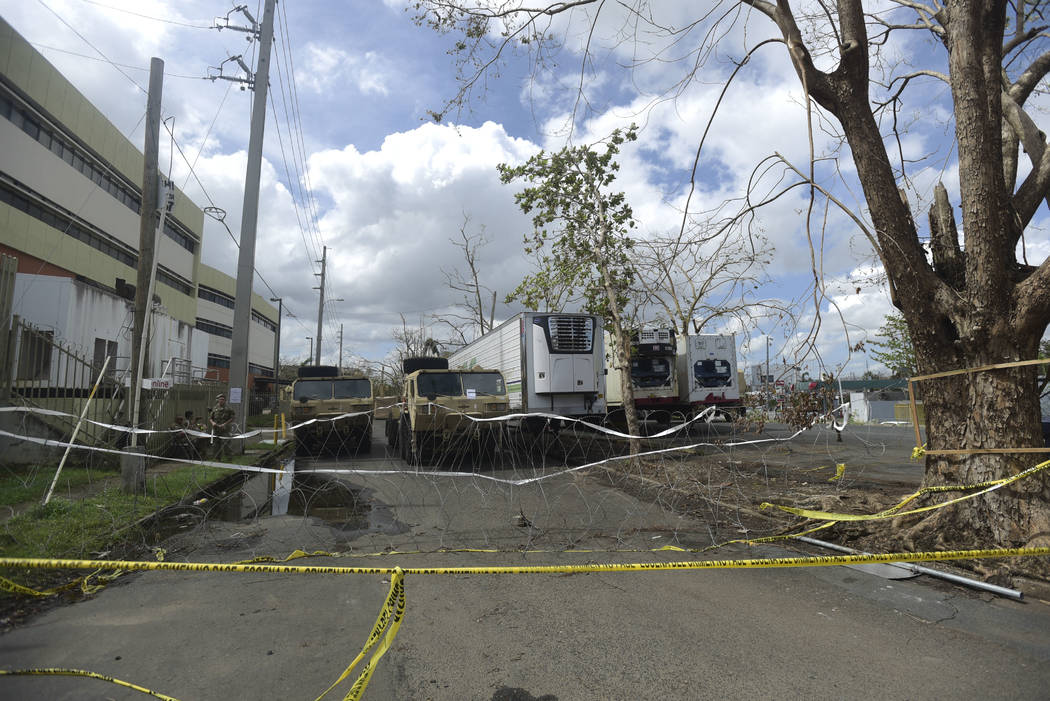 Three containers for holding corpses, right, sit parked outside the Institute of Forensic Science, on Oct. 2, 2017. The containers were brought to give support in the aftermath of Hurricane Maria in San Juan, Puerto Rico, where the institute press spokesman confirmed their facilities no longer provided enough space to store bodies, and that several hospital morgues are also full. (Carlos Giusti/AP, File) 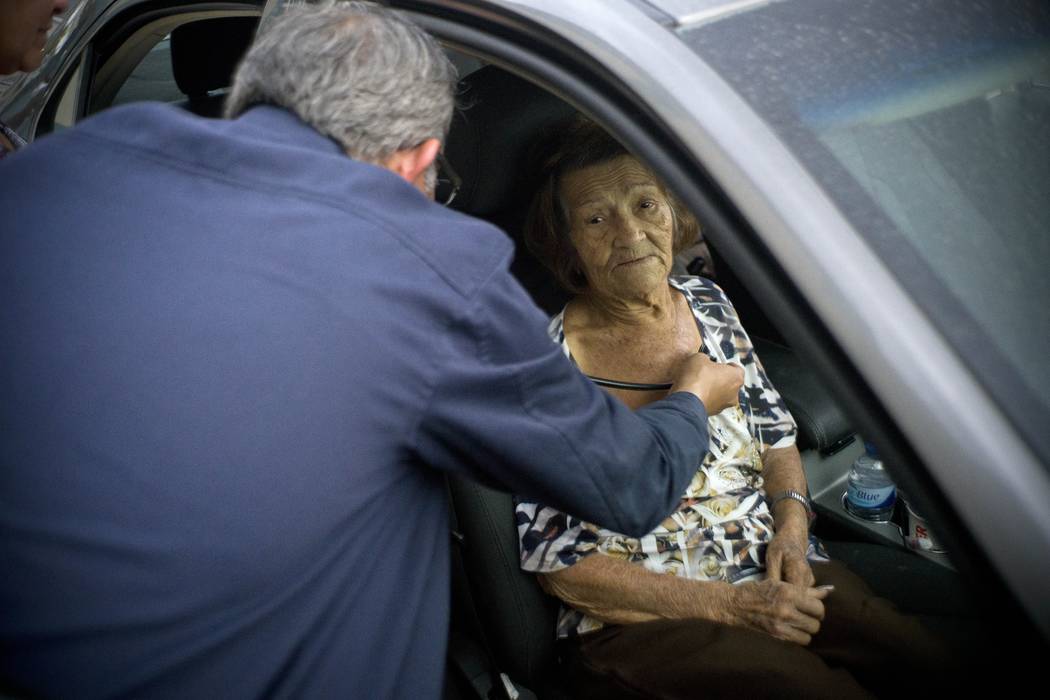 Carmen Hernandez, who lives in a senior living facility that lacks water and electricity in the wake of Hurricane Maria, is evaluated by a doctor after she fell, as she sits still for the doctor inside a car parked outside the hospital for lack of space in Bayamon, Puerto Rico, Sept. 28, 2017. (Ramon Espinosa/AP, File) 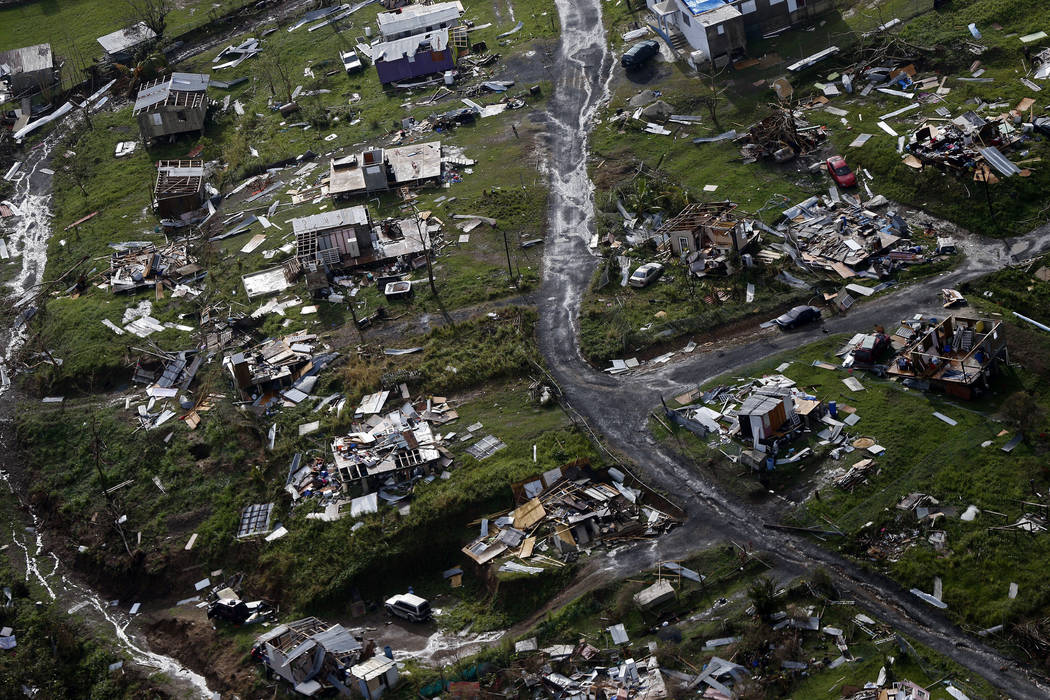 The rubble of homes are scattered in the aftermath of Hurricane Maria in Toa Alta, Puerto Rico, one week after the storm hit, Sept. 28, 2017. Puerto Rico's governor said one year after the storm that his administration has adopted new measures to better prepare for a disaster like Maria although he warned of limitations given the U.S. territory's economic crisis. (Gerald Herbert/AP, File) 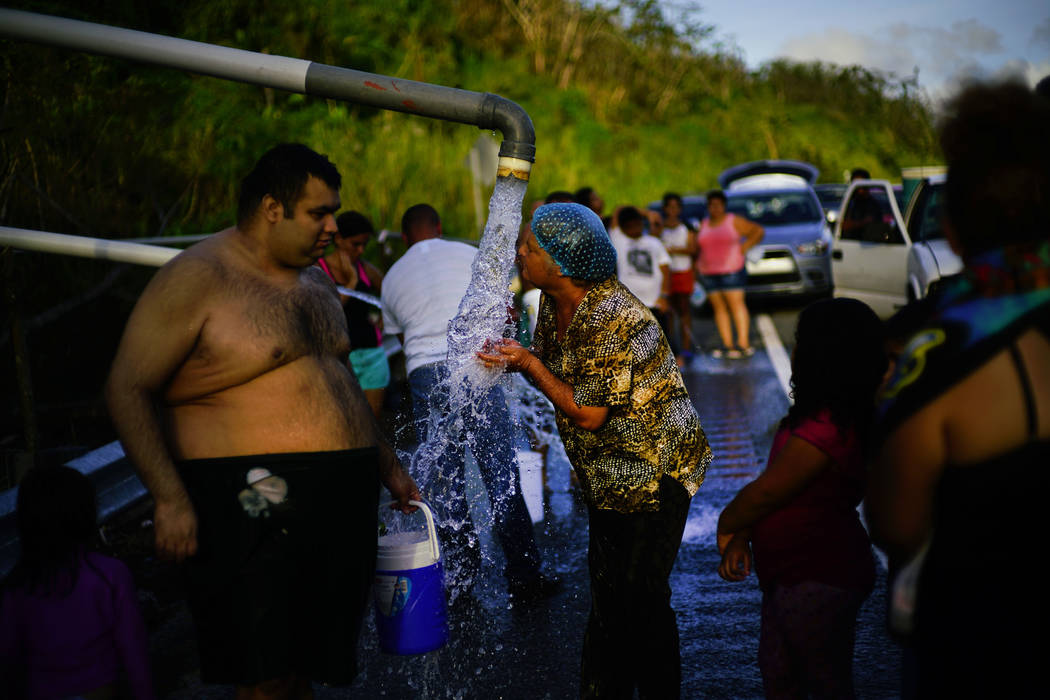 FILE - In this Oct. 14, 2017 file photo, people who lost access to water in the wake of Hurricane Maria gather at pipes carrying water from a mountain creek, on the side of the road in Utuado, Puerto Rico, almost one month after the storm hit. An after-action report by FEMA found it had underestimated the food and fresh water needed, and how hard it would be to get supplies to the island. (Ramon Espinosa/AP, File) 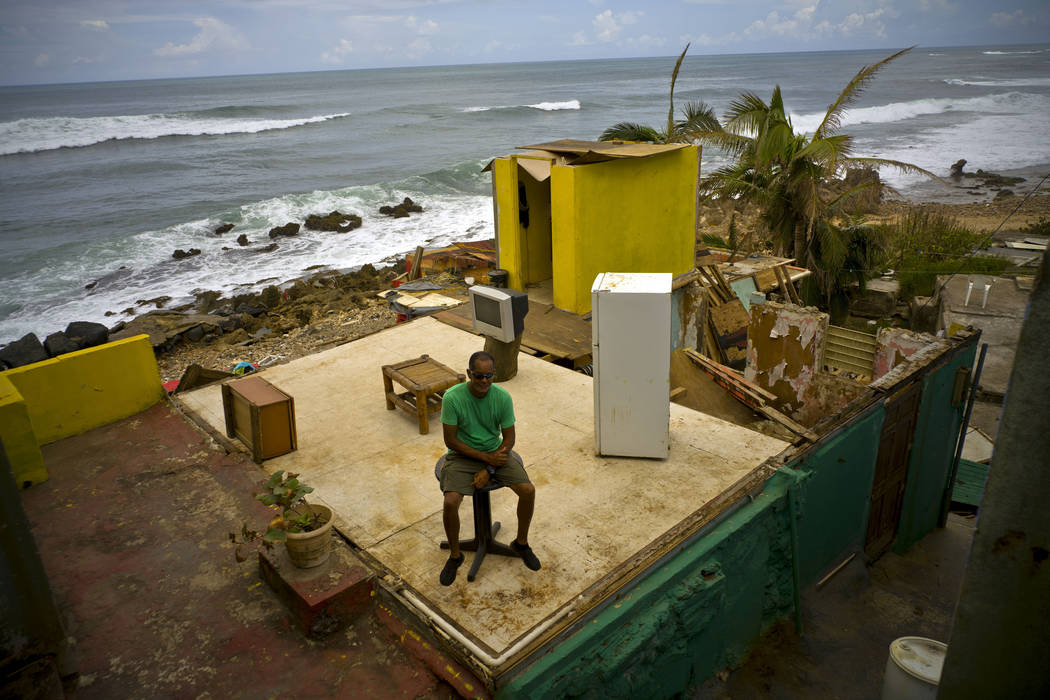 Roberto Figueroa Caballero sits in his home destroyed by Hurricane Maria, two weeks after the storm hit La Perla neighborhood on the coast of San Juan, Puerto Rico, Oct. 5, 2017. Figueroa, who wanted to stay at home with his dog during the storm, said he was evicted by police and taken to a shelter for the night. (Ramon Espinosa/AP, File) 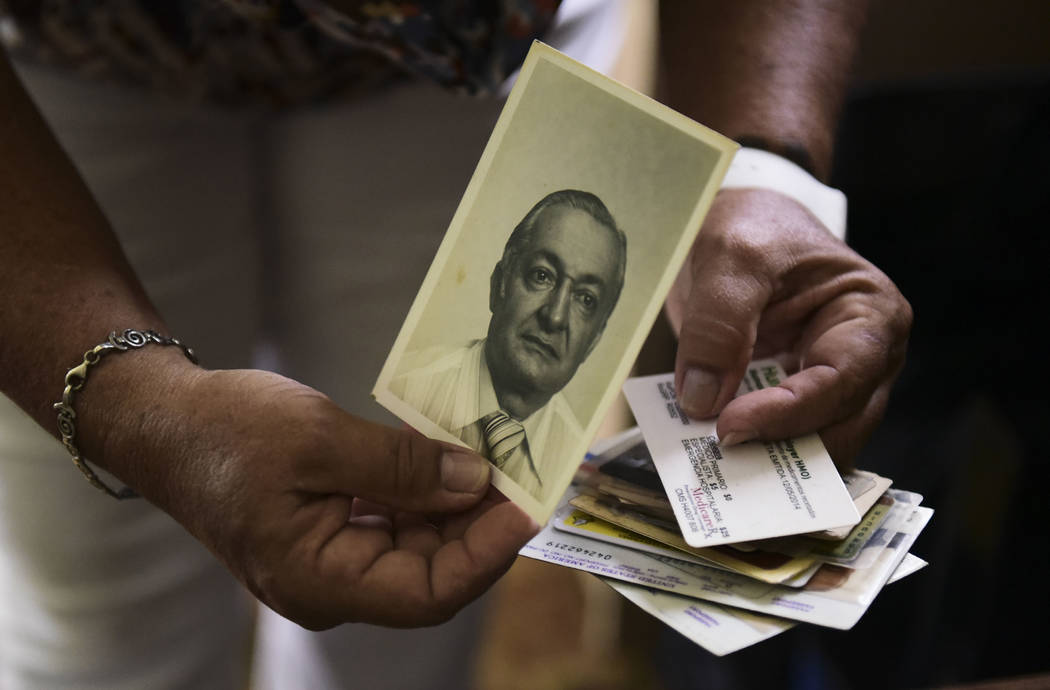 Nerybelle Perez holds a picture of her father, World War II veteran Efrain Perez, June 7, 2018. Her father died inside an ambulance after being turned away from the largest public hospital when it had no electricity or water, days after Hurricane Maria hit Guaynabo, Puerto Rico. (Carlos Giusti/AP, File)

SAN JUAN, Puerto Rico — Ramona Gonzalez did not drown when Hurricane Maria drenched Puerto Rico. She did not die in the tempest, or from destruction wrought by the storm’s 154 mph (248 kph) winds.

Instead, this disabled, 59-year-old woman died a month later, from sepsis — caused, says her family, by an untreated bedsore.

In all, the storm and its aftermath took the lives of unfortunates like Gonzalez and thousands of others, many of whom could have been saved with standard medical treatment. This was a slow-motion, months-long disaster that kept Puerto Ricans from getting the care they needed for treatable ailments, even as President Donald Trump lauded his administration’s response.

A year after Maria roared across the Caribbean, reporters for The Associated Press, the news site Quartz and Puerto Rico’s Center for Investigative Journalism have put together the most detailed portrait yet of the agonizing final days of victims of the storm, interviewing 204 families of the dead and reviewing the accounts of 283 more to tell the stories of heretofore anonymous victims.

Trump cast doubt on the storm’s widely accepted death toll Thursday, tweeting that “3000 people did not die” when Maria hit after a near-miss by Hurricane Irma in September 2017. He said the death count had been inflated “by the Democrats in order to make me look as bad as possible,” by adding unrelated deaths to the toll from causes like old age.

But the joint investigation reflects how Puerto Rico’s most vulnerable fell victim to the dire conditions created by the storms.

Disabled and elderly people were discharged from overwhelmed hospitals with bedsores that led to fatal infections. Medical oxygen ran out. People caught lung infections in sweltering private nursing homes and state facilities. Kidney patients got abbreviated treatments from dialysis centers that lacked generator fuel and fresh water, despite pleas for federal and local officials to treat them as a higher priority, according to patient advocates.

Along with post-storm conditions, each death has a complex mix of causes making it difficult to definitively apportion blame in every case. But critics say many could have been saved by better preparation and emergency response.

“I was looking for help and no one came,” said Maria Gonzalez Munoz, who spent 30 days after the storm caring for her sister in her blacked-out home.

Maria and her brother took Ramona to a hospital twice, and tried to get her aboard a Navy medical ship in San Juan harbor, but couldn’t save their ailing sister.

“No one was asking after us, no one from the government,” said Gonzalez Munoz, 66.

The hurricane’s true death toll has fueled debate since the first days of the storm, in large part because of the near-unique nature of the disaster.

Largely due to decades of neglect and years of fiscal crisis, the Puerto Rican electrical grid collapsed into the United States’ longest-ever blackout after Maria hit on Sept. 20, 2017. That spawned a long and deadly tail for the storm, with hundreds of deaths coming long after the first weeks of the storm, as medical equipment failed and sick people weakened in the suffocating heat.

Researchers from George Washington University hired by Puerto Rico’s government estimated last month that 2,975 people had died because of Maria in the six months after landfall, a number Puerto Rico accepted as official.

Though Trump continued to assert this week that his administration’s efforts in Puerto Rico were “incredibly successful,” both the local and federal governments have been heavily criticized for inadequate planning and post-storm response. The GWU report found that Puerto Rico had no plan for communication with its citizens in a crisis. The Center for Investigative Journalism found in May that the island’s health department had no emergency response plan for hospitals and other medical facilities.

As for the Trump administration, more than half of federal emergency personnel in Puerto Rico were not qualified for their assigned tasks as of October 2017, a month after landfall, according to a Sept. 5 report by the U.S. Government Accountability Office.

Puerto Rican officials did not respond to request for comment.

Ramona Gonzalez’s sister said she had long suffered from a degenerative brain disease that left her unable to get out of bed starting more than two years before the storm. Without air-conditioning or power, she developed steadily worsening bedsores. She was admitted and sent home twice from overwhelmed San Juan hospitals, even though her relatives said they were unable to treat her sores.

Desperate, Ramona’s siblings tried to get her aboard the USNS Comfort, a Navy hospital ship that had arrived in Puerto on Rico Oct. 3. But patients needed to be referred by San Juan’s main public hospital rather than showing up directly for treatment, a complicated process.

Ramona Gonzalez died in hospital the next day. Her doctor did not answer phone calls or text messages seeking comment.

Puerto Rico’s governor said last week that his administration has adopted new measures to better prepare for a disaster like Maria although he warned of limitations given the U.S. territory’s economic crisis.