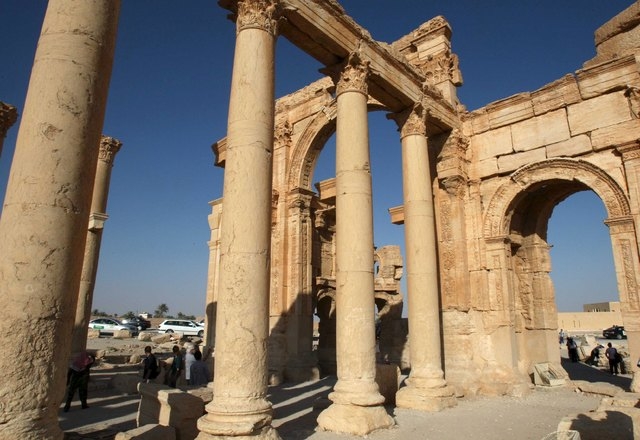 Tourists walk in the historical city of Palmyra, May 13, 2010. Islamic State fighters in Syria have entered the ancient ruins of Palmyra after taking complete control of the central city, but there are no reports so far of any destruction of antiquities, a group monitoring the war said on May 21, 2015.b (Reuters/Mohamed Azakir) 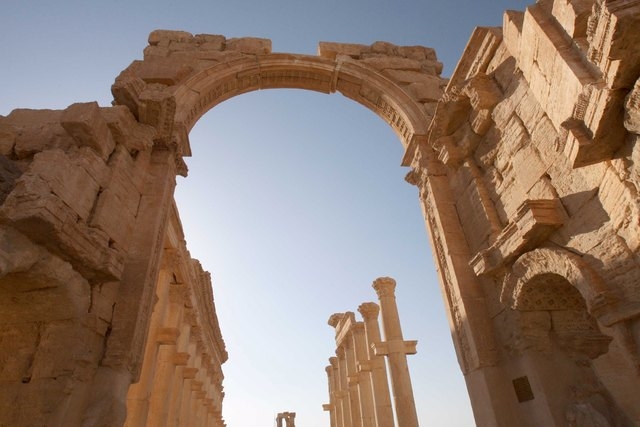 Ruins are pictured in the historical city of Palmyra, May 13, 2010. Islamic State fighters in Syria have entered the ancient ruins of Palmyra after taking complete control of the central city, but there are no reports so far of any destruction of antiquities, a group monitoring the war said on May 21, 2015. (Reuters/Mohamed Azakir) 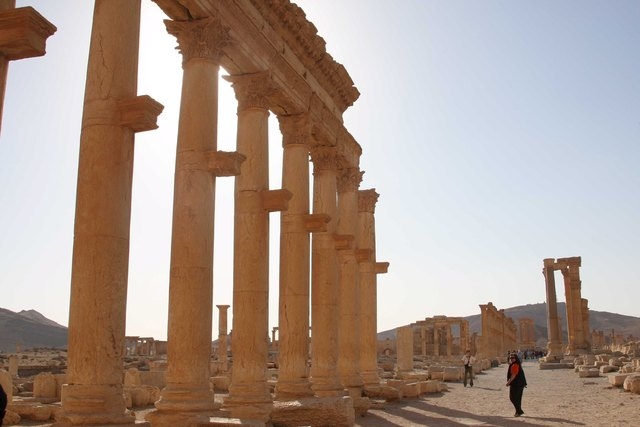 Tourists walk near columns in the historical city of Palmyra, May 13, 2010. (Reuters/Mohamed Azakir)

BEIRUT — Islamic State fighters tightened their grip on the historic Syrian city of Palmyra on Thursday and overran Iraqi government defenses east of Ramadi, the provincial capital that they had seized five days earlier.

The twin successes not only pile pressure on Damascus and Baghdad but also throw doubt on a U.S. strategy of relying almost exclusively on air strikes to support the fight against Islamic State.

The British-based Syrian Observatory for Human Rights said the al Qaeda offshoot now controls more than half of all Syrian territory after more than four years of conflict that grew out of an uprising against President Bashar al-Assad.

Fighters loyal to the Sunni Muslim group have also consolidated their grip on the Libyan city of Sirte, hometown of former leader Muammar Gaddafi.

The White House said the seizure of Palmyra was a “setback” for U.S.-led coalition forces in their fight against Islamic State. But spokesman Josh Earnest said President Barack Obama disagreed with Republicans demanding that he send ground troops to fight the Islamist militants.

Islamic State said in a statement posted by followers on Twitter it was in full charge of Palmyra, including its military bases, marking the first time it had taken a city directly from the Syrian military and allied forces.

The U.N. human rights office in Geneva said a third of Palmyra’s 200,000 residents may have fled the fighting in the past few days.

“ISIL (Islamic State) has reportedly been carrying out door-to-door searches in the city, looking for people affiliated with the government,” Shamdasani said. “At least 14 civilians are reported to have been executed by ISIL in Palmyra this week.”

The ultra-hardline group has destroyed antiquities in Iraq and there are fears it might now devastate Palmyra, home to renowned Roman-era ruins including well-preserved temples, colonnades and a theater.

The U.N. cultural agency UNESCO describes the site as a historical crossroads between the Roman Empire, India, China and ancient Persia and a testament to the world’s diverse heritage.

“We may have different beliefs … different views, but we have to protect such incredible vestiges of human history,” UNESCO Director General Irina Bokova told Reuters Television.

Syria’s antiquities chief Maamoun Abdulkarim told Reuters: “This is the fall of a civilization … Human, civilized society has lost the battle against barbarism.”

Al-Azhar, the center of Islamic learning in Egypt, urged the world to protect Palmyra, saying the destruction of cultural heritage was forbidden by Islam.

The Observatory’s founder, Rami Abdulrahman, said Islamic State fighters had entered the ancient sites by early on Thursday but there were no immediate reports of destruction.

Abdulrahman, who bases his information on a network of sources on the ground, said at least 100 pro-government fighters had been killed in the area since Wednesday.

The assault is part of a westward advance by Islamic State that is adding to pressures on Syria’s overstretched army and militias, which have also lost ground in the northwest and south.

Although Islamic State has seized large chunks of Syria, the areas it holds are mostly sparsely inhabited. Syria’s main cities, including the capital Damascus, are located on its western flank, along the border with Lebanon and on the coast.

Just five days before Palmyra fell, Islamic State seized Ramadi, capital of Iraq’s largest province, Anbar, where the Sunni Muslim Islamic State has tapped into resentment among local Sunnis who say they have been marginalized by Shi’ite-led governments in Baghdad.

Police and pro-government tribal fighters said on Thursday that Islamic State had overrun a government defensive line in Husaiba, about six miles from the city.

Obama said the fall of Ramadi was a “tactical setback” but, in an interview released on Thursday, added that he did not think the fight against Islamic State was being lost.

“There’s no doubt that, in the Sunni areas, we’re going to have to ramp up not just training, but also commitment, and we better get Sunni tribes more activated than they currently have been,” Obama said in the interview, conducted on Tuesday with the magazine The Atlantic.

“I think Prime Minister Abadi is sincere and committed to an inclusive Iraqi state, and I will continue to order our military to provide the Iraqi security forces all assistance that they need in order to secure their country, and I’ll provide diplomatic and economic assistance that’s necessary for them to stabilize.”

Iraq’s government has ordered Shi’ite militias, some of which have close ties to Iran, to join the battle to retake Ramadi, raising fears of renewed sectarian strife.

Washington wants the counter-offensive to include both Sunni and Shi’ite forces under direct government command.

Police and pro-government Sunni fighters exchanged mortar and sniper fire with insurgents across the new frontline in Husaiba al-Sharqiya, about halfway between Ramadi and the Habbaniya base, where security forces and Shi’ite paramilitaries are massing to try to retake the city.

Habbaniya is one of only a few pockets of government-held territory in Anbar, and lies between Ramadi and the town of Falluja, which has been controlled by Islamic State for more than a year.

The United States plans to deliver 1,000 anti-tank weapons to Iraq in June to combat suicide bombings like those that helped Islamic State to seize Ramadi, a senior U.S. State Department official said.