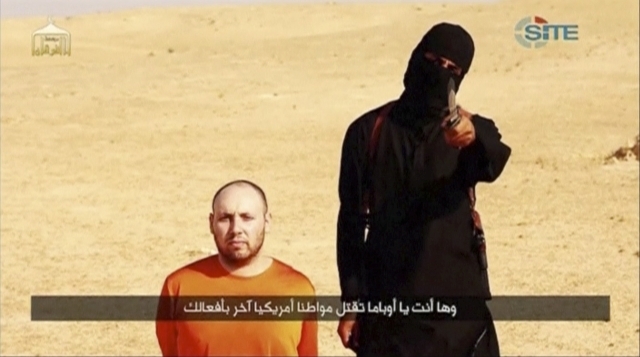 A masked, black-clad militant, who has been identified by the Washington Post newspaper as a Briton named Mohammed Emwazi, stands next to a man purported to be Steven Sotloff in this still image from a video obtained from SITE Intel Group website, Feb, 26, 2015. The "Jihadi John" killer who has featured in several Islamic State beheading videos is Emwazi, a Briton from a middle-class family who grew up in London and graduated from college with a degree in computer programming. (Reuters/SITE Intel Group via Reuters TV) 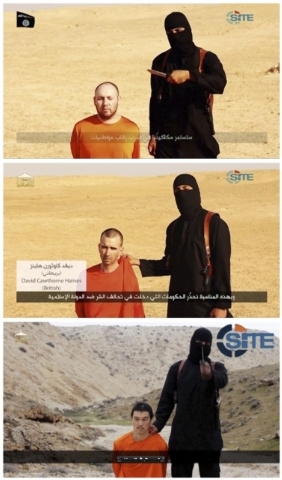 A combination photo of still images from a video obtained from SITE Intel Group website on Feb. 26, 2015, shows a masked, black-clad militant who has been identified by the Washington Post newspaper as a Briton named Mohammed Emwazi, standing next to men purported to be Steven Sotloff (top), David Haines and Kenji Goto. (Reuters/SITE Intel Group via Reuters TV) 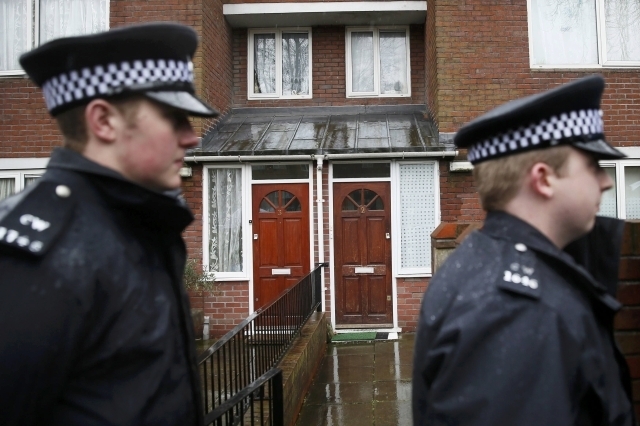 Two police officers walk outside a flat in London Feb. 26, 2015. Local media reported that the flat is the former home of Mohammed Emwazi. Investigators believe that the "Jihadi John" masked fighter who fronted Islamic State beheading videos is a British man named Mohammed Emwazi, two U.S. government sources said on Thursday. He was born in Kuwait and comes from a prosperous family in London. (Reuters/Stefan Wermuth)

The black-clad militant brandishing a knife and speaking with an English accent was shown in videos released by Islamic State apparently decapitating hostages including Americans, Britons and Syrians.

Dressed entirely in black, a balaclava covering all but his eyes and the bridge of his nose and a holster under his left arm, Jihadi John became a menacing symbol of Islamic State brutality and one of the world’s most wanted men.

Hostages called him John as he and other Britons in Islamic State had been nicknamed the Beatles.

Emwazi was born in Kuwait but came to Britain aged 6 and graduated with a computer programming degree from the University of Westminster before coming to the attention of Britain’s main domestic intelligence service, MI5.

An associate of Emwazi, who was a fluent Arabic speaker, said MI5 tried to recruit him and then prevented him from traveling abroad, forcing him to flee abroad without telling his family. He traveled to Syria around 2012.

MI5 does not publicly comment on such claims. The British government and police refused to confirm or deny his identity, citing an ongoing security investigation.

“We don’t confirm or deny matters relating to intelligence,” said a spokeswoman for Cameron, who has ordered spy agencies and soldiers to track down the killer.

”Jihadi John” rose to notoriety in August 2014 when a video appeared showing a masked man raging against the United States before apparently beheading U.S. citizen James Foley off camera.

Intelligence services in the United States and Britain used a variety of investigative techniques including voice and facial recognition as well as interviews with former hostages to identify the man, with whom MI5 had already had dealings.

But security officials made great efforts to avoid publicly naming Emwazi, fearing that would make him more difficult to catch. They were uneasy that the name was revealed.

There was no answer at two addresses in west London where Emwazi was listed to have lived. Neighbors described the family as “normal people” and “friendly.”

“This is the first time anything like this happens in this neighborhood,” said Fatima Al-Baqali. “We have to be careful now. I didn’t know this family and I usually know everyone here.”

Asim Qureshi, the research director of Cage a charity that campaigns for those detained on terrorism charges, said that although he could not be certain Emwazi was John, there were some “striking similarities.”

Qureshi painted a picture of a kind and thoughtful young man who faced harassment from MI5, which apparently suspected he wanted to join the Somali Islamist militant group al Shabaab.

“There’s one character that I remember, one kind person that I remember and then I see that image and there doesn’t seem to be a correlation between the two,” Qureshi told reporters.

“I feel like a prisoner, only not in a cage, in London..,” Emwazi wrote in an email to Cage.

He felt like “a person imprisoned and controlled by security service men, (who) stopping me from living my new life in my birthplace and my country, Kuwait”.

Cage said Emwazi was detained in Tanzania, where he went for a safari holiday with two friends in August 2009.

He was deported to Amsterdam and interrogated by MI5 and a Dutch intelligence officer and then sent back to Britain.

It was impossible to verify the version of events given by the charity, which drew criticism for shifting the responsibility for Emwazi’s crimes.

“I think this is an attempt to deflect attention from Jihadi John,” said Shiraz Maher Senior Fellow at the International Center for the Study of Radicalization, King’s College London.

“They’re trying to lay the blame for this at the feet of the British government,” he told Sky news.

The Cage charity, which also worked with Michael Adebolajo, the Muslim covert who with an accomplice killed a British soldier in London in May 2013, said both men had been victims of undue pressure from the security services.

A senior British lawmaker said there appeared to be similarities between Emwazi and Adebolajo, who hacked soldier Lee Rigby to death in broad daylight on a south London street.

“This gives echoes of the case of Adebolajo and the terrible murder of Lee Rigby,” said Menzies Campbell, a member of parliament’s Intelligence and Security Committee.

After becoming frustrated following three failed attempts to return to Kuwait, and changing his name to Mohammed al-Ayan, Emwazi left his parents’ home and slipped out of Britain.

Four months later, police visited the family home to say they had information he had entered Syria. His family thought he was in Turkey doing aid work.

He is implicated in the killing of victims including U.S. citizens James Foley, Steven Sotloff and Peter Kassig, Britons David Haines and Alan Henning, Japanese Kenji Goto and Haruna Yukawa, and over 20 Syrian soldiers.

Additional reporting by Mark Hosenball in Washington and Kate Holton in London.