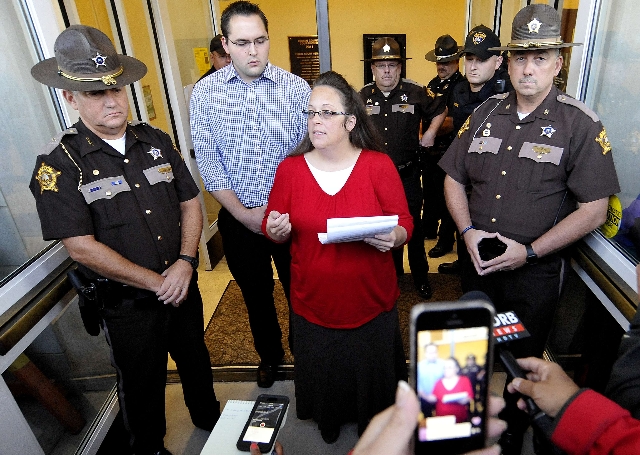 Kim Davis addresses the media just before the doors are opened to the Rowan County Clerk's Office in Morehead, Kentucky, September 14, 2015. REUTERS/Chris Tilley 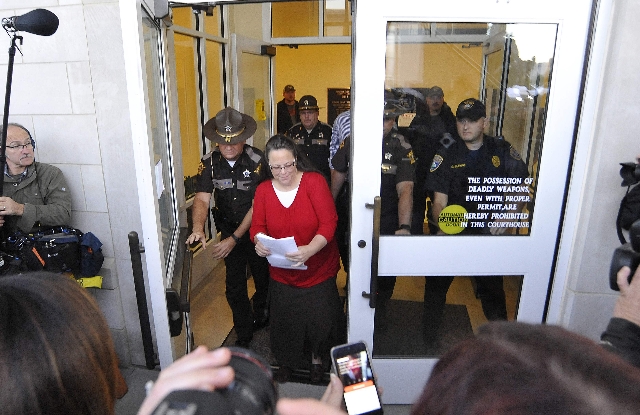 Kim Davis walks out to address the media just before the doors are opened to the Rowan County Clerk's Office in Morehead, Kentucky, September 14, 2015. REUTERS/Chris Tilley 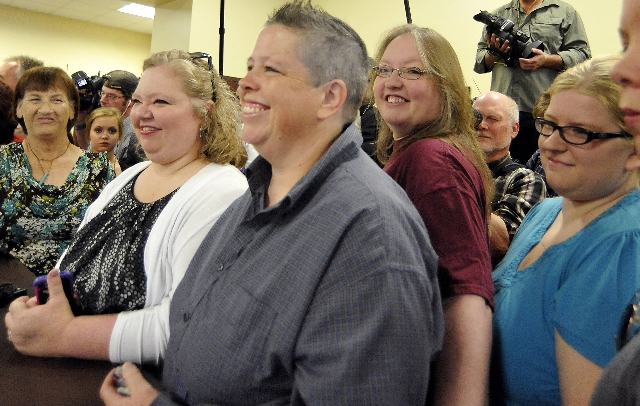 Carmen (2nd L) and Shannon Wampler-Collins wait to receive their marriage license at the Rowan County Clerk's Office in Morehead, Kentucky, September 14, 2015. Kim Davis, who was jailed after refusing to issue marriage licenses to gay couples, said Monday she will not authorize the licenses now that she has returned to work, but she will not block her deputies from issuing them. REUTERS/Chris Tilley 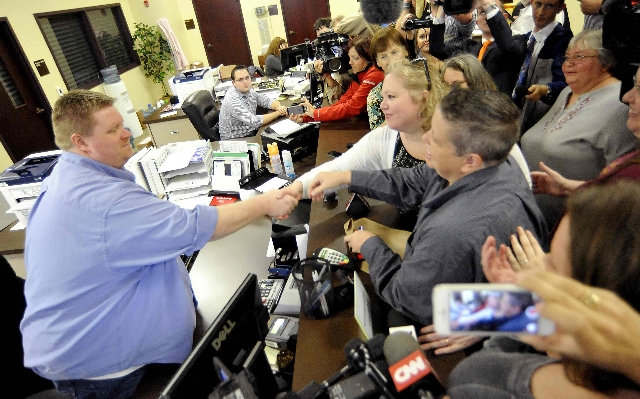 Deputy clerk Brian Mason (L) shakes hands with Carmen and Shannon Wampler-Collins after issuing them a marriage license at Rowan County Clerk's Office in Morehead, Kentucky, September 14, 2015. Kim Davis, who was jailed after refusing to issue marriage licenses to gay couples, said Monday she will not authorize the licenses now that she has returned to work, but she will not block her deputies from issuing them. REUTERS/Chris Tilley 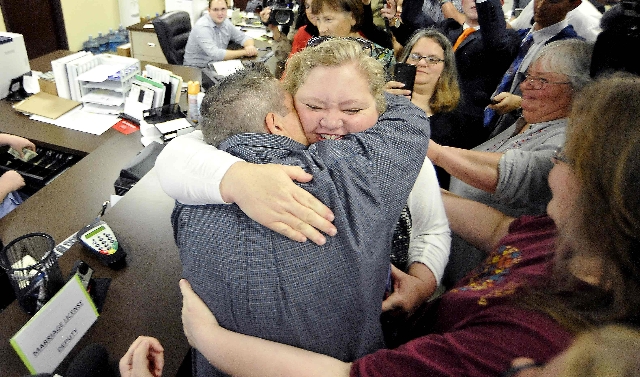 Carmen and Shannon Wampler-Collins hug after they received their marriage license from the Rowan County Clerk's Office in Morehead, Kentucky, September 14, 2015. REUTERS/Chris Tilley 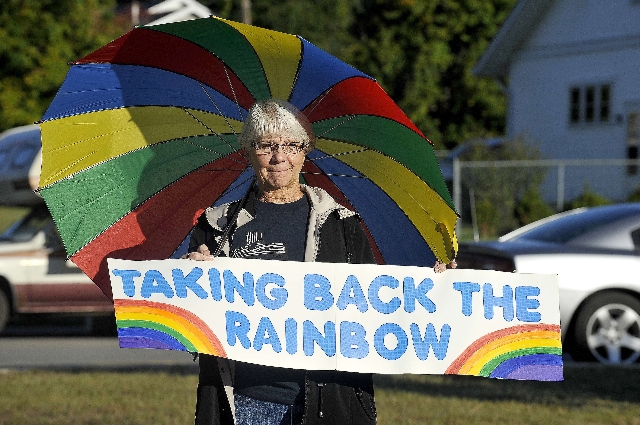 Nancy McFarland shows her support for Kim Davis at the Rowan County Clerk's Office in Morehead, Kentucky, September 14, 2015. Davis, the Kentucky county clerk who refused to issue same-sex marriage licenses, walked out of jail on Tuesday after a federal judge who found her in contempt said he was satisfied licenses were being issued in accordance with a U.S. Supreme Court decision. REUTERS/Chris Tilley 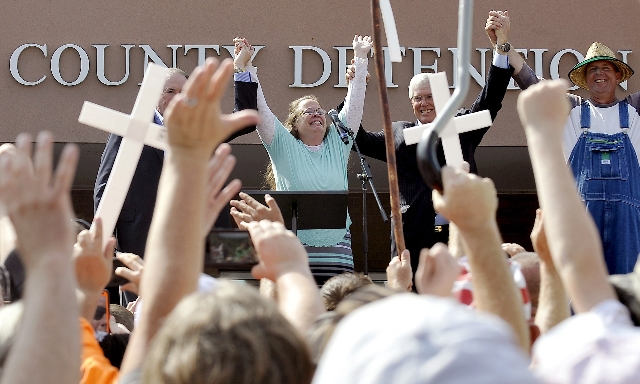 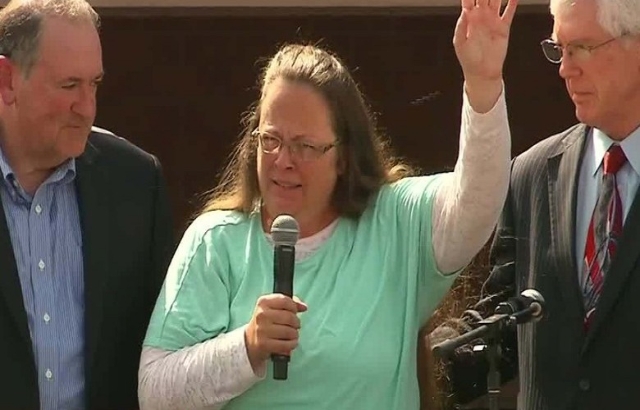 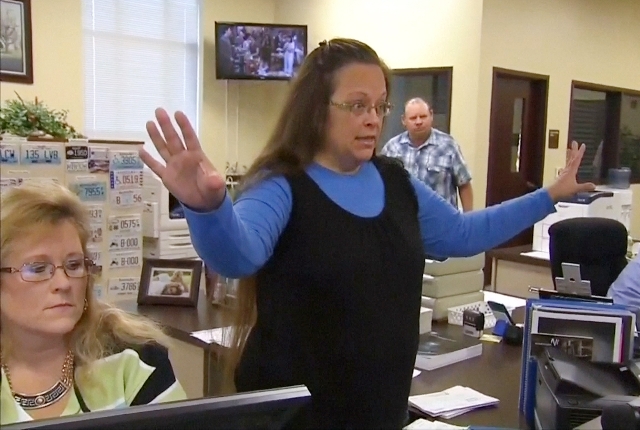 Rowan County Clerk Kim Davis gestures as she refuses to issue marriage licenses to a same-sex couple in Morehead, Kentucky September 1, 2015, in a still image from video provided by WLEX. REUTERS/WLEX/LEX18.com 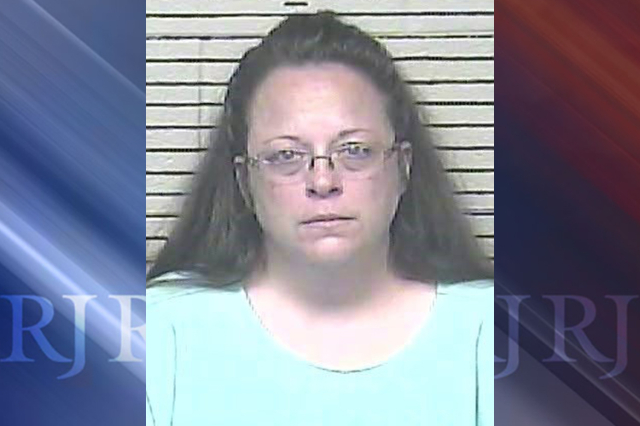 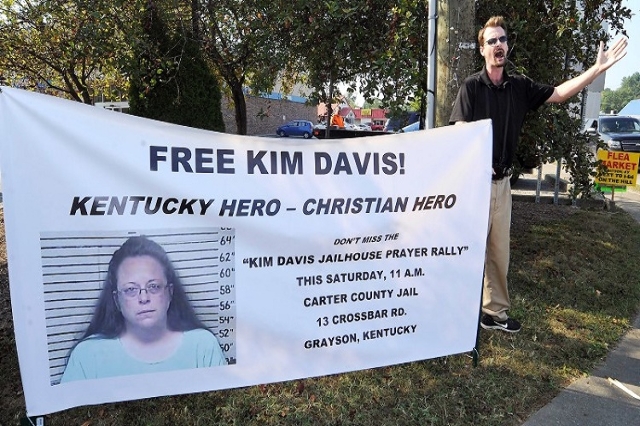 David Jordan, a member of Chirst Fellowship in North Carolina, preaches in support of the prayer rally at the Carter County Detention Center for Rowan County clerk Kim Davis, who remains in contempt of court for her refusal to issue marriage certificates to same-sex couples, in Grayson, Kentucky September 5, 2015. REUTERS/Chris Tilley

MOREHEAD, Ky. — The county clerk from Kentucky jailed after refusing to issue marriage licenses to gay couples said Monday on her return to work she will not block her deputies from issuing them but will not authorize them, as one couple celebrated their marriage.

Shannon and Carmen Wampler-Collins received a marriage license late Monday morning from a deputy clerk as friends and family in the clerk’s office chanted “love has won” while demonstrators opposed to gay marriage shouted in the background. Outside, Davis supporters called gay marriage a sin.

The couple, now 45 and 46 years old, respectively, had a commitment ceremony 20 years ago and have two sons. They legally changed their name years ago.

Elizabeth Johnston and Flip Benham, who organized rallies for Davis at the county jail, called for Deputy Clerk Brian Mason, who has been issuing licenses, to be fired.

Rowan County Clerk Kim Davis, 49, who has said her beliefs as an Apostolic Christian prevent her from issuing marriage licenses to same-sex couples, has been under the threat of returning to jail if she interfered in the issuance of licenses.

Davis said she doubted the validity of licenses that are set to be issued, which she said would state that they are being issued under U.S. District Judge David Bunning’s order.

Davis told a news conference any such licenses would not carry her name, title or personal authorization. She said she would take no action against deputy clerks who issued licenses but does not believe they have the authority to do so.

“I’m here before you this morning with a seemingly impossible choice that I do not wish on any of my fellow Americans: my conscience or my freedom,” Davis said.

Jeff Grubb, an atheist who has lived in Morehead for 30 years, told a deputy clerk he would stop paying his annual car taxes.

“She’s not doing her job, and I’m not going to use my tax money to support … this county government until they recognize the separation of church and state,” Grubb said.

The issuance of marriage licenses to same-sex couples in Kentucky and other states has become the focal point in a long-running debate over gay marriage, which became legal nationwide following a U.S. Supreme Court decision in June.

Supporters see Davis as being persecuted for her beliefs while opponents say she is abdicating her duties by trying to ban gay marriage which is now the law of the land.

Shortly after the Supreme Court ruling, Davis announced an office policy that no marriage licenses would be issued to any couples. Some who were denied licenses challenged this.

Bunning ordered Davis jailed for contempt on Sept. 3 for refusing to comply with his order to issue licenses in line with the Supreme Court ruling. He ordered her released five days later when deputy clerks were issuing licenses.

In his release order, Bunning warned Davis there would be consequences if she interfered with the issuance of marriage licenses, directly or indirectly, when she returned to work.

Davis left the jail last Tuesday to a roaring crowd of supporters, who later launched rallies demanding the firing of deputy clerks who provide licenses without her permission.

On Friday, Davis asked the Sixth Circuit U.S. Court of Appeals to allow her to continue banning marriage licenses for her entire office until a lawsuit against her is decided. Her attorneys argued Bunning’s initial order had only covered couples who were suing her.

Liberty Counsel spokeswoman Charla Bansley said on Monday they would continue to pursue appeals for Davis.

The Rowan County Rights Coalition has no objection to licenses being issued as Davis described, spokeswoman Mary Hargis said. Davis violated the civil rights of same-sex couples when she chose not to issue marriage licenses, she added.