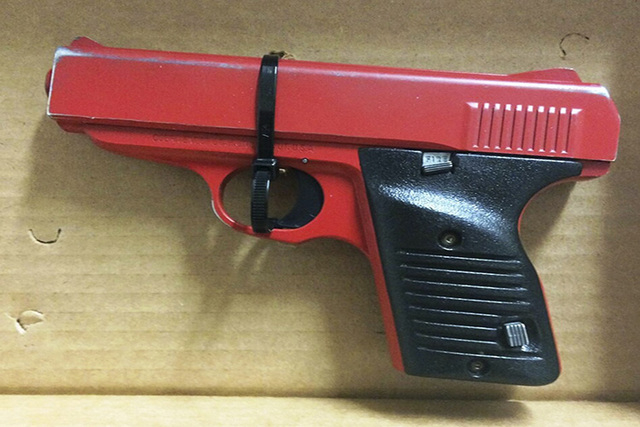 This photo provided by the Hamilton County Sheriff in Cincinnati shows a red-painted, 380-caliber handgun police found during the arrest of 23-year-old Orlando Lowery when responding to a call about a man with a gun. The arrest Friday, Dec. 12, 2014, came just four days after legislation was introduced in Ohio to require that lookalike guns be brightly colored or otherwise marked. (AP Photo/Hamilton County Sheriff)

CINCINNATI — Southwest Ohio authorities said Friday they arrested a man with a loaded handgun painted red to resemble a toy.

Police responding to a call about a man with a gun said they found Orlando Lowery, 23, with a .380-caliber handgun painted red and 9 grams of cocaine. No attorney was listed for Lowery, who was jailed on a concealed weapons charge and a drug count.

The bill, introduced Monday by Rep. Alicia Reece, would require all BB guns, air rifles and airsoft guns stand out in color or have prominent fluorescent strips. The Cincinnati Democrat named the bill after 22-year-old John Crawford III, who was carrying an air rifle this summer in a suburban Dayton Wal-Mart store when he was fatally shot by police. Police said they thought Crawford had an assault rifle. Last month, a 12-year-old boy carrying a pellet gun in Cleveland was fatally shot by police.

The legislation was modeled after a California law. Several other states and cities have similar laws.

Some opponents of the bill have expressed skepticism about whether such measures would be effective in preventing fatal shootings, and some have suggested that criminals would try to disguise weapons to cause police to hesitate.

The sheriff said his office wouldn’t get into the debate over the bill, but would provide some facts about the arrest.

“And the fact is right here in Hamilton County, we arrested a dangerous individual who we believe purposefully painted a loaded handgun red to mislead law enforcement into thinking this was a toy gun,” Neil said in statement.