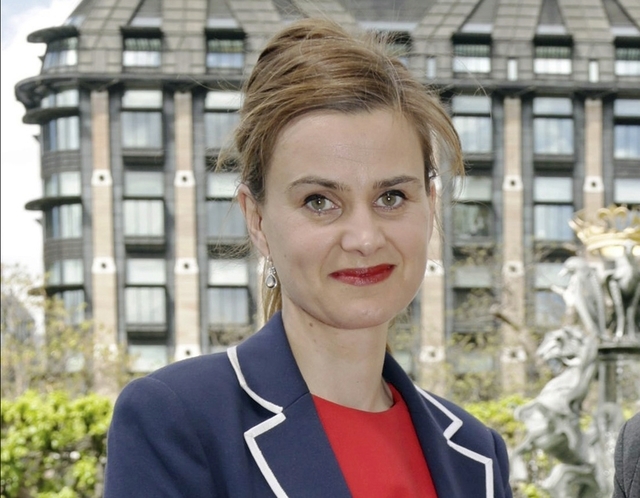 Labour Member of Parliament Jo Cox poses for a photograph, May 12, 2015. The British lawmaker was killed in a shooting and stabbing incident near Leeds, in West Yorkshire, England, Thursday June 16, 2016. (Yui Mok/PA via AP) 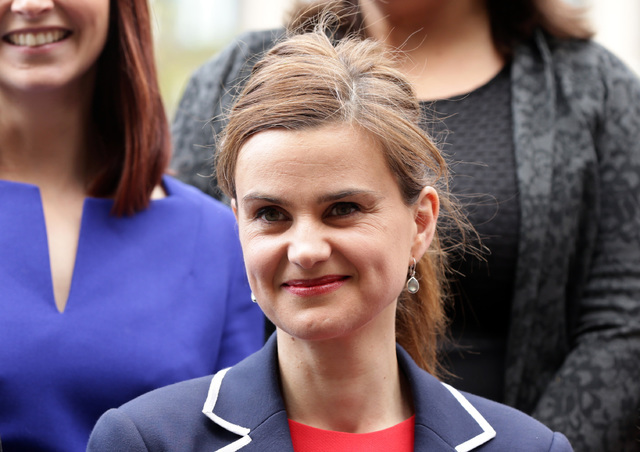 In this May 12, 2015 photo, Labour Member of Parliament Jo Cox poses for a photograph. The British lawmaker was killed in a shooting and stabbing incident near Leeds, in West Yorkshire, England, Thursday June 16, 2016. (Yui Mok/PA via AP, File) 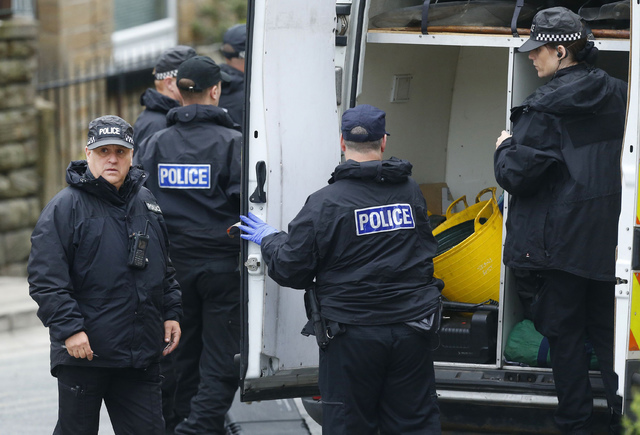 Police continue to search the crime scene in Birstall, West Yorkshire, England on June 17, 2016, the day after Labour MP Jo Cox was murdered in the street outside her constituency advice surgery. (Danny Lawson/PA via AP) 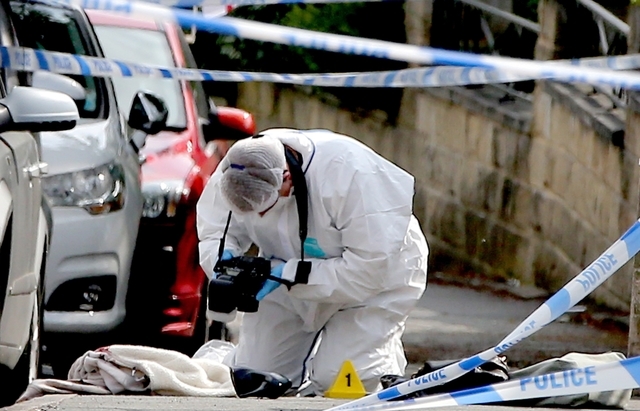 A forensics officer takes photos of a female shoe at the scene after Labour MP Jo Cox was killed being shot and stabbed in an attack in her constituency, in Birstall, West Yorkshire, England, Thursday, June 16, 2016. (Nigel Roddis/PA via AP)

BIRSTALL, England — British police on Saturday charged a reclusive gardener with murder and other offenses in the slaying of a popular Labour Party lawmaker, Jo Cox, as evidence emerged the 52-year-old had decades-old ties to a neo-Nazi movement and an interest in anarchist weapons literature.

Mair was charged with murder, grievous bodily harm, possession of a firearm with intent to commit an indictable offence and possession of an offensive weapon, Wallen said.

As detectives questioned the suspect for a second day, authorities confirmed they were focused on his alleged links to white supremacists and history of mental illness as they sought a motive for an act of violence that has shocked Britain and brought normal political life to a halt.

Prime Minister David Cameron joined the stunned citizens of Birstall in paying tribute to Cox as they placed flowers and hand-written notes on a memorial and struggled to comprehend how one of their own could have so viciously killed her.

“Today our nation is rightly shocked,” Cameron told a crowd that included witnesses to Thursday’s killing and many of Cox’s friends and colleagues, including lawmakers from both Cameron’s ruling Conservative and Cox’s opposition Labour parties. He urged the British people to drive intolerance and division “out of our public life and out of our communities.”

President Barack Obama phoned Cox’s husband from Air Force One and offered his condolences on behalf of the American people, the White House said in a statement Friday night.

“The president noted that the world is a better place because of her selfless service to others, and that there can be no justification for this heinous crime, which robbed a family, a community, and a nation of a dedicated wife, mother, and public servant,” the statement said.

Yards away, police crime-scene tape blocked off street market stalls that just a day earlier were bustling with lunchtime trade as Cox arrived outside the town’s library to field concerns from her constituents and see what she could do to fix them.

West Yorkshire’s police commander, Dee Collins, confirmed that Mair attacked the 41-year-old lawmaker as she emerged from her car alongside two aides. The attacker, she said, stabbed Cox repeatedly with a hunting knife and shot her as she lay on the ground.

Collins said Mair’s history of mental illness was “a clear line of inquiry” as were his alleged links to right-wing extremism and interest in neo-Nazi materials. She said the regional counter-terrorism unit was aiding in the investigation, in part to determine any links with other extremists, but the Birstall native was believed to have acted alone.

Another question for detectives, she said, was how Mair acquired a gun in a country that imposed a ban on handgun ownership following a 1996 school massacre in Scotland, in which a deranged gun club member killed 16 first graders and a teacher.

The Southern Poverty Law Center, a U.S.-based civil rights group that monitors hate groups, said Mair had been a supporter of the National Alliance, “the most dangerous and violent neo-Nazi group in the United States for decades.”

On its website, the center published copies of receipts from 1999 to 2003 showing that Mair ordered survivalist weapons guides and other extremist materials from the National Alliance. Among the publications were “Chemistry of Powder and Explosives” and “Improvised Munitions Handbook.”

The address on the receipts corresponded to Mair’s address in a state housing project on the edge of Birstall, where two officers kept guard Friday as detectives interviewed neighbors.

Few said they could believe the man they described as a reclusive gardener was capable of attacking anyone. The suspect’s brother, Scott Mair, told reporters his brother had a history of mental illness, but was not violent.

“When we saw his photo appear on the news as the suspect, me and my wife said, ‘Not in a million years,’” said David Hallas, a neighbor of Mair for more than a decade. “Of all the people in Birstall that I know, he would’ve been at the bottom of the list.”

Other online documentation linked Mair to a subscription to a pro-apartheid publication from South Africa, SA Patriot, and said he was one of its “earliest subscribers and supporters.”

Clarke Rothwell, a plumber who runs a cafe near the scene of Thursday’s slaying, said the assailant shouted “Britain first!” several times as he shot and stabbed Cox. An extreme right-wing group called Britain First denied any connection with Mair.

Cox was a former aid worker who championed immigrant rights, bringing an end to Syria’s civil war and keeping the United Kingdom in the European Union. The day before her killing, Cox joined her husband and two young children in campaigning for the pro-EU cause on the River Thames, where the family had lived in a houseboat since her election last year.

British voters will be asked to decide whether to keep their country in the 28-nation bloc on Thursday. Anti-EU campaigners have argued that leaving the EU would allow Britain to curtail immigration. Both sides have suspended their campaigns through Saturday following Cox’s killing, although some door-to-door leafleting was expected to resume sooner.

While the House of Commons had not been due to resume meeting until after the referendum, leaders agreed to a special recall Monday to pay tribute to Cox.

As police combed the sidewalks around the attack site Friday, some mothers walking their children to a nearby school wiped away tears. Others quietly spoke of the brutality of the killing and its exceptionally public nature.

“I can’t get my head round the fact that Jo was attacked on the streets of Birstall in broad daylight, in public,” said Tina Walker, who worked alongside Cox in promoting ethically sourced foods from developing nations — and who recalled how Cox would hug anybody she recognized in town.

“I woke up this morning and just wanted to find it hadn’t happened. I was half expecting to see her here today, because that’s how your brain plays tricks on you,” she said.

Violence against British politicians has been rare since Northern Ireland’s peace deal nearly two decades ago. Cox is the first serving lawmaker to be killed since Conservative politician Ian Gow was killed by an Irish Republican Army bomb in 1990.

While Parliament is protected by armed police, lawmakers spend much of their time in their home districts, generally without security. Since 2000, two lawmakers have been attacked and wounded while meeting constituents.

“We’ll be reviewing our security,” said Dan Jarvis, a Labour lawmaker who represents Barnsley in the neighboring South Yorkshire district, and is an army veteran who served in Iraq and Afghanistan.

“But I’ll walk through Barnsley today like every Friday,” he said.