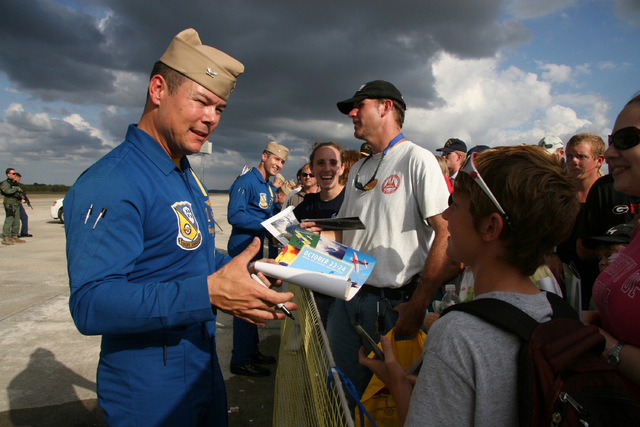 Capt. Greg McWherter, left, commanding officer of the U.S. Navy flight demonstration squadron, the Blue Angels, and Lt. Jim Tomaszeski sign autographs on Oct. 23, 2010, after performing during the NAS Jax Air Show in Jacksonville, Fla. On Tuesday, June 3, 2014, the Navy decided to give a letter of reprimand McWherter, former Blue Angels commander, accused of allowing sexual harassment in the workplace during his time as leader of the flying team. (AP Photo/U.S. Navy, Ron Trevino, File) 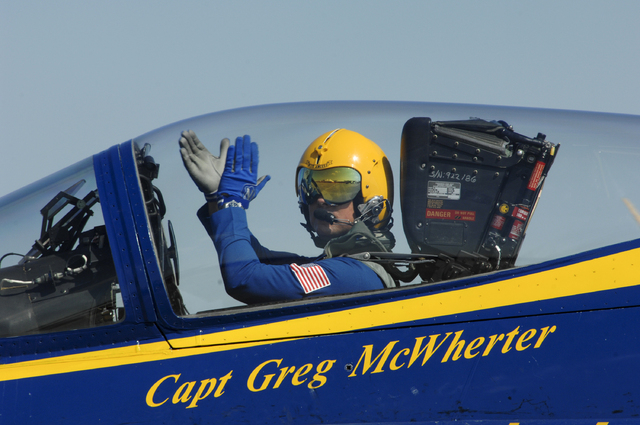 Capt. Greg McWherter, commanding officer and flight leader of the U.S. Navy flight demonstration squadron, the Blue Angels, responds to the crowd at the Guardians of Freedom Air Show in Lincoln, Neb., on Sept. 10, 2011. The U.S. Navy says McWherter has been relieved of duty over misconduct while he was commanding officer of the Blue Angels. (AP Photo/U.S. Navy, Jen Blake, File)

SAN DIEGO — A former Blue Angels commander tolerated inappropriate sexual comments and pornographic images in the workplace — including photos of naked women in the cockpits of the precision flying team’s planes, the Navy said Tuesday.

Capt. Gregory McWherter was found guilty of violating two articles under the military’s code of justice during nonjudicial proceedings convened Monday in Pearl Harbor, Hawaii. The articles were failure to obey an order or regulation and conduct unbecoming of an officer by fostering a hostile command climate and failing to stop “obvious and repeated instances of sexual harassment, condoning widespread lewd practices within the squadron and engaging in inappropriate and unprofessional discussions with his junior officers,” the Navy said in a statement.

He will be given a letter of reprimand that will go in McWherter’s permanent file and is widely seen as a career-ender in the service. McWherter told Navy officials he did not wish to speak to the media, said Cmdr. Kevin Stephens, a spokesman at Naval Air Forces.

Under McWherter’s command, pilots had explicit pornography, including photos of naked women, in aircraft cockpits, according to the investigation.

There was also a rooftop painting of male genitalia in blue and gold at the team’s winter training facilities in El Centro that could be seen by Google Maps, the Navy report stated. The painting existed through the end of the 2012 airshow season.

McWherter was relieved in April from his duty as executive officer of Naval Base Coronado in California amid the allegations during his second stint as the Blue Angels’ leader from May 2011 to November 2012. The Navy said it did not find problems during his first stint as the flying team’s commanding officer from 2008 to 2010.

“The investigation concluded that McWherter witnessed, condoned, and encouraged behavior that, while juvenile and sophomoric in the beginning, ultimately and in the aggregate, became destructive, toxic and hostile,” the Navy said in a statement.

The Navy said investigators found no evidence the behavior led to sexual assault.

Harry Harris Jr., commander of the U.S. Pacific Fleet, ordered the investigation after a service member filed an official complaint with the Navy on March 24.

The Blue Angels’ mission is to publicly represent the best of Naval Aviation, and Harris said “the actions of Capt. McWherter jeopardized that mission.”

“Commanding officers have an enduring obligation to maintain a proper work environment at all times and in all places and spaces, and they will be held accountable as appropriate when they fail,” Harris said.

Several junior personnel who served under McWherter received formal written counseling for their behavior, but McWherter was held accountable for the actions of those in his command, the Navy said.

McWherter also was president of the Tailhook Association for about eight months before he resigned amid the probe.

The San Diego-based nonprofit aviator fraternity said it knew nothing of the allegations against McWherter. The group dealt with its own scandal in 1991 when Navy pilots at its Las Vegas convention were accused of sexually abusing female officers.