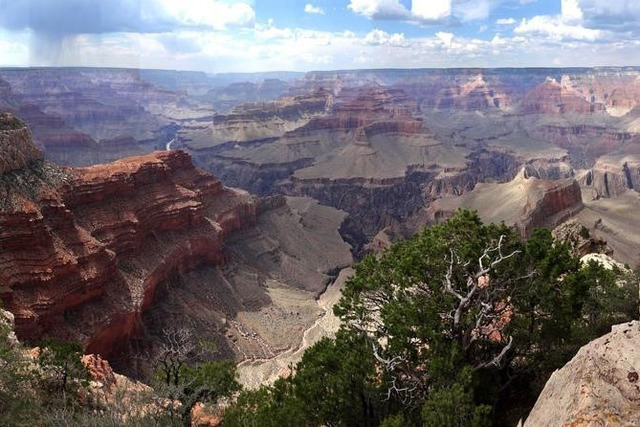 Overall view from the south Rim of the Grand Canyon near Tusayan, Arizona. (Charles Platiau/Reuters)

PHOENIX — Navajo Nation lawmakers are set to consider a highly disputed plan to develop tourist attractions at the edge of the Grand Canyon.

The Grand Canyon Escalade is a proposed aerial tram at the east rim of the canyon outside the boundaries of the national park. Tourists would be shuttled from the cliff tops of the Navajo Nation to the edge of the Colorado River below before it meets the Little Colorado River.

The area known as the confluence is roughly a 100-mile drive from Flagstaff and has no paved roads, running water or electricity. Plans call for building infrastructure, a riverside boardwalk, hotels, cultural center and places for Navajo artisans to sell their goods.

Scottsdale-based developer Confluence Partners has pitched the project as a way to create thousands of jobs for a largely jobless part of the reservation. “I can’t think of a more deserving spot in the country than these folks, who get overlooked all the time by government officials and politicians,” Confluence Partners managing partner Lamar Whitmer said.

During the past five years, the project has faced staunch opposition from the National Park Service, national environmental groups and a group of Navajos called Save the Confluence. Many argue the tram would disrupt the serenity of river rafters and a sacred site where Navajo tradition says the tribe emerged into the world.

“They have never expressed respect for the traditional, customary land users,” Save the Confluence spokeswoman Renae Yellowhorse said.

Other groups argue the project is “industrial tourism” and that it threatens the ecosystem of the Colorado river. “What’s wrong with sitting on the edge of the canyon — which literally anyone can do — and enjoying the splendor of the place in a quiet, contemplative manner?” American Rivers spokesman Sinjin Eberle said.

American Rivers has spoken out against the project, saying it’s unnecessary and disrespectful. “Is that how we want to treat our national parks? Do we want to turn them into amusement parks?” he said.

The Navajo Council has ultimate authority over developments on the reservation, but the plan could face lawsuits by local herders and by the Hopi Tribe, which also considers the area sacred. The National Park Service also could oppose the tram in court as it has disputed whether its boundary with the reservation is at the river or at the cliff.