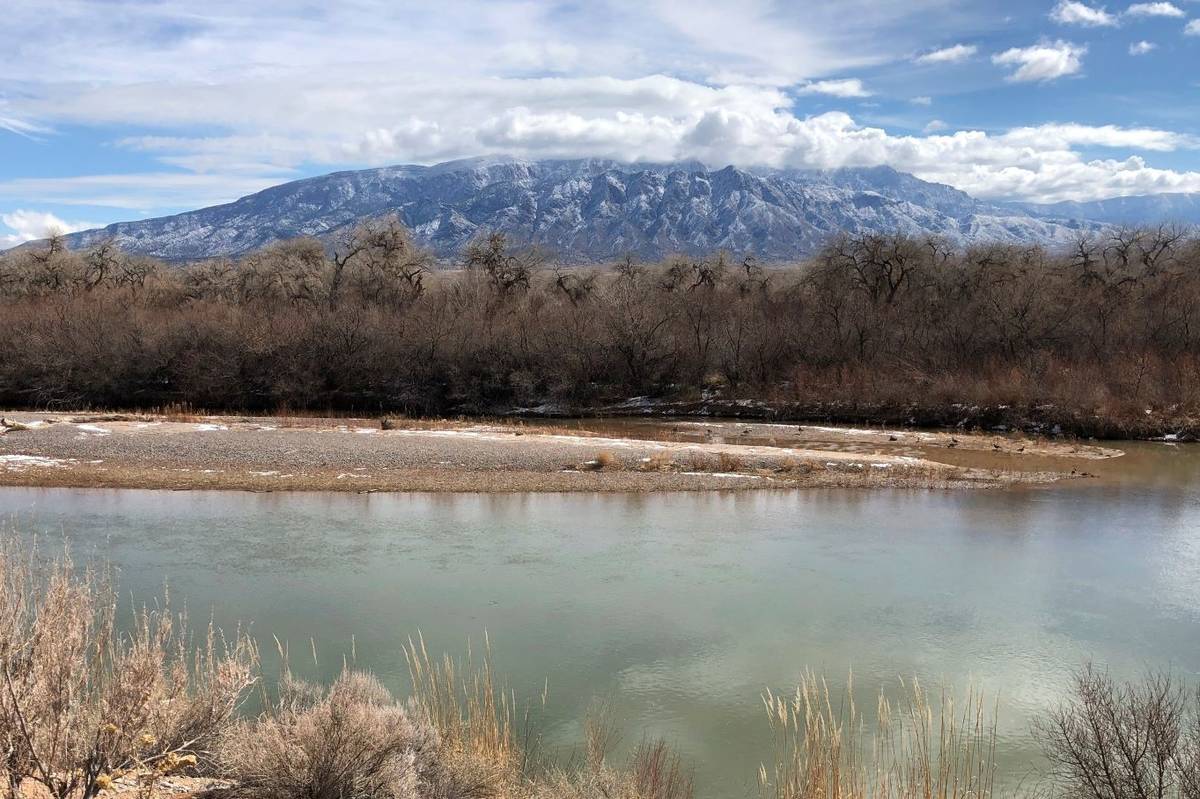 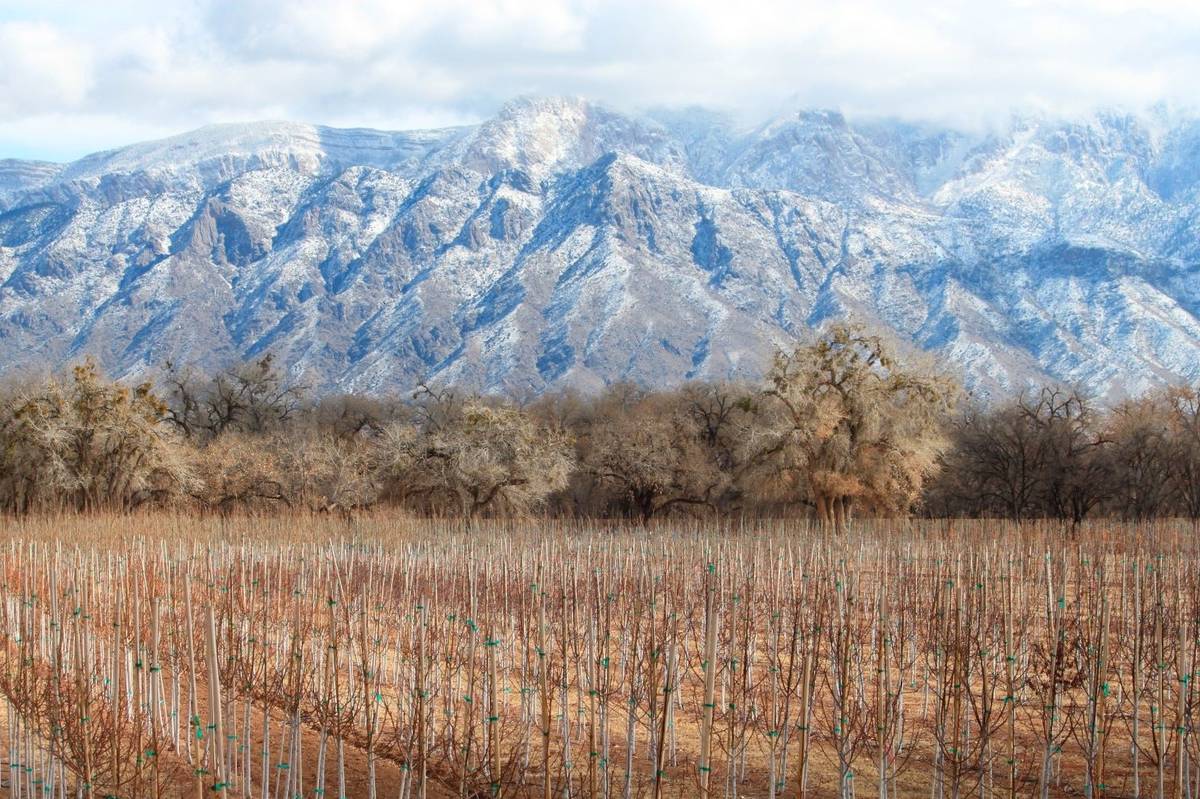 Rows of trees are seen at a farm in Corrales, New Mexico, as snow covers the Sandia Mountains in February 2021. (AP Photo/Susan Montoya Bryan)

While the recent snow has provided a psychological salve to the pains of a persistent drought, it won’t go far in easing the exceptional conditions that have taken hold of New Mexico over the past year.

Every square mile of the arid state is dealing with some level of dryness, with more than half locked in the worst category — exceptional drought. And much of the West is no better off, with parts of Arizona, Utah and Nevada among the hardest hit.

Drop in the bucket

The problem is the recent storms were accompanied by frigid temperatures and wind, making for a double whammy of sorts. Forecasters explained that snow tends to be drier when temperatures are that cold, so there’s less water content in the snow. The wind then blows it away, leaving patches of bare ground.

Typically, about 12 inches of snow make for an inch of water when it melts, said Kerry Jones, chief meteorologist with the National Weather Service in Albuquerque. With colder air, those ratios climb and nearly triple the amount of snow is needed to produce that same inch of water.

That means less water to recharge the soil and less that will find its way into rivers and reservoirs this spring.

“Ultimately that’s kind of what matters in terms of water supply — how much water is in the snowpack,” Jones said.

A good example can be found on Sierra Blanca, a mountain peak in southern New Mexico. The snow-water equivalent measured there is less than an inch, or about 10% of normal, even after the storms.

The Rio Chama basin in northern New Mexico has fared better, but even after the storms it lagged at about 86% of normal. Meanwhile, the headwaters of the Pecos River in the Sangre de Cristo range dropped to just 44% of normal.

“While we welcome each and every storm and the benefit they bring to our water supply, we must recognize that this is only a drop in the bucket in replenishing our reservoirs,” said Mary Carlson, a spokeswoman for the Bureau of Reclamation, the federal agency that manages water in the West.

Deeper in the hole

Many places already were dealing with deficits as winter snowpack and spring runoff have become less reliable in recent years. Add to that a contracting monsoon season.

Summer rains were spotty at best across New Mexico, while the mountain city of Flagstaff, Arizona, marked its second consecutive driest monsoon season on record in 2020.

“The scary part about it is the fact that we count on monsoon season to kind of help out, especially with agriculture, farming and ranching and that sort of thing,” Jones said. “We’ve come to rely on it because we’re not getting the water supply with our snowpack and if we don’t get a good monsoon season, it puts you that much deeper in the hole.”

That means whatever water can be squeezed out of the recent snowfall is likely to be soaked up by the dry soil before it can feed any rivers or reservoirs.

The Rio Grande — one of the longest rivers in North America — has been reduced to a trickle as it flows through the town of Bernalillo. Its meager flows follow a year in which municipal, state and federal water managers had to ink sharing agreements to keep it from drying up through the Albuquerque stretch.

Cities across the West have made exponential progress with conservation efforts over the years, while farmers have been installing drip systems, pipelines and high-tech monitors to eliminate evaporation and waste. Still, farmers and ranchers are preparing for what they call harsh realities as long-term forecasts call for more dry, warm weather.

Along the Pecos River, which supplies farms in New Mexico and Texas, irrigation managers in Carlsbad recently set the allotment for this growing season at one-quarter of an acre-foot of water based on snowpack and expected runoff.

According to district records that go back to 1908, never has the allotment been that low. It came close in 1953 with just over one-third of an acre-foot. An acre-foot equals nearly 326,000 gallons and is enough to serve one to two average households a year.

Phil King, engineering consultant for the Elephant Butte Irrigation District on the lower Rio Grande, said the northern mountain ranges are feeling the effects of La Nina, a weather pattern that results in drier conditions.

“Water and farm managers are recommended to plan accordingly for likely low spring runoff and a critically short year with an allotment of 6 inches or less,” he said. Still, that would be better than allotments in 2011 and 2013, which were also dry years.

Rough. That’s how ranchers have described current conditions to Megan Boatright, a rangeland ecologist with the State Land Office.

Like ranchers always do, they found a silver lining with the recent storms. While the snow might be too dry to put a dent in the drought, they say at least it has a better chance of soaking in rather than causing runoff and erosion. Boatright said that bit of soil moisture could have a positive effect on cool season grasses sprouting in the spring.

Continued drought has forced many ranchers to sell cattle and reduce their herds as they deal with the cost of supplemental feeding and water tanks and wells going dry.

The State Land Office this week acknowledged the added pressures and low beef prices when it set the 2021 grazing fee. It marks the fourth decrease in as many years.

“Every rancher I talk to is ‘hanging in there’ as we all hope for more rain and snow and for a successful growing season,” Boatright said.

That hope will be key, as forecasters say signals are pointing to a drier and warmer than average spring.