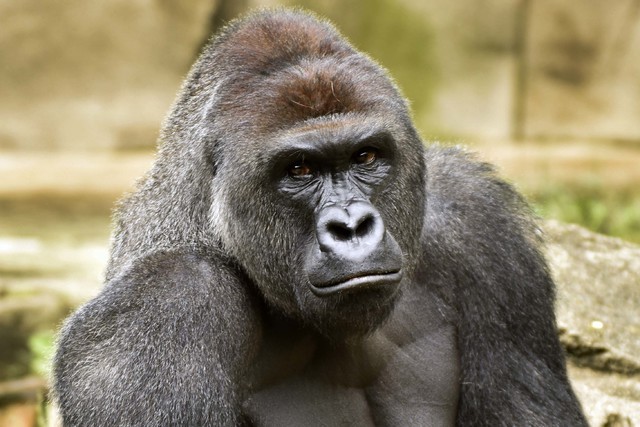 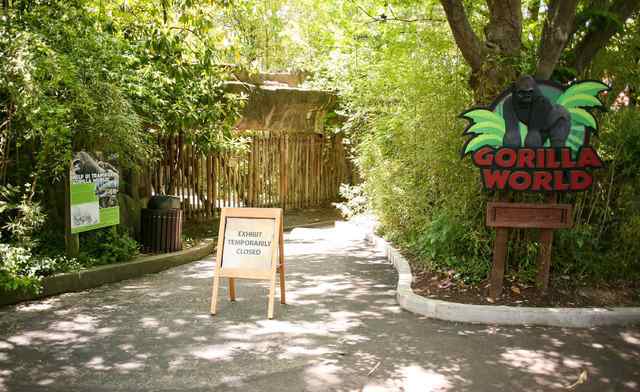 The entrance to the Cincinnati Zoo's Gorilla World exhibit is closed, two days after a boy tumbled into its moat and officials were forced to kill Harambe, a Western lowland gorilla, in Cincinnati, May 30, 2016. (William Philpott/Reuters) 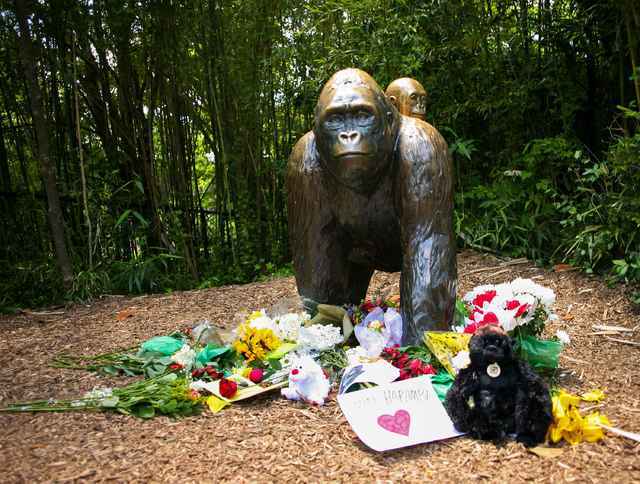 Flowers lay around a bronze statue of a gorilla and her baby outside the Cincinnati Zoo's Gorilla World exhibit, two days after a boy tumbled into its moat and officials were forced to kill Harambe, a Western lowland gorilla, in Cincinnati, May 30, 2016. (William Philpott/Reuters) 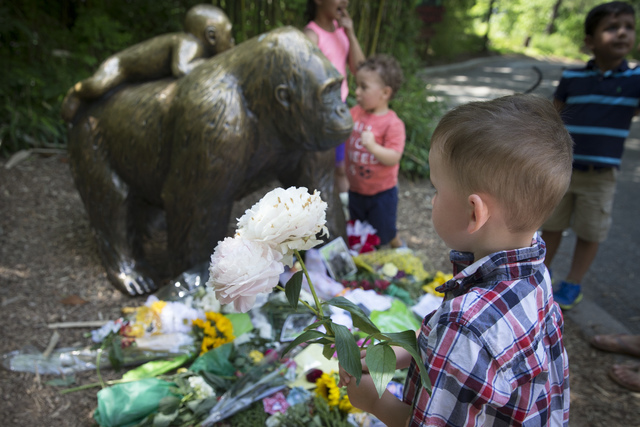 A boy brings flowers to put beside a statue of a gorilla outside the shuttered Gorilla World exhibit at the Cincinnati Zoo & Botanical Garden, Monday, May 30, 2016, in Cincinnati. (John Minchillo/AP) 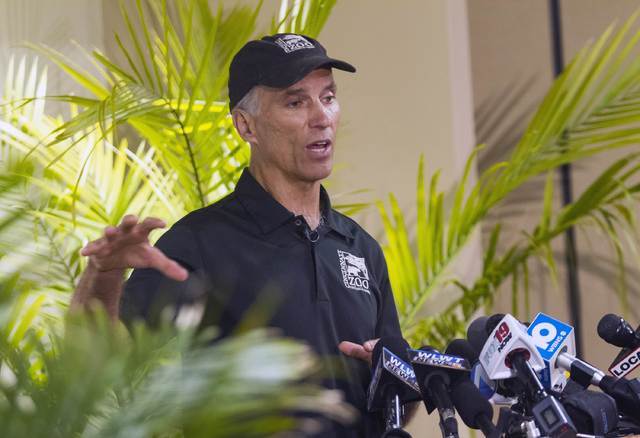 Thane Maynard, Executive Director of the Cincinnati Zoo and Botanical Gardens, speaks to reporters two days after a boy tumbled into a moat and officials were forced to kill Harambe, a Western lowland gorilla, in Cincinnati, May 30, 2016. (William Philpott/Reuters)

CINCINNATI — A prosecutor said Monday that he isn’t seeking charges against the mother of a 3-year-old boy who got into the Cincinnati Zoo’s gorilla exhibit, resulting in the shooting of an endangered gorilla to protect him.

Hamilton County Prosecutor Joe Deters said the child’s mother had three other children with her, and she was attending to them when the 3-year-old “just scampered off” on May 28. He said children’s services made a visit to the boy and mother, and social workers were impressed by the child’s environment.

Deters said the mother’s actions were “not even close” to meriting reckless endangerment charges.

Legal experts had said that prosecution on child endangerment or similar charges seems unlikely. The family has declined to comment.

The zoo plans to reopen its Gorilla World on Tuesday with a higher, reinforced barrier. The boy apparently climbed over the outer barrier before falling some 15 feet into a shallow moat. A special response team shot and killed the 17-year-old western lowland gorilla named Harambe to protect the boy.

The zoo’s role will be reviewed by the U.S. Department of Agriculture, which enforces the Animal Welfare Act. An animal protection watchdog group has urged that the zoo face federal fines.

The shooting caused a wide outpouring of criticism, blaming the boy’s parents or the zoo for the gorilla death. A Cincinnati police spokesman said last week police planned to “reach out” to the boy’s mother to advise her of threatening language in some posts.

The zoo said that there had been no earlier breaches in Gorilla World’s 38-year history and that the previous barrier had passed multiple inspections by the Association of Zoos and Aquariums, which accredits zoos. Zoo spokeswoman Michelle Curley said the outer barrier will now be 42 inches high — a half foot taller than before — with solid wood beams on top and at the bottom, plus knotted rope netting at the bottom.

A Cincinnati police report identified the boy’s mother as Michelle Gregg, 32, who works at a preschool near Cincinnati. The child’s father isn’t named in the report, and it’s not clear whether he was at the zoo that day.

The boy’s family has said he is doing well at home. Police said he had scrapes on his head and knee, but was alert and talking when rescued.

University of Dayton law professor Lori Shaw said earlier that child endangering cases are complicated and fact-specific. She said Ohio law requires that the defendant be found “reckless” and to have exposed a child to “substantial risk,” or a strong possibility of harm.

Police released 911 tapes of calls after the boy fell.

“He’s dragging my son! I can’t watch this!” a woman says in the 911 call, pleading for help. She shouts at her son repeatedly: “Be calm!”

A record of police calls shows nine minutes passed between the first emergency call about the boy falling into the enclosure and when the child was safe.

The police report states that witnesses said the gorilla initially appeared to be protecting the child, but after onlookers started screaming, it became “agitated and scared” and began dragging the child.

The boy’s family has expressed gratitude to the zoo for protecting his life.