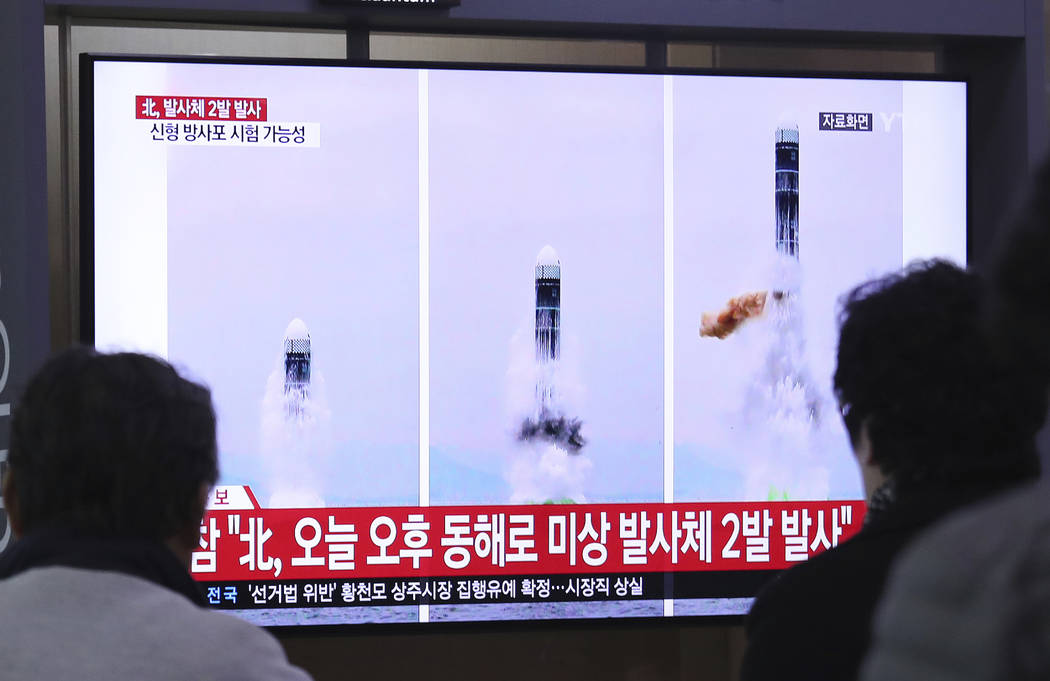 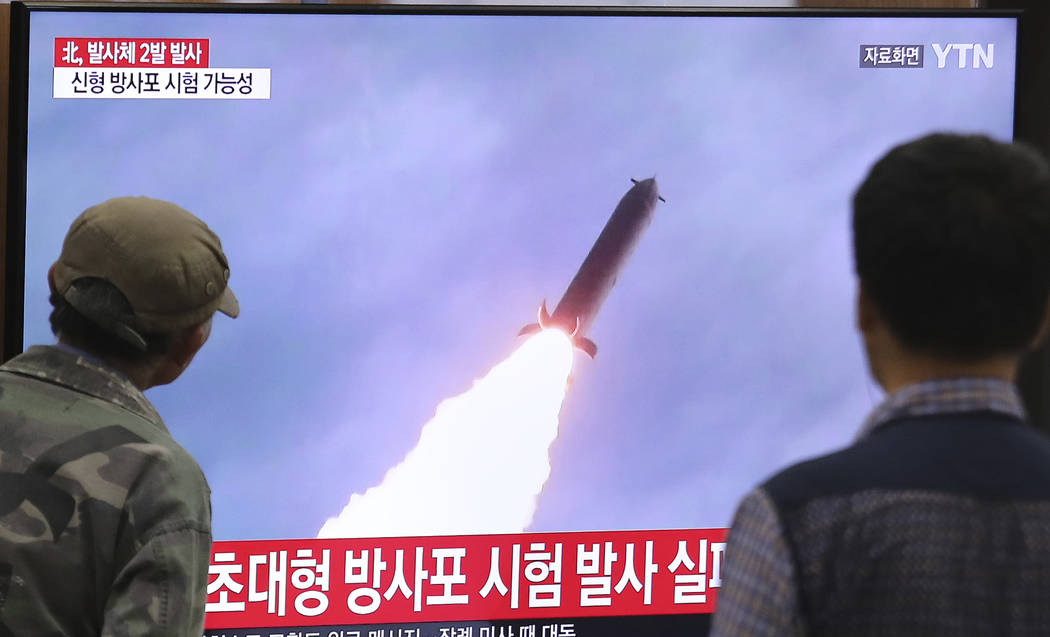 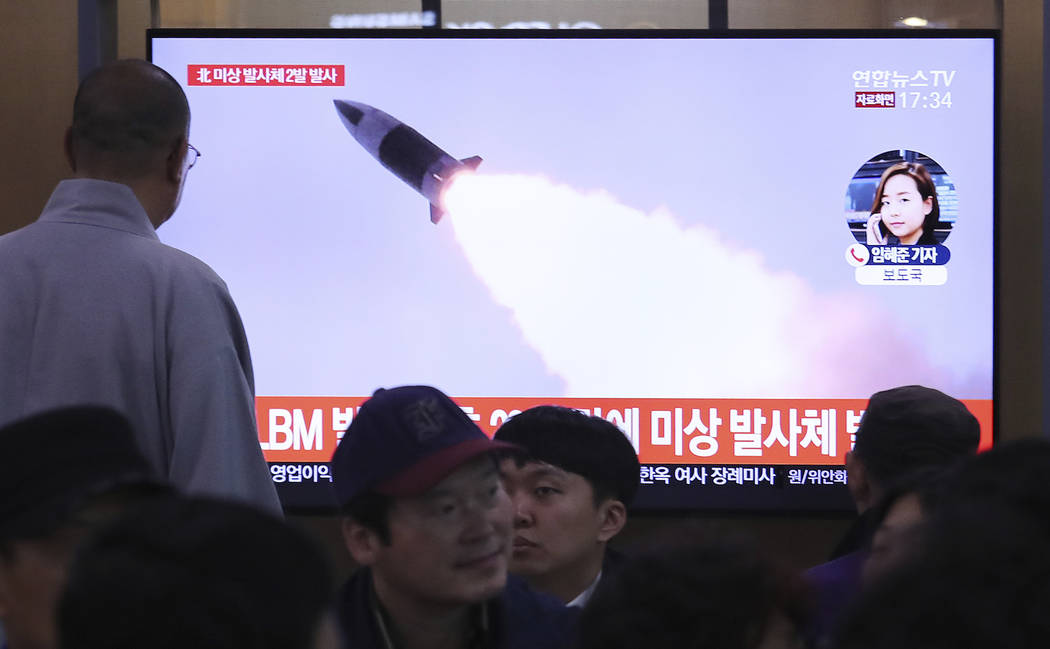 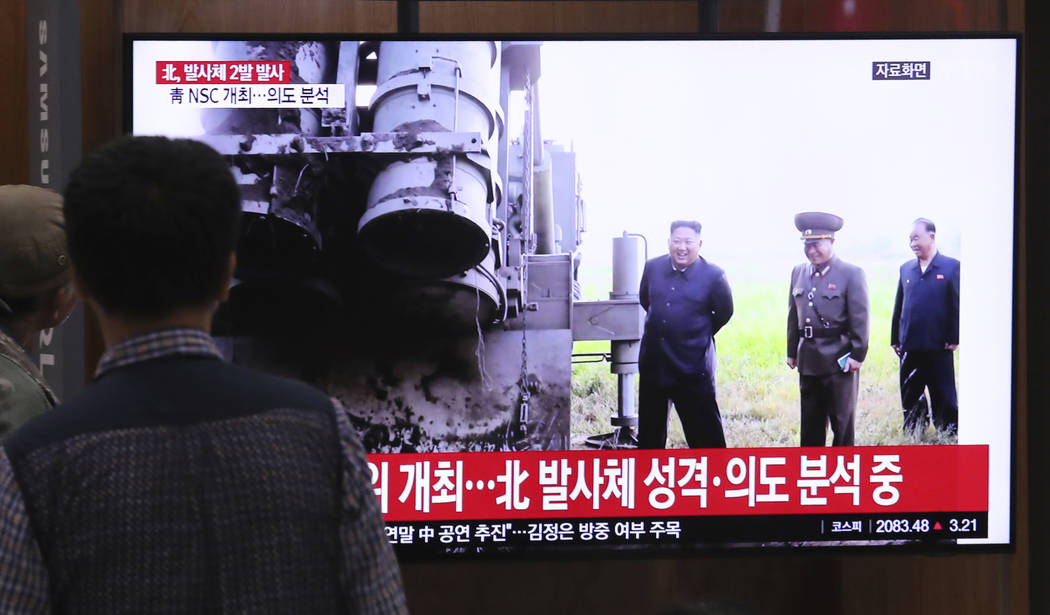 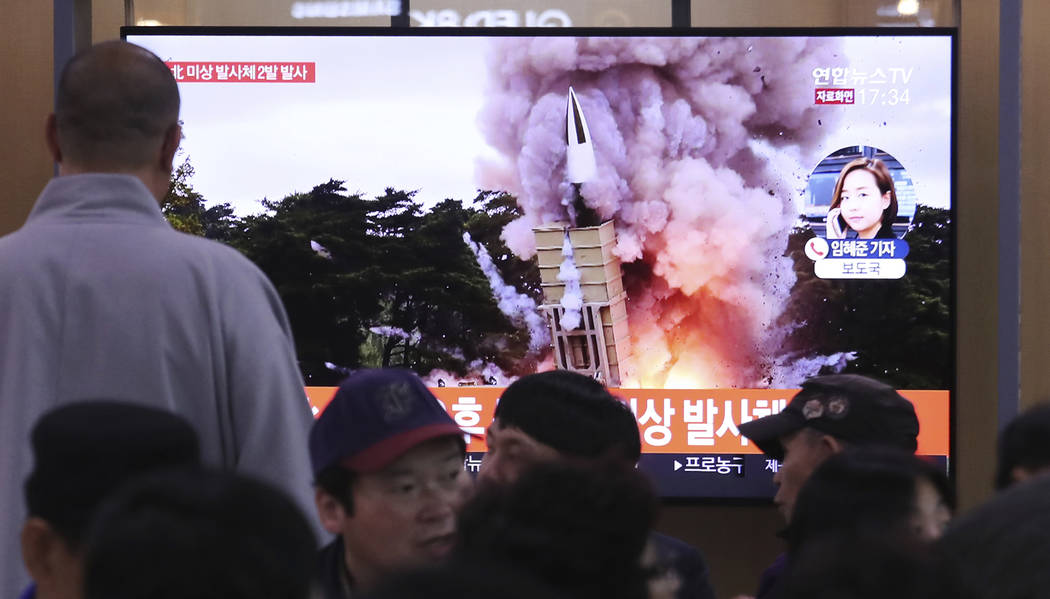 SEOUL, South Korea — North Korea on Thursday fired two projectiles into its eastern sea, an apparent resumption of weapons tests aimed at ramping up pressure on Washington over a stalemate in nuclear negotiations, according to officials in South Korea and Japan.

The launches followed statements of displeasure by top North Korean officials over the slow pace of nuclear negotiations with the United States and demands that the Trump administration ease crippling sanctions and pressure on their country.

Analysts say the North could dial up its weapons demonstrations in the coming weeks as it approaches an end-of-year deadline set by North Korean leader Kim Jong Un for Washington to offer mutually acceptable terms for a deal to salvage the nuclear diplomacy.

Seoul’s Joint Chiefs of Staff said the weapons were fired from an area near the North Korean capital of Pyongyang and flew about 370 kilometers (230 miles) across the country at a height of up to 90 kilometers (56 miles) before landing off its eastern coast. The Joint Chiefs of Staff urged the North to “immediately stop actions that do not help efforts to ease tensions on the Korean Peninsula.”

The military didn’t immediately confirm whether the weapons were ballistic missiles or rocket artillery. The office of South Korean President Moon Jae-in described them as short-range projectiles.

Japan’s Defense Ministry said it believed they were ballistic missiles, but they did not reach Japan’s territorial waters or its exclusive economic zone. Prime Minister Shinzo Abe condemned the launches “as an act that threatens the peace and safety of Japan and the region.”

Senior North Korean official Kim Yong Chol on Sunday said his country was running out of patience with the United States over what it described as unilateral disarmament demands, and warned that a close personal relationship between the leaders alone would not be enough to prevent nuclear diplomacy from derailing. He said the administration of President Donald Trump would be “seriously mistaken” if it ignores Kim Jong Un’s end-of-year deadline.

In a speech in Azerbaijan earlier this week, Choe Ryong Hae, considered the second-most powerful official in North Korea, said the deadlocked nuclear negotiations had put the Korean Peninsula at a crossroads between peace and a “touch-and-go crisis,” and demanded that the United States remove its “hostile” policy of sanctions and pressure on the North.

Nam Sung-wook, a North Korea expert at Seoul’s Korea University, said more North Korean weapons displays are likely. There’s a possibility that the North will fire some of its powerful midrange missiles over Japan, like it did during a provocative run in weapons tests in 2017, he said.

“North Korea is investing all its strength in a hard-line position against Washington and Seoul,” said Nam, a former president of the Institute for National Security Strategy, a think tank affiliated with South Korea’s main spy agency. “If its missiles fly over Japan, the international impact would be huge because the United States and Japan would find it difficult to let it go,” he said.

Earlier this month, the North test-fired an underwater-launched ballistic missile for the first time in three years. The North has also tested new short-range ballistic missile and rocket artillery systems in recent months in what experts saw as an effort to use the standstill in talks to advance its military capabilities while increasing its bargaining power.

Negotiations have faltered after the collapse of a February summit between Kim Jong Un and Trump in Hanoi, Vietnam, where the U.S. rejected North Korean demands for broad sanctions relief in exchange for piecemeal progress toward partially surrendering its nuclear capabilities.

The North responded with intensified testing activity while Kim said he would “wait with patience until the end of the year for the United States to come up with a courageous decision.”

Washington and Pyongyang resumed working-level discussion in Sweden earlier this month, but the meeting broke down amid acrimony with the North Koreans calling the talks “sickening” and accusing the Americans of maintaining an “old stance and attitude.”

After the breakdown in Sweden, North Korea released a series of photos showing Kim riding a white horse to a snow-covered Mount Paektu, a volcano considered sacred by North Koreans and a place where the leader has often visited before making key decisions. Speaking to officials near the mountain, Kim vowed to overcome U.S.-led sanctions that he said had both pained and infuriated his people.

News of the launches came after South Korea said earlier Thursday that North Korean leader Kim Jong Un sent a message of condolence to Moon over his mother’s recent death. The two leaders met three times last year and struck a set of deals aimed at easing animosities and boosting exchanges. But in recent months, North Korea has drastically reduced its engagement and diplomatic activities with South Korea, after Seoul failed to resume lucrative joint economic projects held back by U.S.-led U.N. sanctions.

“The North Korean leader does not ride a white horse to the top of Paektu mountain because he is satisfied with the status quo,” said Leif-Eric Easley, a professor at Ewha University in Seoul.

“Kim’s year-end threat is as much a deadline for economic progress as it is a diplomatic ultimatum,” Easley said. “This is why Pyongyang is increasing pressure on Seoul and Washington in the form of announcing plans to bulldoze even stalled inter-Korean projects, such as at Mount Kumgang, while continuing provocative missile tests.”