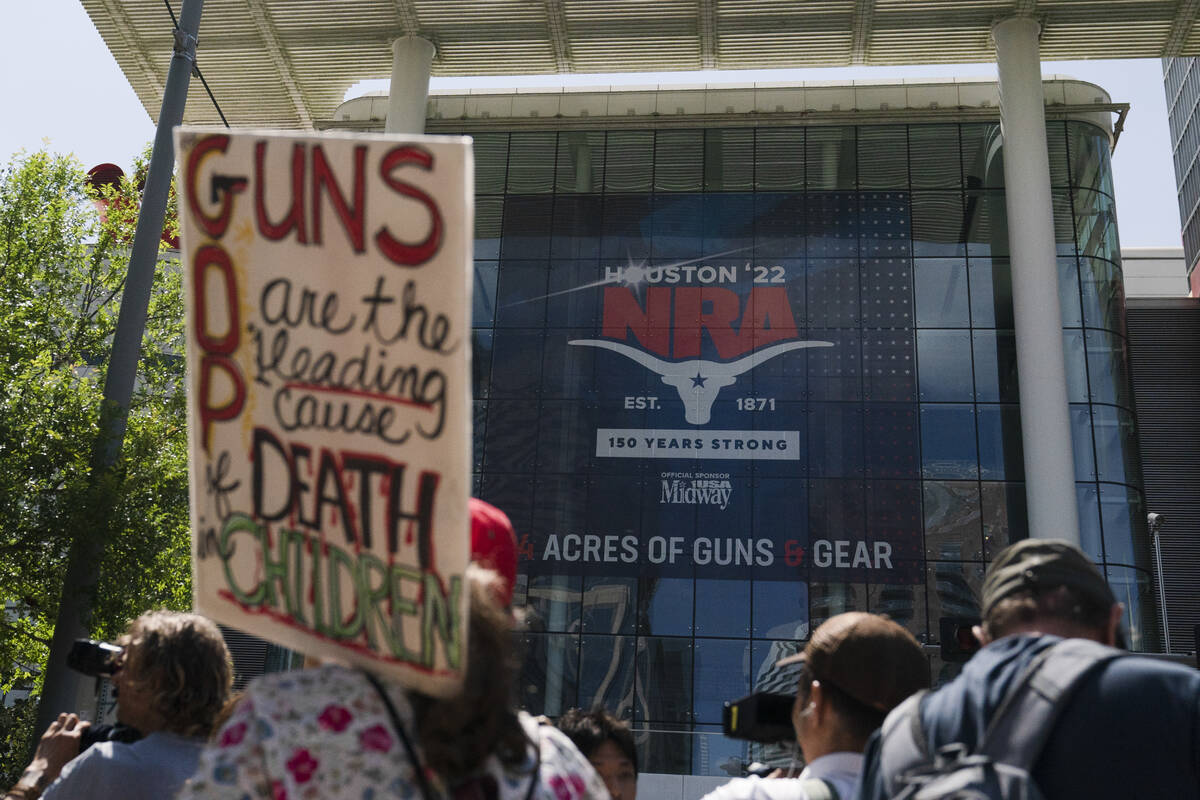 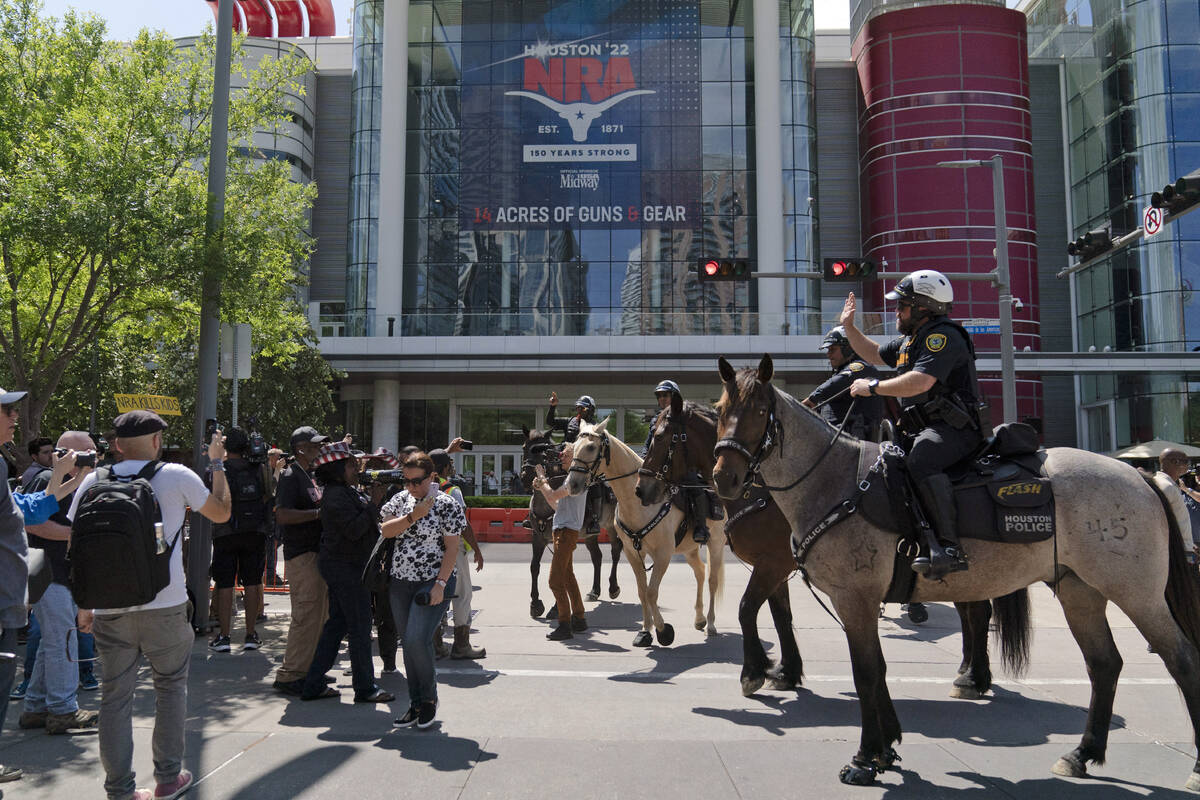 Mounted police officers tell protesters to move back across the street from the National Rifle Association annual meeting at the George R. Brown Convention Center in Houston, May 27, 2022. (AP Photo/Jae C. Hong) 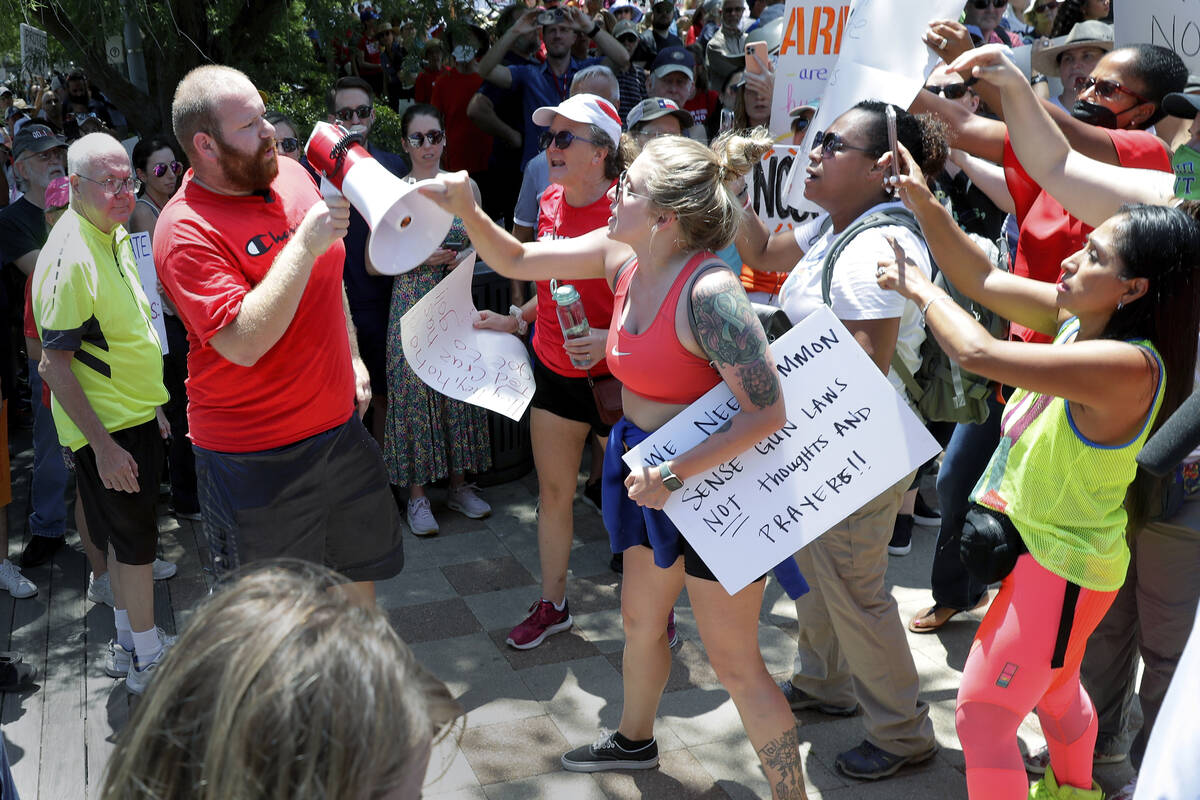 A counter-protester, left in red, is shouted down and has his megaphone taken away by rally attendees for pro-gun control efforts at Discovery Green Park, across the street from the National Rifle Association Annual Meeting at the George R. Brown Convention Center on May 27, 2022, in Houston. (AP Photo/Michael Wyke) 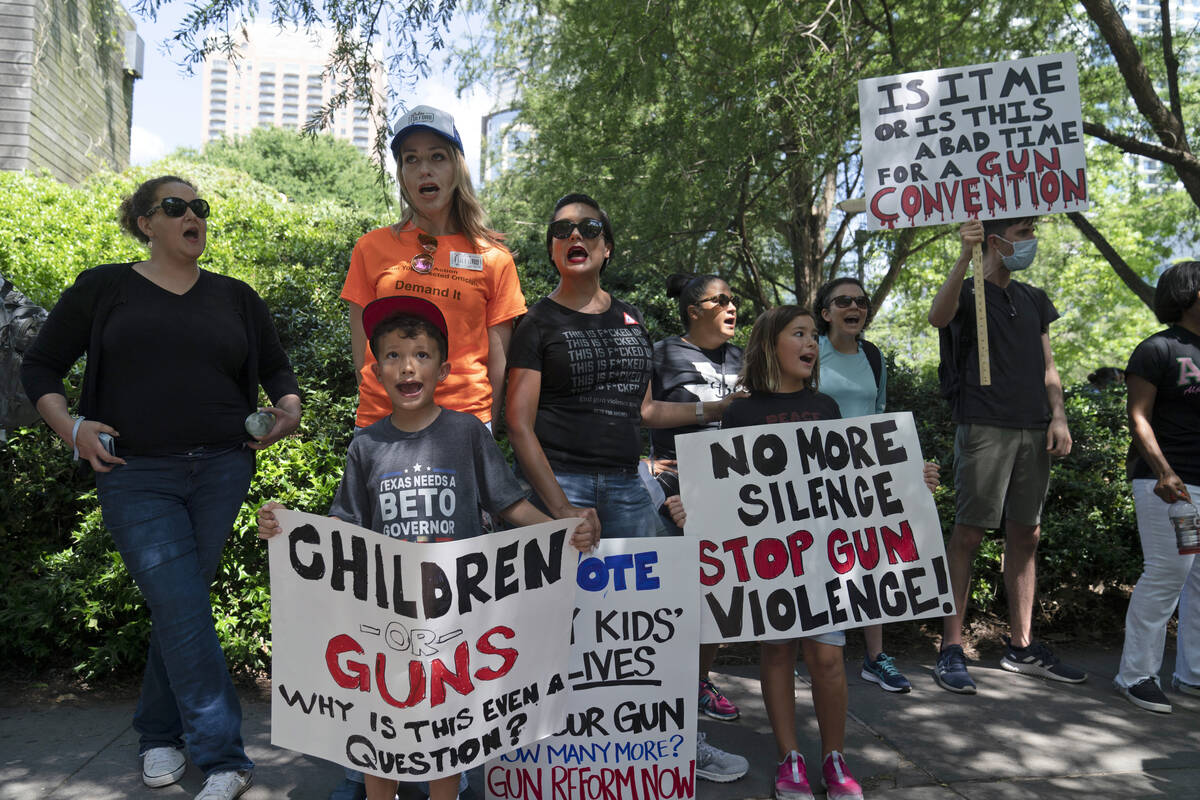 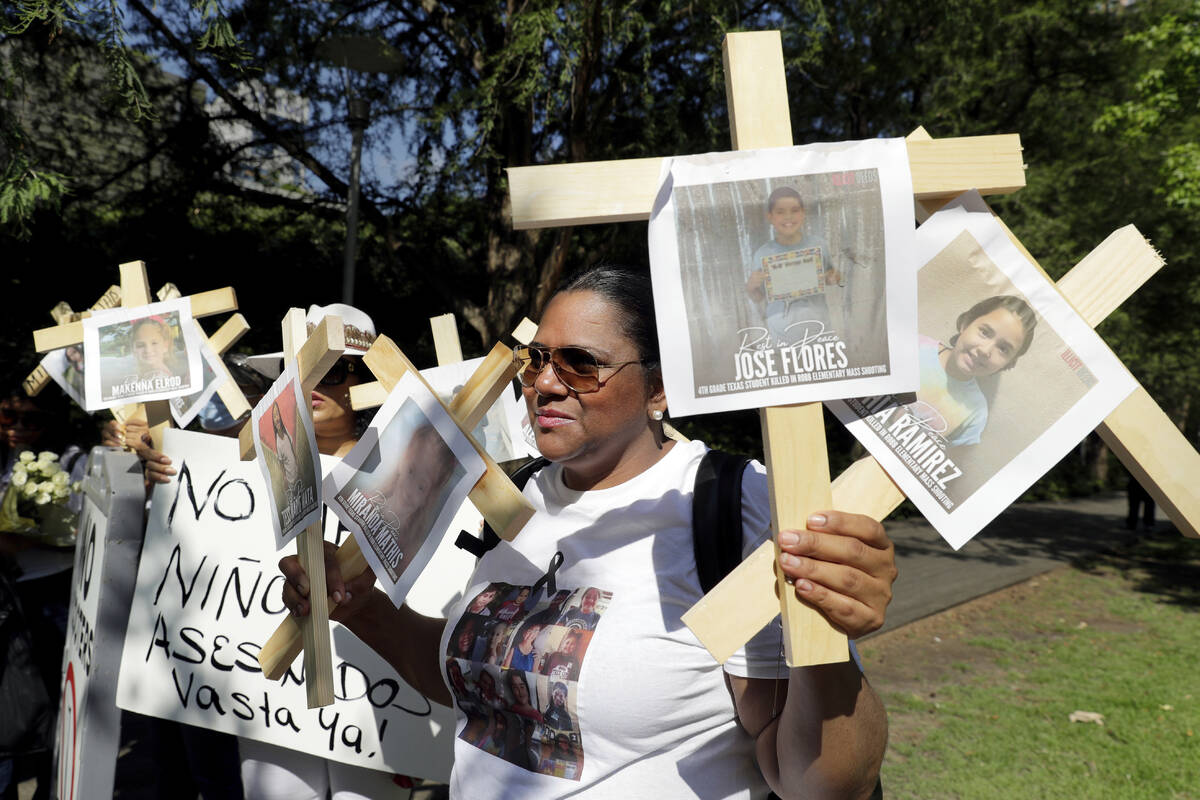 Nancy Pablo, with the Alianza Latina International, holds crosses with photos of victims of the Robb Elementary School shooting as she protests with others at Discovery Green Park across the street from the National Rifle Association Annual Meeting at the George R. Brown Convention Center on May 27, 2022, in Houston. (AP Photo/Michael Wyke)

HOUSTON — One by one, they took the stage at the National Rifle Association’s annual convention in Houston and denounced the massacre of 19 students and two teachers at an elementary school across the state. And one by one, they insisted that further restricting access to firearms was not the answer to preventing future tragedies.

“The existence of evil in our world is not a reason to disarm law-abiding citizens,” said former President Donald Trump, who was among the Republicans who lined up to speak before the gun rights lobbying group Friday as thousands of protesters angry about gun violence demonstrated outside.

“The existence of evil is one of the very best reasons to arm law-abiding citizens,” he said Friday.

The gathering came just three days after the shooting in Uvalde and as the nation grappled with revelations that students trapped inside a classroom with the gunman repeatedly called 911 during the attack — one pleading “Please send the police now” — as officers waited in the hallway for more than 45 minutes.

The meeting was the first for the troubled organization since 2019, following a two-year hiatus because of the COVID-19 pandemic. The organization has been trying to regroup following a period of serious legal and financial turmoil that included a failed bankruptcy effort, a class-action lawsuit and a fraud investigation by New York’s attorney general. Once among the most powerful political organizations in the country, the NRA has seen its influence wane following a significant drop in political spending.

Restricting rights ‘is not the answer’

Still, he said that “restricting the fundamental human rights of law-abiding Americans to defend themselves is not the answer. It never has been.”

Later, several hundred people in the auditorium stood and bowed their heads in a moment of silence for the victims of the shooting. Several thousand people were inside the auditorium during the speeches, which appeared fewer than the number gathered outside. Many seats were empty.

Trump accused Democrats of trying to exploit the tragedy and demonizing gun owners.

“When Joe Biden blamed the gun lobby he was talking about Americans like you,” Trump said, referring to the president’s emotional plea in a national address asking, “When in God’s name are we going to stand up to the gun lobby?”

Trump called for overhauling school security and the nation’s approach to mental health, telling the group every school building should have a single point of entry, strong exterior fencing, metal detectors and hardened classroom doors and every school should have a police officer or armed guard on duty at all times. He also called yet again for trained teachers to be able to carry concealed weapons in the classroom.

He and other speakers overlooked the security upgrades that were already in place at the elementary school and did not stop the gunman, who entered the building through a back door that had been propped open.

According to a district safety plan, Uvalde schools have a wide range of safety measures in place. The district had four police officers and four support counselors, according to the plan, which appears to be dated from the 2019-20 school year. It also had software to monitor social media for threats and software to screen school visitors.

Security experts say the Uvalde case illustrates how fortifying schools can backfire. A lock on the classroom door, for instance — one of the most basic and widely recommended school safety measures — kept victims in and police out.

Texas Sen. Ted Cruz, who, like Trump, is considered a potential presidential candidate in 2024, railed against Democrats’ calls for universal background checks for gun purchases and bans of assault-style weapons and instead pointed to broken families, declining church attendance, social media bullying and video games as the real problems.

“Tragedies like the event of this week are a mirror forcing us to ask hard questions, demanding that we see where our culture is failing,” he said. “We must not react to evil and tragedy by abandoning the Constitution or infringing on the rights of our law-abiding citizens.”

South Dakota Gov. Kristi Noem, another potential presidential contender, said calls to further restrict gun access are “all about control and it is garbage. I’m not buying it for a second and you shouldn’t, either.”

Some scheduled speakers and performers backed out of the event, including several Texas lawmakers and “American Pie” singer Don McLean, who said “it would be disrespectful” to go ahead with his act after the country’s latest mass shooting. Texas Lt. Gov. Dan Patrick said Friday morning that he had decided not to speak at an event breakfast after “prayerful consideration and discussion with NRA officials.”

“While a strong supporter of the Second Amendment and an NRA member, I would not want my appearance today to bring any additional pain or grief to the families and all those suffering in Uvalde,” he wrote in a statement.

Texas Gov. Greg Abbott, who was to attend, addressed the convention by prerecorded video instead.

Outside the convention hall, protesters gathered in a park where police set up metal barriers — some holding crosses with photos of the Uvalde shooting victims.

“Murderers!” some yelled in Spanish. “Shame on you!” others shouted at attendees.

Only in the USA

Among the protesters was singer Little Joe, of the popular Tejano band Little Joe y La Familia, who said in the more than 60 years he’s spent touring the world, no other country he’s been to has faced as many mass shootings as the U.S.

“Of course, this is the best country in the world,” he said. “But what good does it do us if we can’t protect lives, especially of our children?”

Democrat Beto O’Rourke, who is challenging Abbott in the governor’s race, ticked off a list of previous school shootings and called on those attending the convention to “join us to make sure that this no longer happens in this country.”

While Biden and Democrats in Congress have renewed calls for stricter gun laws after the Uvalde shooting, NRA board members and others attending the conference dismissed talk of banning or limiting access to firearms.

Samuel Thornburg, 43, a maintenance worker for Southwest Airlines in Houston who was attending the NRA meeting, said: “Guns are not evil. It’s the people that are committing the crime that are evil. Our schools need to be more locked. There need to be more guards.”

There is precedent for the NRA to gather during local mourning and controversy. The organization went ahead with a shortened version of its 1999 meeting in Denver roughly a week after the deadly shooting at Columbine High School in Colorado.

Texas has experienced a series of mass shootings in recent years. During that time, the Republican-led Legislature and governor have relaxed gun laws.

Most U.S. adults think that mass shootings would occur less often if guns were harder to get and believe schools and other public places have become less safe than they were two decades ago, polling finds.

Many specific measures that would curb access to guns or ammunition also get majority support. A May AP-NORC poll found, for instance, that 51% of U.S. adults favor a nationwide ban on the sale of AR-15 rifles and similar semiautomatic weapons. But the numbers are highly partisan, with 75% percent of Democrats agreeing versus just 27% of Republicans.

Though personal firearms are allowed at the convention, guns were not permitted during the session featuring Trump because of Secret Service security protocols.