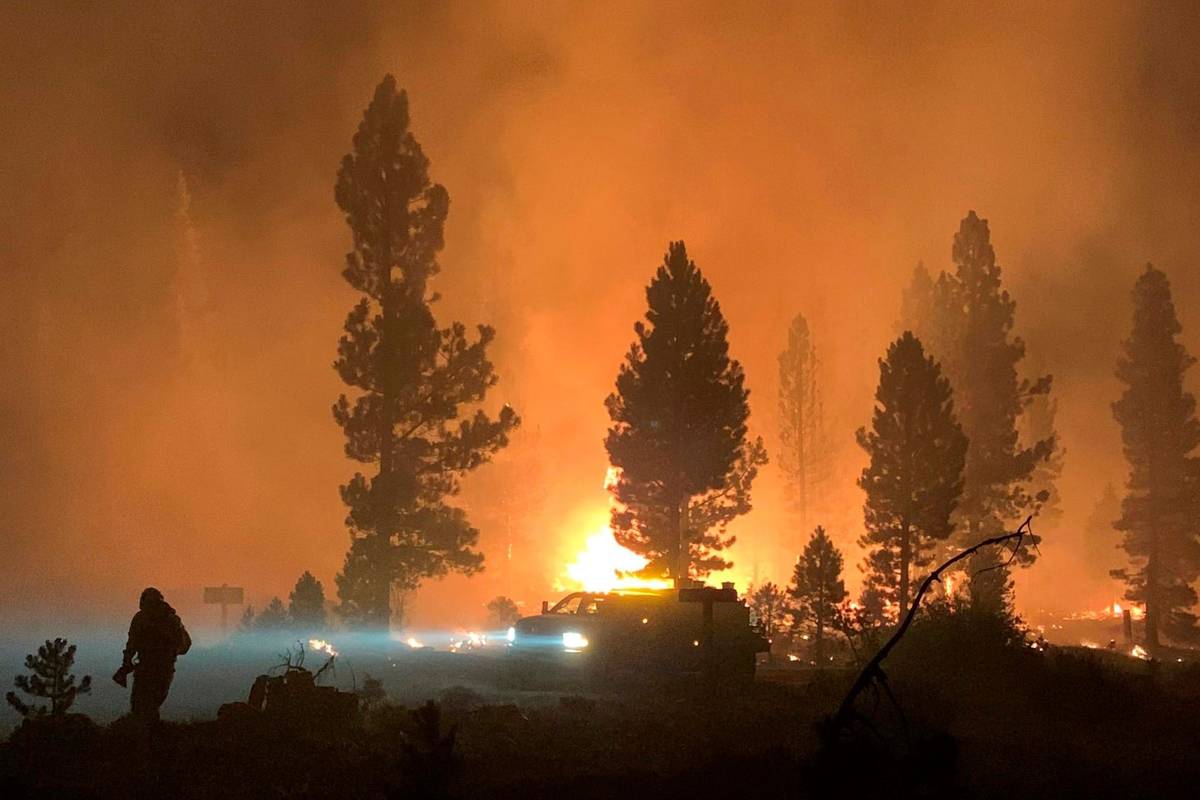 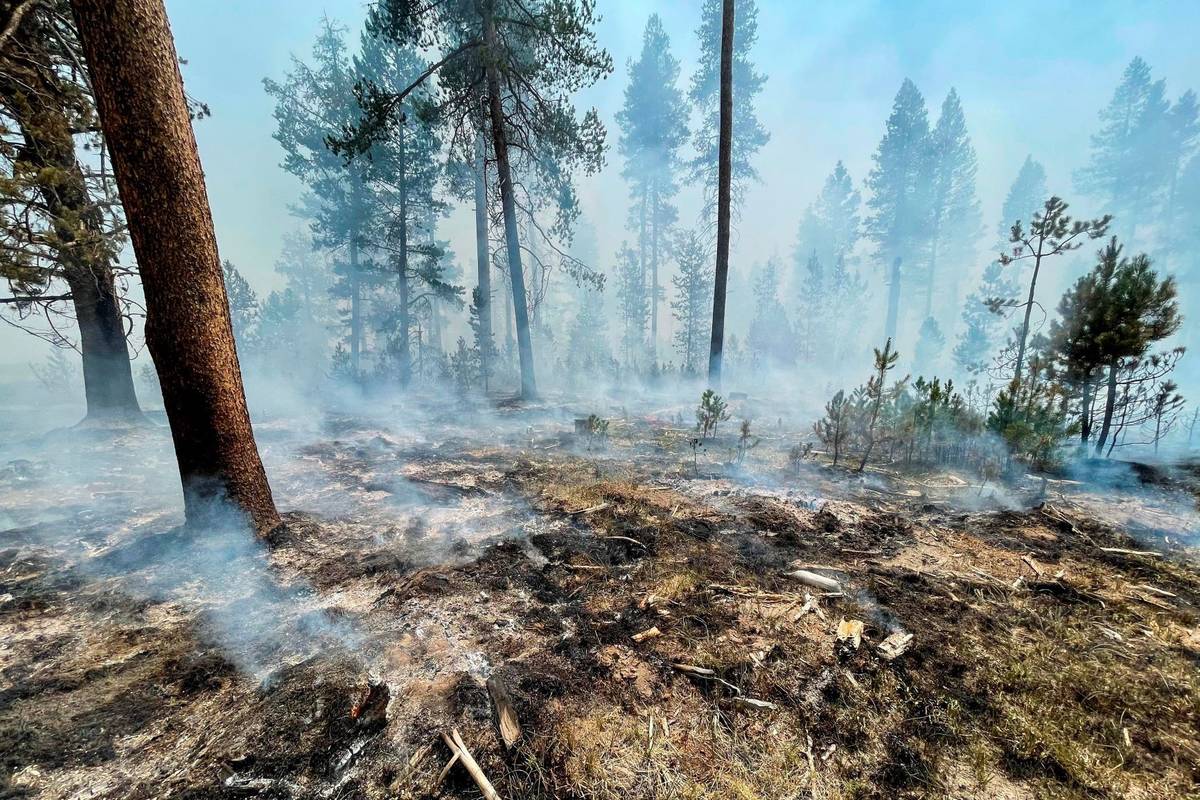 PORTLAND, Ore. — The monstrous wildfire burning in Oregon has grown to a third the size of Rhode Island and spreads miles each day, but evacuations and property losses have been minimal compared with much smaller blazes in densely populated areas of California.

The fire’s jaw-dropping size contrasted with its relatively small impact on people underscores the vastness of the American West and offers a reminder that Oregon, which is larger than Britain, is still a largely rural state, despite being known mostly for its largest city, Portland.

The 476-square-mile Bootleg Fire is burning 300 miles southeast of Portland in and around the Fremont-Winema National Forest, a vast expanse of old-growth forest, lakes and wildfire refuges.

If the fire were in densely populated parts of California, “it would have destroyed thousands of homes by now,” said James Johnston, a researcher with Oregon State University’s College of Forestry who studies historical wildfires. “But it is burning in one of the more remote areas of the lower 48 states. It’s not the Bay Area out there.”

At least 2,000 homes have been evacuated at some point during the fire and another 5,000 threatened. At least 70 homes and more than 100 outbuildings have gone up in flames. Thick smoke chokes the area where residents and wildlife alike have already been dealing with months of drought and extreme heat. No one has died.

Pushed by strong winds from the southwest, the fire is spreading rapidly to the north and east, advancing toward an area that’s increasingly remote.

Evacuation orders on the fire’s southern edge, closer to more populous areas like Klamath Falls and Bly, have been lifted or relaxed as crews gain control. Now it’s small, unincorporated communities like Paisley and Long Creek — both with fewer than 250 people — and scattered homesteads that are in the crosshairs.

“The Bootleg Fire is threatening ranch houses that are in pretty far-flung areas,” Johnston said. “There are no suburbs in that area.”

But as big as the Bootleg Fire is, it’s not the biggest Oregon has seen. The fire’s current size puts it fourth on the list of the state’s largest blazes in modern times, including rangeland fires, and second on the list of infernos specifically burning in forest.

These megafires usually burn until the late fall or even early winter, when rain finally puts them out.

The largest forest fire in modern history was the Biscuit Fire, which torched nearly 780 square miles (2,000 square kilometers) in 2002 in the Rogue River–Siskiyou National Forest in southern Oregon and northern California. The largest fire of any type was the Long Draw Fire in 2012, which incinerated 872 square miles (2,260 square kilometers) of mostly sagebrush and rangeland in the endless expanses of southeastern Oregon, where almost no one lives.

By the time the Bootleg Fire is extinguished months from now, it will likely be as big or bigger than those fires, but research shows that Oregon once experienced megafires much larger than these fairly often, Johnston said.

“I think it’s important for us to take the long view of wildfire. In the context of the last couple hundreds years, the Bootleg Fire is not large,” he said. “One of the things my lab group does is reconstruct historical fires, and fires that were burning in that area in the 1600s and 1700s were just as big as the Bootleg Fire or bigger.”

That’s little reassurance for fire crews battling the current blaze, which is 25% contained.

On Monday, flames forced the evacuation of a wildlife research station as firefighters had to retreat from the flames for the ninth consecutive day due to erratic and dangerous fire behavior. Sycan Marsh hosts thousands of migrating and nesting birds and is a key research station on wetland restoration in the upper reaches of the Klamath Basin.

Fire pushed by winds and fueled by bone-dry conditions jumped fire-retardant containment lines and pushed up to 4 miles into new territory, authorities said.

Fire crews were also rushing to corral multiple “slop fires” — patches of flames that escaped fire lines meant to contain the blaze — before they grew in size. One of those smaller fires was already nearly 4 square miles in size. Thunderstorms with dry lightning were possible Monday as well, heightening the dangers.

“We are running firefighting operations through the day and all through the night,” said Joe Hessel, incident commander. “This fire is a real challenge, and we are looking at sustained battle for the foreseeable future.”

The Bootleg Fire was one of many fires burning in a dozen states, most of them in the U.S. West.

Extremely dry conditions and heat waves tied to climate change have made wildfires harder to fight. Climate change has made the West much warmer and drier in the past 30 years and will continue to make weather more extreme and wildfires more frequent and destructive.

At the other end of Oregon, a fire in the northeast mountains grew to nearly 26 square miles.

The Elbow Creek Fire that started Thursday has prompted evacuations in several small, rural communities around the Grande Ronde River about 30 miles southeast of Walla Walla, Washington. It was 10% contained.

Natural features of the area act like a funnel for wind, feeding the flames and making them unpredictable, officials said.

A complex of fires where the states of Oregon, Washington and Idaho meet also grew, reaching 167 square miles. The Snake River Complex was 44% contained. The complex was made up of three fires started by lightning on July 7. Flames were chewing through a mix of grass and timber in an extremely remote area of steep terrain about 20 miles south of Lewiston, Idaho.

Thunderstorms expected to roll through Monday night could bring winds to fan the flames and lightning that could spark new ones, the National Weather Service said. 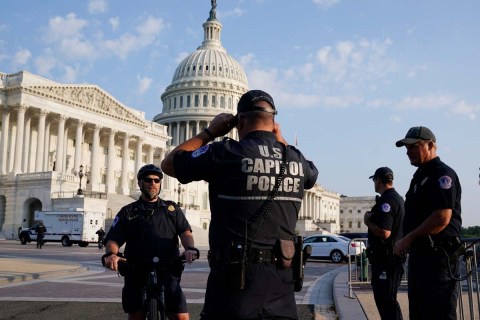 A committee investigating the Jan. 6 Capitol insurrection opened its first hearing Tuesday with a focus on the law enforcement officers who were attacked and beaten.