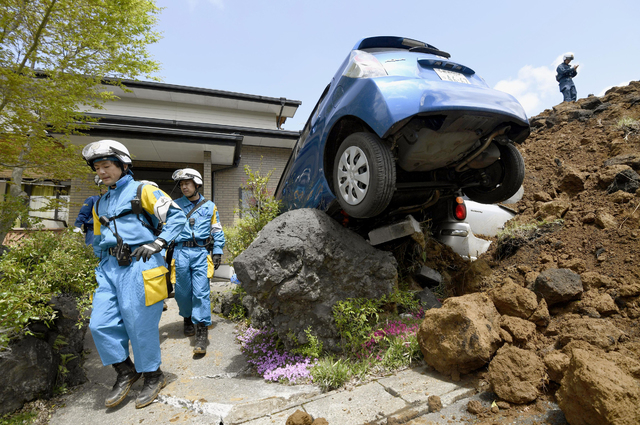 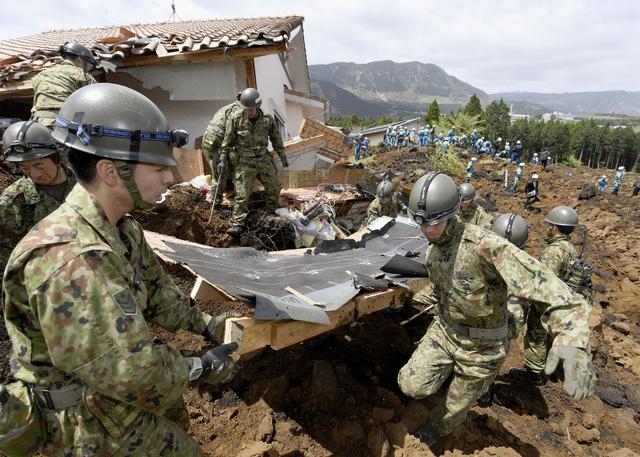 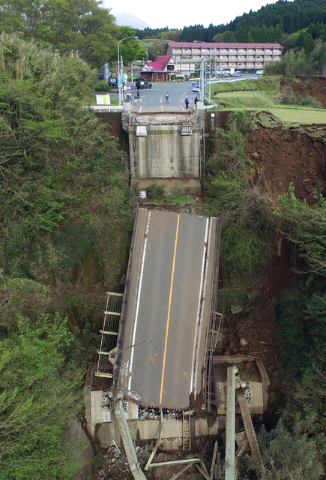 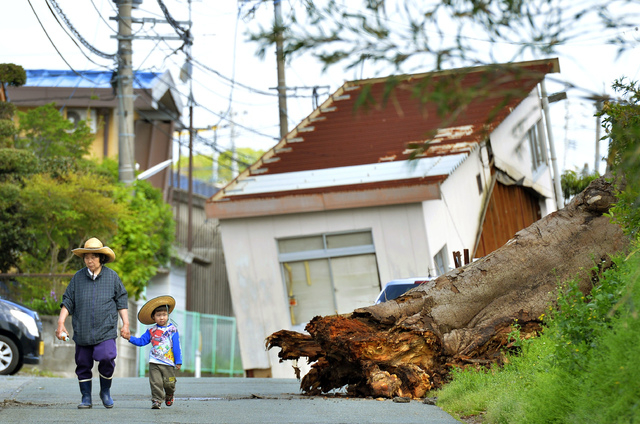 People walk near a fallen tree and house damaged by an earthquake in Mashiki, Kumamoto prefecture, Japan Sunday, April 17, 2016. After two nights of earthquakes, flattened houses and triggered major landslides in southern Japan, 91,000 people had evacuated from their homes, according to a Kumamoto prefectural official. (Ryosuke Ozawa/Kyodo News via AP) 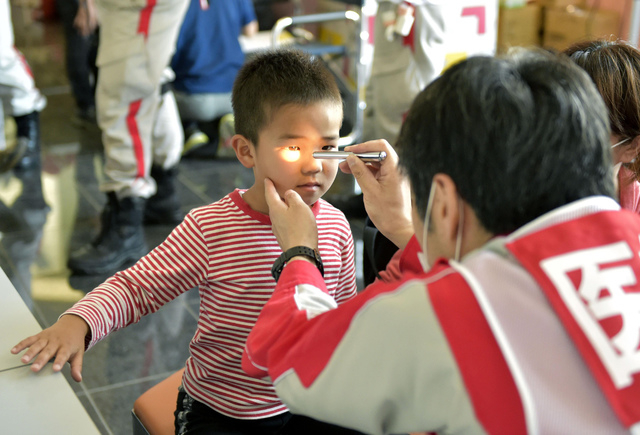 A boy receives medical checkup at a shelter in Mashiki, Kumamoto prefecture, Japan Sunday, April 17, 2016. After two nights of earthquakes, flattened houses and triggered major landslides in southern Japan, 91,000 people had evacuated from their homes, according to a Kumamoto prefectural official. (Yohei Nishimura/Kyodo News via AP)

MINAMIASO, Japan — Eleven people remained missing Sunday in southern Japan from two powerful earthquakes that killed 41 people, as the U.S military announced it was preparing to join relief efforts and Toyota said it would suspend nearly all of its vehicle production in Japan.

Thousands of rescue workers fanned out in often mountainous terrain to search for the missing. Rescue helicopters could be seen going into and out of the area, much of which has been cut off by landslides and road and bridge damage.

With 180,000 people seeking shelter, some evacuees said that food distribution was a meager two rice balls for dinner.

U.S. Forces, Japan said it was getting ready to provide aerial support for Japan’s relief efforts. The U.S. has major Air Force, Navy and Marine bases in Japan, and stations about 50,000 troops in the country.

Japanese Prime Minister Shinzo Abe said, “We are extremely grateful, and we would like to coordinate quickly and have the emergency relief be transported in as soon as possible.”

Shiori Yatabe, an official at the Kumamoto prefecture crisis management department, said 11 people were missing. She didn’t have a breakdown, but Japanese media reported that eight were in Minamiaso village.

About 100 troops, police and other rescue workers searched for those missing in Minamiaso, shoveling dirt in areas where they were believed to have been buried. A few stretchers were on hand in case anyone was found alive.

Earthquakes on successive nights struck Kumamoto city and the surrounding region late last week. Nine people died in the first earthquake, and 32 in the second. Kumamoto, a city of 740,000, is on the southwestern island of Kyushu.

The hardest-hit town appears to be Mashiki, on the eastern border of Kumamoto city, where 20 people died.

Overnight rainfall did not appear to cause any more landslides, as had been feared, and the skies had cleared by Sunday morning.

About 80,000 homes in Kumamoto prefecture still didn’t have electricity Sunday, the Ministry of Economy, Trade and Industry said. Japanese media reported earlier that an estimated 400,000 households were without running water.

More than 1,000 buildings were damaged in the two earthquakes, including at least 90 that were destroyed.

Many residents were still recovering from the shock of the destruction, while struggling to bring their lives, and spirit, together.

“Without water and electricity, we can’t do anything. Without the TV on, we can’t even get information about disaster relief operations,” said Megumi Kudo, 51, standing in a line for water outside a community center in Aso city. “We can’t take a bath, not even a shower.”

Kudo came with his wife and a 12-year-old daughter, carrying several empty gallon-size plastic containers to get water while his 80-year-old mother waited at home. “It’s better to be prepared than sorry, as we learned the hard way,” he said.

His house survived, despite major roof damage, but like many, the family is sleeping in their cars outside.

A few blocks away, 75-year-old Tokio Miyamoto said he’s too afraid to sleep alone in his house, so he lugs his futon bedding every evening to an evacuation center. “It’s a hassle, but it’s too scary to be alone,” he said.

Miyamoto said there was not sufficient food at the evacuation center, only a couple of rice balls each time.

Toyota Motor Corp. said it would shut down most of its vehicle production in Japan over the course of this week because of parts shortages stemming from the earthquakes.

The shutdown will begin Monday at a factory in Kyushu and progress to other plants in Japan through Friday. Toyota said on its website Sunday that resumption of operations would depend on the availability of parts.

Other companies, including Sony, have announced stoppages of some of their factories in Kyushu.