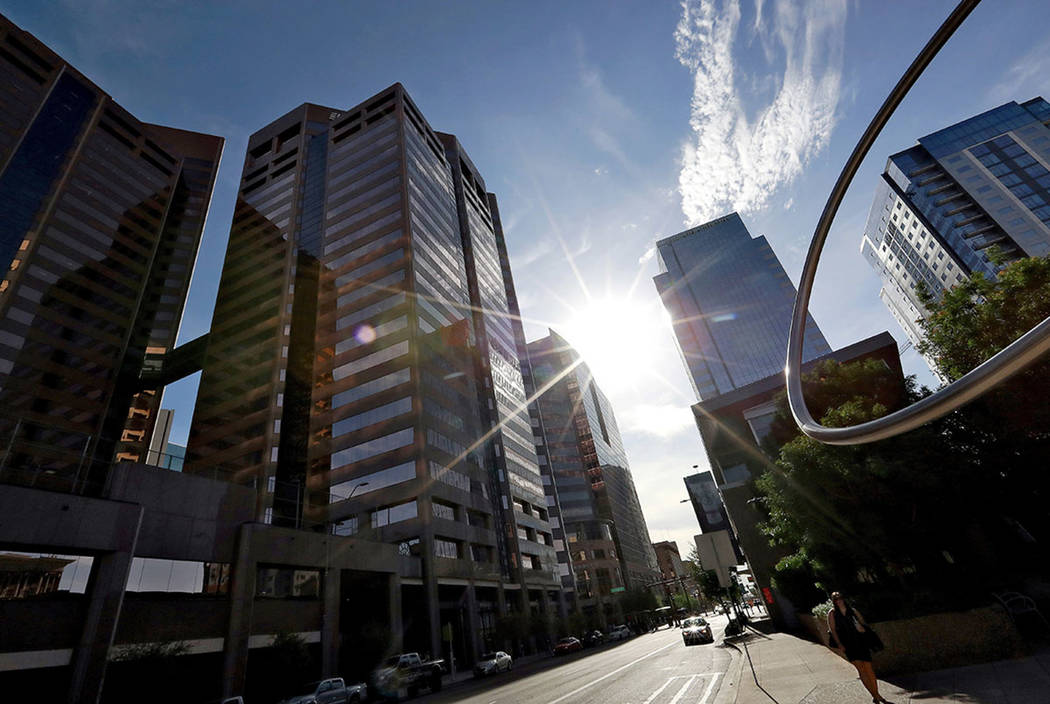 In this Monday, July 23, 2018 photo, the sun beats down on downtown Phoenix. (AP Photo/Matt York) 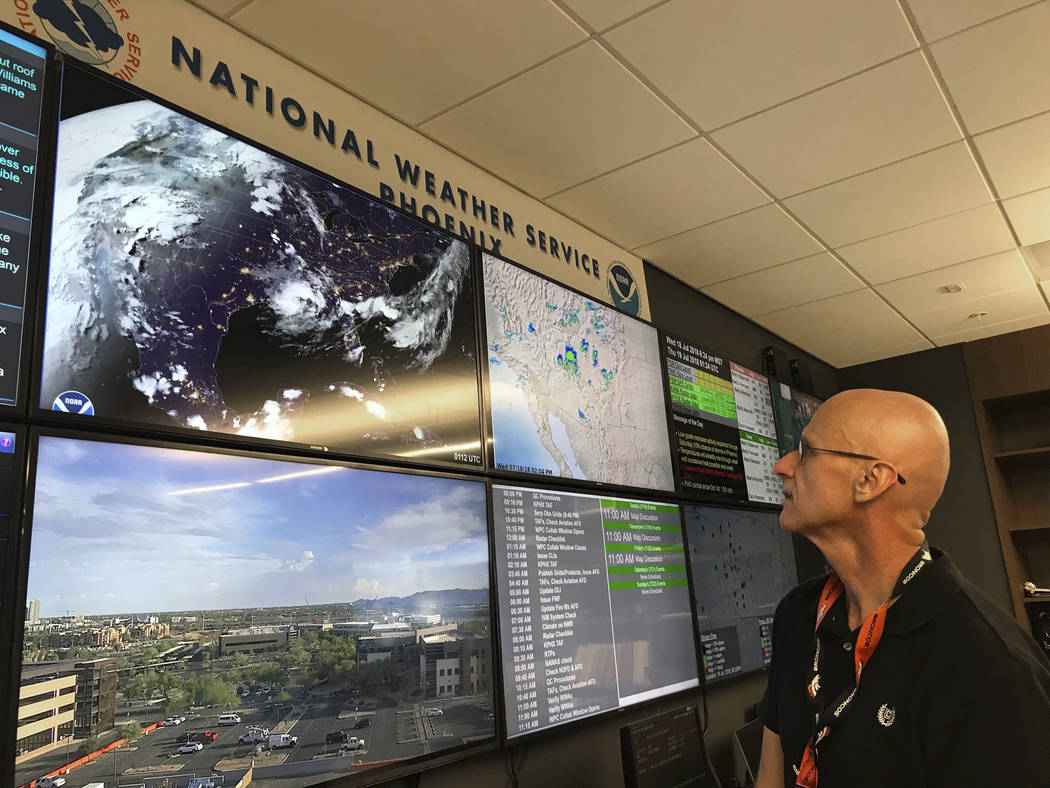 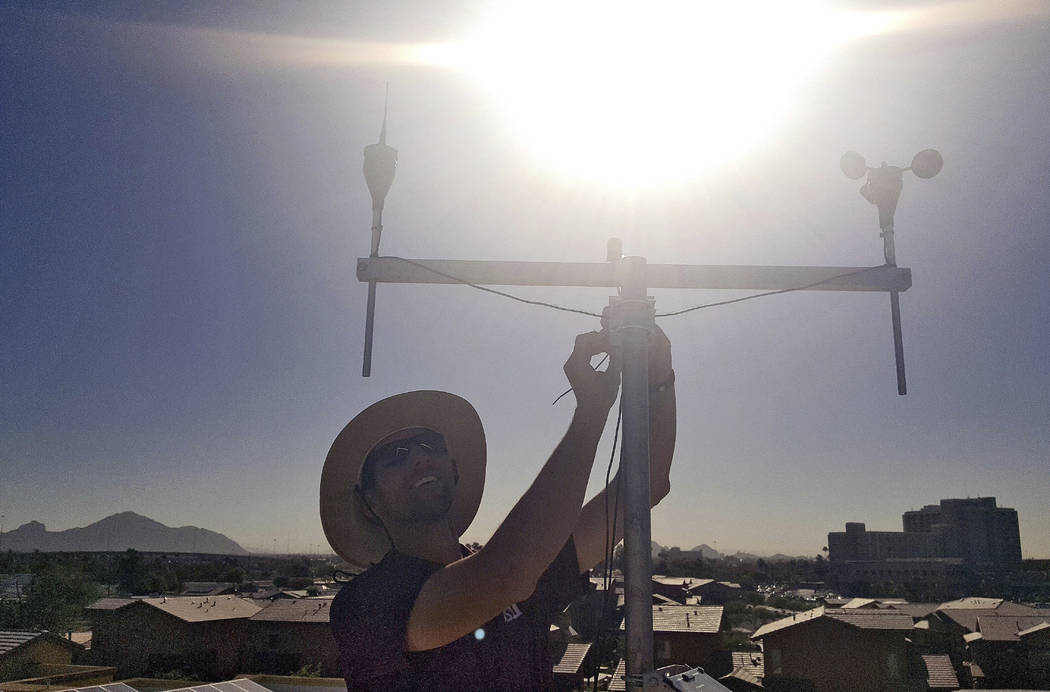 In this July 20, 2018 photo, David Hondula, Assistant Professor in the School of Geographical Sciences and Urban Planning at Arizona State University and a faculty affiliate of the Urban Climate Research Center, works on a weather station installation in the Aeroterra Apartment community in Phoenix. (David Sailor/Edison-Eastlake Measurement Campaign via AP) 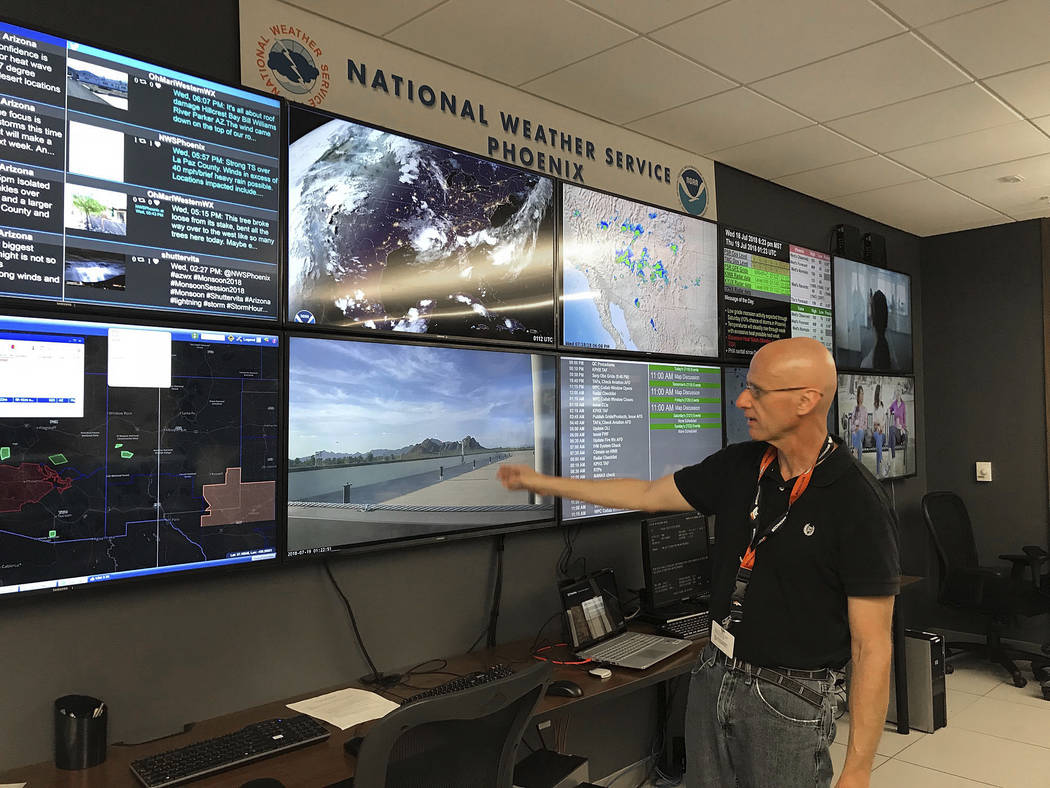 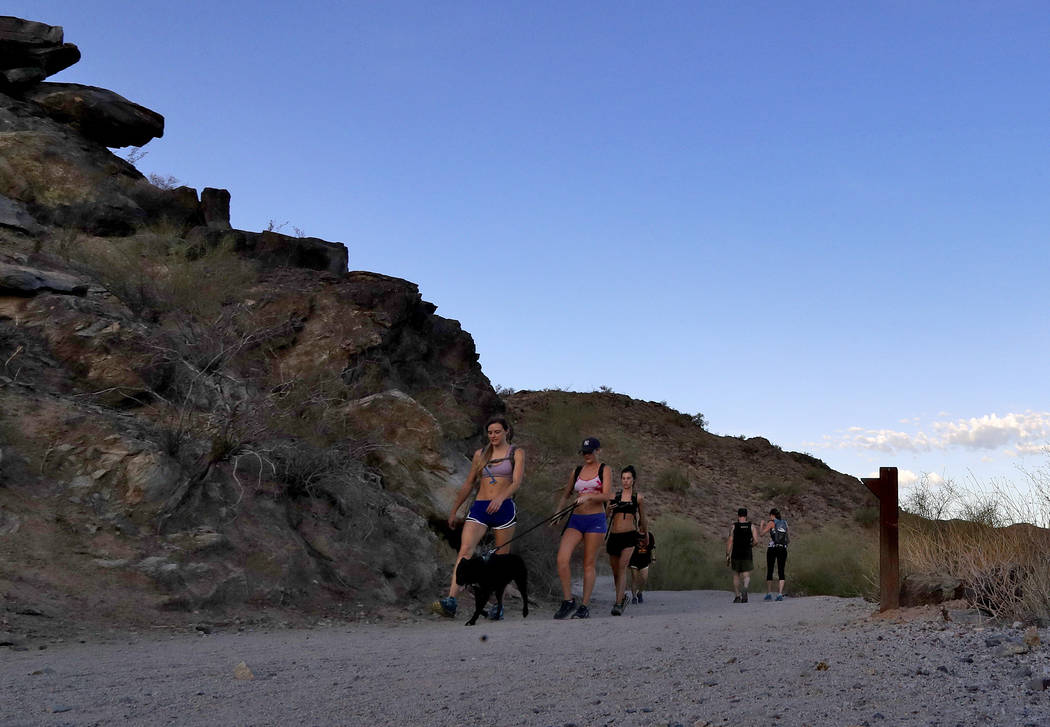 In this Tuesday, July 24, 2018 photo, hikers beat the heat on the trails at first light in Phoenix as temperatures exceed 95 degrees before sunrise. (AP Photo/Matt York) 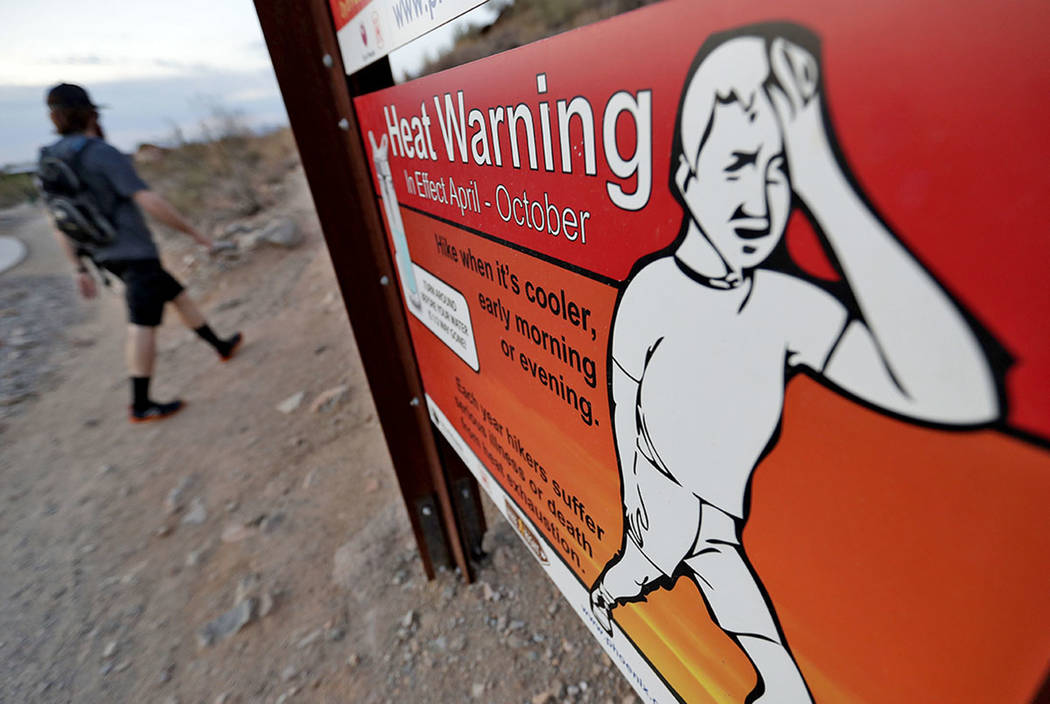 In this Tuesday, July 24, 2018 photo, a hiker walks past a heat warning sign at sunrise, in Phoenix. (AP Photo/Matt York) 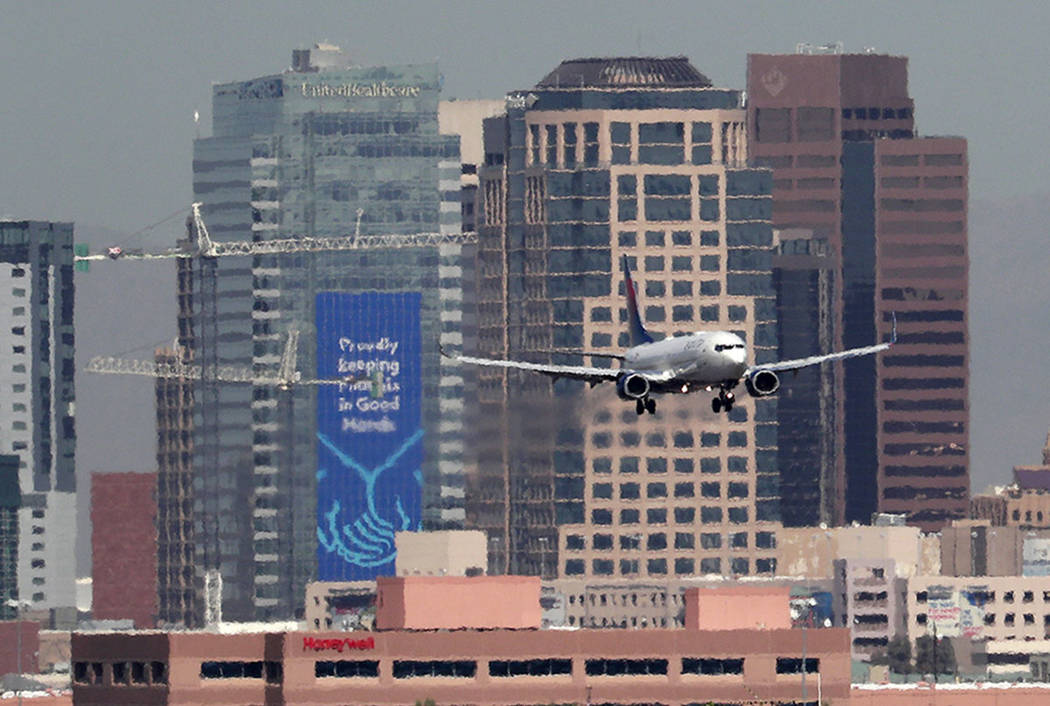 In this Monday, July 23, 2018 photo, heat ripples blur the downtown skyline as a jet lands in Phoenix, Ariz., as temperatures exceed 100 degrees in the morning hours. (AP Photo/Matt York)

PHOENIX — When temperatures soar as they have this week in downtown Phoenix, homeless people ride the air-conditioned light rail to avoid a heat so brutal it killed 155 people in the city and surrounding areas last year. An occasional siren wails as paramedics rush to help people sick from the heat.

Already devilishly hot for being in the Sonoran desert, Arizona’s largest city is also an “urban heat island,” a phenomenon that pushes up temperatures in areas covered in heat-retaining asphalt and concrete. Forecasters said the high for Phoenix had risen to 111 degrees by midafternoon Thursday and was not expected to hit Wednesday’s record high for the day of 116.

Elsewhere, Chicago maintains more than 500,000 trees to offset rising temperatures and is a national leader among cities for so-called green roofs covered with vegetation. Los Angeles adopted an ordinance in 2014 to require reflective “cool roofs” for new homes including rentals, while Seattle is working to restore the city’s forested parklands.

But climate specialists like Brian Stone, who runs the Georgia Institute of Technology’s Urban Climate Lab, said more is needed.

In urban heat islands, solar radiation and hot air from vehicles and buildings get trapped between high-rises. There aren’t enough trees to provide shade and evaporative cooling that can bring down temperatures.

“We are working against a pronounced warming trend in large cities, and so it will require a substantial resurfacing of urban environments simply to slow the rate of warming,” Stone said.

He said the heat island effect prevents a city from peeling off the day’s furnace-like heat after the sun sets, driving up temperatures over time. His team’s research shows Phoenix temperatures rising nearly 1 degree per decade, consistently placing it alongside Dallas and Louisville, Kentucky, as some of the fastest-warming U.S. cities. He said Phoenix is warming at three times the rate of the planet as a whole.

Stone noted the heat island effect is caused by local land use and energy decisions and is separate from global warming, but said the two often work together.

While the heat increases energy consumption and air pollution, authorities in Phoenix, the hottest of the three cities, worry most about health problems like heat stroke or heat exhaustion. So far this year, five people have died in Maricopa County from heat-associated causes, and another 34 cases are being investigated, public health officials said.

“If similar numbers of people died from any other type of weather event, “it would be considered a national disaster,” noted Phoenix sustainability officer Mark Hartman.

The danger is especially acute for people like the homeless and elderly. An unusual heat wave in France in 2003 killed nearly 15,000 people, mostly old people left by vacationing relatives in homes without air conditioning as temperatures soared above 100 degrees.

Forecasts now take into consideration the heat island, which in the case of Phoenix stretches some 25 miles out from the city’s airport, National Weather Service forecaster Marvin Percha said.

To show the difference the effect can make, he noted that in June 2017 the nighttime low at Arizona State University’s grassy campus in Tempe was just 69 degrees. But the nighttime low just 5 ½ miles away at Phoenix’s Sky Harbor International Airport, where expanses of asphalt cover former farm fields, was 81 degrees.

Aimee Esposito, executive director of non-governmental Trees Matter, said her Phoenix organization this year plans to give 5,000 small trees to residents across the area’s Valley of the Sun, and will plant more at schools through educational programs.

Matt Grubisich, director of operations and urban forestry for the nonprofit Texas Trees Foundation in Dallas, said planting trees is the easiest and most effective action to ease urban heat. He said his group plants 2,500 trees such as oak, elm, pecan and ash annually.

Louisville has planted some 10,000 trees over the past three years — including maples, oaks, elms and Kentucky coffee trees — and sometimes pairs with nonprofit groups to give away trees for smaller areas, such as dogwoods, said city sustainability officer Maria Koetter.

“I really think the community is getting the message about trees,” Koetter said. “There’s usually a line around the block during the giveaways.”

Koetter said Louisville was the first major city to commission a heat management study, which was done by Stone’s climate lab. It now offers $2,000 rebates to homeowners for cool roofs.

Stone said in some cities, hundreds of thousands of trees would be needed to fully counter the heat island effect.

In Phoenix, Hartman, the sustainability officer, said the city is also looking at using lighter-colored asphalt for streets.

His team is working with Phoenix to monitor urban warming in a low-income neighborhood sandwiched between a freeway and a hospital.

Sailor said monitoring stations installed in June will track the effect as the neighborhood is redeveloped over several years.

Places like Phoenix must consider the climate implications of all development decisions, Stone said.