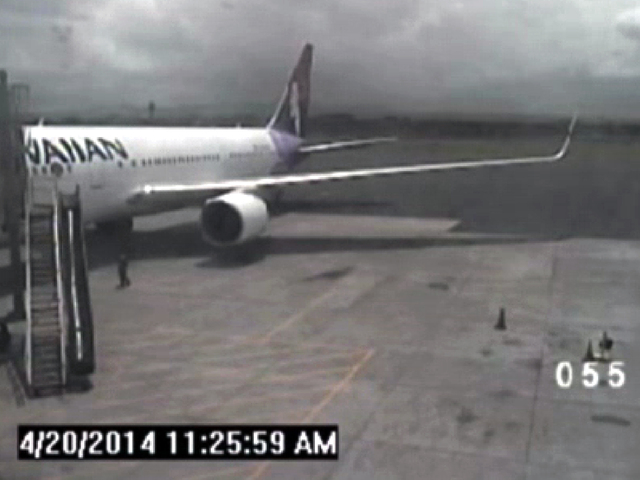 This file image taken from a surveillance video shows a California teen, left, after hopping from a jet's wheel well in Maui, Hawaii, on April 20, 2014. When it was time for that same jet to leave, the pilot, who was a different pilot than the one who had landed the jet there, said security and mechanics were holding him up, according to a Federal Aviation Administration audio recording. (AP Photo/Hawaii Department of Transportation, File)

SAN JOSE, Calif. — About an hour after a California teen was discovered on a Hawaii runway in April, a nonplussed pilot preparing to depart tells air traffic controllers he will be a bit delayed because “a guy is seeming to have stowed away in the landing gear from San Jose to Maui.”

The pilot was referring to 15-year-old Yahya Abdi, a Somali immigrant who ran away from his Santa Clara, Calif., home, hopped a fence at Mineta San Jose International Airport and climbed into the wheel well of the closest plane. The jet took off a few hours later for a 5 1/2-hour flight to Maui on April 20.

Abdi improbably survived the flight at 35,000 feet despite low oxygen and freezing temperatures.

Video footage from the Maui airport shows him dropping to the tarmac about an hour after the jet landed. But when it was time for that same jet to leave, the pilot, who was a different pilot than the one who had landed the jet there, said security and mechanics were holding him up, according to a 10-minute Federal Aviation Administration audio recording, provided exclusively to The Associated Press in response to a Freedom of Information Act request.

“Um, we have a little gate delay here. A guy is seeming to have stowed away in the landing gear from San Jose to Maui, so we have security in there looking for evidence of the guy being up there for more than, you know, ha, five minutes on the ground. So we’ll let you know when we’re ready to push,” says the pilot of outbound Hawaiian Airlines Flight 24, heading for Oakland.

“All right, 24, have your roger,” says an air traffic controller, confirming he received and understood the message. “You need any assistance with that or, er, you guys got it?”

“Nope, plenty of security here, mechanics, it’s all good, we just kind of waiting for clearance to go,” says the pilot, explaining that once the crews agree the plane is undamaged, they’ll give him the go-ahead.

The controller is calm, routine, in his response, telling the pilot he can back away from the ramp when he’s ready, because the tower doesn’t have jurisdiction over that part of the airport: “Roger, thanks, well it will be push back at your discretion.”

“Okey doke, thanks,” says the pilot.

The boy was hospitalized in Hawaii for two weeks, then flown back to California where he was placed in custody of Santa Clara County Child Protective Services. A county spokesman said Monday he cannot disclose the boy’s whereabouts.

Abdi, who lived in Santa Clara with his father, stepmother and siblings, had been unhappy in California and desperately missed his mother, according to those who know his family. School officials said he had been in the U.S. for about four years and speaks English as a second language.

Abdi’s mother Ubah Mohammed Abdule lives in a refugee camp in eastern Ethiopia and told The Associated Press she has not spoken with her son, but that the U.S. Embassy in Ethiopia took a DNA sample from her to establish a genetic relationship with her son. She said she is hopeful her asylum application may be close to conclusion because she has undergone medical tests which are part of the process.

His father, who drives a taxi in San Jose, did not respond to an interview request.

Hawaiian Airlines spokeswoman Alison Croyle said the crew of the departing flight had been told about the stowaway and the activity going on around their aircraft. She said the pilot contacted the controller because once an aircraft has received the en route clearance, there is an expectation from the air traffic control tower that the aircraft is prepared to depart and will push back shortly.

“In this instance, the pilot was advising Air Traffic Control of the delay and providing an explanation to the best of his knowledge,” said Croyle.

The FAA planned to provide a public link to the audio Tuesday.