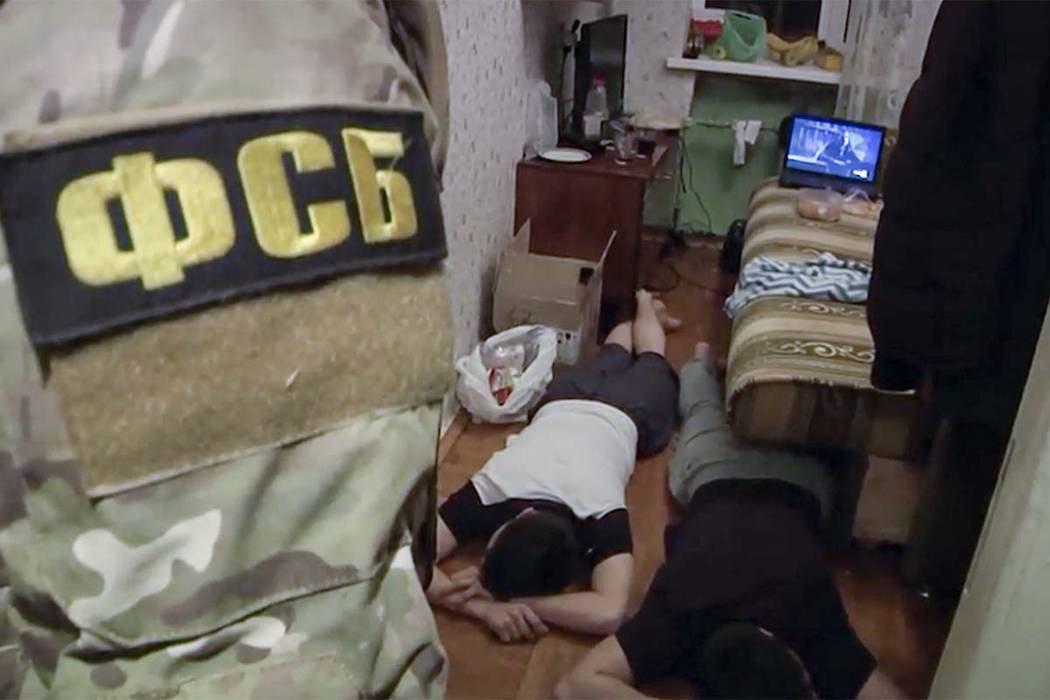 In this undated video grab provided by the RU-RTR Russian television via APTN in Moscow, Russia, Friday, Dec. 15, 2017, Russian Federal Security Service operatives detain a suspected member of the Islamic State group's cell in St. Petersburg, Russia. The FSB said Friday the suspects were plotting a suicide bombing and a series of other explosions in the city's busiest areas this coming weekend. (Russian Federal Security ServiceAP video via AP)

MOSCOW — Russian President Vladimir Putin called President Donald Trump Sunday to thank him for a CIA tip that helped thwart a series of bombings in St. Petersburg, the Kremlin said.

Putin expressed gratitude during the call for information provided by the CIA that allowed Russia’s top domestic security agency to track down and arrest a group of suspects that was planning to bomb Kazan Cathedral and other crowded sites, the Kremlin said.

The Kremlin added that Putin asked Trump to convey gratitude to the CIA and assured him that Russian law enforcement agencies would hand over any information they get about potential terror threats against the United States, as they have done in the past.

The conversation was the second phone call between the two leaders since Thursday, when Trump thanked Putin for his remarks “acknowledging America’s strong economic performance,” according to the White House.

During the first call, they also discussed ways to work together to address North Korea’s nuclear and ballistic weapons program, the White House said.

The Federal Security Service, or FSB, announced Friday that seven suspected followers of the Islamic State group had been arrested for allegedly planning to carry out terror attacks in St. Petersburg this weekend.

The agency said the suspects were plotting a suicide bombing in a church and a series of other explosions in the city’s busiest areas this coming weekend on IS orders. It said a search of a St. Petersburg apartment found explosives, automatic weapons and extremist literature.

Russian news reports said that the Kazan Cathedral was the prime target.

Russian TV stations ran footage of FSB operatives outside an apartment building detaining a suspect, who was later shown confessing that he was told to prepare homemade bombs rigged with shrapnel.

The reports included footage of a metal container, which the suspects used as a laboratory for making explosives, according to the FSB. Another video showed operatives breaking the doors and raiding an apartment used by other suspects.

Last week, the FSB said it also arrested several IS-linked suspects in Moscow, where they allegedly were plotting a series of suicide bombings over New Year’s.

In April, a suicide bombing in the St. Petersburg’s subway left 16 dead and wounded more than 50.