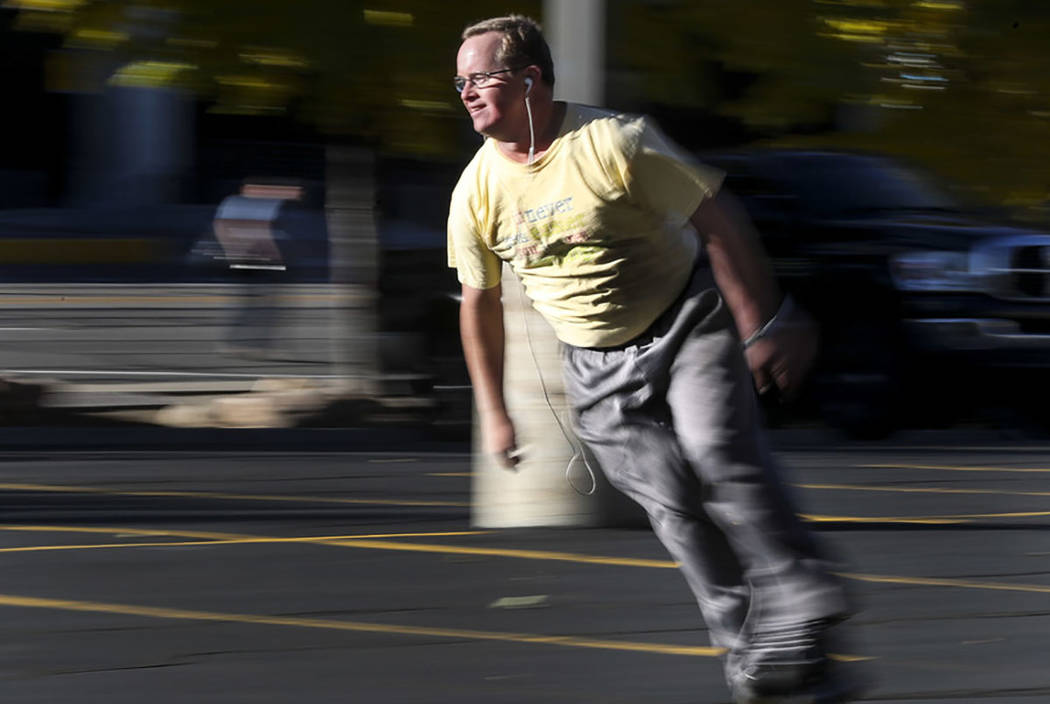 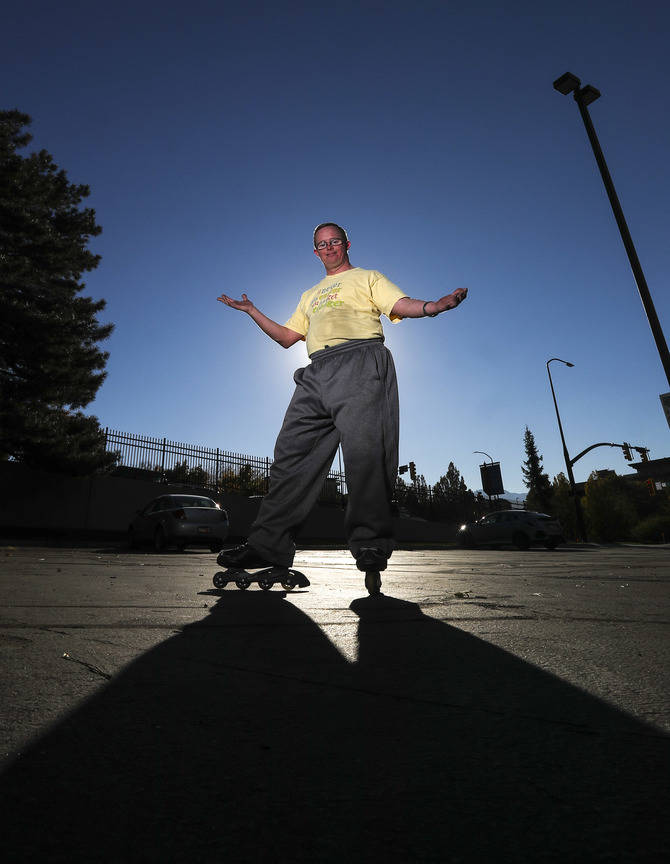 This photo taken Oct. 19, 2018, shows Reid Cornish posing for a portrait after finishing his daily, morning in-line skating performance in downtown Salt Lake City. Cornish, who has Down Syndrome, skates in the parking lot on the corner of State Street and North Temple. (Steve Griffin/The Deseret News via AP) 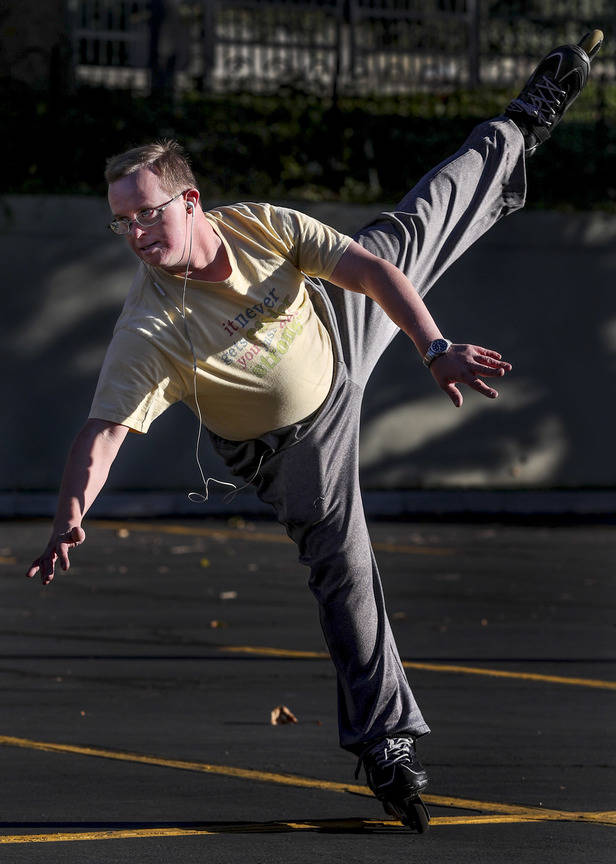 This photo taken Oct. 19, 2018, shows Reid Cornish gliding in an arc during his daily, morning in-line skating performance in downtown Salt Lake City on Friday, Oct. 19, 2018. Cornish, who has Down Syndrome, skates in the parking lot on the corner of State Street and North Temple. (Steve Griffin/The Deseret News via AP)

After a quick walk from his parents’ apartment in downtown Salt Lake City, he reaches his parking lot of choice, turns on “The Greatest Showman” soundtrack and begins skating.

“I’m like a figure skater,” Cornish, 34, said. “I picture myself on ice doing dance moves from musicals.”

Some days Cornish skates for hours — it just depends on how he’s feeling. Summer heat doesn’t stop him; neither does a cold winter morning.

Cornish, who has Down syndrome, said rollerblading makes him feel like he’s flying through the air.

“It keeps me limber,” he said above the morning traffic. “Skating makes me happy all the time.”

‘It makes me happy’

It seems Cornish always has a smile on his face — except in a focused moment of skating — and his contagious grins and performances have made him a staple for employees like Londyn LeCheminant arriving to work downtown.

In fact, LeCheminant enjoys Cornish’s morning routine so much she recorded it on her phone so she could show her husband.

“It makes me happy, and I feel like every time I walk by and I see him, he’s so (joyful), moving around and everything, it just makes me happy,” she said. “It makes my morning. I always look forward to seeing him when I walk to work.”

As passersby wave and shout hello, Cornish, clad in a pale yellow shirt and gray sweatpants, notes that he has friends scattered throughout the city.

“It makes me feel so blessed,” he said of the people who stop to talk with him. “They tell me, ‘I love this.’”

Cornish, whose father, Devn Cornish, is a General Authority Seventy of The Church of Jesus Christ of Latter-day Saints, was born in San Antonio. He lived in San Diego, Atlanta and the Dominican Republic twice before moving to Salt Lake City two years ago.

It didn’t take long for Reid Cornish to locate a spot for his morning skating routine.

“He used to just skate in our garage in Atlanta,” recalled his mother, Elaine Cornish. “He’d take music out there and skate in circles and make up tricks with turns and cartwheels.”

The skater’s practicing led him to recruit family and neighbors to be his audience — something he continues today, as he’ll often pass out flyers inviting people to come watch him skate in Salt Lake City.

“He’d put on skating shows for people and got a lot of attention and applause, which he liked, and kept doing it,” Elaine Cornish said of her avid skater son, her youngest of six. “It’s been part of his life for a long time.”

When Reid Cornish lived in the Dominican Republic while his dad was in the Caribbean Area presidency for The Church of Jesus Christ, he would skate in front of the Santo Domingo Missionary Training Center.

“It’s good recreation for him; he likes to be busy,” Elaine Cornish said. “He likes to be in and out of the house doing active things.”

Occasionally, that constant activity gets Reid Cornish into trouble — he once had an accident while skating and broke his ankle, which kept him off his skates for a few months.

“I do stretches before I start now so that doesn’t happen again,” he said.

When he’s not skating to his heart’s content, Reid Cornish, who began skating when he was 6, loves to play volleyball and basketball. He also boasts a collection of more than 300 movies — musicals are his favorite. Twice a week, Reid Cornish volunteers at the Salt Lake Temple, and he likes to share the story of when he saw President Russell M. Nelson, who told him that he was his best buddy.

“Reid’s quite sociable and loves to make people happy,” Elaine Cornish said. “He calls that his mission in life.”

For commuters and friends, Reid Cornish’s performances are quite possibly the greatest morning show in Salt Lake City.

“He gets a lot of satisfaction from it,” Elaine Cornish said. “He knows he’s good at it and gets a lot of praise. He always dreams of performing in front of big audiences.”

Reid Cornish, who dubbed himself the Rollerblade King, knows his passion for skating also doubles as a way to brighten other people’s days.

“I’m a cheerful spirit,” he said. “I have a great gift of sharing cheer to everybody by doing this.”