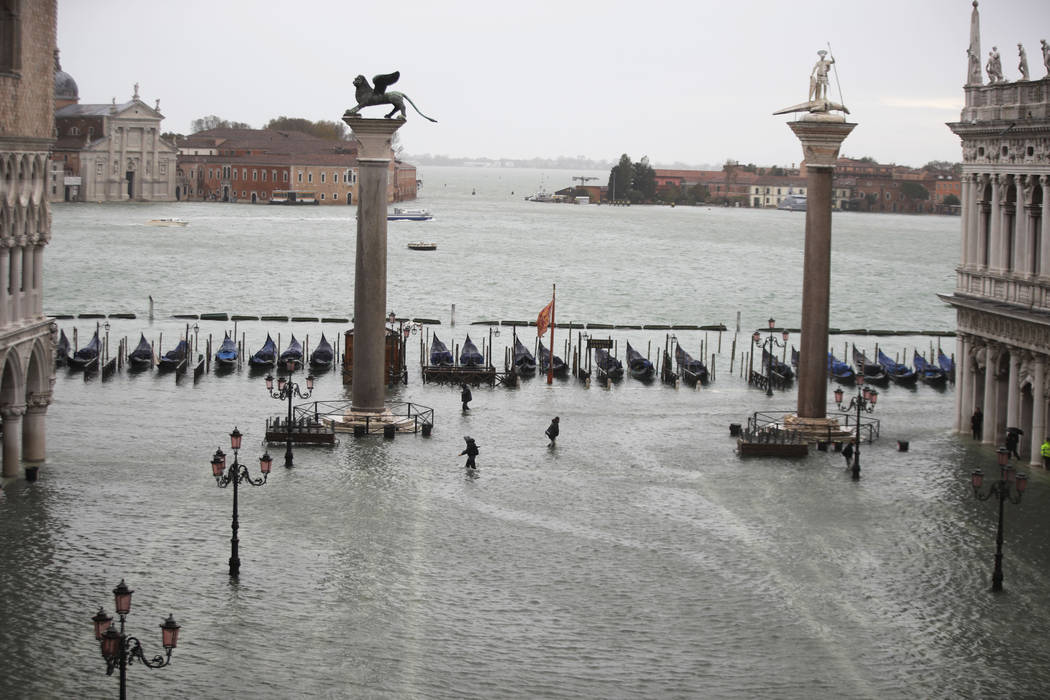 People make their way in a flooded St. Mark's Square in Venice, Italy, Friday, Nov. 15, 2019. Waters are rising in Venice where the tide is reaching exceptional levels just three days after the Italian lagoon city experienced its worst flooding in more than 50 years. (AP Photo/Luca Bruno) 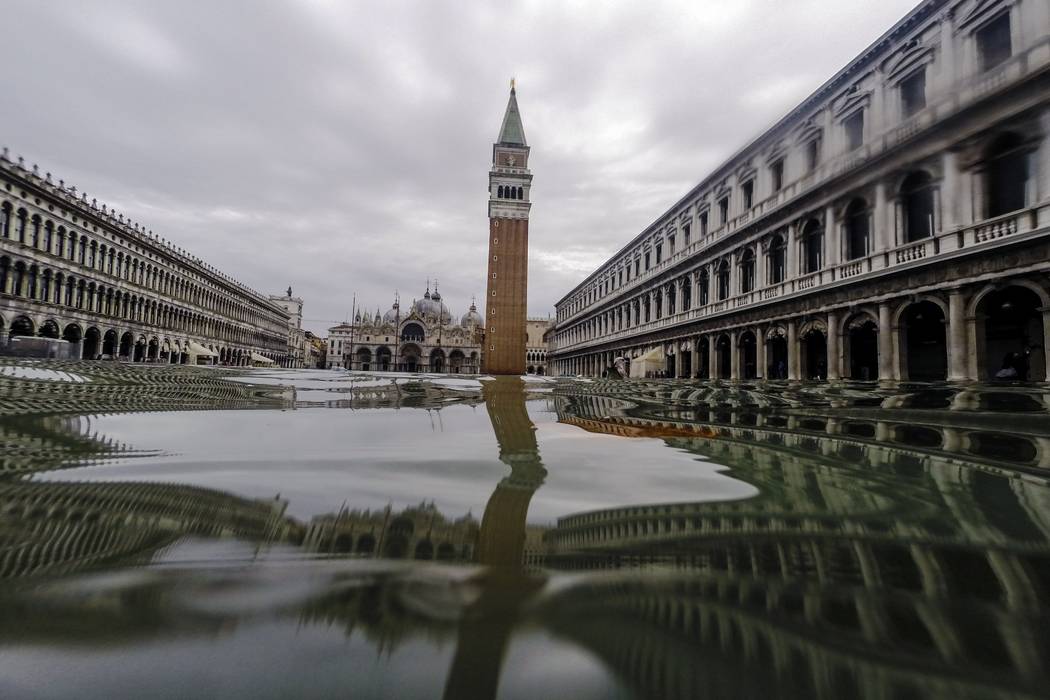 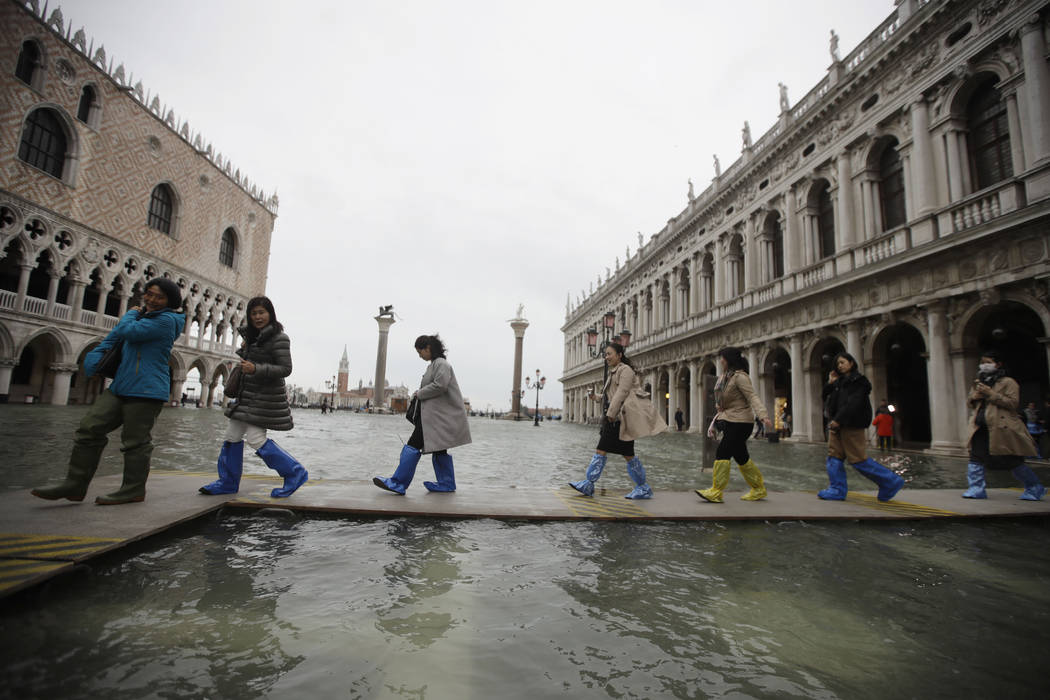 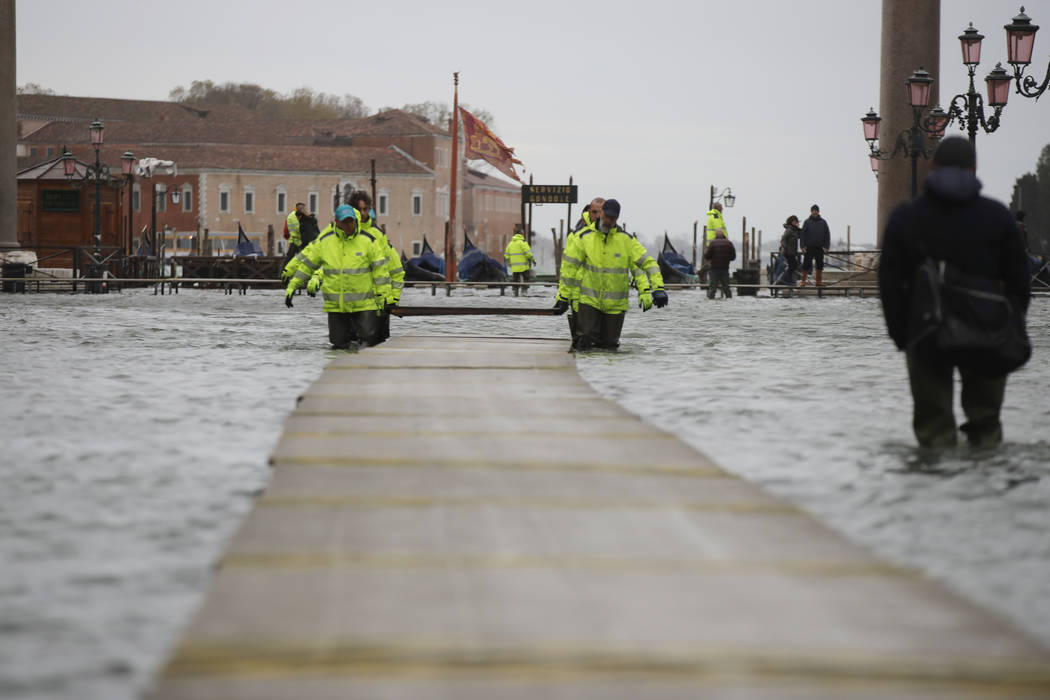 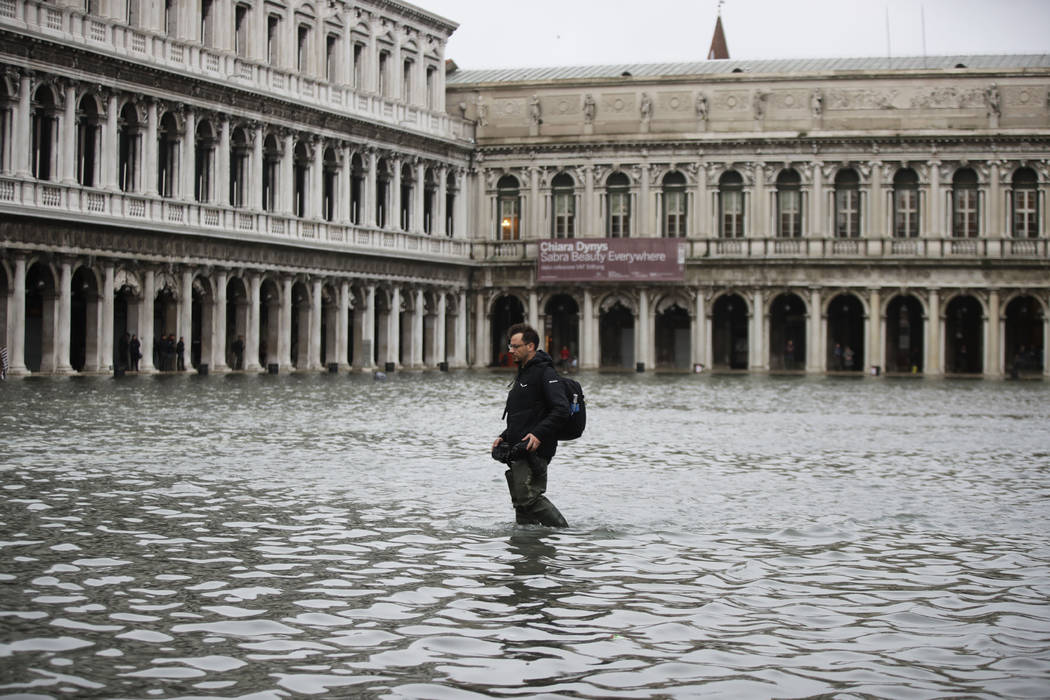 The high tide peaked at 1.54 meters (5 feet) above sea level just before noon Friday, flooding most of the historic World Heritage city’s center.

Venice Mayor Luigi Brugnaro said the damage is estimated at hundreds of millions of euros and blamed climate change for the “dramatic situation.” He also called for the speedy completion of the city’s long-delayed Moses flood defense project.

Brugnaro told reporters that he was forced to ask police to block off St. Mark’s Square on Friday, which was covered in knee-high water. Workers in high boots removed the platforms used by the public to cross the iconic square without getting wet.

That prompted the Italian government to declare a state of emergency on Thursday, approving 20 million euros ($22.1 million) to help Venice repair the most urgent damage.

“Venice is the pride of all of Italy,” Brugnaro said Friday. “Venice is everyone’s heritage, unique in the world. Thanks to your help, Venice will shine again.”

Venice, a lagoon city built amid a system of canals, is particularly vulnerable to a combination of rising sea levels due to climate change coupled with the city’s well-documented sinking into the mud. The sea level in Venice is 10 centimeters (4 inches) higher than it was 50 years ago, according to the city’s tide office.

More than 50 churches have reported damage from the tides, Culture Minister Dario Franceschini said as he inspected the city. Carabinieri officers from the corps’ world-renowned and highly-trained squad of art experts were being deployed to map damage to art treasures, a job that is expected to take some time.

“While the water is still there, it’s difficult to know what the (full) damage is,” Franceschini said.

He said tax breaks for those who donate to help restore state monuments and artworks will be applied to church art repairs as well.

The Italian Space Agency said it was studying radar data from satellites to detect any signs that Venice bell towers may have shifted or that their foundations might have weakened as they were buffeted by the fast-rising waters.

Many people were rising to the challenge of saving Venice’s many treasures.

University students in Venice rushed to libraries and other institutions filled with books and manuscripts to help shift the material to higher stories.

The Italian Society of Authors and Editors, which said Venice’s book stores and libraries were “gravely damaged” by the high water, launched a fundraising campaign. Pitching for donations from Italy and abroad, the group said it was important to “take the side of those who every day are on the front lines for the defense of Italian culture.”

It said one Venice bookstore, poignantly named “Acqua Alta” (High Water), had been completely submerged by the rushing water.

The leader of the right-wing opposition League party, Matteo Salvini, visited Venice on Friday and also called for renewed efforts to complete the Moses flood defense project, which the Italian government now expects to be completed by 2021.

“We can’t waste time, this city is crying for help,” Salvini said.

Tuesday’s devastating floods have reignited a yearslong debate over Moses, a multibillion-euro project that has been under construction since 2003. The project has not yet been activated, delayed repeatedly by corruption scandals, cost overruns and opposition from environmentalists who were worried about its effects on Venice’s delicate lagoon ecosystem.