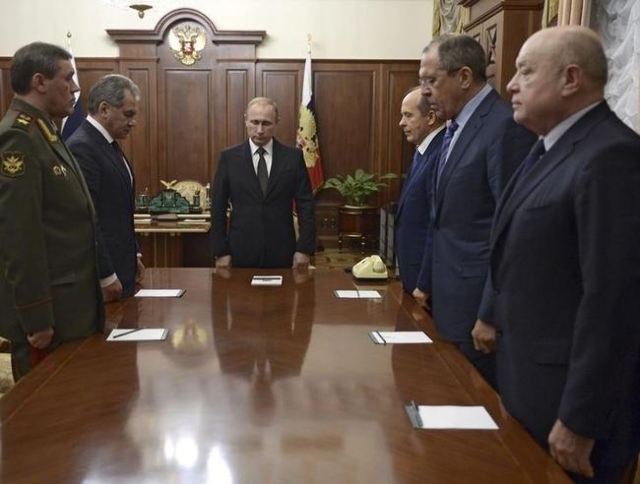 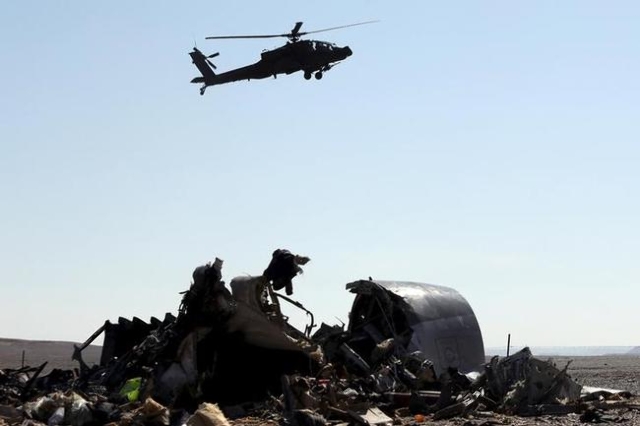 MOSCOW — President Vladimir Putin vowed to hunt down those responsible for blowing up a Russian airliner over Egypt and intensify air strikes against Islamists in Syria, after the Kremlin concluded a bomb had destroyed the plane last month, killing 224 people.

“We will find them anywhere on the planet and punish them,” Putin said at a somber Kremlin meeting broadcast on Tuesday. The FSB security service swiftly announced a $50 million bounty on the bombers.

Until now, Russia had played down assertions from Western countries that the Oct. 31 crash was the work of terrorists, saying it was important to let the official investigation run its course.

But four days after Islamist gunmen and bombers killed at least 129 people in Paris, Alexander Bortnikov, the head of the FSB, told a late night meeting that traces of foreign-made explosive had been found on fragments of the downed plane and on passengers’ personal belongings.

“According to an analysis by our specialists, a homemade bomb containing up to 1 kilogram of TNT detonated during the flight, causing the plane to break up in mid air, which explains why parts of the fuselage were spread over such a large distance,” said Bortnikov at the meeting in footage released by the Kremlin.

“We can unequivocally say it was a terrorist act,” he said.

Egyptian authorities have detained two employees of Sharm al-Sheikh airport for questioning in connection with the downing of the Russian jet, two security officials and an airport employee said on Tuesday.

“Seventeen people are being held, two of them are suspected of helping whoever planted the bomb on the plane at Sharm al-Sheikh airport,” said one of the security officials who both declined to be named.

The Airbus A321, operated by Metrojet, had been returning Russian holiday makers from Sharm al-Sheikh in Egypt to St Petersburg when it broke up over the Sinai Peninsula, killing all on board. A group affiliated with Islamic State claimed responsibility, but until Tuesday Russia had said terrorism was just one possible scenario.

Putin, wearing a dark suit, presided over a minute of silence in memory of the victims at the Kremlin meeting, before telling security and military chiefs the incident was one of the bloodiest crimes in modern Russian history and ordering the air force to intensify its air strikes in Syria in response.

“Our air force’s military work in Syria must not simply be continued,” he said. “It must be intensified in such a way that the criminals understand that retribution is inevitable.”

Putin said he expected military chiefs to present him with specific proposals on how Russiacould ramp up its campaign. His spokesman, Dmitry Peskov, told reporters Putin was expected to visit the defense ministry later on Tuesday.

A senior French government source said Russia had already launched air strikes against the Islamic State stronghold of Raqqa in northern Syria on Tuesday, a sign, the source said, thatRussia was becoming more concerned about the threat posed by IS.

Russia began air strikes in Syria at the end of September. It has always said its main target is Islamic State, but most of its bombs in the past hit territory held by other groups opposed to its ally, President Bashar al-Assad.

Putin, in language reminiscent of how he talked about Chechen militants during a war when he came to power 15 years ago, ordered the secret services to hunt down those responsible.

“We must do this without any statute of limitations and we must find out all their names,” he said, invoking Russia‘s right to self defense under the United Nations charter.

“Anyone who tries to help the criminals should know that the consequences for trying to shelter them will lie completely on their shoulders.”

138 deaths reported as 7.8 quake knocks down buildings in Turkey, Syria