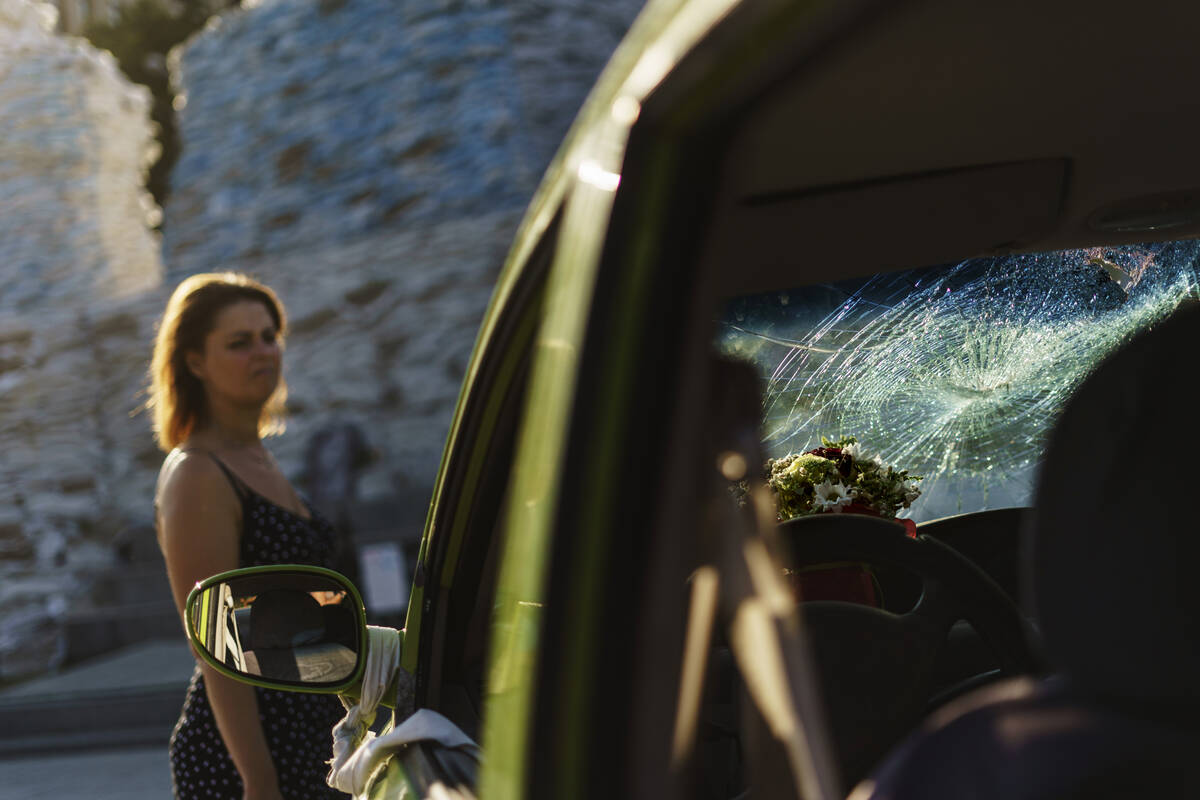 A woman looks at a civilian's car shot at by Russian forces exhibited at Mykhailivs'ka Square along with damaged Russian military equipment as a symbol of Ukraine's resistance against the invasion in Kyiv, Ukraine, Saturday, July 30, 2022. According to a plaque displayed by the National Museum of the Military History of Ukraine, the family was evacuating from Bucha when Russian troops opened fire on their convoy injuring two people. (AP Photo/David Goldman) 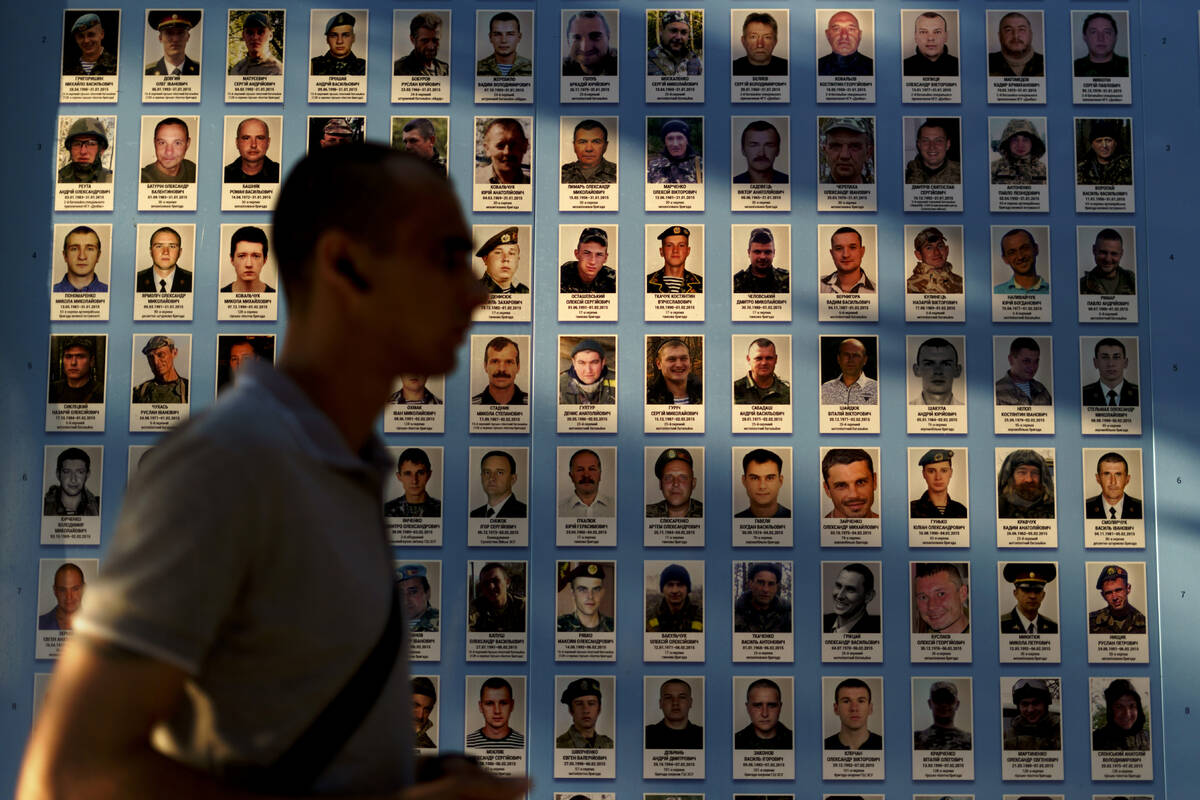 Photos of Ukrainians killed fighting against pro-Russian separatists since 2014 in the country's east are displayed at a memorial in Kyiv, Ukraine, Saturday, July 30, 2022. (AP Photo/David Goldman) 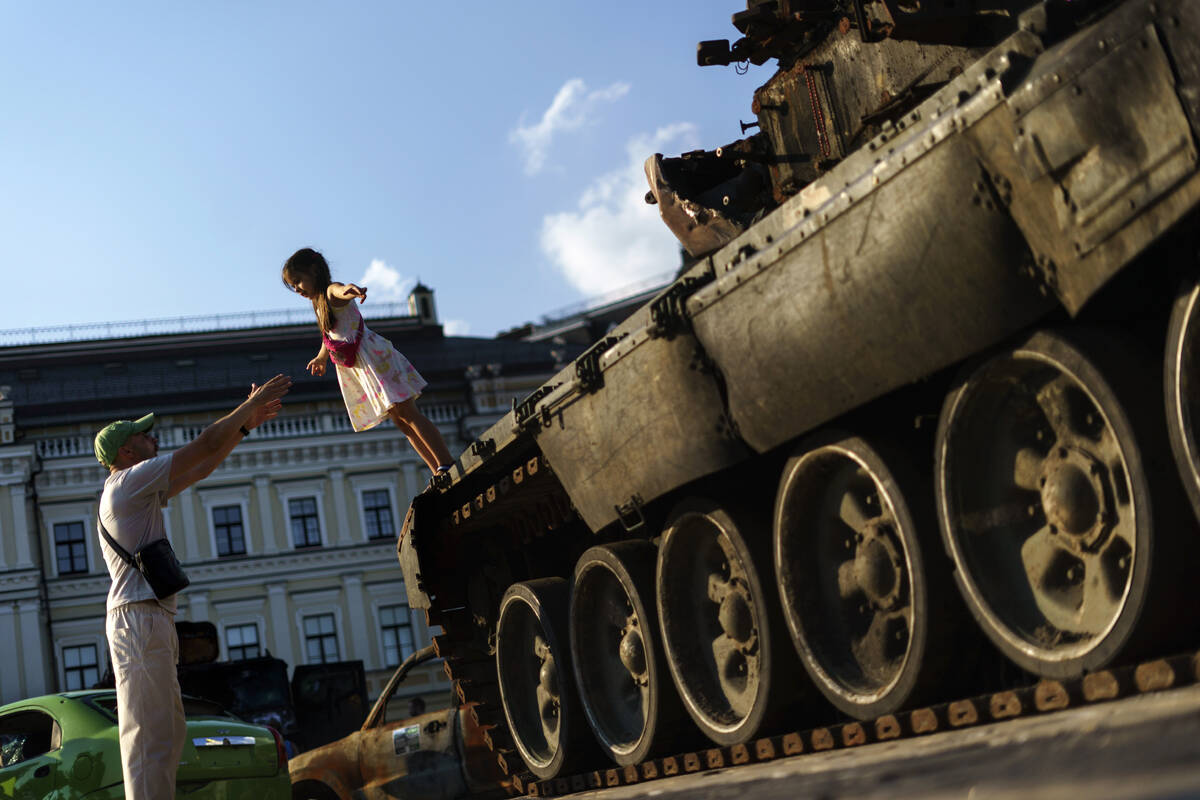 A young girl falls into her father's arms off a Russian tank that was destroyed and exhibited at Mykhailivs'ka Square with other damaged Russian military equipment as a symbol of Ukraine's resistance against the invasion in Kyiv, Ukraine, Saturday, July 30, 2022. (AP Photo/David Goldman) 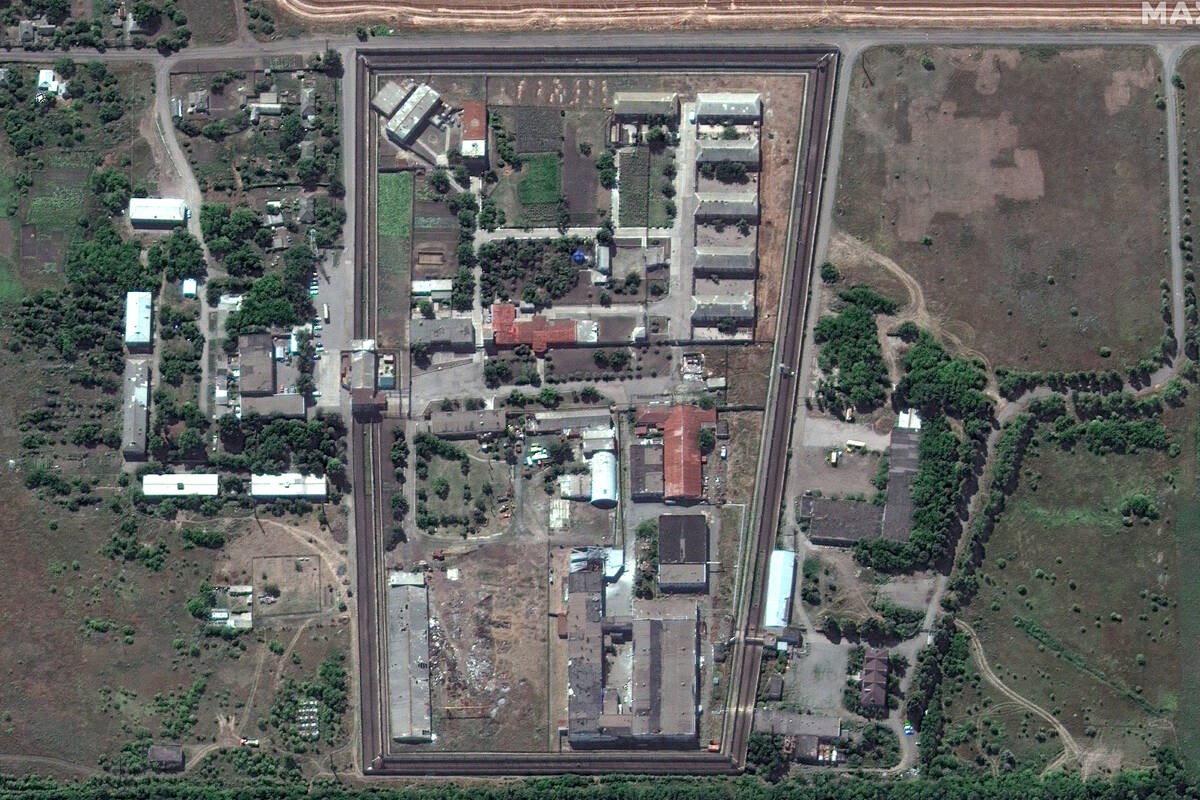 In this satellite photo provided by Maxar Technologies, a view of the Olenivka detention center, in Eastern Donetsk province, after an attack on the prison reportedly killed Ukrainian soldiers captured in May after the fall of Mariupol, a Black Sea port city where troops and the Azov Regiment of the national guard famously held out against a months-long Russian siege. Separatist authorities and Russian officials said the attack killed 53 Ukrainian POWs and wounded another 75. (Satellite image ©2022 Maxar Technologies via AP) 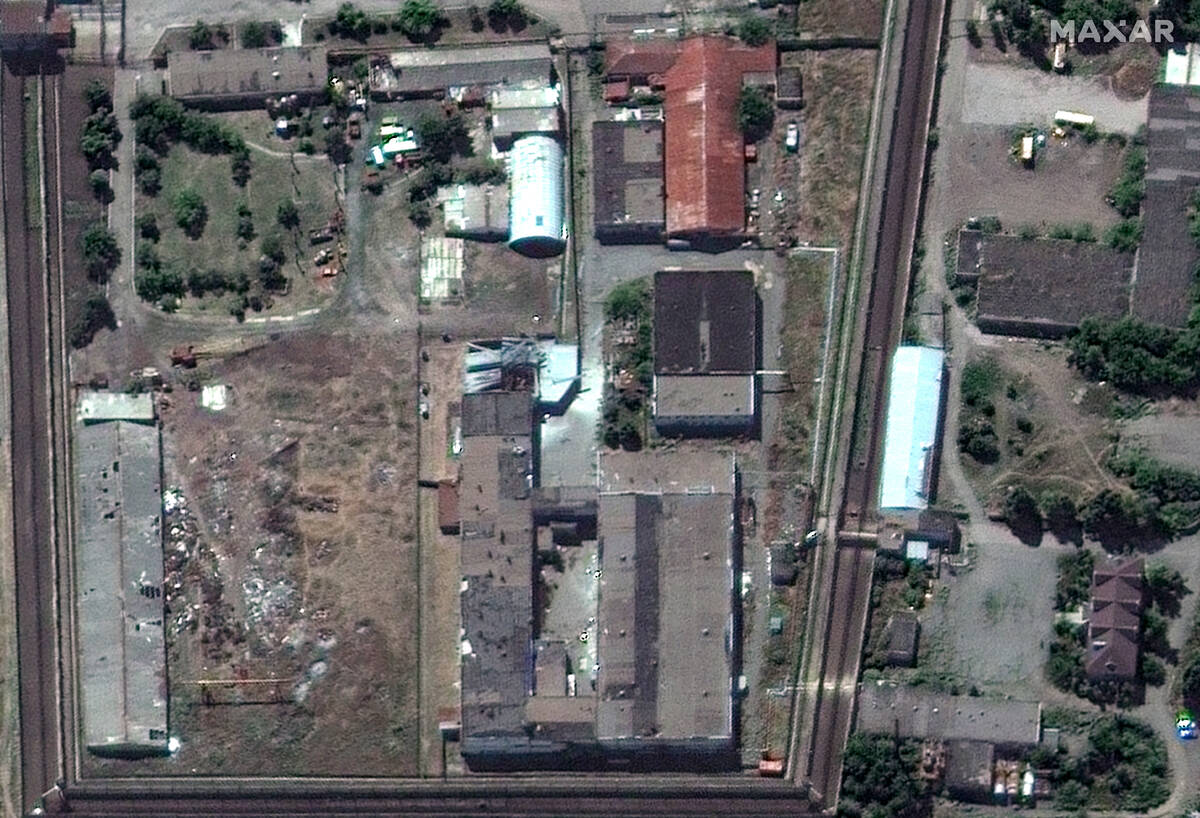 In this satellite photo provided by Maxar Technologies, a view of the Olenivka detention center, in Eastern Donetsk province, after an attack on the prison reportedly killed Ukrainian soldiers captured in May after the fall of Mariupol, a Black Sea port city where troops and the Azov Regiment of the national guard famously held out against a months-long Russian siege. Separatist authorities and Russian officials said the attack killed 53 Ukrainian POWs and wounded another 75. (Satellite image ©2022 Maxar Technologies via AP)

KYIV, Ukraine (AP) — A small explosive device carried by a makeshift drone blew up Sunday at the headquarters of Russia’s Black Sea Fleet on the Crimean Peninsula, wounding six people and prompting the cancellation of ceremonies there honoring Russia’s navy, authorities said.

Meanwhile, one of Ukraine’s richest men, a grain merchant, was killed in what Ukrainian authorities said was a carefully targeted Russian missile strike on his home.

There was no immediate claim of responsibility for the drone explosion in a courtyard at the naval headquarters in the city of Sevastopol. But the seemingly improvised, small-scale nature of the attack raised the possibility that it was the work of Ukrainian insurgents trying to drive out Russian forces.

A Russian lawmaker from Crimea, Olga Kovitidi, told Russian state news agency RIA-Novosti that the drone was launched from Sevastopol itself. She said the incident was being treated as a terrorist act, the news agency said.

Crimean authorities raised the terrorism threat level for the region to “yellow,” the second-highest tier.

Sevastopol, which was seized along with the rest of Crimea from Ukraine by Russia in 2014, is about 170 kilometers (100 miles) south of the Ukrainian mainland. Russian forces control much of the mainland along the Black Sea.

The Black Sea Fleet’s press service said the drone appeared to be homemade. It described the explosive device as “low-power.” Sevastopol Mayor Mikhail Razvozhaev said six people were wounded. Observances of Russia’s Navy Day holiday were canceled in the city.

“Did the occupiers admit the helplessness of their air defense system? Or their helplessness in front of the Crimean partisans?” Oleksiy Arestovich said on Telegram.

If such an attack is possible by Ukraine, he said, “the destruction of the Crimean bridge in such situations no longer sounds unrealistic” — a reference to the span that Russia built to connect its mainland to Crimea after the annexation.

Elsewhere in Ukraine, the mayor of the major port city of Mykolaiv, Vitaliy Kim, said shelling killed one of Ukraine’s wealthiest men, Oleksiy Vadatursky, and his wife, Raisa. Vadatursky headed a grain production and export business.

It “was not an accident, but a well-thought-out and organized premeditated murder. Vadatursky was one of the largest farmers in the country, a key person in the region and a major employer. That the exact hit of a rocket was not just in a house, but in a specific wing, the bedroom, leaves no doubt about aiming and adjusting the strike,” he said.

In the Sumy region in Ukraine’s north, near the Russian border, shelling killed one person, the regional administration said. And three people died in attacks over the past day in the Donetsk region, which is partly under the control of Russian-backed separatist forces, said regional Gov. Pavlo Kyrylenko.

Podolyak said on Twitter that images of the prison where at least 53 Ukrainian prisoners of war were killed in an explosion on Friday indicated that the blast came from within the building in Olenivka, which is under Russian control.

Russian officials have claimed the building was attacked by Ukraine with the aim of silencing POWs who might be giving information about Ukrainian military operations. Ukraine has blamed Russia for the explosion.

Satellite photos taken before and after show that a small, squarish building in the middle of the prison complex was demolished, its roof in splinters.

Podolyak said those images and the lack of damage to adjacent structures showed that the building was not attacked from the air or by artillery. He contended the evidence was consistent with a thermobaric bomb, a powerful device sometimes called a vacuum bomb, being set off inside.

The International Red Cross asked to immediately visit the prison to make sure the scores of wounded POWs had proper treatment, but said Sunday that its request had yet to be granted. It said that denying the Red Cross access would violate the Geneva Convention on the rights of POWs.

Follow AP’s coverage of the Russia-Ukraine war at https://apnews.com/hub/russia-ukraine