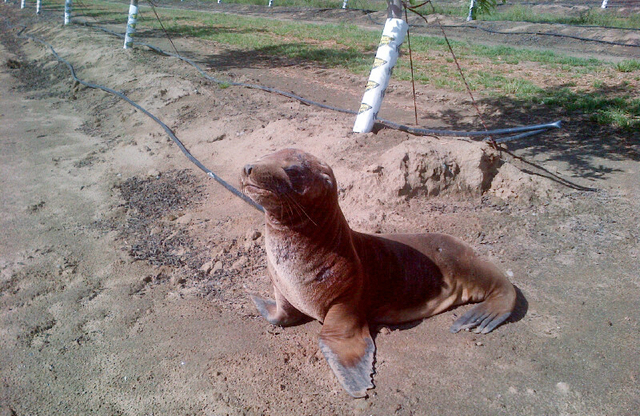 The sea lion pup named Hoppie was found at Mape's Ranch near Modesto, Calif. Workers at the central California ranch could hardly believe their eyes when they spotted a sea lion pup hopping through an almond orchard, a mile from the San Joaquin River in March. Hoppie is now recovering at The Marine Mammal Center in Sausalito, Calif., and is undergoing treatment for sores and getting some much-needed nourishment in hopes of returning him to the wild. (AP Photo/San Joaquin River National Wildlife Refuge, Eric Hopson)

MERCED, Calif. — Workers at a central California ranch could hardly believe their eyes when they spotted a sea lion pup hopping through an almond orchard, a mile from the San Joaquin River.

The Merced Sun-Star reported Tuesday that the ranch hands quickly got in touch with wildlife officials after discovering the confused animal last month at Mape’s Ranch near Modesto.

A Marine Mammal Center volunteer eventually coaxed the lost sea lion into a cage, where it promptly fell asleep.

The newspaper reports the 36-pound sea lion, nicknamed Hoppie, is recovering at the center. Hoppie is undergoing treatment for sores and getting some nourishment in hopes of returning him to the wild.

Officials aren’t sure why the sea lion left the river or hopped such a long way on the ground.