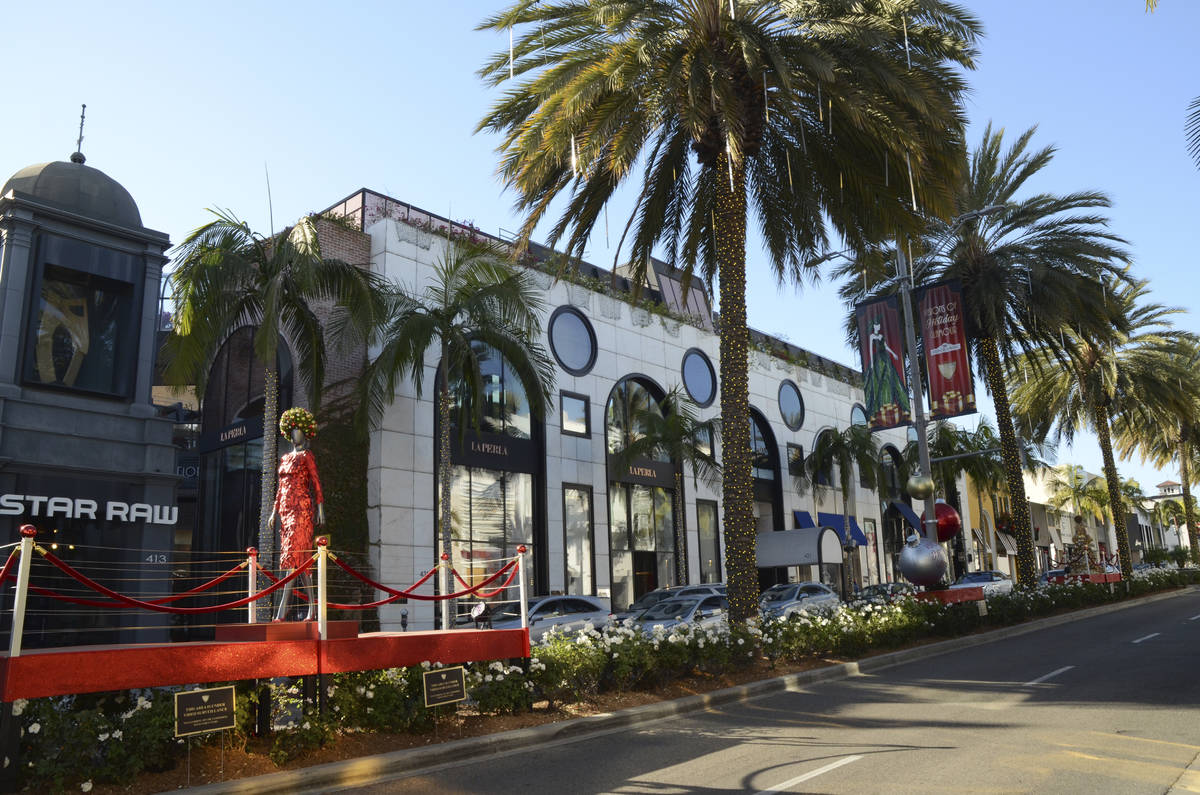 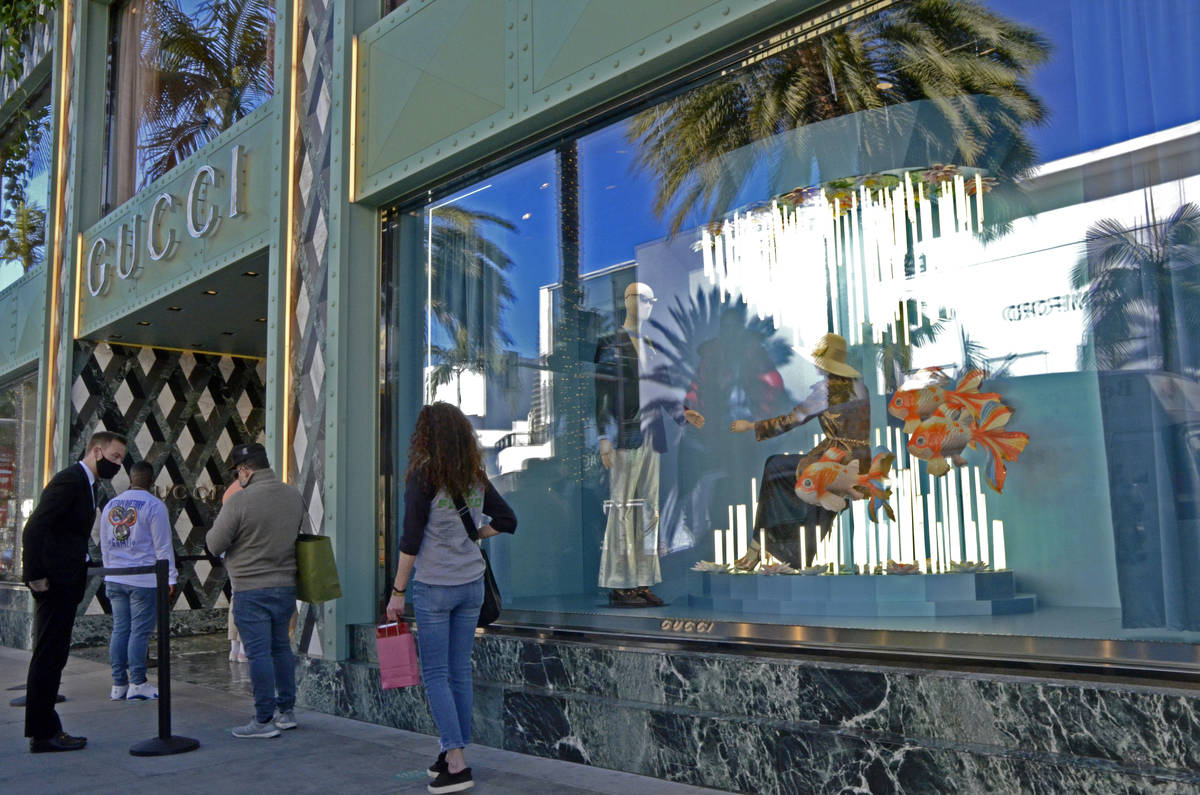 An employee at Gucci talks to a man waiting on a socially distanced line of shoppers waiting to enter the luxury designer boutique on Rodeo Drive, Thursday, Dec. 3, 2020, in Beverly Hills, Calif. The new stay-at-home order will last at least three weeks, cutting sharply into the most profitable shopping season and threatening financial ruin for businesses already struggling after 10 months of on-again, off-again restrictions and slow sales because of the pandemic. (AP Photo/Pamela Hassell) 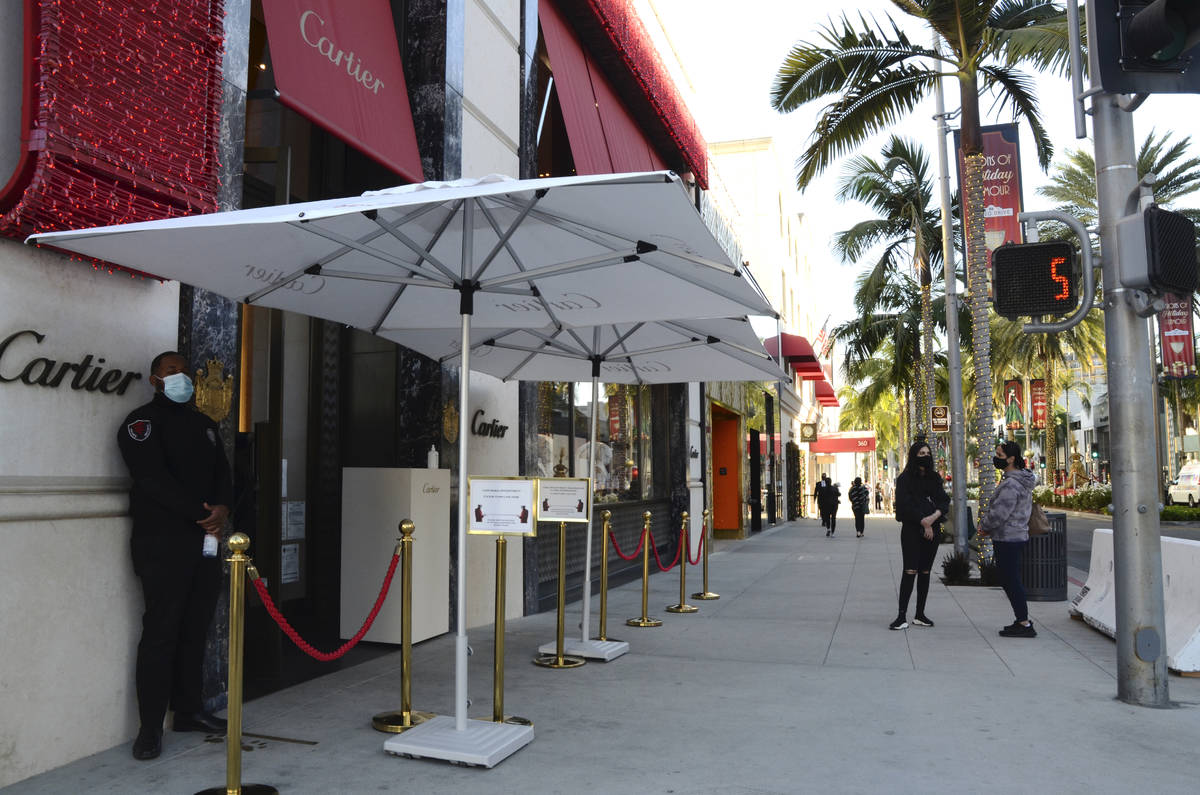 A security guard in a face mask stands outside Cartier jewelry shop with no customers on line during the coronavirus pandemic on Rodeo Drive, Thursday, Dec. 3, 2020, in Beverly Hills, Calif. The new stay-at-home order will last at least three weeks, cutting sharply into the most profitable shopping season and threatening financial ruin for businesses already struggling after 10 months of on-again, off-again restrictions and slow sales because of the pandemic. (AP Photo/Pamela Hassell) 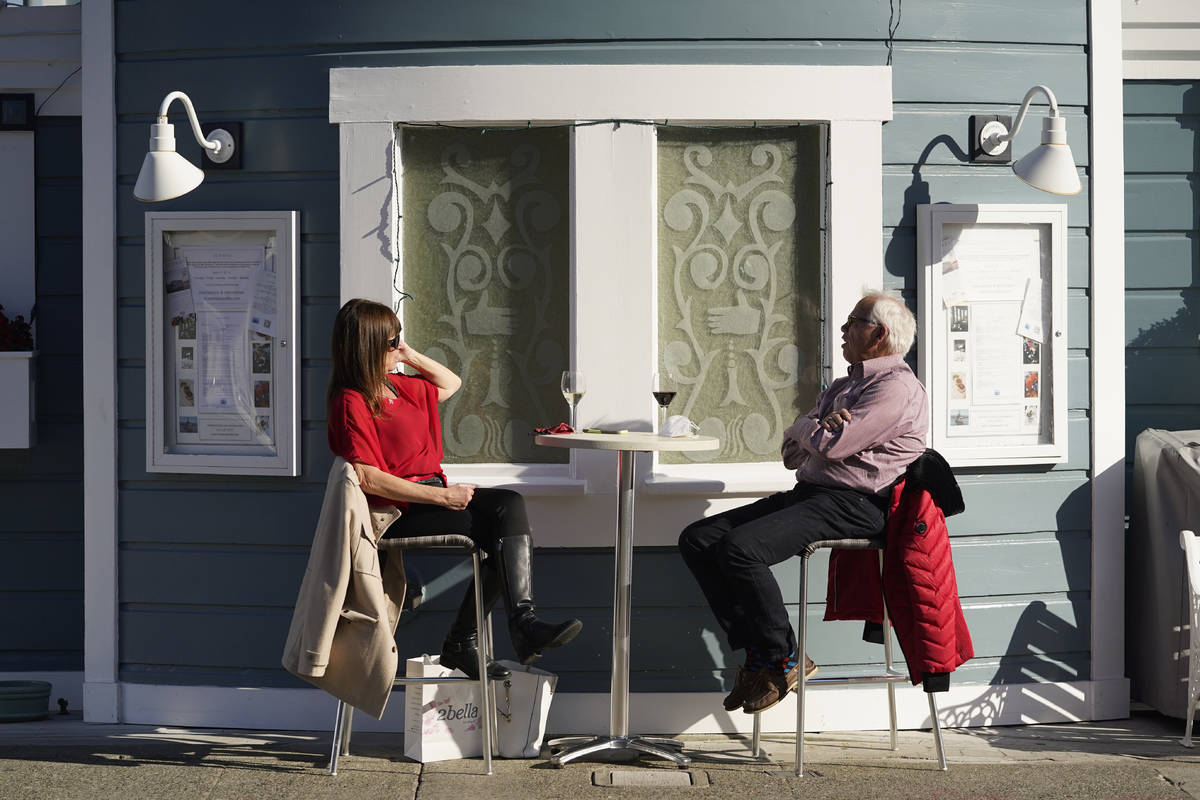 A couple dines outdoors at Scoma's restaurant Friday, Dec. 4, 2020, in Sausalito, Calif. The health officers in six San Francisco Bay Area regions have issued a new stay-at-home order as the number of virus cases surge and hospitals fill. The changes announced Friday will take effect in most of the area at 10 p.m. Sunday and last through Jan. 4. It means restaurants will have to close to indoor and outdoor dining, bars and wineries must close along with hair and nail salons and playgrounds. (AP Photo/Eric Risberg) 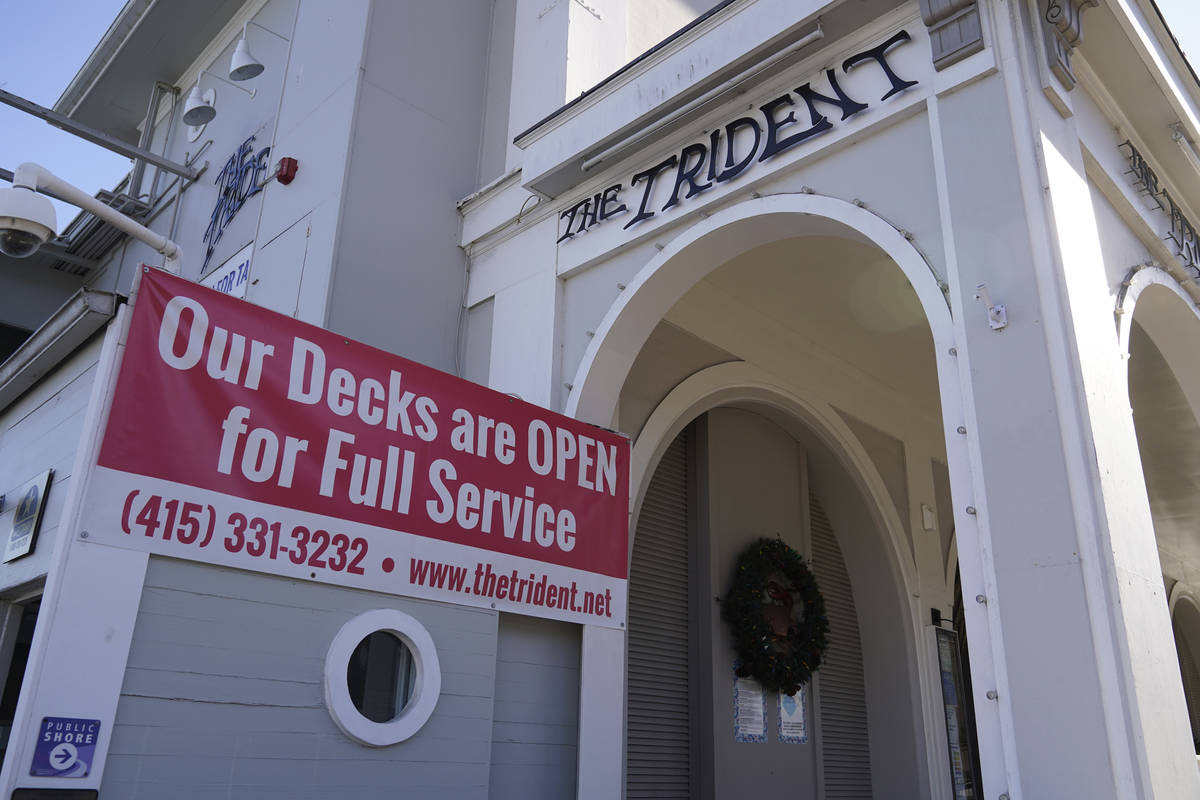 A sign advertises outdoor dining at The Trident restaurant Friday, Dec. 4, 2020, in Sausalito, Calif. The health officers in six San Francisco Bay Area regions have issued a new stay-at-home order as the number of virus cases surge and hospitals fill. The changes announced Friday will take effect in most of the area at 10 p.m. Sunday and last through Jan. 4. It means restaurants will have to close to indoor and outdoor dining, bars and wineries must close along with hair and nail salons and playgrounds. (AP Photo/Eric Risberg)

SAN FRANCISCO — The vast region of Southern California was placed under new lockdown orders as the state scrambles to slow the rapid escalation of coronavirus cases that threatens to overwhelm hospitals.

The California Department of Public Health announced Saturday that a shortage of intensive care beds in the 11-county Southern California region had triggered the new measures, which take effect Sunday evening.

The region includes the cities of Los Angeles and San Diego and is home to about 24 million people, almost half of the state’s population. Earlier Saturday, the order was also put in effect for the San Joaquin Valley in central California.

The new state stay-at-home order bans all on-site restaurant dining and closes hair and nail salons, movie theaters and many other businesses, as well as museums and playgrounds. It stays in effect for at least three weeks. It also means people may not congregate with anyone outside their household and must always wear masks when they go outside.

Five San Francisco Bay Area counties imposed a new stay-at-home order for their residents that will take effect Sunday. Southern California and a large swath of the central portion of the state could join this weekend.

Those two regions have seen their intensive care unit capacity fall below the 15% threshold that under a new state stay-at-home order will trigger new restrictions barring all on-site restaurant dining and close hair and nail salons, movie theaters and many other businesses, as well as museums and playgrounds.

If their capacity remains below that level when the data is updated Saturday, the closures will take effect Sunday and stay in effect at least three weeks.

Gov. Gavin Newsom announced the new plan Thursday. It is the most restrictive order since he imposed the country’s first statewide stay-at-home rule in March.

The new order divides the state into five regions and uses ICU capacity as the trigger for closures. Newsom also says people may not congregate with anyone outside their household and must always wear masks when they go outside.

As of Friday night, the 11-county Southern California region had only 13.1% of its ICU beds available, the California Department of Public Health reported. The figure was 14.1% for the San Joaquin Valley region, composed of a dozen counties in the agricultural Central Valley and rural areas of the Sierra Nevada.

The other three regions — Greater Sacramento, Northern California and San Francisco Bay Area — were all around 21%.

But health officers in five of the Bay Area’s 11 counties didn’t wait. On Friday, they adopted the state’s stay-at-home order. The changes begin to take effect Sunday night in San Francisco, Santa Clara, Marin, Alameda and Contra Costa counties, as well as the city of Berkeley.

“We don’t think we can wait for the state’s new restrictions to go into effect. … This is an emergency,” Contra Costa Health Officer Chris Farnitano said.

“Our biggest fear all along — that we won’t have a bed for you or your mother or your grandmother or grandfather when they get sick — is the reality we’ll be facing unless we slow the spread,” San Francisco Mayor London Breed said.

The Bay Area order will last at least through Jan. 4, a week longer than the state’s timeline, and came as the state recorded another daily record number of new cases with 22,018. Hospitalizations topped 9,000 for first time and ICU patients were at a record 2,152.

The new shutdowns were a gut-wrenching move for small businesses that have struggled to survive over nearly a year in which they were repeatedly ordered to close, then allowed to reopen but with complex safety precautions.

Michelle Saunders James was in tears Friday at the thought of closing down her Oakland nail salon just five weeks after reopening it.

“We wear (face) shields. We take temperatures. We do everything we are told to do so everyone feels safe, including our staff and team,” she told KGO-TV. “So I don’t understand why it’s not enough and I’m terribly sad and afraid.”

In the East Bay, Berkeley Bowl’s two grocery stores already had laid in stocks of essentials in case of a return of panic buying that was seen after the state issued a strict stay-at-home order in mid-March that later was eased.

Critics say the broad statewide order unfairly lumps too many disparate counties together into regions.

The approach “places our ability to reopen with 10 other counties including Los Angeles County which has absolutely failed to control the coronavirus and Mono County whose most populous city is 344 miles away,” said Fred M. Whitaker, chairman of the Republican Party of Orange County.

The explosive rise in COVID-19 infections that began in October is being blamed largely on people ignoring safety measures and socializing with others.

Berkeley Health Officer Lisa Hernandez said people should not meet in person with anyone they don’t live with, “even in a small group, and even outdoors with precautions.”

“If you have a social bubble, it is now popped,” Hernandez said. “Do not let this be the last holiday with your family.”

Los Angeles County, the nation’s most populous with 10 million residents, could reach ICU capacity within days. Los Angeles Mayor Eric Garcetti said that could mean people with other life-threatening illnesses, such as strokes and heart attacks, might be unable to get a bed.

The city alone could see more than 11,000 lives lost to the virus by year’s end, the mayor said.

“That means 3,000 additional deaths in a single month. To put that in perspective, it’s a decade of homicides,” Garcetti said. “This is the greatest threat to life in Los Angeles that we have ever faced.”

In the inland Central Valley, Fresno County had just 10 of its 150 ICU beds available. Health officials described a grim picture with hospitals struggling to stay staffed because of coronavirus infections and exposures. One hospital is holding ICU patients in the emergency department until beds open up, Emergency Medical Services Director Daniel Lynch said Friday.

The county has requested help from the state with staffing for a couple of weeks. But so far only one or two additional workers have shown up at three local hospitals as the whole state struggles with staffing.

At Kaweah Delta medical center in Visalia, in Tulare County, there were 18 ICU beds available Friday but only the staff to handle four additional patients, said Keri Noeske, the chief nursing officer. Some 125 employees are out sick or quarantined because of COVID-19.