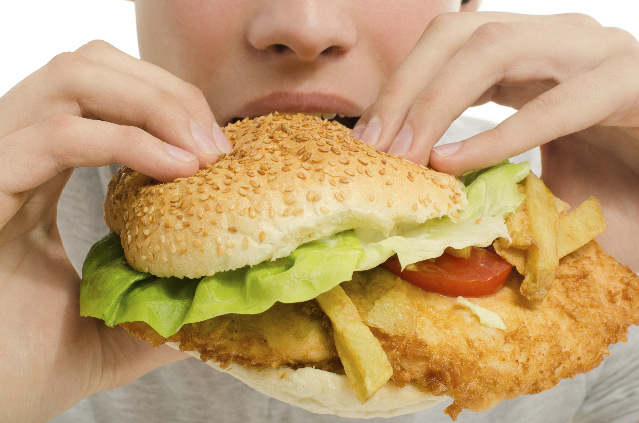 Do you crave junk food when you’re fighting with your spouse? That might be normal, according to a new study that says people in stressful marriages have “significantly higher” levels of the hormone that makes you hungry.

The study, conducted by researchers at the University of Delaware, studied the eating behaviors and hormone levels of 43 couples. The couples who experienced the most stress also had elevated levels of ghrelin, the hormone that signals hunger in the brain. The distressed couples were also likely to eat more calories, protein and sodium.

“Hostile couples had significantly higher amounts of the appetite-triggering hormone after arguments if they were at a healthy weight or in the overweight category,” a UD press release stated. “No such correlations were found with leptin, the appetite-suppressing hormone.”

The study also found the results were consistent for both males and females. However, researchers found that these findings were only true for normal or overweight couples, not obese couples.

“It didn’t matter for obese people if they were in a happy or not so happy marriage. They were having poor diet choices regardless of what was happening in their marriage,” the lead study author, Lisa Jaremka, told delawarepublic.org.

This is just one of many studies that connects stress to diet, but it’s the first to look at how marriages can affect stress and diet. Jaremka said this is important information to know when someone is looking to lose weight.

“Right now, it’s one-size-fits-all — diet and exercise,” she said in the UD press release. “I hope this will help us start to tailor interventions. These studies suggest people have difficulty controlling appetite and with specific types of foods. … A personalized approach would be beneficial in the long run.”

“Many patients respond to stress by adopting adverse coping strategies, like smoking or drinking or overeating,” she said. “That bag of chips might make you feel better in the short term, but over the long term it would be better to turn to something like exercise or meditation.”

The study was published in the journal Clinical Psychological Science and can be read in full on lisajremka.com.