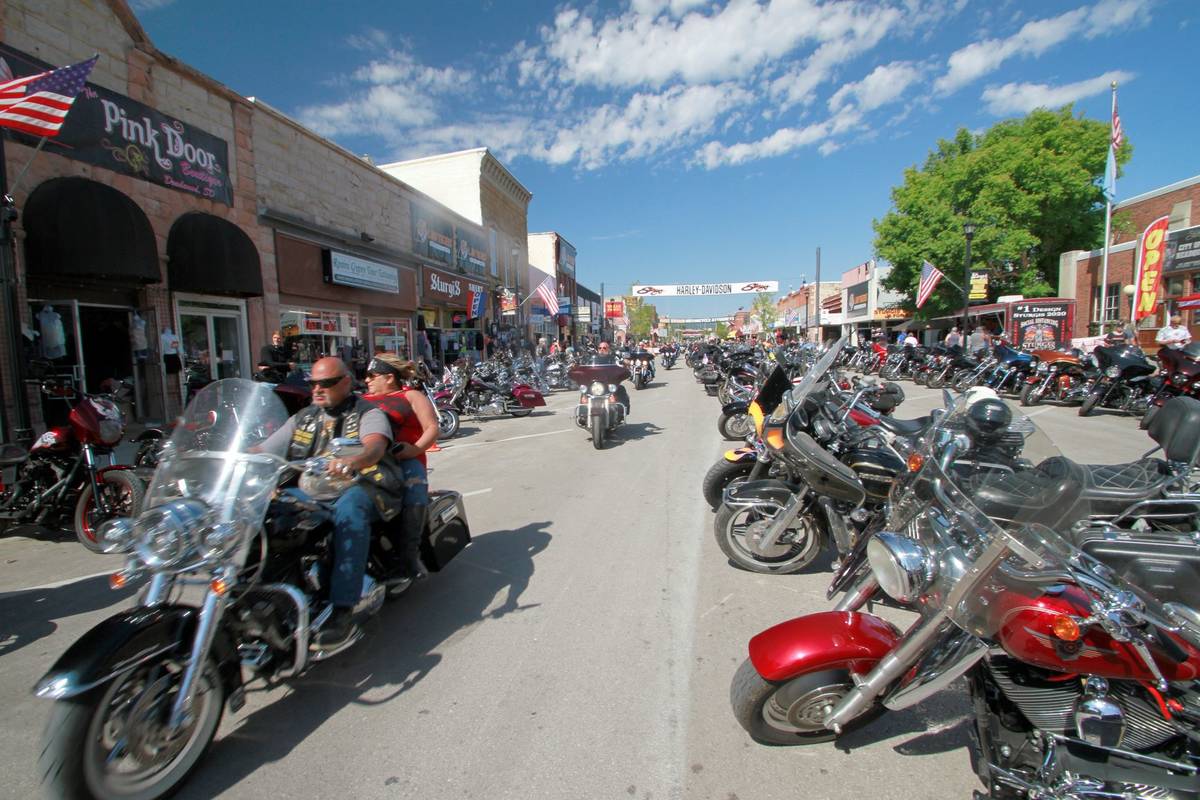 Thousands of bikers rode through the streets for the opening day of the 80th annual Sturgis Motorcycle rally Friday, Aug. 7, 2020, in Sturgis, S.D. (AP Photo/Stephen Groves)

STURGIS, S.D. — Thousands of bikers poured into the small South Dakota city of Sturgis on Friday as the 80th Sturgis Motorcycle Rally rumbled to life despite fears it could lead to a massive coronavirus outbreak.

The rally could become one of the largest public gatherings since the pandemic began, with organizers expecting 250,000 people from all over the country to make their way through Sturgis during the 10-day event. That would be roughly half the number of previous years, but local residents — and a few bikers — worry that the crowds could create a “super-spreader” event.

Many who rode their bikes into Sturgis on Friday expressed defiance at the rules and restrictions that have marked life in many locales during the pandemic. People rode from across the country to a state that offered a reprieve from coronavirus restrictions, as South Dakota has no special limits on indoor crowds, no mask mandates and a governor who is eager to welcome visitors and the money they bring.

“Screw COVID,” read the design on one T-shirt being hawked. “I went to Sturgis.”

Bikers rumbled past hundreds of tents filled with motorcycle gear, T-shirts and food. Harley Davidson motorcycles were everywhere but masks were almost nowhere to be seen, with an Associated Press reporter counting fewer than 10 in a crowd of thousands over a period of several hours.

‘Willing to take a chance’

For Stephen Sample, who rode his Harley from Arizona, the event was a break from the routine of the last several months, when he’s been mostly homebound or wearing a mask when he went to work as a surveyor.

Still, Sample, who is 66, feared what could happen if he caught COVID-19 at the rally. He said he was trying to avoid indoor bars and venues, where he felt the risk of infection was greater. But on the opening day of the rally, he said he ate breakfast at an indoor diner.

As Sample weighed the risks of navigating the crowds, the same thrill-seeking that attracted him to riding motorcycles seemed to win out.

“I think we’re all willing to take a chance,” he said.

Republican Gov. Kristi Noem has taken a largely hands-off approach to the pandemic, avoiding a mask mandate and preaching personal responsibility. She supported holding the Sturgis rally, pointing out that no virus outbreak was documented from the several thousand people who turned out to see President Donald Trump and fireworks at Mount Rushmore last month.

Daily virus cases have been trending upward in South Dakota, but the seven-day average is still only around 84, with fewer than two deaths per day.

Loving the life at the rally

The rally attracted crowds of retirees and people in age ranges considered to be at higher risk from the coronavirus. But for many who see the rally as an annual pilgrimage, the camaraderie and atmosphere couldn’t be missed.

“I fell in love with the rally. I love the sound of the bikes,” said Bill Sudkamp, who was making his 20th consecutive rally appearance.

He and his wife, who declined to give their ages but said they were at elevated risk for COVID-19, were among the handful of people seen wearing masks in downtown Sturgis, a community of about 7,000 that’s roughly 25 miles (40 kilometers) northwest of Rapid City. They were also planning to avoid bars. Sudkamp felt it was inevitable that infections would spread in the packed bars and concert venues.

“It looked like South Dakota was plateauing mostly,” Sudkamp said. “It will be interesting to see what it looks like in two weeks.”

Marsha Schmid, who owns the Side Hack Saloon in Sturgis, was trying to keep her bar and restaurant from becoming a virus hot spot by spacing out indoor tables and offering plenty of hand sanitizer. She also scaled back the number of bands hired for the rally, hoping the crowds would stay thin but still spend the cash that keeps her business viable for the rest of the year.

She pointed out that many of her employees depend on the rally and the tips they can make.

“You’ve got people coming from all over the world,” she said. “I just hope they are being responsible and if they don’t feel good, they stay away.”

Several locals said they would spend the rally hunkered down at home. Carol Fellner stocked up on groceries and planned to stay away from any gatherings. Her husband suffers from bouts of pneumonia and kidney problems, and COVID-19 would be a “death sentence” for him, she said.

Fellner felt that the risk of an outbreak would be felt long after the bikers leave. The city plans to mass test residents to try to detect and halt outbreaks, but the area’s largest hospital system is already burdened with the influx of tourists and bikers who inevitably need hospital care during this time.

Sample was aware his trip to the rally could end in the hospital, which seemed to weigh on him.

“This is a major experiment,” he said. “It could be a major mistake.”