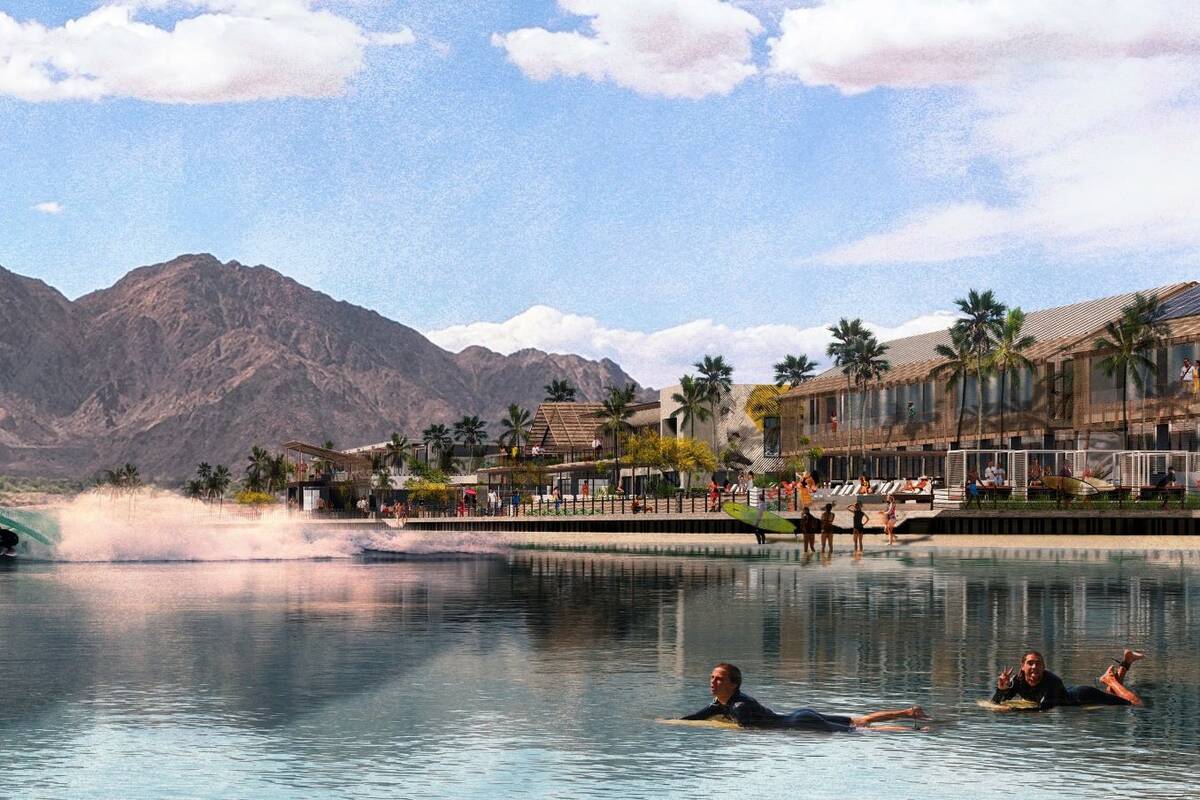 A rendering of a proposed Coral Mountain Resort with a large human-made surf lagoon that is proposed for the region around Palm Springs, Calif. (CCY Architects/REM Public Relations via AP) 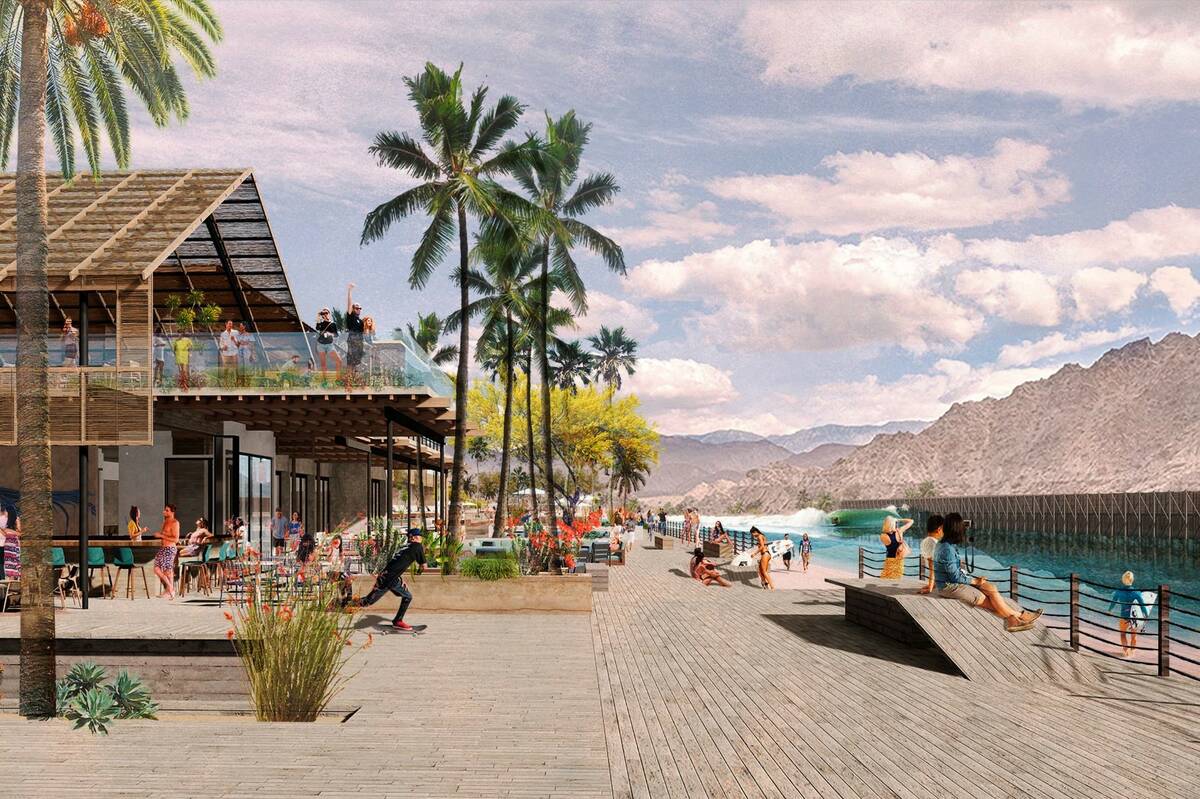 A rendering of a proposed Coral Mountain Resort with a large human-made surf lagoons that is proposed for the region around Palm Springs, Calif. (CCY Architects/REM Public Relations via AP)

Hours from the California coast, surfers are hoping one of the next spots where they can catch a wave is in the desert.

At least four large surf lagoons are proposed for the region around Palm Springs, which is more commonly known for art festivals, mountain hikes and golf, and has no natural waves in sight.

But some environmentalists and residents say it isn’t water-wise to build large resorts in one of the driest spots in California during one of its driest periods in recent memory. They contend water in the massive surf pools will evaporate quickly in the desert heat, wasting a precious resource, while proponents argue the waves will boost tourism, ramp up recreation and use less water than ever-popular golf courses.

“Is that their best use of the limited water resources in these climate-driven drought times, is golf courses and surf spots?” said Conner Everts, executive director of the Southern California Watershed Alliance. “It’s like a fantasy. It’s like Dubai.”

California is going through a relentless drought, worsened by climate change, and its nearly 40 million residents have faced repeated calls in recent years to conserve water. The greater Palm Springs area sits atop a groundwater aquifer but receives remarkably little rainfall and relies on water from the State Water Project, which is running below capacity, and the Colorado River, a critical U.S. water supplier that is overtaxed.

The proposals, which range from private, luxury communities to a public wave park, come as surfing soars in popularity in the United States. It became an Olympic sport last year, and industry experts forecast its continued growth as travel recovers following pandemic shutdowns and amid a rise in inland surf parks, according to San Jose-California-based Global Industry Analysts Inc.

Cheyne Magnusson, a pro surfer who is revamping a Palm Springs water park and adding a wave pool, is counting on that. He said the area is ideal because so many die-hard surfers live within driving distance and waves can be unreliable at the beach. It’s also a popular vacation spot, he said, and beginners might want to try surfing in a safe environment.

“A lot of people have a day off today, and they really want to go surfing. I can guarantee they are going to get a good wave, and they’re going to get a lot of them,” said Magnusson, who helped develop a wave park in landlocked Waco, Texas.

Magnusson’s project is under construction, and two others are approved. In nearby La Quinta, a proposed 400-acre development around a half-mile-long wave basin faces opposition from homeowners who moved to the area in search of a quiet retirement community.

They say the proposed Coral Mountain development will draw noisy surf festivals and ruin stargazing with its glaring lights. And they’re concerned the pool’s anticipated annual use of 120 acre-feet of water — in addition to the water used in the development’s 600 homes, hotel and retail outlets — will deplete community water supplies.

In 2016, one acre-foot was enough water for between three and four California households for a year, according to the nonprofit Water Education Foundation.

“With the evaporation and the wind and everything that is going to happen…,” said Alena Callimanis, a member of the group La Quinta Residents for Responsible Development, “the optics of this are just crazy.”

But John Gamlin, president of CM Wave Development, noted the wave basin will use eight to 10 times less water than a golf course, and golf course already has been approved for the site. He said many local backyard swimming pools use drinking water, but the basin will use non-potable water treated in an onsite filtration plant.

“At the end of the day we’re confident that the Coral Mountain project will be among the most responsible water users in the Valley,” Gamlin said in an email, adding that residential areas and open spaces, which account for most the project’s outdoor water use, will also use non-potable water.

The Coachella Valley Water District, which serves much of the region, said whether to build projects is up to local officials, but the water is there. While the groundwater basin’s storage hit a low in 2009, supplies have since improved through replenishment efforts and conservation, said Lorraine Garcia, a district spokesperson.

Critics, however, note the district has replenished the groundwater with imported water sources, and these are limited. State officials recently said water agencies will receive 5% of what they requested this year beyond what’s needed for critical activities such as drinking and bathing in what has been the driest start to a California year in at least a century.

The conditions come amid a tourism boom in greater Palm Springs, which became a travel destination over a century ago when residents sought out the hot, dry climate believing it was good for their health. In the past decade, more younger visitors have come for music and art festivals, said Scott White, president of Visit Greater Palm Springs. In the summer months, the temperature often exceeds 100 degrees Fahrenheit.

Desert resident and surfer Dave Hilts said he’d like to try out the wave pools for extra practice — though he’d still drive to the beach regularly to surf. He started the Coachella Valley Surf Club to give kids from low-income inland families a chance to surf and is working with a teacher who began a surf club at her desert high school.

“It is going to bring a lot of new people into surfing that could never surf before,” he said.

That growth, however, worries Ruth Langridge, a senior researcher at University of California, Santa Cruz focused on water law and policy. She said she’s long been wary of large-scale development in the desert because of the water demand — from pools or otherwise.

“You can fallow an agricultural area, but you can’t fallow a city once you build it,” Langridge said. “There’s a real concern about development in places where there isn’t going to be sufficient water.”