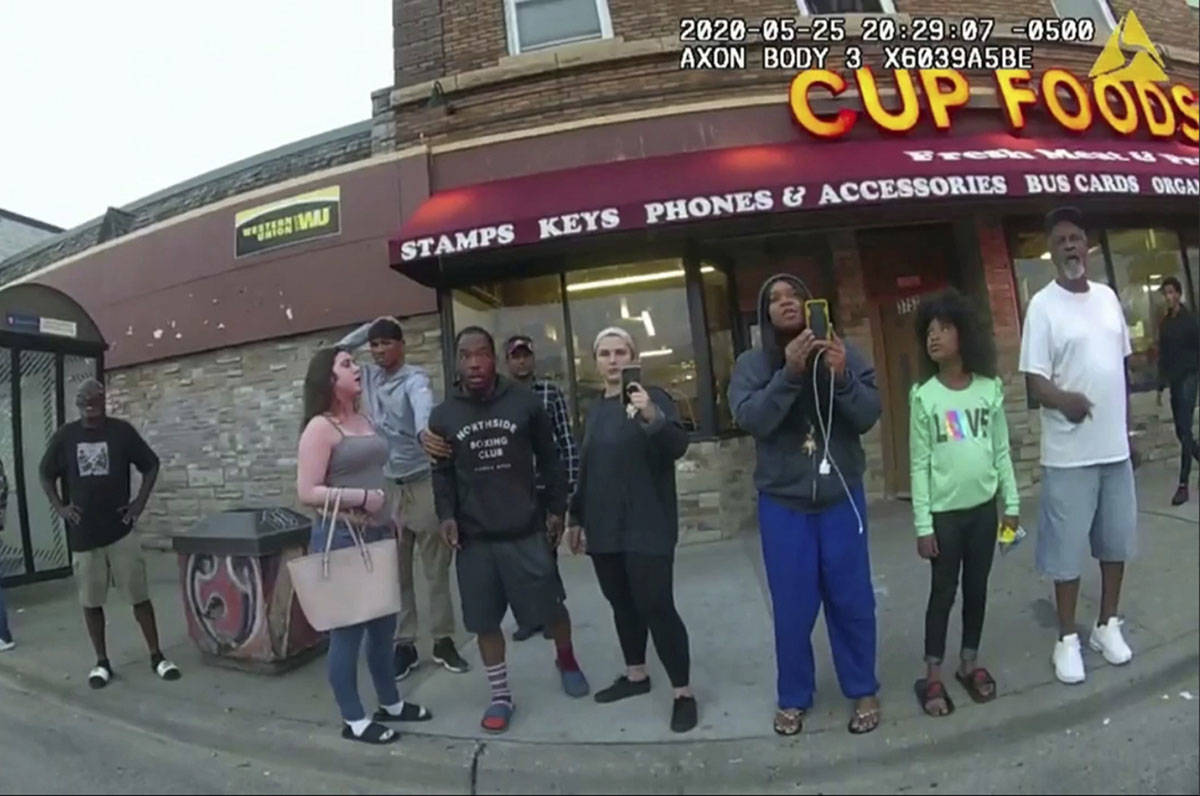 This May 25, 2020, file image from a police body camera shows bystanders including Darnella Frazier, third from right filming, as former Minneapolis police officer Derek Chauvin was recorded pressing his knee on George Floyd's neck for several minutes in Minneapolis. Frazier, the teenager who pulled out her cellphone and recorded the police restraint and death of Floyd has been awarded a special citation by the Pulitzer Prizes. The Pulitzer Prizes said Friday, June, 11, 2021, that Frazier was cited for courageously recording the video, which spurred protests against police brutality around the world. (Minneapolis Police Department via AP, File)

MINNEAPOLIS — The teenager who pulled out her cellphone and began recording when she saw George Floyd being pinned to the ground by a Minneapolis police officer was given a special citation by the Pulitzer Prizes on Friday for her video that helped to launch a global movement to protest racial injustice.

Darnella Frazier was cited “for courageously recording the murder of George Floyd, a video that spurred protests against police brutality, around the world, highlighting the crucial role of citizens in journalists’ quest for truth and justice,” the Pulitzer Prizes said.

Frazier was not giving interviews to the media, her publicist said Friday.

Frazier was 17 when she recorded the arrest and death of Floyd, a 46-year-old Black man, on May 25, 2020. She testified at the trial of former Minneapolis police officer Derek Chauvin that she was walking to a corner grocery store to get snacks with her then-9-year-old cousin when she saw a man being pinned to the pavement, “terrified, scared, begging for his life.”

She said she didn’t want her cousin to see what was happening so she ushered the girl into the store then went back out to the sidewalk and began recording because “it wasn’t right. He was suffering. He was in pain.” She kept recording even though she said she felt threatened when Chauvin ignored the cries of bystanders and pulled out his Mace as he knelt on Floyd’s neck for 9 minutes, 29 seconds.

Her video, which shows Floyd repeatedly saying he couldn’t breathe before going limp, was posted to Facebook hours after it was recorded, sparking outrage in Minneapolis and beyond. It was also a prominent piece of evidence in Chauvin’s trial. Chauvin was convicted in April of second-degree unintentional murder, third-degree murder and manslaughter. He will be sentenced June 25.

The Pulitzer Board also announced Friday that the Star Tribune of Minneapolis won the breaking news reporting prize for its coverage of Floyd’s murder and its aftermath.

Roy Peter Clark, a senior scholar at the Poynter Institute, said in a column for Nieman Lab last month that Frazier should win a Pulitzer for her video. Clark, who has been a Pulitzer juror five times, told The Associated Press on Friday that Frazier was like the many journalists or artists who have won Pulitzer Prizes for standing up for tolerance, equality and social justice.

“There she was, at 17, sort of witnessing an injustice and she stood there in the face of threats and captured that video,” he said, adding, “It would be hard to select, even from the work of professional journalists over recent years or decades, a 10-minute video that had as profound an impact as this young woman’s video did.”

Frazier’s video was “globe shaking,” spoke truth to power and gave a voice to the voiceless, Clark said.

It’s unusual but not unprecedented for the Pulitzer Board to award citizens who capture news events; the famous photo of a firefighter cradling an infant after the 1995 Oklahoma City bombing was taken by Charles Porter IV, a bank credit officer, and distributed by the AP.

Clark said the special citation that Frazier received recognizes exceptional work that falls outside specific award categories. The honor puts Frazier on a list with Ida B. Wells, Aretha Franklin, Bob Dylan, and the staff of the Capital Gazette in Annapolis, Maryland, for their response to a 2018 shooting in their newsroom.

Frazier was also given the PEN/Benenson Courage Award last year by PEN America, a literary and human rights organization.

PEN America CEO Suzanne Nossel said at the time: “With nothing more than a cellphone and sheer guts, Darnella changed the course of history in this country, sparking a bold movement demanding an end to systemic anti-Black racism and violence at the hands of police.”

During her testimony at Chauvin’s trial, Frazier told jurors that she sometimes wishes she had done more to help Floyd. She said she looks at her father and other Black men in her life and thinks about “how that could have been one of them.”

“It’s been nights I stayed up, apologizing and apologizing to George Floyd for not doing more, and not physically interacting and not saving his life,” she testified, adding of Chauvin: “But it’s like, it’s not what I should’ve done, it’s what he should’ve done.”

The three other officers involved in Floyd’s arrest are scheduled to face trial next year on aiding and abetting counts. All four officers are also charged with violating Floyd’s civil rights.