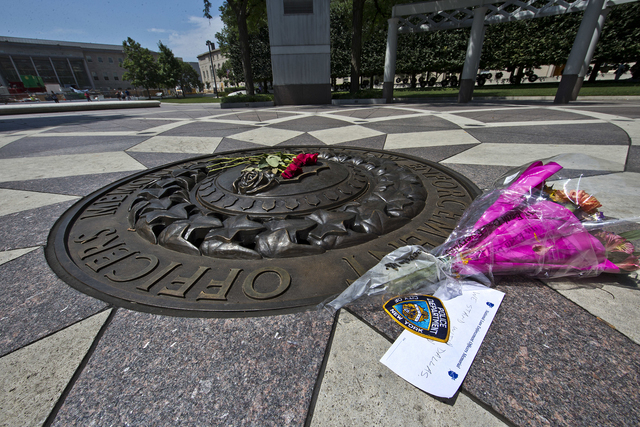 Five red roses on the bronze medallion with another bouquet of flowers and a note in support of the Dallas Police Department are seen at The National Law Enforcement Officers Memorial in Washington, Friday, July 8, 2016. Five law enforcement officers were killed in Dallas on Thursday. (Alex Brandon/Associated Press)

Over 90 percent of residents in the Bahamas are black, and Monday is a national holiday, when some travel north from the archipelago to vacation in the United States.

But following deadly police shootings this week of black men in Louisiana and Minnesota – and an ambush of white officers in Texas – the island nation on Friday advised its residents to be extra careful if they choose to do travel here.

The reason: “recent tensions in some American cities over shootings of young black males by police officers.”

It was the kind of advisory that the U.S. government has issued recently for travel under the repressive regime in Laos, or to the developing nation of Nicaragua: watch out for the security situation, and beware of street demonstrations, the State Department warned.

On Friday, however, those red flags were turned around on the United States.

The Bahamian Ministry of Foreign Affairs and Immigration urged its citizens to exercise “appropriate caution” when traveling to the United States, and especially to cities where recent police shootings have occurred.

“Do not get involved in political or other demonstrations under any circumstances and avoid crowds,” the government warned.

The Bahamian government specifically advised its young male citizens to take “extreme caution” with police. “Do not be confrontational and cooperate,” the government warned.

And it was the second summer in a row that foreign travelers have received such warnings. Amid riots following police shootings last year, France warned residents against travel to St. Louis, Cleveland and Baltimore.

Canada, Germany and others have in the past also warned their citizens about deadly gun violence when traveling to the United States, but none updated their travel warnings this week.

For its part, the U.S. has its own, albeit more narrow, advice for citizens heading to the Bahamas: don’t patronize “jet-ski rentals on New Providence or Paradise Islands,” the State Department warned this year. The industry is minimally regulated and crimes have occurred at sea.

In its advisory, the Bahamian government published a list of its U.S. consular office locations in case of problems:

“Pay attention to the public notices and news announcements in the city that you are visiting,” the advisory said. “Be safe, enjoy the holiday weekend and be sensible.”