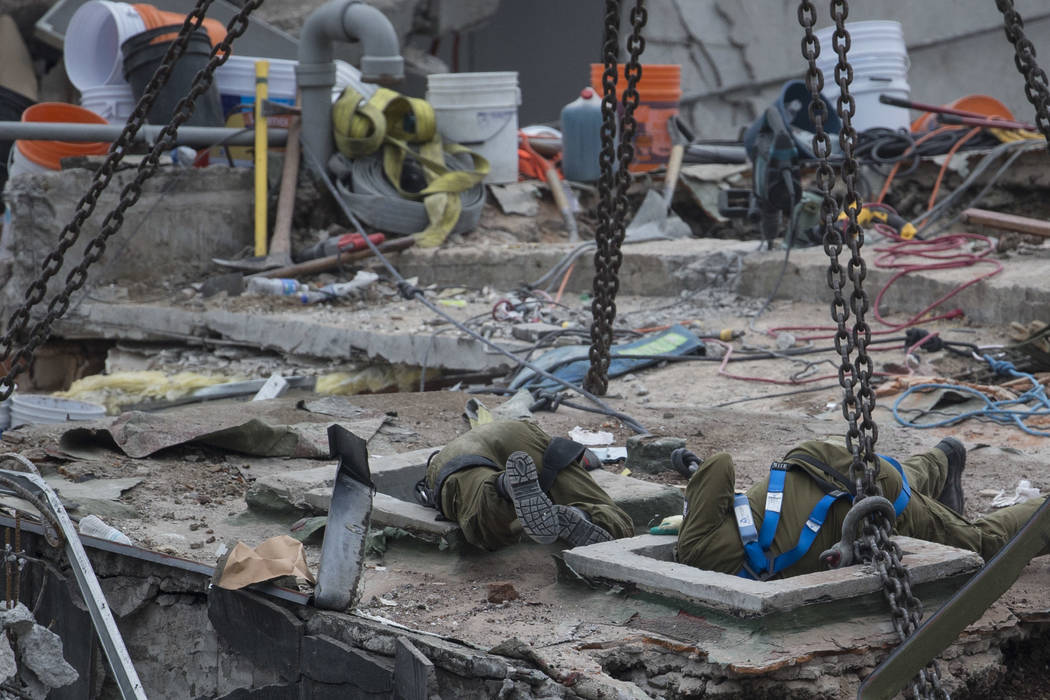 Israeli rescue workers help with search efforts at the site of a felled office building brought down by a 7.1-magnitude earthquake in the Roma Norte neighborhood of Mexico City, Saturday, Sept. 23, 2017. As rescue operations stretched into day 5, residents throughout the capital have held out hope that dozens still missing might be found alive. (Moises Castillo/AP) 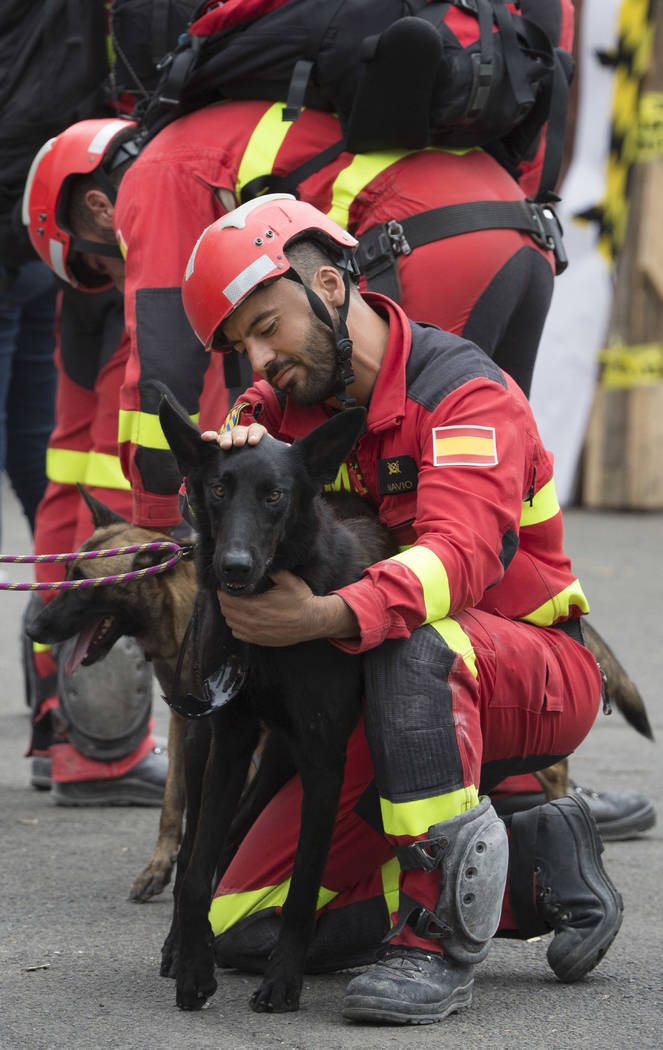 A rescue worker from Spain pets a search dog before they enter a felled office building to search for earthquake survivors in the Roma Norte neighborhood of Mexico City, Saturday, Sept. 23, 2017. (Moises Castillo/AP)

MEXICO CITY — As the search continues for survivors and the bodies of people who died in quake-collapsed buildings in Mexico City, thousands of people have been left homeless because their houses or apartment buildings are uninhabitable.

Specialists are fanning out to inspect buildings and determine which are unsafe after Tuesday’s magnitude 7.1 earthquake, which has killed at least 307, more than half of them in the capital.

Mayor Miguel Angel Mancera says 7,649 properties have been examined and 87 percent of those are safe and require only minor repairs. But that means about 1,000 left standing have been determined to be uninhabitable — and the number seems likely to rise as more are inspected.

Mancera also said Saturday night on Twitter that nearly 17,000 people have been “attended to” at 48 shelters.

A magnitude 6.2 aftershock that shook Mexico on Saturday was blamed for five deaths, spreading fear among anxious residents reeling from a string of natural disasters and interrupting the search for survivors from a bigger tremor earlier this week.

The Popocatepetl volcano south of Mexico City sent a column of ash into the sky, capping an intense period of seismic activity including two powerful tremors this month that have killed more than 400 people and caused damage of up to $8 billion.

And on Sunday, a magnitude 5.9 earthquake struck off the Mexican west coast, the Pacific Tsunami Warning Center said.

The epicenter of the quake was about 62 miles south-southwest of Tonala, in Chiapas state.

Hundreds of buildings across Mexico City are roped off with police tape, often with small piles of brick, stucco or glass that fell off their facades lying on the sidewalk in front.

Some could fall in coming weeks. Some could survive until the next earthquake, and then collapse with great loss of life.

Or some could just look a bit battered — scaring their owners and keeping inhabitants from returning home — even though they are, structurally speaking, healthy.

It is up to experts like architect Víctor Marquez, who thinks of himself as a building doctor, to bring peace of mind — or recommend aggressive treatment — to fearful apartment dwellers.

That’s what he was doing with 12 worried inhabitants of a seven-floor apartment building in Mexico City’s Roma neighborhood, whose swampy soil is known for heavy earthquake damage.

During Tuesday’s quake, large, frightening cracks had opened in zig-zag patterns in the building’s stairwell.

Marquez quickly found the problem: an incredibly thick coat of plaster that someone had applied over the decades, a layer so thick they had laid it in with wire matting.

Delicately, Marquez pried under a chunk of plaster with his fingers, to look at the brick wall behind it: it was uncracked and solid.

“Plaster is very scary, but it is a false symptom,” Marquez told them. “Architects can identify the silent enemy, the damage that isn’t as visible.”

The broken windows that shattered under the rocking and swaying of the quake could be fixed. The stairwell could be plastered. Minor damage to a low property-line wall could be patched.

The city said there were 3,848 reports of damaged buildings, though it was unclear if some were duplicate reports.

On Thursday and Friday, hundreds of young architects, engineers and architecture students crowded the offices of the city’s College of Architects, waiting to be assigned to assess damage r(asterisk)eports. If a building is deemed dangerous, the experts will notify city authorities, to encourage inhabitants to leave.

All this, in part organized by web platforms like Marquez’ “Save Your House” is being done free, and voluntarily.

Antonio Aldana, a 28-year-old architect, is one of the volunteers. After the quake, he first tried to volunteer as a rescuer, using a shovel to look for survivors. But collapse sites were quickly overwhelmed by the number of people wanting to volunteer, so Aldana decided to use his profession to help instead.

“In a situation of crisis like this, all professions are useful,” he said.