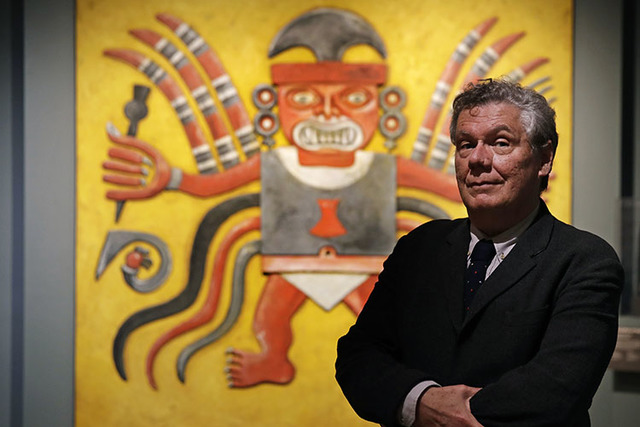 Jeffrey Quilter, director at the Peabody Museum of Archaeology & Ethnology, poses in front of reproduction of a Peruvian Decapitator God, at Harvard University. The Peabody, one of the oldest and largest museums in the world focused on the study of societies and cultures, turns 150 years old this month. (Charles Krupa/AP) 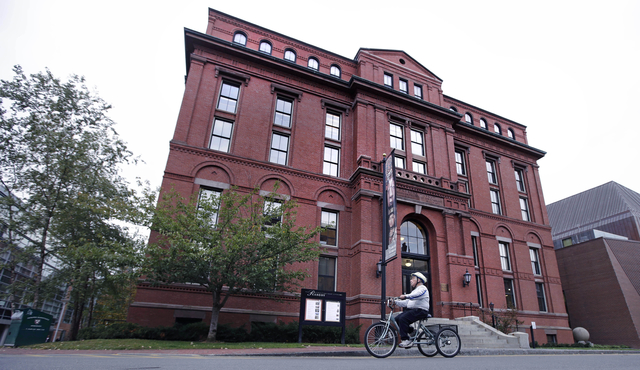 A cyclist earlier this month rolls past the Peabody Museum of Archaeology & Ethnology at Harvard University in Cambridge, Massachusetts. The Peabody, one of the oldest and largest museums in the world focused on the study of societies and cultures, turns 150 years old this month. (Charles Krupa/AP) 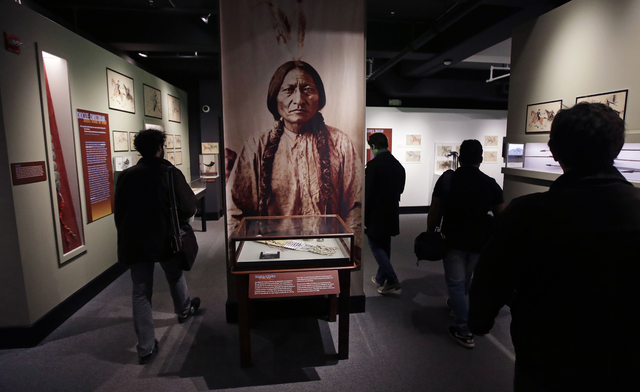 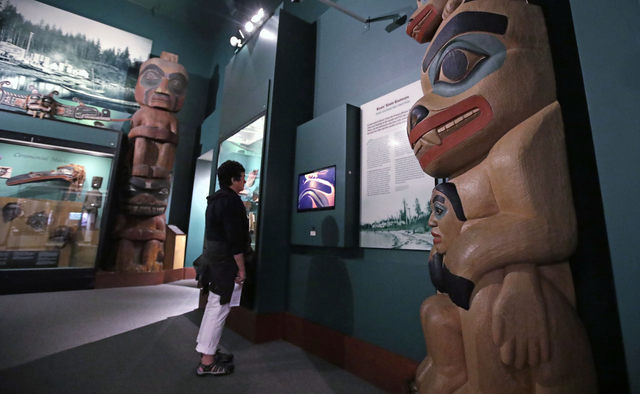 A visitor stands among totem poles as she watches a video as part of Hall of the North American Indian exhibit, at the Peabody Museum of Archaeology & Ethnology at Harvard University. (Charles Krupa/AP) 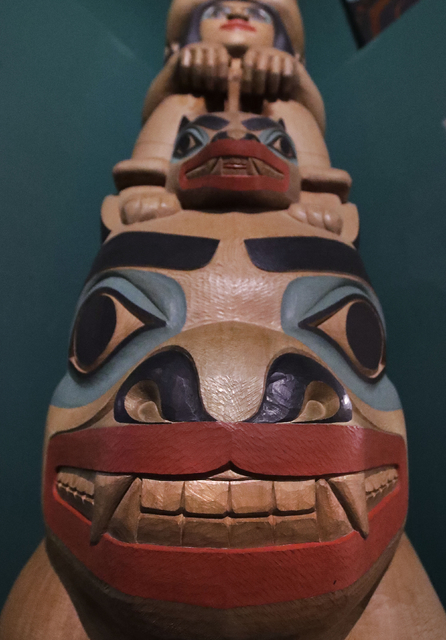 A totem pole is displayed as part of Hall of the North American Indian exhibit, at the Peabody Museum of Archaeology & Ethnology at Harvard University in Cambridge, Massachusetts. (Charles Krupa/AP)

CAMBRIDGE, Mass. — As one of the world’s oldest museums dedicated to anthropology turns 150, it’s undergoing some big changes to showcase its significant role in developing the discipline.

Leaders of the Peabody Museum of Archaeology and Ethnology at Harvard University hinted this month at changes to come when they trotted out — for one day only — some of its quirkier, rarely seen pieces as part of a birthday bash marking the day in 1866 when philanthropist George Peabody committed $150,000 to help found the museum.

Among the curiosities was a grizzly bear claw necklace from Meriwether Lewis and William Clark’s expedition to the Pacific coast and a grotesque, 19th century “mermaid” made of papier-mâché, wood and fish parts that showman P.T. Barnum once took on a national tour to fanfare.

The “FeeJee Mermaid” and other items long sitting in storage will find a permanent home in public view as part of a new exhibition exploring the Peabody’s role in anthropology, said Castle McLaughlin, a museum curator.

When it opens in April, “All the World is Here: Harvard’s Peabody Museum and the Invention of American Anthropology” will feature roughly 600 objects. Officials hope to show a greater range of the museum’s more than 1 million items, only a fraction of which are on display now.

“Harvard was very much in the business of developing anthropology,” said Jane Pickering, head of Harvard’s science and culture museums. “It’s a really interesting occasion to reflect on the Peabody and its role. Within its field, it’s incredible. The size and quality of its collection is truly astonishing.”

McLaughlin said the display will be the largest and perhaps most ambitious the museum has attempted, taking up an entire floor. The museum, which opened on Harvard’s campus in 1877, currently has two levels of exhibit space open.

The new exhibition will highlight curiosities collected by American ship captains that traveled to the Far East from the late 1700s to mid-1800s, of which the “Feejee Mermaid” is a prime example.

The museum’s many famed excavations — from the prehistoric earthwork in Ohio known as Great Serpent Mound to the Mayan ruins of Copan in western Honduras — will also be a focus, as will the museum’s role in the World’s Columbian Exposition of 1893.

The Peabody’s director at the time, Frederick Ward Putnam, played a leading role in planning the lavish fair, which took place in Chicago and celebrated the 400th anniversary of Christopher Columbus’ first voyage to the Americas. Putnam scoured the globe for unique artifacts and helped introduce the principles of anthropology to the wider public through the fair.

Jeffrey Quilter, the Peabody’s current director, said the World’s Columbian Exposition highlights the dual legacy of anthropology during those early decades of the profession.

On one hand, he said, it exposed more people to the diversity of world cultures. On the other, it inadvertently helped bolster advocates of colonialism and imperialism.

As the Peabody turns 150, Quilter said, the museum continues to play a vital role in navigating the complex cultures humans have created.

“We’re not just an anthropology museum. We’re interacting with so many other disciplines, from literature to political science to the study of ancient DNA,” he says. “These collections are never dead. They’re constantly being revitalized by people who come back with new ways to study them.”