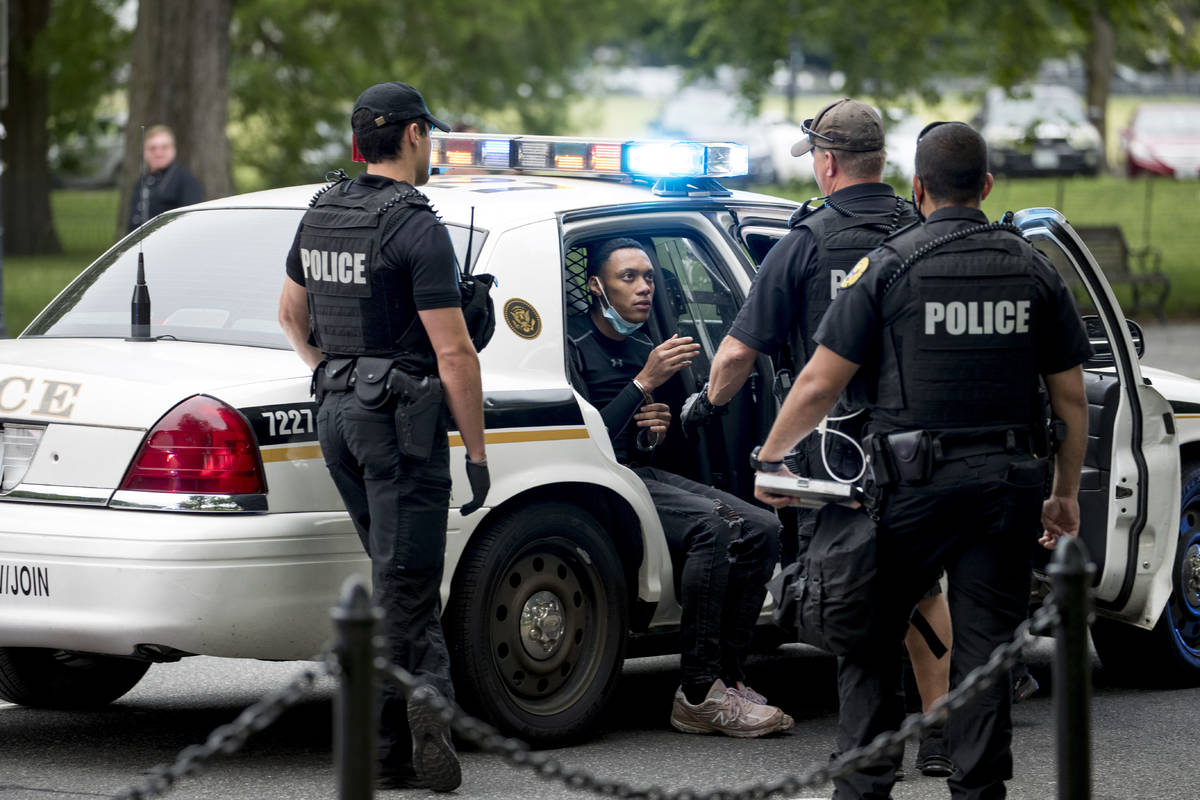 U.S. Secret Service police arrest a man for what one eye witness said an officer told him was for having an imitation gun along Constitution Avenue near the White House in the morning as protests continue over the death of George Floyd in Washington, Tuesday, June 2, 2020. Floyd died after being restrained by Minneapolis police officers. (AP Photo/Andrew Harnik) 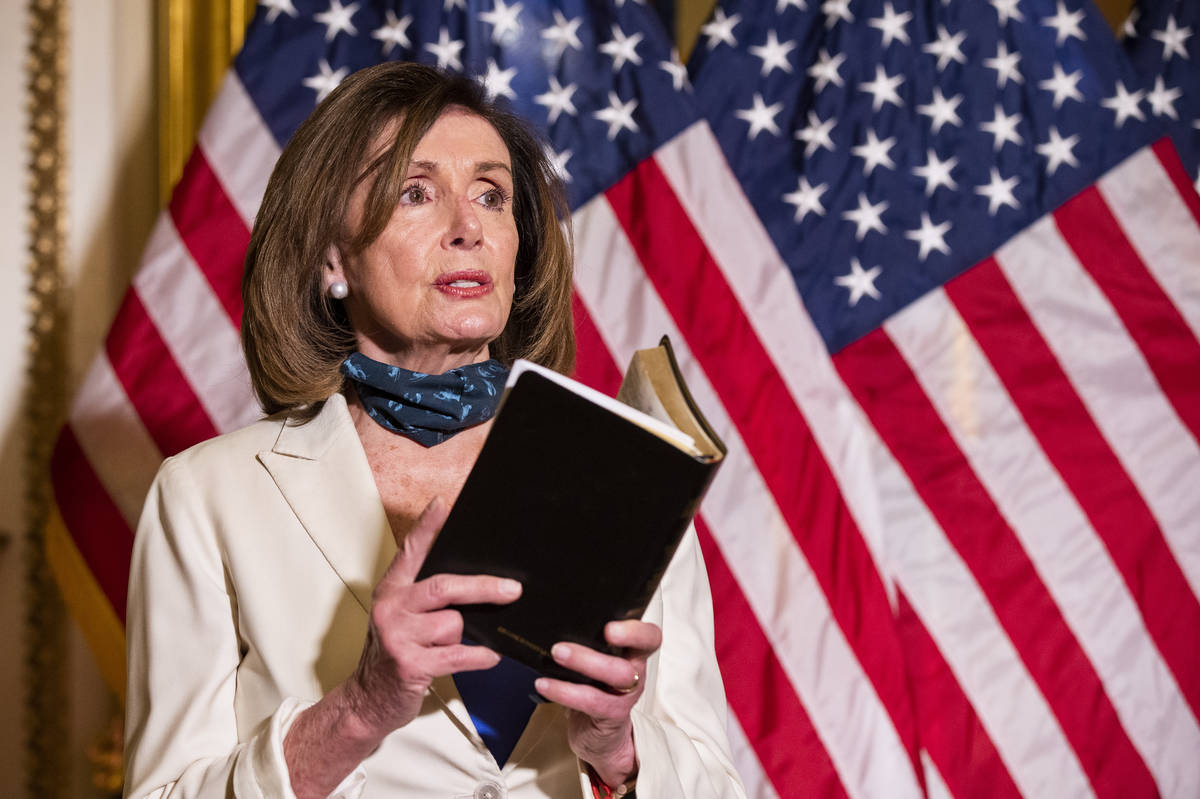 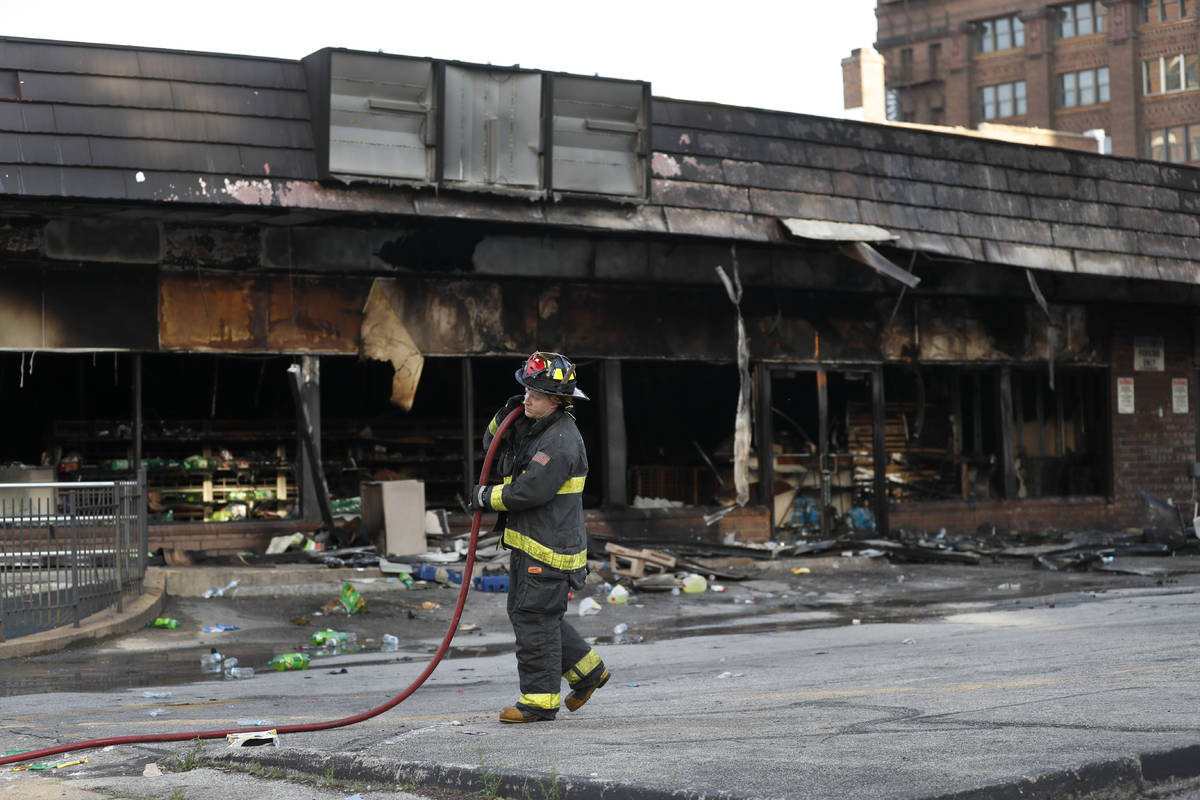 A member of the St. Louis Fire Department removes a hose outside a vandalized and burned convenience store Tuesday, June 2, 2020, in St. Louis. On Monday night people were seen removing items from the store before the building went up in flames and after a large peaceful protest against the death of George Floyd who died after being restrained by Minneapolis police officers on May 25 had ended. (AP Photo/Jeff Roberson) 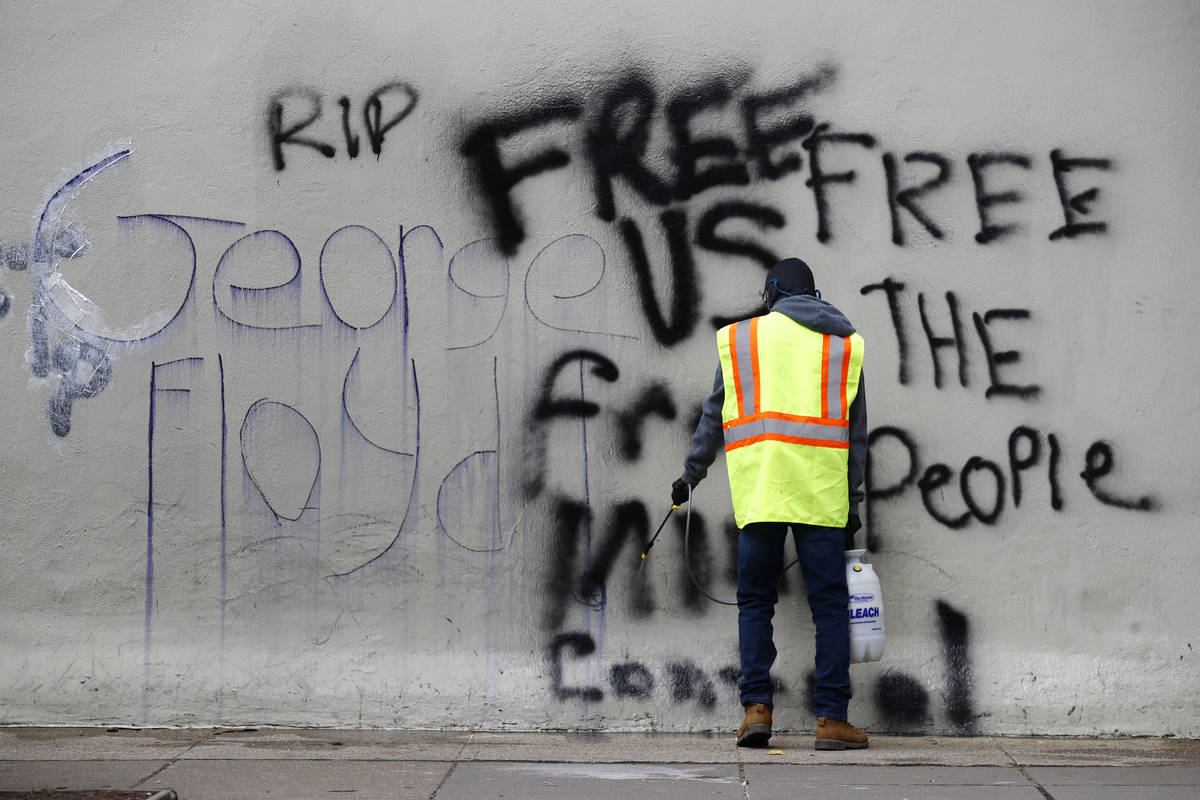 A worker removes graffiti from a building, Tuesday, June 2, 2020, in Washington, following protests over the death of George Floyd, who died after being restrained by Minneapolis police officers. (AP Photo/Patrick Semansky) 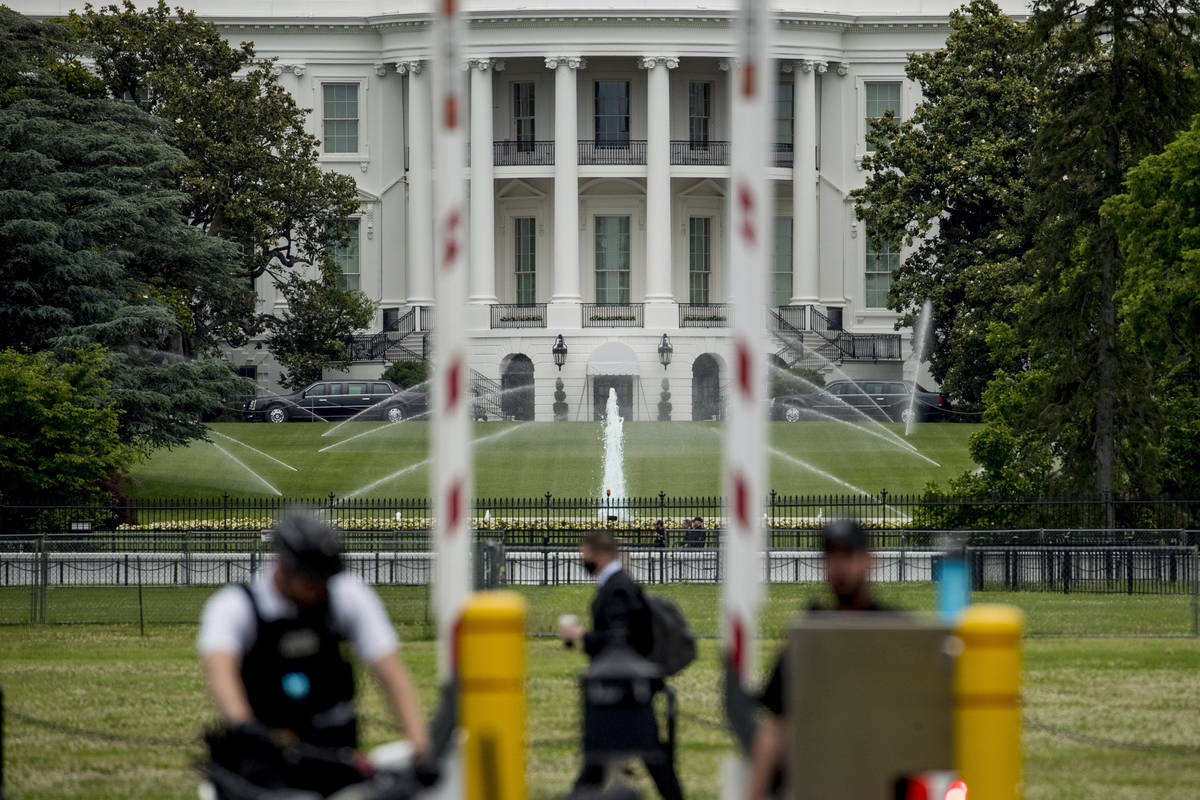 The White House is visible as uniformed Secret Service agents stand at a checkpoint on Constitution Avenue in the morning hours in Washington, Tuesday, June 2, 2020, as protests continue over the death of George Floyd. Floyd died after being restrained by Minneapolis police officers. (AP Photo/Andrew Harnik)

RICHMOND, Va. — Virginia Gov. Ralph Northam rejected a request from Secretary of Defense Mark Esper to send between 3,000 to 5,000 of the state’s national guard to Washington D.C. as part of a massive show of force organized by the Trump administration in response to violent protests, according to Northam’s chief of staff, Clark Mercer.

Mercer said Trump’s comments to governors in a phone call Monday, in which the president said most governors were “weak” and needed to “dominate” the streets, played a role in the decision.

“The president’s remarks to the governors heightened our concerns about how the guard would be used,” he said.

The streets around the White House complex were shut Tuesday morning, guarded by a mix of Secret Service officers and FBI agents.

Overnight, a fence was constructed around Lafayette Park and along 17th St at Pennsylvania Ave, two areas that have been focal points for protests.

Work crews were still at work boarding up businesses in the area and attempting to remove graffiti from federal buildings.

Minnesota’s attorney general says prosecutors are working as fast as they can to determine whether more charges will be filed against officers involved in the death of George Floyd, but they also have to work carefully and methodically.

Attorney General Keith Ellison was appointed lead prosecutor in the case Sunday. He told “Good Morning America” on Tuesday that those who have culpability will be held accountable.

Floyd, who was black, died May 25 after a white Minneapolis police officer pressed his knee against Floyd’s neck as Floyd said he couldn’t breathe and became motionless. Derek Chauvin has been charged with third-degree murder and second-degree manslaughter. But members of Floyd’s family and many others are calling for more serious charges, as well as charges against the three other officers who were there.

Ellison says despite the widely viewed bystander video of Floyd’s final moments, cases against police are hard. He pointed to the deaths of Freddie Gray and Philando Castile, and the beating of Rodney King, as examples of cases where striking video of an incident did not lead to convictions of officers.

Ellison did not give a timeline for any new charges. All four officers have been fired.

New York’s mayor extended an 8 p.m. curfew all week in hopes of stopping destruction that continued overnight despite the city’s efforts to stop protests over George Floyd’s death from devolving into lawless mayhem.

“We’re going to have a tough few days. We’re going to beat it back,” Mayor Bill de Blasio said at a news conference Tuesday as he announced that an 8 p.m.-to-5 a.m. curfew would hold through Sunday.

The plan came after a night when chaos broke out in midtown Manhattan and the Bronx.

On Monday, an 11 p.m. curfew — the city’s first in decades — failed to prevent destruction as groups of people smashed their way into shops, including Macy’s flagship Manhattan store.

Police said nearly 700 people were arrested and several officers were injured during the chaos Monday night and early Tuesday.

Six Atlanta police officers have been charged after a dramatic video showed authorities pulling two young people from a car during protests over the death of George Floyd, a prosecutor said Tuesday.

“I feel a little safer now that these monsters are off the street and no longer able to terrorize anyone else,” said Messiah Young, who was dragged from the vehicle along with his girlfriend, Taniyah Pilgrim, while they were caught in traffic.

The Saturday night incident first gained attention from video online and on local news. Throughout, the couple can be heard screaming and asking officers what is happening.

The U.S. Census Bureau says it has temporarily closed offices in several cities as a precaution as cities grapple with unrest following the death of George Floyd.

The Bureau would not say Monday which offices have been closed. A spokeswoman says in an email that the closures were done out of an abundance of caution.

The Census Bureau is in the middle of the 2020 census, which is attempting to count every resident in the U.S.

Census Bureau offices around the country were closed for a month and a half as field operations were suspended in March to stop the spread of the coronavirus. The offices only began reopening on a rolling basis in the past several weeks.

Kansas Gov. Laura Kelly says that bringing the military “into this contentious moment” would do more harm than good.

Kelly on Monday expressed sympathy for George Floyd’s family, families of other people killed by police and people outraged by Floyd’s “tragic murder.” She promised to work to address systemic racism.

“We need our leaders — myself included — to listen to those who felt their only means of being heard was to take to the street in protest,” Kelly said after President Donald Trump threatened to deploy the military to states if they did not stamp out violent protests.

“We need action to change the systemic inequalities we have ignored for far too long. We need to stop with the divisive language and instead, come together and do what’s right for our state,” Kelly added.

She noted that Kansas protests have been peaceful and promised to work closely with local officials to ensure public safety.

A man in the nation’s capital said he sheltered about 70 protesters in his home all night after they got caught between police lines after curfew.

Rahul Dubey told WJLA-TV he was sitting on his porch around 8:30 p.m. last night when law enforcement officers began corralling protesters on his street. He let some sit with him, and helped others out through his back alley, but the situation then escalated when officers started pushing protesters to the ground and releasing pepper spray, creating a “human tsunami” into his home.

Officers also released pepper-spray through the window after he closed the door, Dubey told WJLA-TV. The protesters inside the home screamed, and started pouring water and milk into their eyes in a scene he described as “pure mayhem.”

One officer came to the door to ask for a piece of the pizza that was delivered to the house overnight as Dubey was on the phone with the TV station, WJLA reported. The protesters left the home after 6 a.m. Tuesday when the district’s curfew ended.

Police in St. Louis say officers in a marked police car were fired on early Tuesday from a car occupied by suspected looters.

The incident led to a chase that ended in the suburb of Jennings, where one of the suspects was shot. Police said the incident was separate from a shooting around midnight Monday in which four St. Louis officers were shot and injured.

The Jennings shooting began when officers in a marked police car on the north side of St. Louis who were searching for looting suspects were fired on from men inside a car, police said. That led to a chase that ended in Jennings, just north of St. Louis, when the three suspects bailed out of the car, and one was shot by a St. Louis County officer, police said.

One man, identified only as 21 years old, was taken to a hospital with life-threatening injuries. Police said another man who had been in the car was arrested, and a third escaped.

No officers were injured in the Jennings shooting.

Family members of George Floyd are expected to attend a memorial service in his honor Thursday in Minneapolis.

The Rev. Al Sharpton is to deliver the eulogy at the service on the campus of North Central University.

The civil rights organization Sharpton founded, National Action Network, organized the memorial. The family’s attorney, Ben Crump, is also expected to make remarks at the service from 1 p.m. to 3 p.m.

A Minneapolis police officer was charged last week with third-degree murder in Floyd’s death May 25, and three other officers were fired. Bystander video showed the white officer, Derek Chauvin, holding his knee on the neck of the black man while he pleaded for air with his hands handcuffed behind him.

Washington, D.C., Mayor Muriel Bowser said on CNN on Tuesday it’s inappropriate for the military to be used for police work on U.S. streets.

“We don’t think that the active duty military should be used on American streets against Americans,” he said.

At least 65 people were arrested at Minnesota’s Capitol in St. Paul Monday night for violating a curfew, police said. They gathered peacefully on the Capitol grounds following a march down a St. Paul street.

Thousands had gathered earlier in the day at the governor’s mansion to demand the arrest and prosecution of all four former police officers involved in the death of George Floyd.

In Minneapolis, at the site of Floyd’s fatal encounter with police that has become a memorial, the crowd grew slightly agitated awaiting the arrival of police, but there was no widespread property damage.