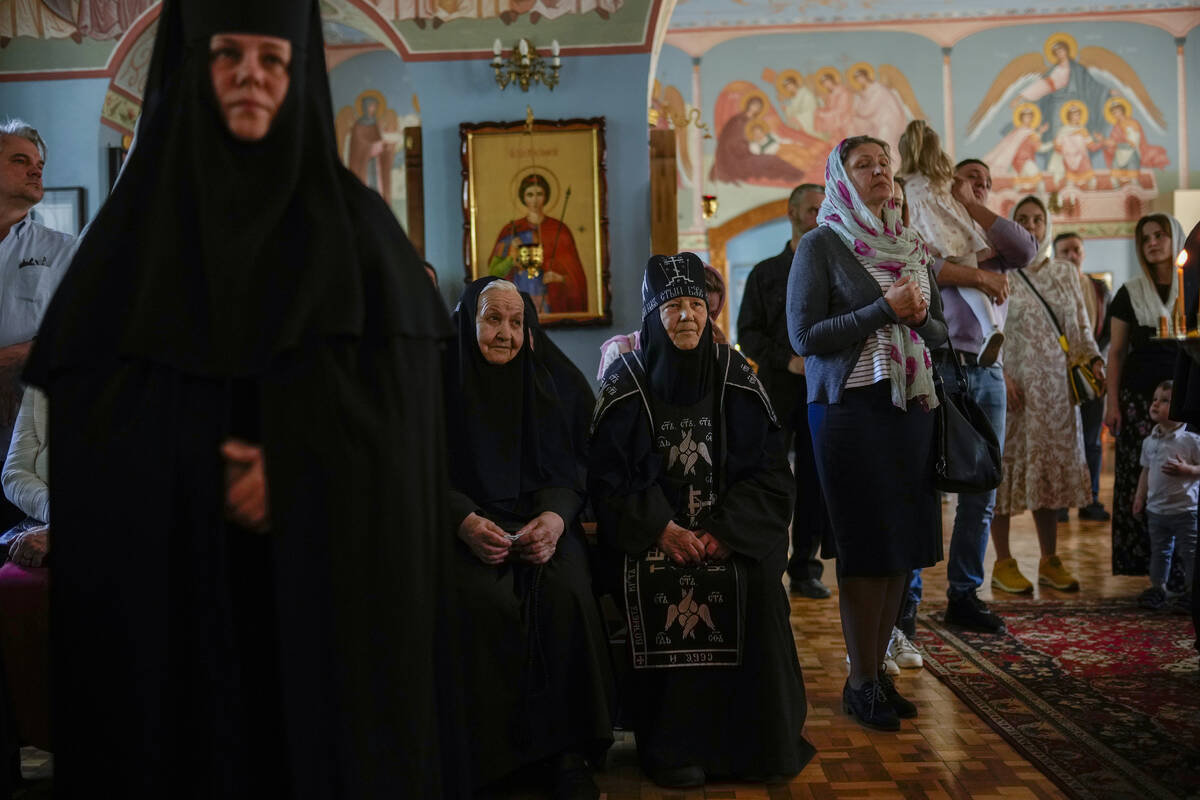 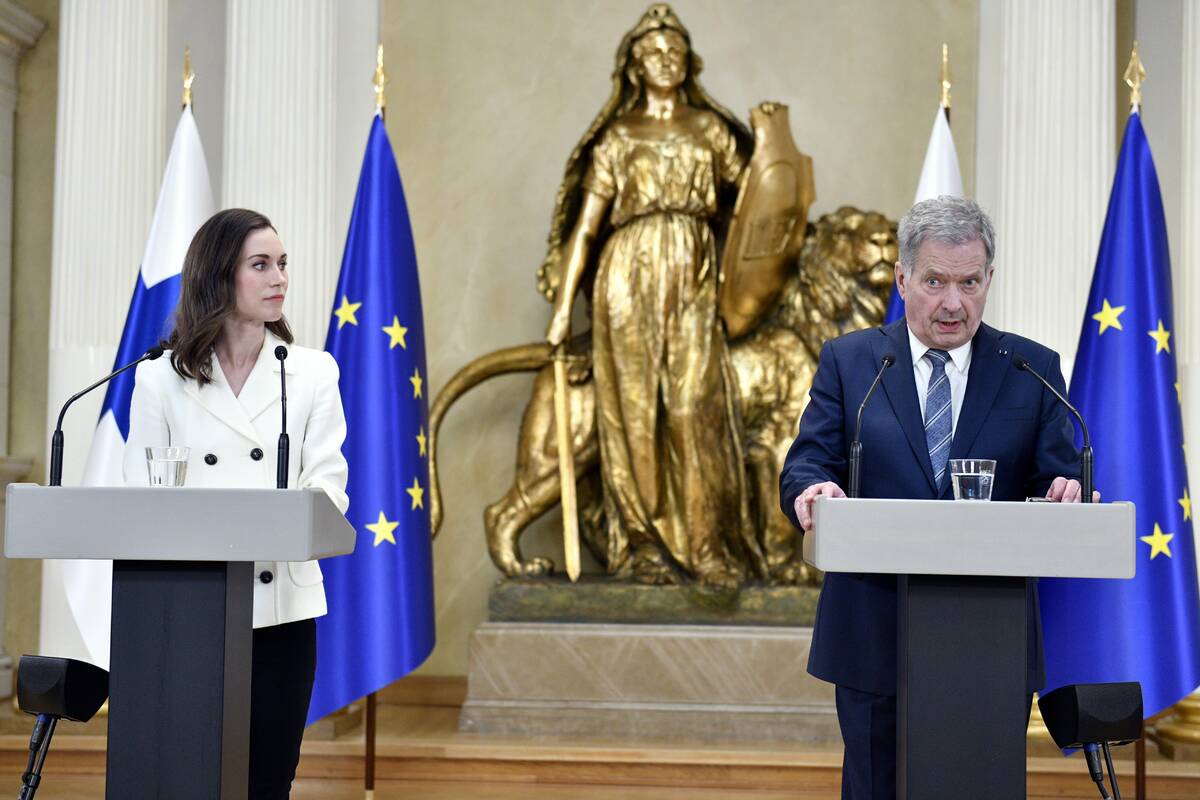 Finland's President Sauli Niinisto attends the press conference on Finland's security policy decisions at the Presidential Palace in Helsinki, Finland, Sunday May 15, 2022. Finland’s president and government have announced that the Nordic country intends to apply for membership in NATO, paving the way for the 30-member Western military alliance to expand amid Russia’s war in Ukraine. (Heikki Saukkomaa/Lehtiuva via AP) 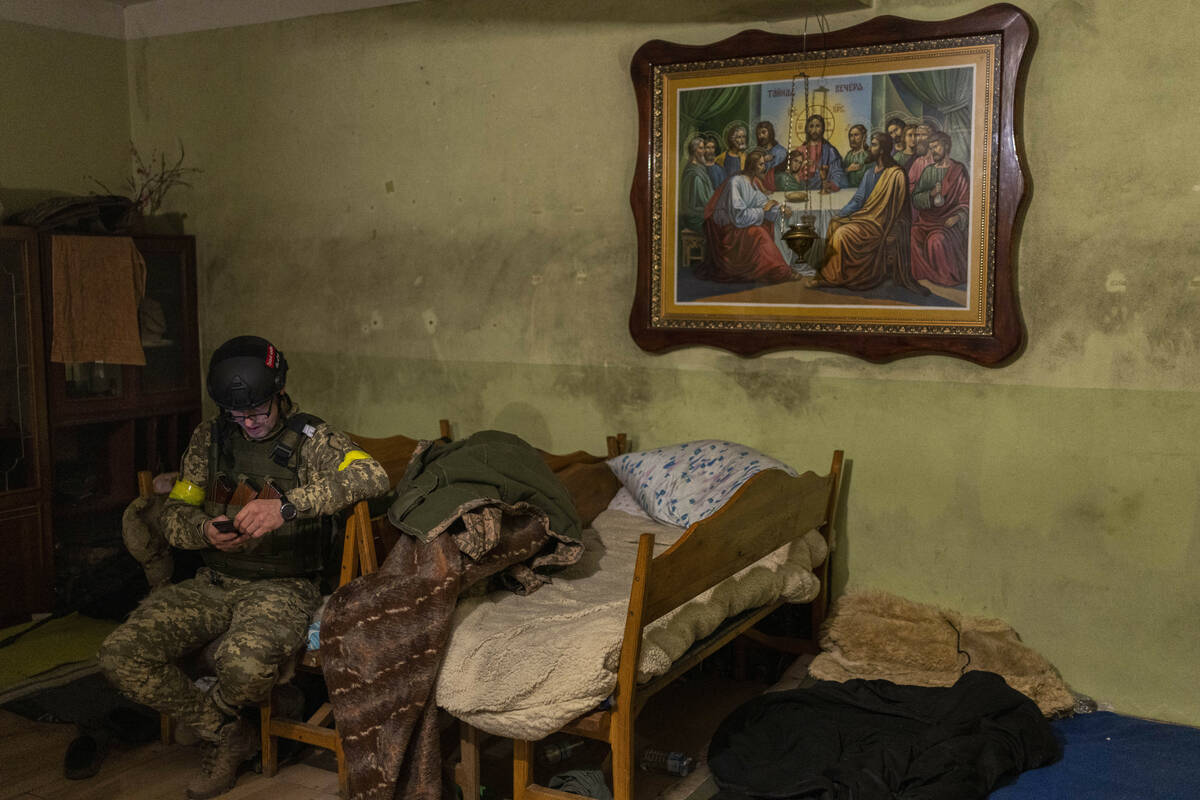 A Ukrainian National Guard soldier takes a break in a house used as temporary base in a recently retaken village on the outskirts of Kharkiv, east Ukraine, Saturday, May 14, 2022. (AP Photo/Bernat Armangue) 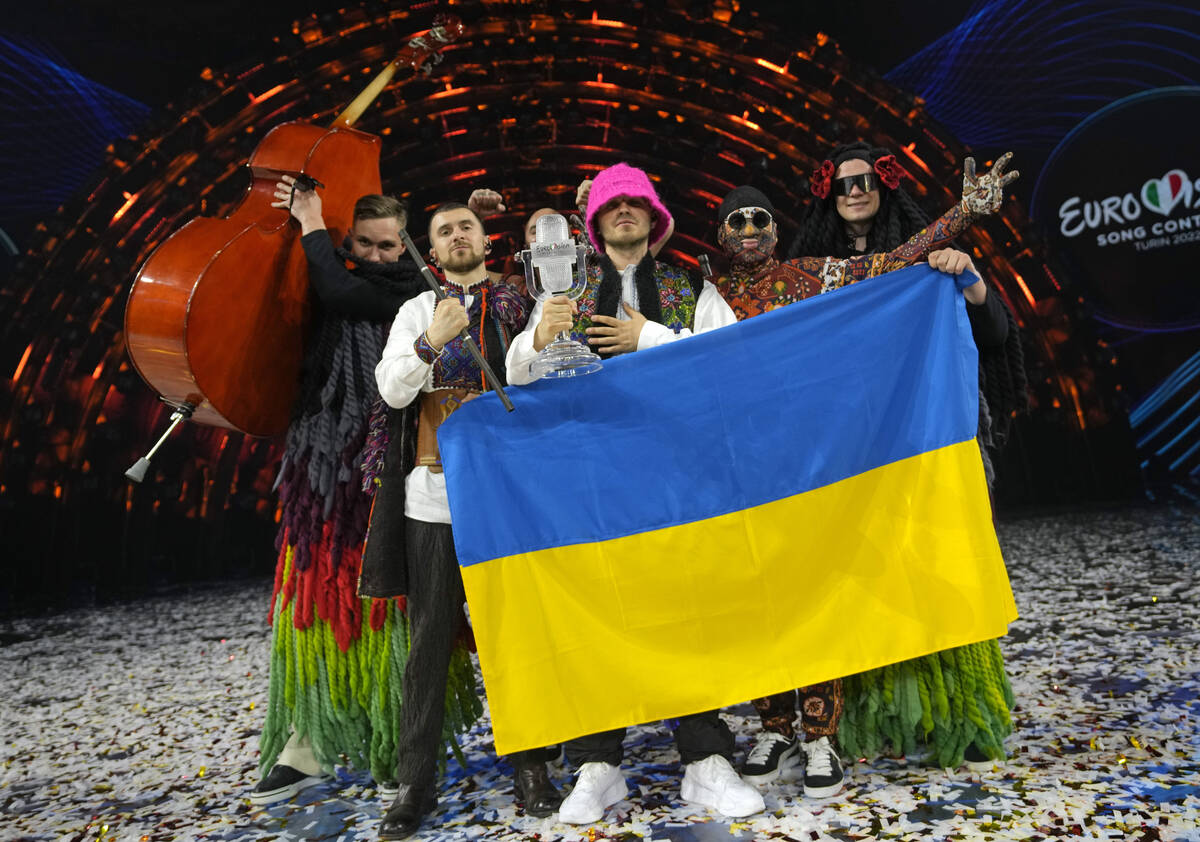 Members of the Kalush Orchestra from Ukraine celebrate after winning the Grand Final of the Eurovision Song Contest at Palaolimpico arena, in Turin, Italy, Saturday, May 14, 2022. (AP Photo/Luca Bruno) 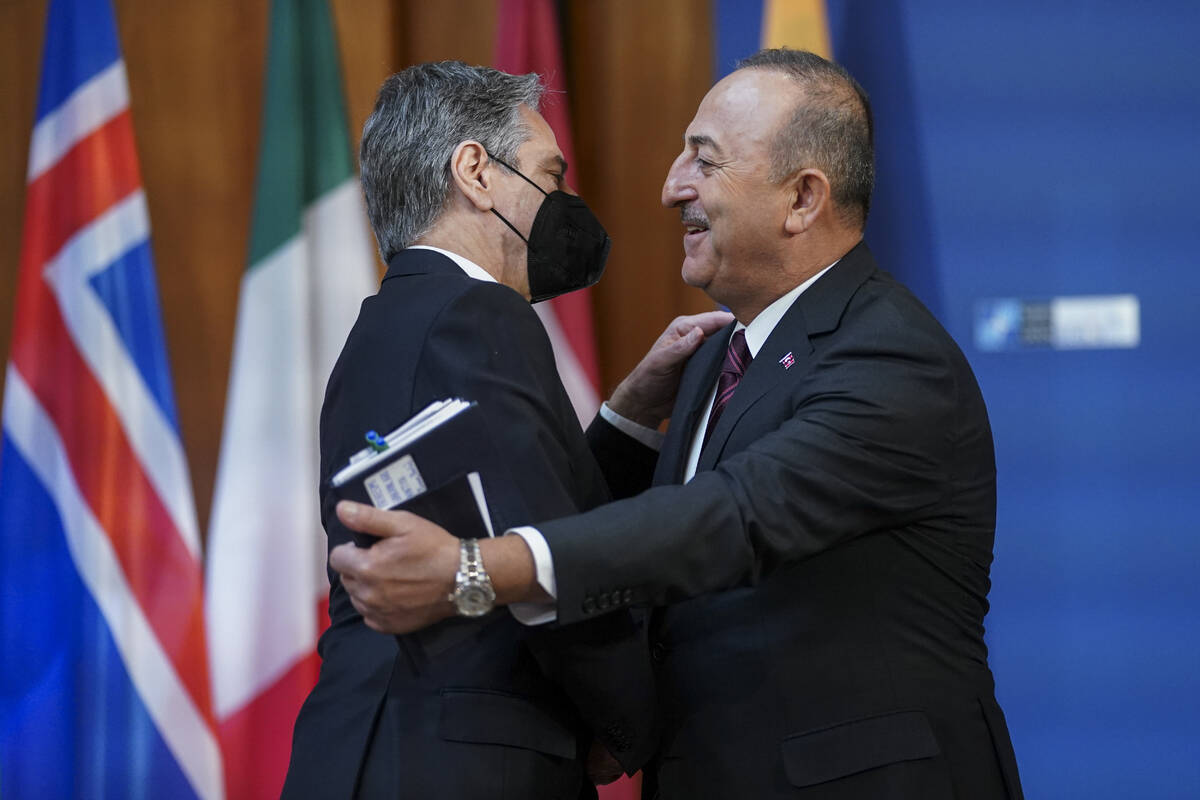 KYIV, Ukraine (AP) — Almost three months after Russia shocked the world by invading Ukraine, its military faces a bogged-down war, the prospect of a bigger NATO and an opponent buoyed Sunday by wins on and off the battlefield.

Top diplomats from NATO met in Berlin with the alliance’s chief and declared that the war “is not going as Moscow had planned.”

“Ukraine can win this war,” NATO Secretary-General Jens Stoltenberg said, adding that the alliance must continue to offer military support to Kyiv. He spoke by video link to the meeting as he recovers from a COVID-19 infection.

On the diplomatic front, both Finland and Sweden took steps bringing them closer to NATO membership despite Russian objections. Finland announced Sunday that it was seeking to join NATO, citing how the invasion had changed Europe’s security landscape. Several hours later, Sweden’s governing party endorsed the country’s own bid for membership, which could lead to an application in days.

If the two nonaligned Nordic nations become part of the alliance, it would represent an affront to Russian President Vladimir Putin, who has cited NATO’s post-Cold War expansion in Eastern Europe as a threat to Russia. NATO says it is a purely defensive alliance.

Ukraine said it held off Russian offensives Sunday in the east, and Western military officials said the campaign Moscow launched there after its forces failed to seize the capital of Kyiv has slowed to a snail’s pace.

Ukraine, meanwhile, celebrated a morale-boosting victory in the Eurovision Song Contest. The folk-rap ensemble Kalush Orchestra won the glitzy pan-European competition with its song “Stefania,” which has become a popular anthem among Ukrainians during the war.

President Volodymyr Zelenskyy vowed that his nation would claim the customary winner’s honor of hosting the next annual competition.

“Step by step, we are forcing the occupiers to leave the Ukrainian land,” Zelenskyy said.

Russian and Ukrainian fighters are engaged in a grinding battle for the country’s eastern industrial heartland, the Donbas. Ukraine’s most experienced and best-equipped soldiers are based in eastern Ukraine, where they have fought Moscow-backed separatists for eight years.

Even with its setbacks, Russia continues to inflict death and destruction across Ukraine. Over the weekend, its forces hit a chemical plant and 11 high-rise buildings in Siverodonetsk, in the Luhansk area of the Donbas, the regional governor said. Gov. Serhii Haidaii said two people were killed in the shelling and warned residents still in the city to stay in underground shelters.

Russian troops also were preparing for another attempt to cross the strategically important Siverskiy Donets River, two days after Moscow suffered heavy losses in a Ukrainian attack that destroyed a pontoon bridge, the governor said.

Russia also continued striking railways, factories and other infrastructure across Ukraine. Russian missiles destroyed “military infrastructure facilities” in the Yavoriv district of western Ukraine, near the border with Poland, the governor of the Lviv region said.

Lviv is a major gateway for the Western-supplied weapons Ukraine has acquired during the war.

The Ukrainian military said it held off a renewed Russian offensive in the Dontesk area of the Donbas. Russian troops also tried to advance near the eastern city of Izyum, but Ukrainian forces stopped them, the governor of Ukraine’s Kharkiv region, Oleh Sinegubov, reported.

The Ukrainian claims could not be independently verified, but Western officials also painted a somber picture for Russia.

Britain’s Defense Ministry said in its daily intelligence update Sunday that the Russian army had lost up to one-third of the combat strength it committed to Ukraine in late February and was failing to gain any substantial territory.

“Under the current conditions, Russia is unlikely to dramatically accelerate its rate of advance over the next 30 days,” the ministry said on Twitter.

The assessments of Russia’s war performance came as Russian troops retreated from around Kharkiv, Ukraine’s second-largest city, which was a key military objective earlier in the war and was bombarded for weeks. The regional governor said there had been no shelling in the city for several days, though Russia continued to strike the wider Kharkiv region.

After failing to capture Kyiv, Putin shifted the invasion’s focus to the Donbas, aiming to seize territory not already occupied by the Moscow-backed separatists.

Airstrikes and artillery barrages make it extremely dangerous for journalists to move around in the east, hindering efforts to get a full picture of the fighting. But it appeared to be a back-and-forth slog without major breakthroughs on either side.

In the southern Donbas, the Azov Sea port of Mariupol is now largely under Russian control, except for a few hundred Ukrainian troops who have refused to surrender and remain holed up in the Azovstal steel factory.

Many of their wives called on the global community Sunday to secure the release of “the entire garrison,” during an online news conference. The women painted a grim picture of the troops’ situation, saying they suffered severe food, water and medicine shortages; untreated injuries were sometimes leading to sepsis.

The Ukrainian prosecutor-general’s office said regional prosecutors have launched a criminal investigation into Moscow’s alleged use of restricted incendiary bombs at the steelworks. While international law recognizes legal uses of phosphorus and other incendiary munitions on the battlefield, it bars their use to directly target enemy personnel or civilians.

The invasion of Ukraine has other countries along Russia’s flank worried they could be next, including Finland, which shares both a 1,340-kilometer (830-mile) land border and the Gulf of Finland with Russia. Putin told Finnish President Sauli Niinisto in a Saturday phone call that joining NATO would be an “error.”

In neighboring Sweden, after the ruling Social Democratic Party on Sunday backed plans to join NATO, the plan was to be discussed Monday in parliament, with an announcement by the Cabinet to follow.

However, NATO operates by consensus, and the Nordic nations’ potential bids were thrown into question over concerns from Turkey. Turkish Foreign Minister Mevlut Cavusoglu said he had discussed Turkey’s concerns at Sunday’s NATO meeting, especially Sweden and Finland’s alleged support for Kurdish rebel groups and their restrictions on weapons sales to Turkey.

But during a Sunday visit to Sweden, Senate Republican leader Mitch McConnell said Finland and Sweden would be “important additions” to NATO and that the U.S. should swiftly ratify their membership. McConnell is leading a delegation of GOP senators to the region. They made a surprise visit to Kyiv on Saturday in a show of support.

McQuillan reported from Lviv. Yuras Karmanau in Lviv, Mstyslav Chernov and Andrea Rosa in Kharkiv, Elena Becatoros in Odesa and other AP staffers around the world contributed to this report.

Follow AP’s coverage of the war in Ukraine: https://apnews.com/hub/russia-ukraine