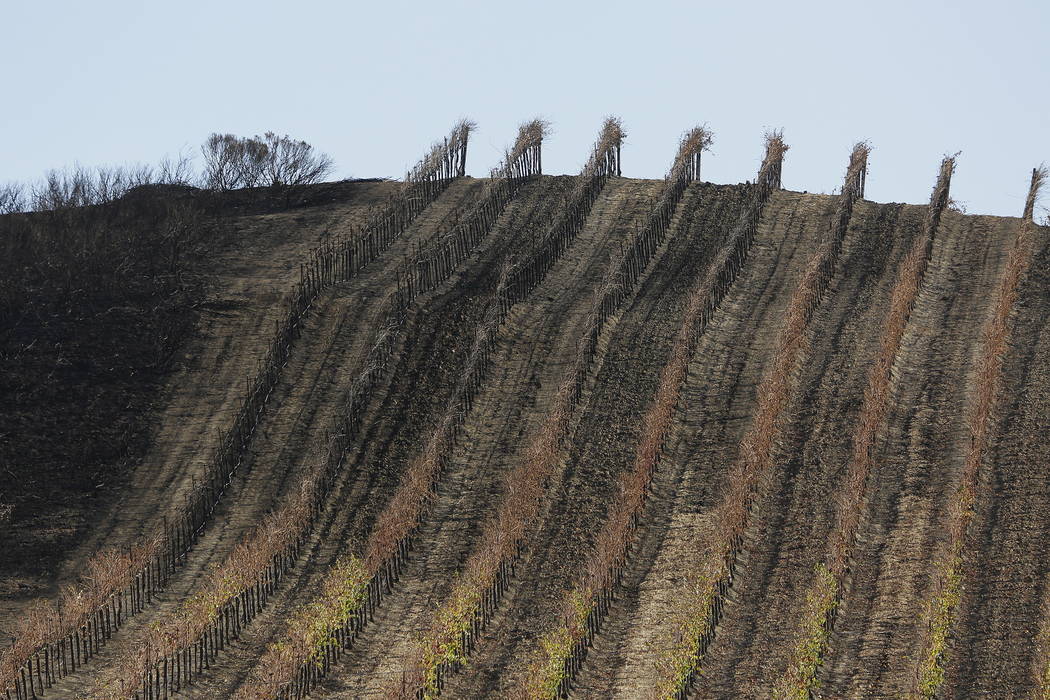 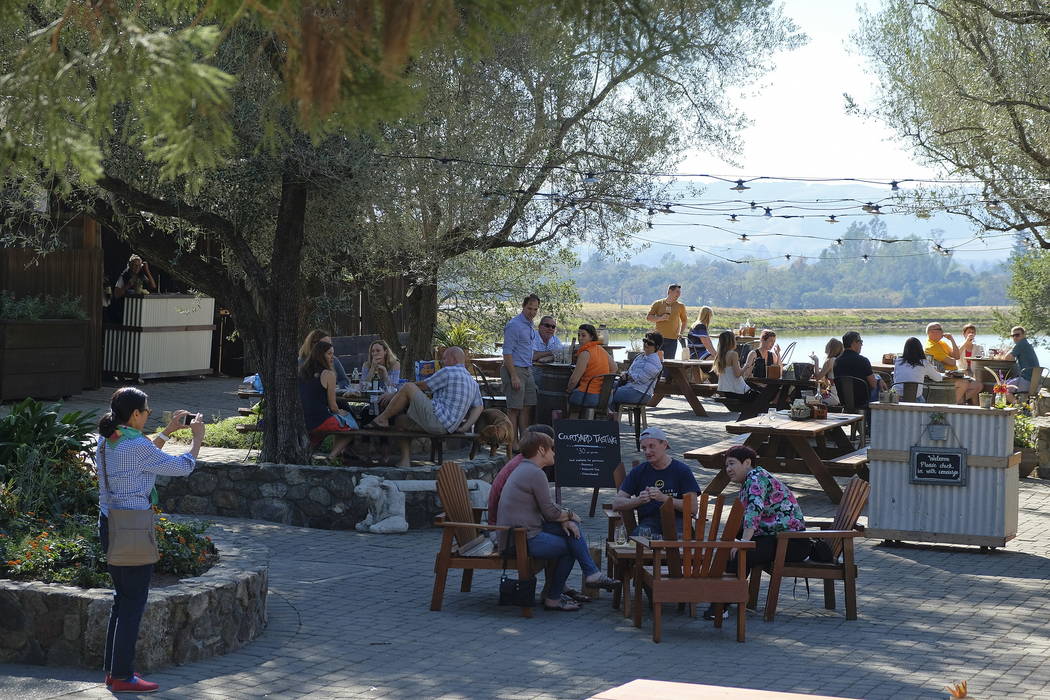 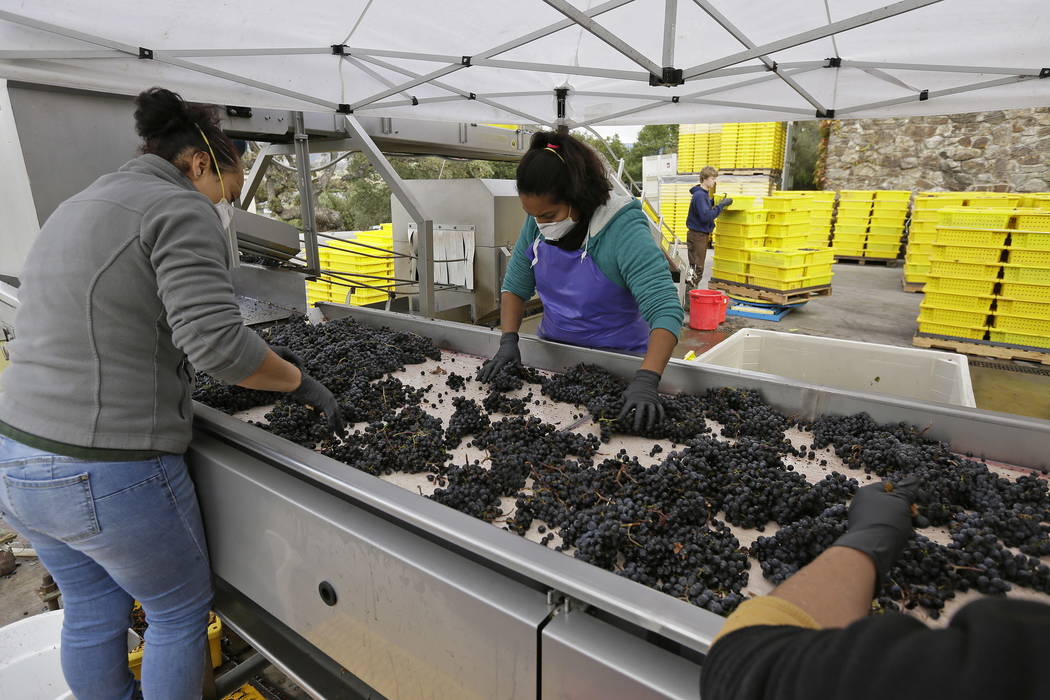 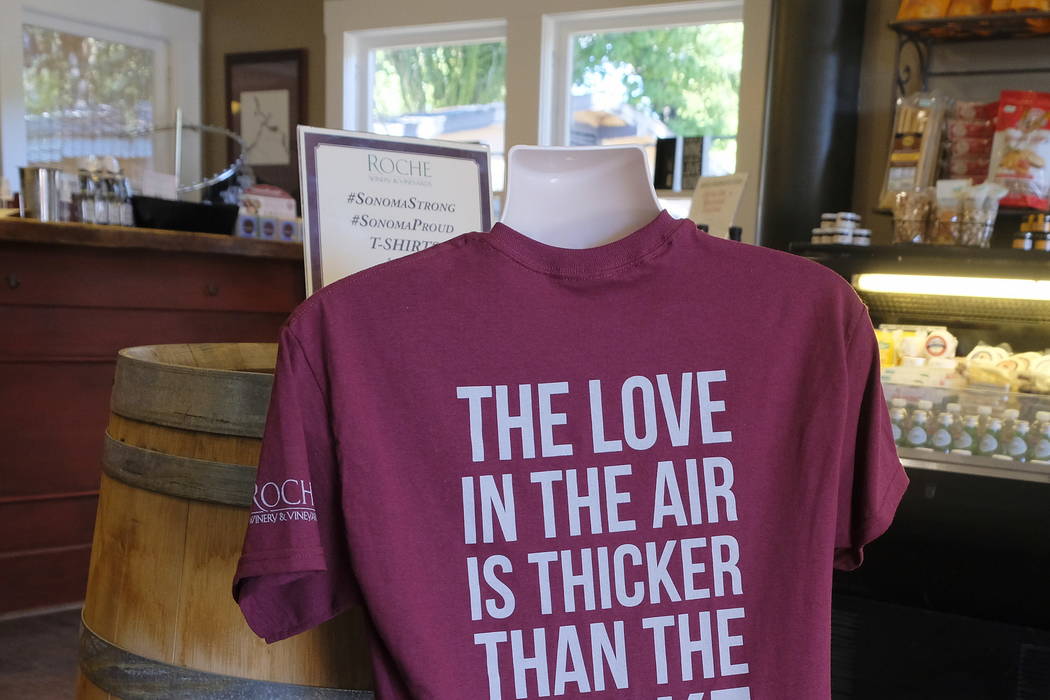 A T-shirt referencing the recent wildfires is shown for sale in the tasting room at Roche Winery and Vineyards in Sonoma, Calif., last month. (AP Photo/Eric Risberg)

NAPA, Calif. — A month after deadly wildfires swept through California’s famed wine country, hot-air balloons are floating again over Napa Valley vineyards splashed with fall colors. On the heels of the disaster, a new winery is opening, keeping the name it chose some time ago: Ashes and Diamonds.

The fires had only a minimal effect on the area’s wineries, according to the Wine Institute, an advocacy and policy group. Of the 1,200 wineries in Sonoma, Napa and Mendocino, about 10 were destroyed or heavily damaged, and 90 percent of this year’s harvest already was complete, the institute said.

Most vineyards were spared due to their high moisture content, and some even helped save surrounding structures by acting as fire breaks.

But many operators are now grappling with other long-term effects from the fires that killed 43 people and wiped out 8,900 buildings: making up for losses from being closed at the busiest time of year, assessing the impact of smoke and other environmental damage on this year’s vintage, and persuading tourists to return after weeks of news coverage of the fires’ devastation.

One of the most graphic scenes of destruction to emerge was that of the Signorello Estate winery engulfed in flames. Lost in the fire was the Napa winery’s signature stone hospitality building. A kitchen, corporate offices, a wine lab and owner Ray Signorello Jr.’s home also were destroyed.

“We lost all our servers, systems, computers, the things we used to do business,” Signorello said. But he plans to rebuild and says he’s “trying to get people back to work.”

At Cardinale Winery in Oakville, where just one Cabernet Sauvignon vintage is made from prized mountain appellations each year, winemaker Chris Carpenter is eyeing the grapes cautiously. He was a rare winemaker willing to say the fires’ effects would be felt for years, noting there also will be environmental issues to contend with.

Only 50 percent of Cardinale’s harvest was finished when the fires erupted, and he’s worried about smoke tainting what remains.

“All the questions are unknown right now, and we hope to have a handle on that after fermentation,” Carpenter said.

Carpenter said he had a chance to try some smoke-tainted wines in 2008, and they were not very pleasant – like a bacon-flavored wine.

Things already appeared to be returning to normal for guests at Sonoma’s Gundlach Bundschu winery, where dozens of tourists soaked up the sun outside the tasting room a few weeks after the fires. Nearby blackened hills were the only visible reminder of what recently occurred.

The winery celebrated its reopening with a community party that raised $16,000 for a fund to help fire victims, said sixth-generation vintner Katie Bundschu, who oversees marketing and sales.

“It was a place to come and give each other hugs,” said Bundschu, whose own family has been dealing with the loss of her parents’ home.

Now the push is on to lure visitors back to the three counties, which together saw more than $3.7 billion in tourism spending in 2016.

Wineries are filling the pages of the San Francisco Chronicle with ads. “We are open and welcome you back to Napa!” read one. Some are donating their tasting room fees to wildfire relief charities.

The state’s tourism commission, Visit California, is spending $2 million on an advertising campaign to encourage visitors to return.

“Tourism is the wine country’s lifeblood,” said president and CEO Caroline Beteta. If the groups hosting fundraisers spread their goodwill across the region, she said, “I think they will be back and running and be able to host the world as they were before.”

Once people understand everything is not burned down, tourism will return within a few months, said Eric Luse, the winemaker and owner of Eric Ross Winery in Glen Ellen.

Standing outside his empty tasting room and looking at passing cars, he mused, “If you’re not optimistic, you are in the wrong business.”