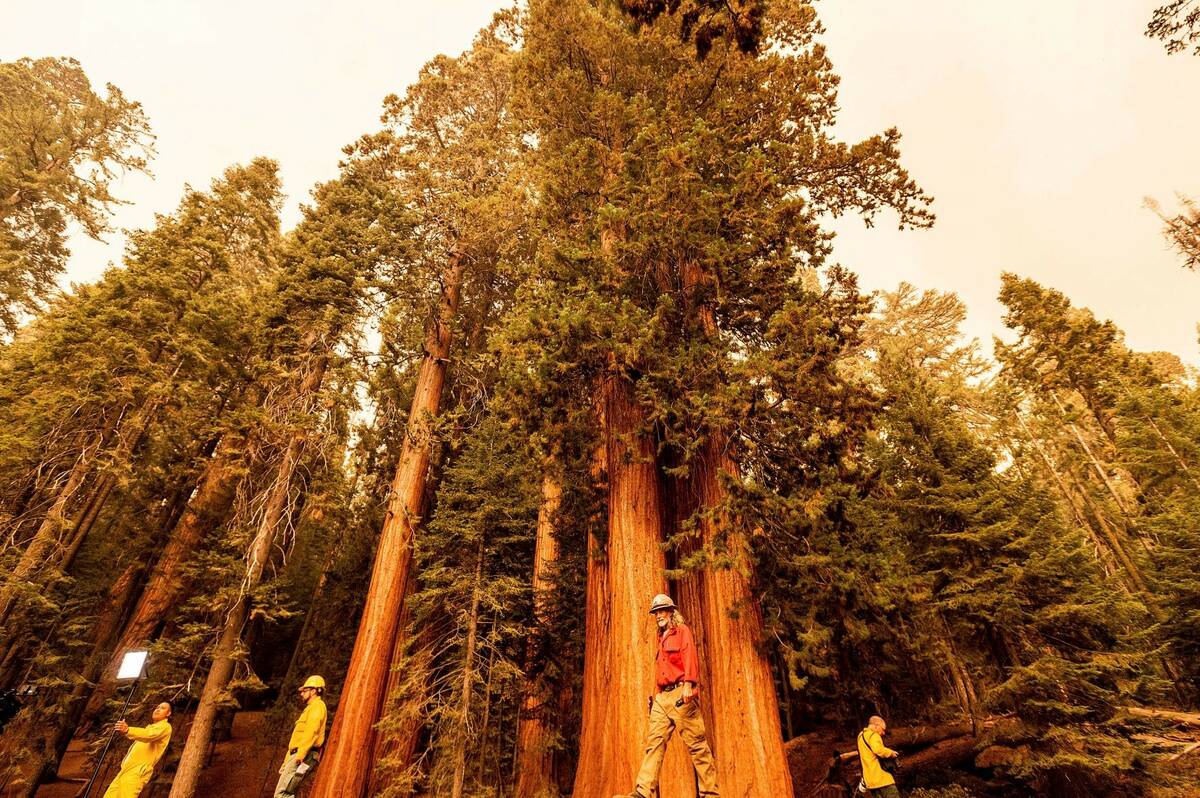 Members of the media walk among sequoia trees in Lost Grove as the KNP Complex Fire burns about 15 miles away on Friday, Sept. 17, 2021, in Sequoia National Park, Calif. (AP Photo/Noah Berger) 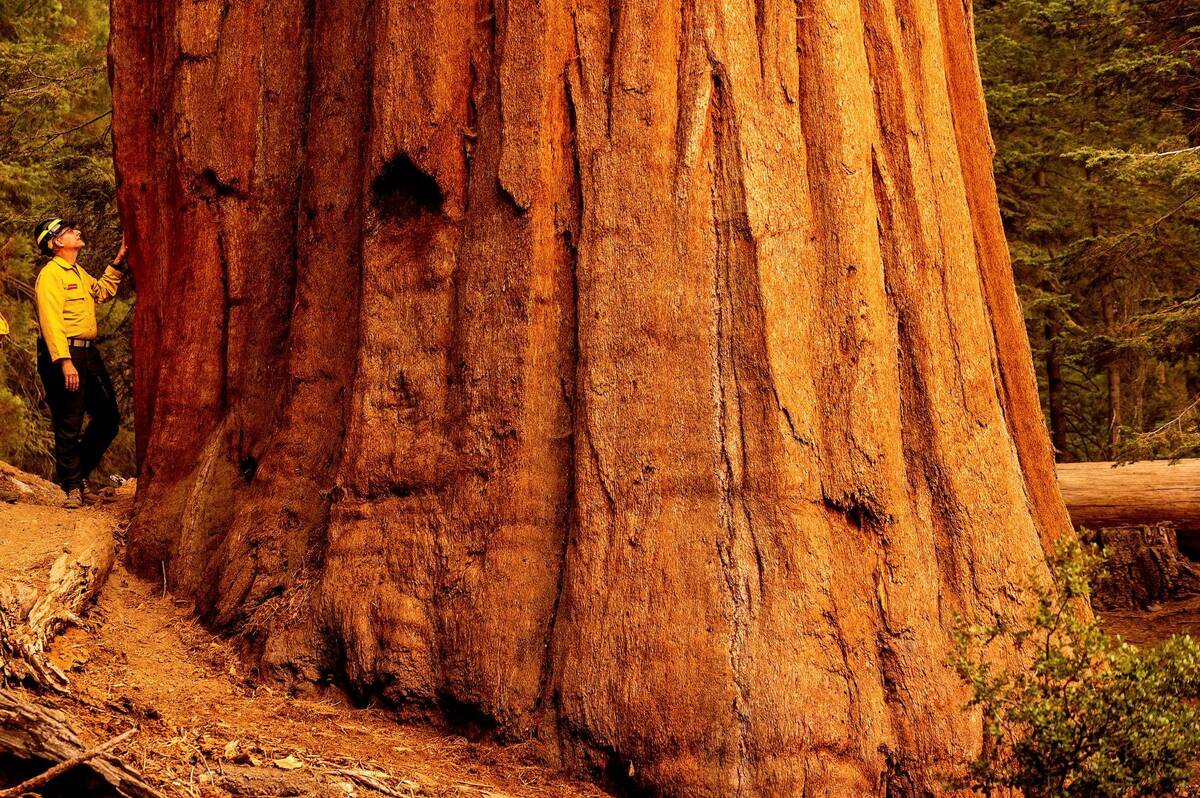 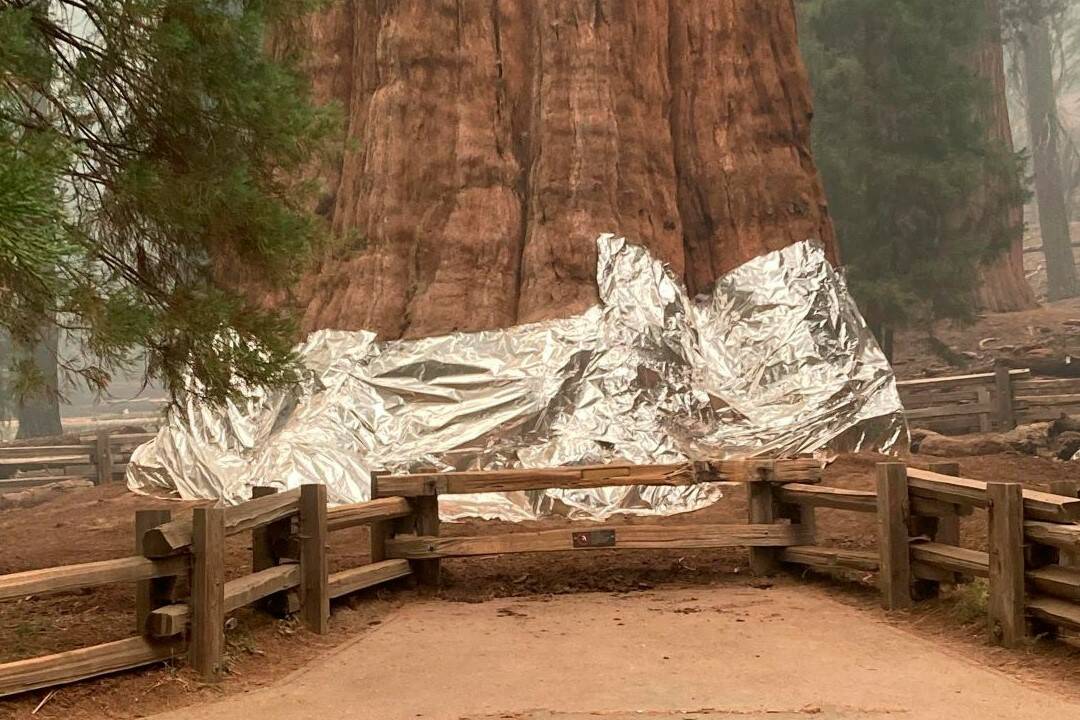 This photo shows the giant sequoia known as the General Sherman Tree with its base wrapped in a fire-resistant blanket to protect it from the intense heat of approaching wildfires at Sequoia National Forest in California. (Southern Area Blue Incident Management Team via AP) 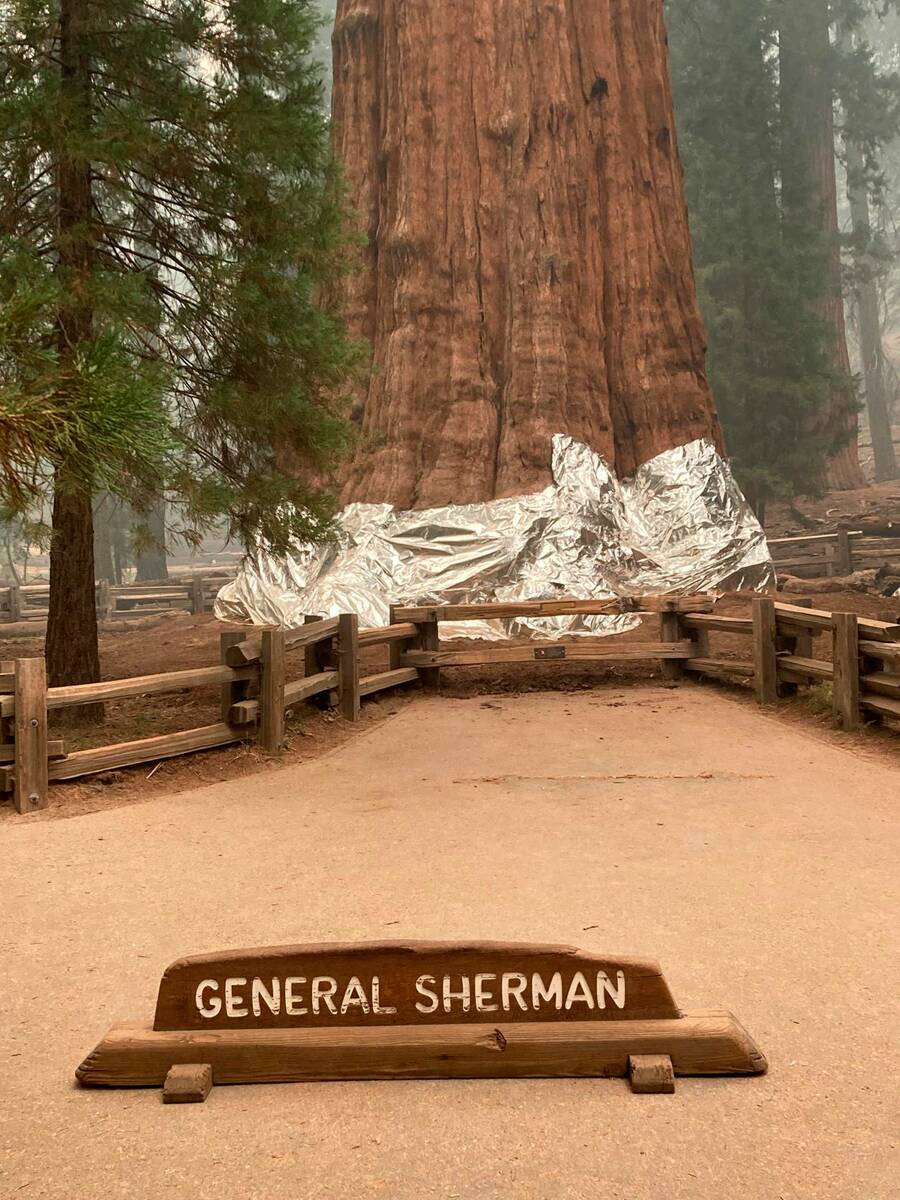 This photo shows the giant sequoia known as the General Sherman Tree with its base wrapped in a fire-resistant blanket to protect it from the intense heat of approaching wildfires at Sequoia National Forest in California. (Southern Area Blue Incident Management Team via AP)

THREE RIVERS, Calif. — California wildfires have burned into at least four groves of gigantic ancient sequoias in national parks and forests, though cooler weather on Friday helped crews trying to keep the flames away from a famous cluster containing the world’s largest tree.

The fires lapped into the groves with trees that can be up to 200 feet tall and 2,000 years old, including Oriole Lake Grove in Sequoia National Park and Peyrone North and South groves in the neighboring Sequoia National Forest.

The fire also had reached the forest’s Long Meadow Grove, where then-President Bill Clinton signed a proclamation two decades ago establishing a national monument. Fire officials haven’t yet been able to determine how much damage was done to the groves, which are in remote, hard-to-reach areas.

“These groves are just as impressive and just as ecologically important to the forest. They just aren’t as well-known,” Tim Borden, sequoia restoration and stewardship manager for the Save the Redwoods League, told the Bay Area News Group. “My heart sinks when I think about it.”

Flames were still about a mile from the famed Giant Forest, where some 2,000 massive sequoias grow on a plateau high in the mountains of the national park.

Firefighters have placed special aluminum wrapping around the base of the General Sherman Tree, the world’s largest by volume at 52,508 cubic feet, as well as some other sequoias and buildings.

The material can withstand intensive heat for short periods and has been used in national parks and forests for several years throughout the West to protect sensitive structures from flames.

Lower temperatures and a layer of smoke blanketing the area have been a benefit by helping suppress the flames. “It’s been slow growth,” fire information officer Katy Hooper said.

A major element of the groves’ defense is decades of prescribed burns — fires intentionally set to clear the forest floor of vegetation that could feed bigger blazes — and thinning projects to remove small trees that could become ladders carrying fire up to the crowns of the giants.

The tactic was no match for a fire in the region last year that killed thousands of sequoias, which grow as tall as high-rises at certain elevations on the western slope of the Sierra Nevada.

A historic drought tied to climate change is making wildfires harder to fight. Scientists say climate change has made the West much warmer and drier in the past 30 years and will continue to make weather more extreme and wildfires more frequent and destructive.

Lightning ignited two fires in the park on Sept. 9, officials said. The Colony Fire, closest to the Giant Forest, has grown to just under 5 square miles. The Paradise Fire has scorched nearly 13 square miles.

More than 400 firefighters were assigned to the blazes, which are being collectively managed as the KNP Complex. More resources have been requested, Hooper said.

To the south, the Windy Fire grew to nearly 11 square miles on the Tule River Indian Reservation and in Giant Sequoia National Monument, where it has burned into one grove of sequoias and threatens others. Difficult terrain has prevented officials from assessing damage to the big trees.

Sequoia National Park is the second natural jewel to be threatened by wildfires in less than a month.

Lake Tahoe, the blue alpine lake perched high in the mountains on the California-Nevada line, was threatened by the explosive Caldor Fire until firefighters stopped its destructive march. Containment there has reached 71%.

Meanwhile, a big change in weather was taking shape in parts of the drought-stricken, fire-scarred West.

Forecasters said a storm heading in from the Pacific would bring rain to the Pacific Northwest and parts of Northern California through the weekend. The rain was not expected to come as far south as Sequoia National Park.