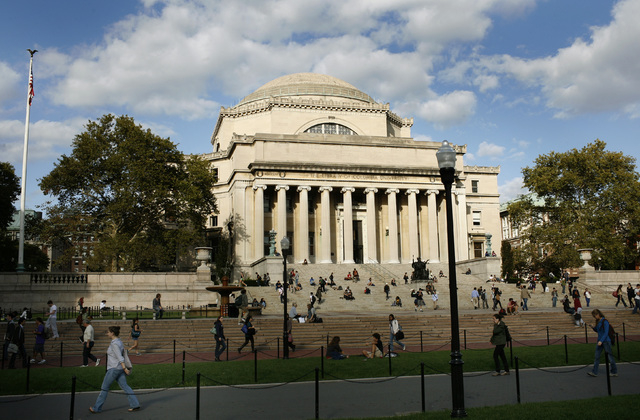 Sulkowicz, 22, became known from her visual arts thesis project, where she carried a mattress with her on campus to represent the burden sexual assault victims carry and as a protest against Columbia for how they handled her case, according to TIME. She says she was raped in her own bed at the start of her sophomore year of college.

The posters, plastered on campus and on nearby streets, accompany a fake Twitter account, @fakerape, with the hashtag “#rapehoax.” Many posters feature Sulkowicz with her mattress or Dunham, who has spoken out frequently about her experiences with sexual assault.

Passersby have been tearing down the posters, but more and more have shown up.

Sulkowicz experience is reminiscent of many women on college campuses.

About one in six women experienced completed or attempted rape during their first year of college at one school in upstate New York, according to a new study.

The report’s lead author said the results add to existing evidence suggesting the hype surrounding campus rape is not overblown. There may even be a greater risk of rape during the first year of college, she told Reuters Health.

“We are now starting to have independent data emerge from different campuses and from different assessment settings,” said Kate Carey of the Brown University School of Public Health in Providence, Rhode Island. “They are starting to converge to support the general notion that about one in every five women in college is going to experience sexual assault.”

For the new study, the researchers recruited first-year women aged 18 to 21 years old with the help of mailings, flyers, word of mouth and existing research pools.

Women completed a questionnaire when they first enrolled in the study and again every four months to determine how often they experienced attempted or completed rape through force or incapacitation by alcohol or drugs.

Overall, 483 women – or 26% of women in the freshman class – completed the study, which was published in the Journal of Adolescent Health

In all, the researchers point out that by the start of sophomore year, 37% of the young women had experienced one of these forms of sexual assault.

“We knew that sexual assault is typically under reported and some of our big studies that report national crime statistics tend to reveal lower rates than some of the college specific assessments,” Carey said. “I was a bit surprised by both the estimates the participants gave us for pre-college experience of completed and attempted rape and the prevalence during the first year.”

One expert who wasn’t involved in the new study said its findings are confirmation that this problem of rape and sexual assault exists at many colleges.

“It’s confirmation that many studies are finding rates that are very troubling,” said Christopher Krebs, who investigates the topic as a senior research social scientist at RTI International in Research Triangle Park, North Carolina.

But it’s often difficult to compare numbers from one study on campus rape to others, he said.

For example, studies may measure sexual assaults, which would include encounters in addition to rape.

“Their measure is a much more serious measure, and their numbers are a bit higher than what we found in our research,” Krebs said.

Carey said the type of questions women were asked may have resulted in additional rapes being tallied. Also, the women may have been more willing to report rapes since they may have felt comfortable with the researchers after a year.

“What we’re getting is more and more studies that are being done that are finding rates at individual schools that are troubling,” Krebs said.

Kristen DeSilva contributed to this report.